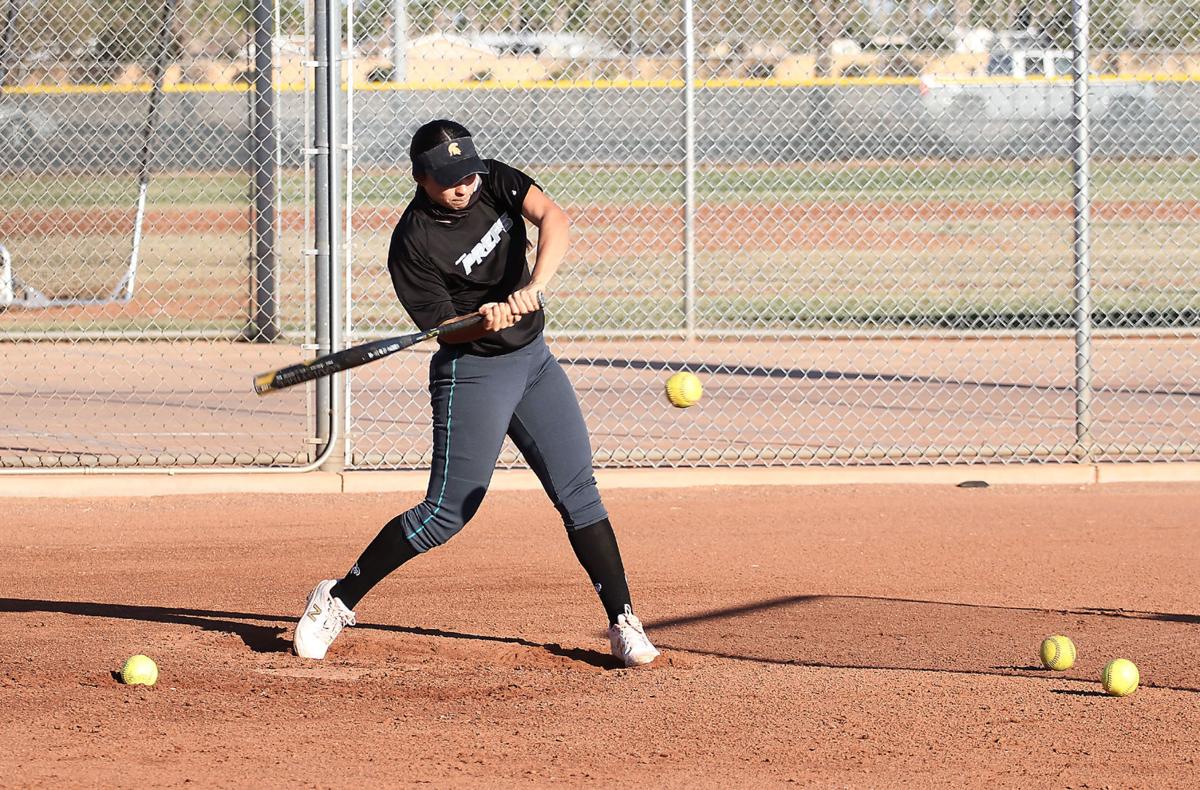 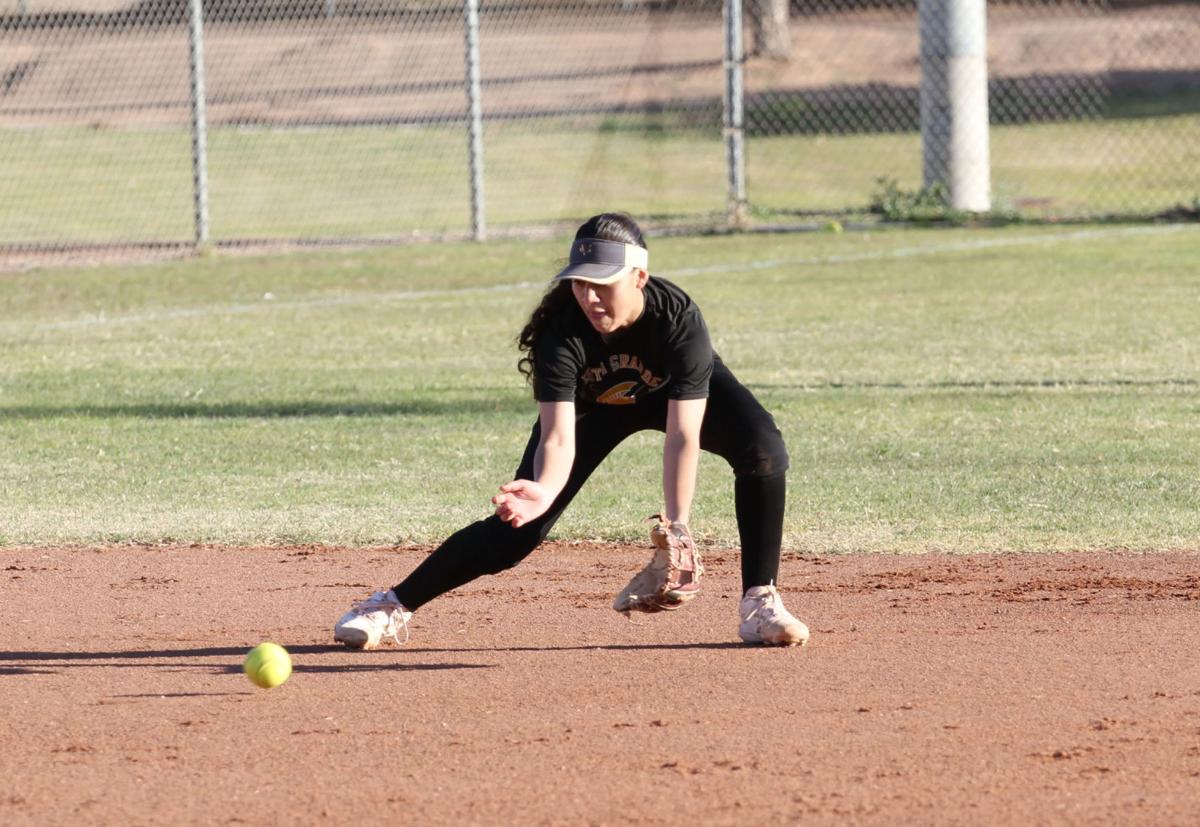 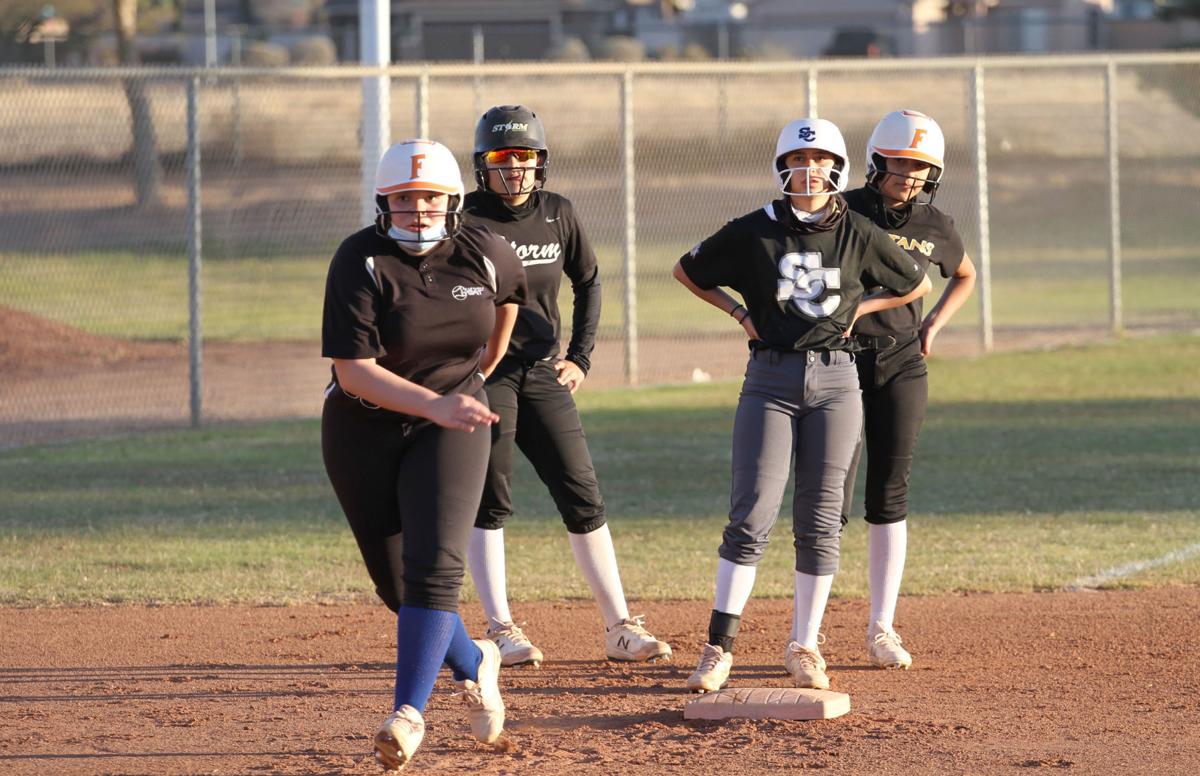 Vista Grande's Adacelli Archuleta leads off a group of baserunners during Tuesday's practice in Casa Grande.

Vista Grande's Adacelli Archuleta leads off a group of baserunners during Tuesday's practice in Casa Grande.

CASA GRANDE — In 2019, the Vista Grande softball team was on the cusp of reaching the semifinals in the 4A state playoffs. It was destined for another deep postseason run last year until the season was canceled due to COVID-19.

This season, the Spartans are one of the most well-rounded teams in Pinal County as they return all of their top playmakers and should be in the hunt for the state title this year.

“I’m setting high expectations along with the girls,” Vista Grande coach Rudy Valenzuela said. “I’m expecting to make the playoffs. For the season itself, I like to tell the girls, we go one game at a time. If you practice hard at practice, that’s going to carry over to our game situations. Last year we were 9-2, and they shut it down. My expectation is to go to state and try to go as far as we can.”

It’s sometimes difficult to measure how good a team really is when its schedule is full of low-quality opponents such as Scottsdale Coronado, Phoenix Cortez, Rio Rico and American Leadership Academy-Ironwood, which combined for nine wins in the 2019 season.

The Spartans did manage to snag a game against Tucson Sahuaro, Tucson Salpointe Catholic and Oro Valley Canyon Del Oro.

Like many coaches, Valenzuela wants his team to be battle-tested once the playoffs start and the competition kicks up a notch.

The Spartans already crossed off one of those opponents in their season opener against Sahuaro last week, in a come-from-behind 5-2 win.

Their star ace, Alyssa Tinnin, came through in the circle and in the batter’s box, as she tossed a complete game with 12 strikeouts, two walks and three hits.

Vista Grande trailed 2-1 in the sixth when Tinnin smacked a double with the bases loaded to take the 4-2 lead.

The junior will look to continue improving her already impressive career stat line of 292 strikeouts and a 2.05 ERA in 211 1/3 innings pitched.

“She’s a pitcher that’s determined,” Valenzuela said. “She wants to be the best, and I think pitching-wise she’ll be coming out a lot stronger than what she did last year. She knows that she has a defense that can back her up, she has a lot of tools. Even on the offseason, she’s working to make herself a better pitcher and she’s been working with her stick.”

Tinnin won’t carry the full pitching load this year, as Valenzuela will look to throw Bri Jorgensen into the mix against some of those struggling opponents.

“Alyssa will probably be (handling) a good 90% of the pitching, but if we’re playing a weaker team, (we’ll) give Bri the opportunity,” Valenzuela said. “If Bri falters or whatever, we still have Amyah Boostedt that can pitch.”

Boostedt and Selena Perez provide a lockdown defense up the middle for Vista Grande and are a constant threat in the batter’s box.

Boostedt, who signed with Southern Utah University, hit .600 with 12 RBIs and 10 extra base hits and had a 1.066 slugging percentage in the 11 games the Spartans managed to squeeze in last year.

Perez matched her with 12 RBIs and two home runs while batting .419.

The Spartans have a speedy outfield with senior Brooklyn Flores and Jorgensen, as well as junior Ashlyn Dela Cruz.

There are also two freshmen on the squad in Julissa Jauregui and Brooklyn Sabori.

“I’ve got a good, strong core of young ladies here,” Valenzuela said. “They really believe that they can go far.”