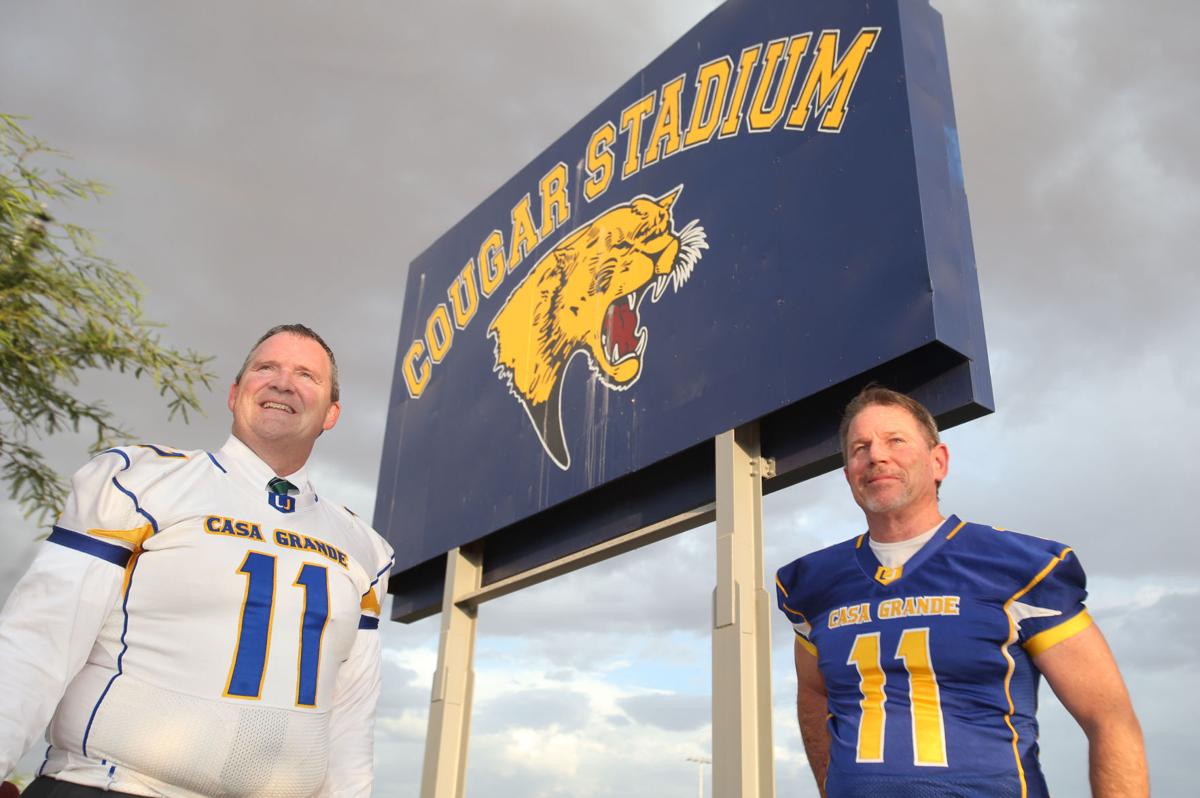 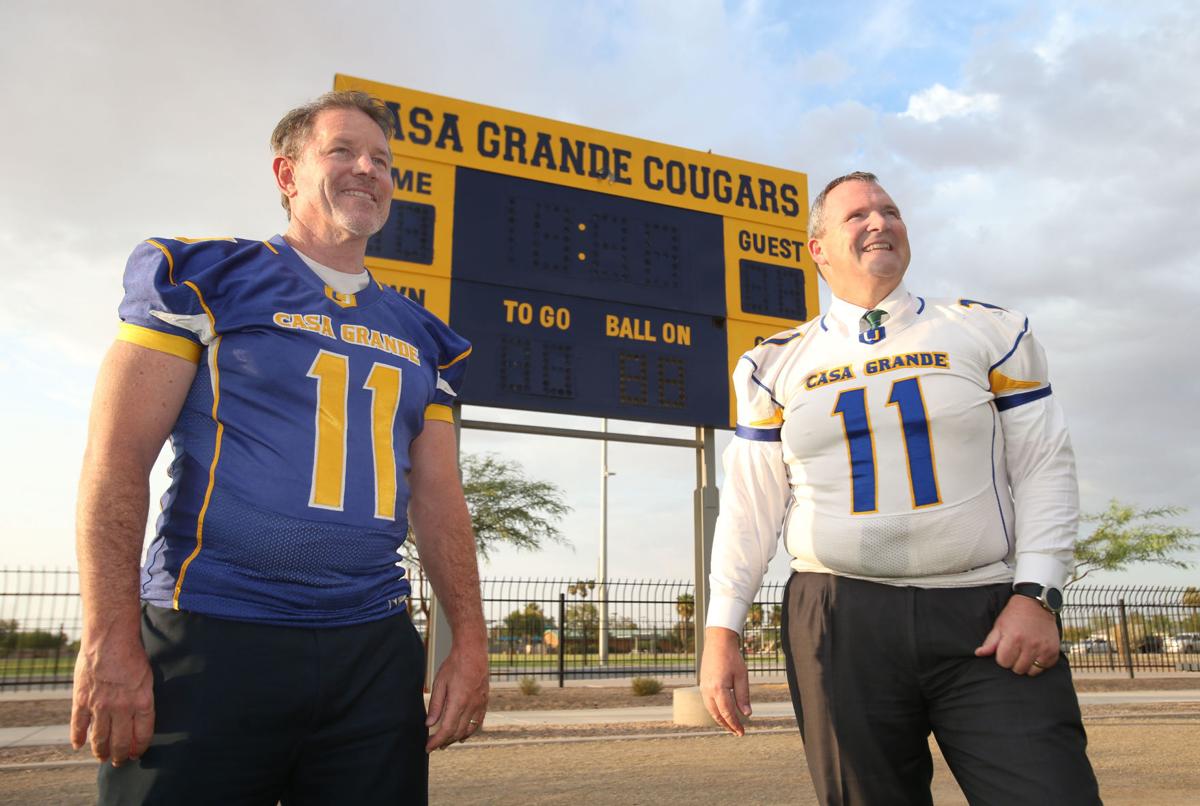 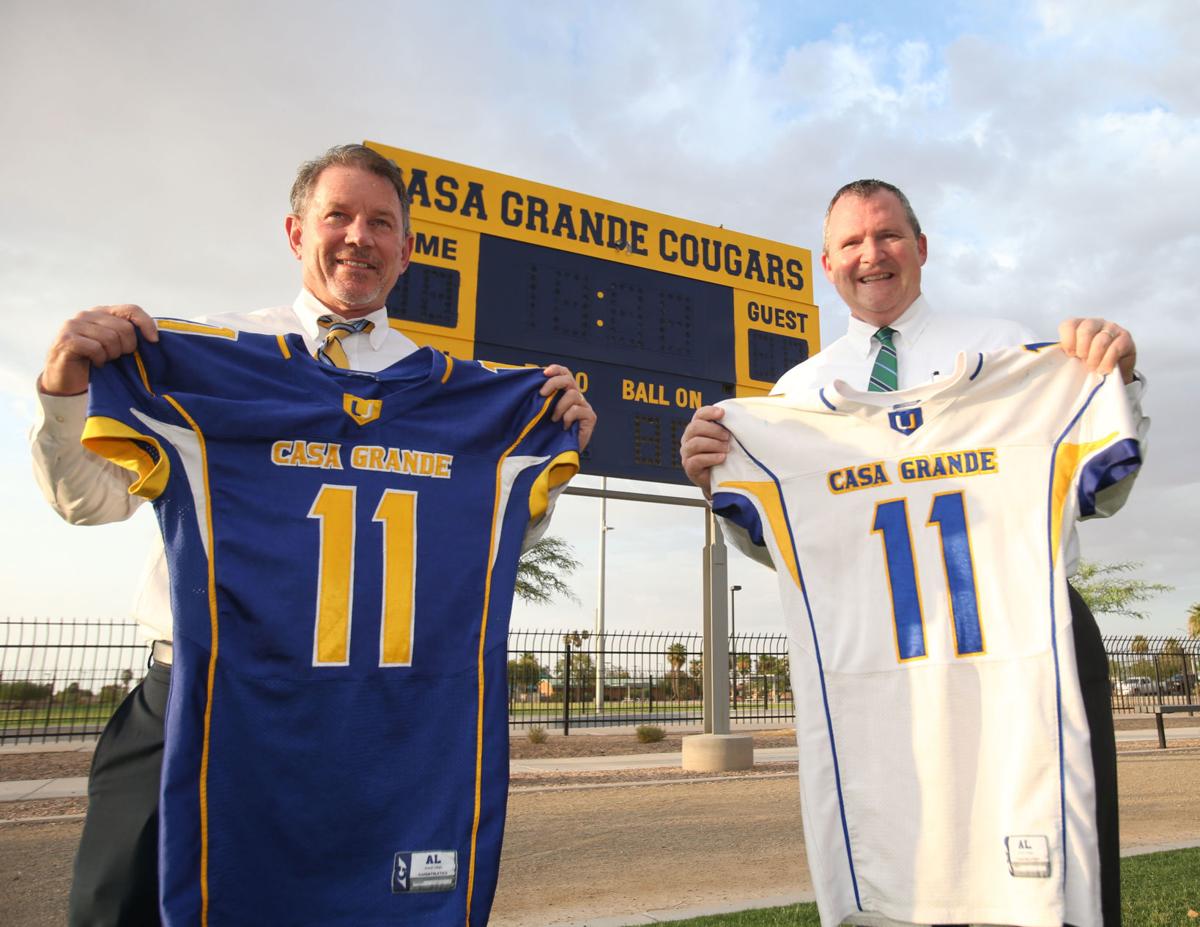 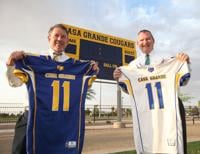 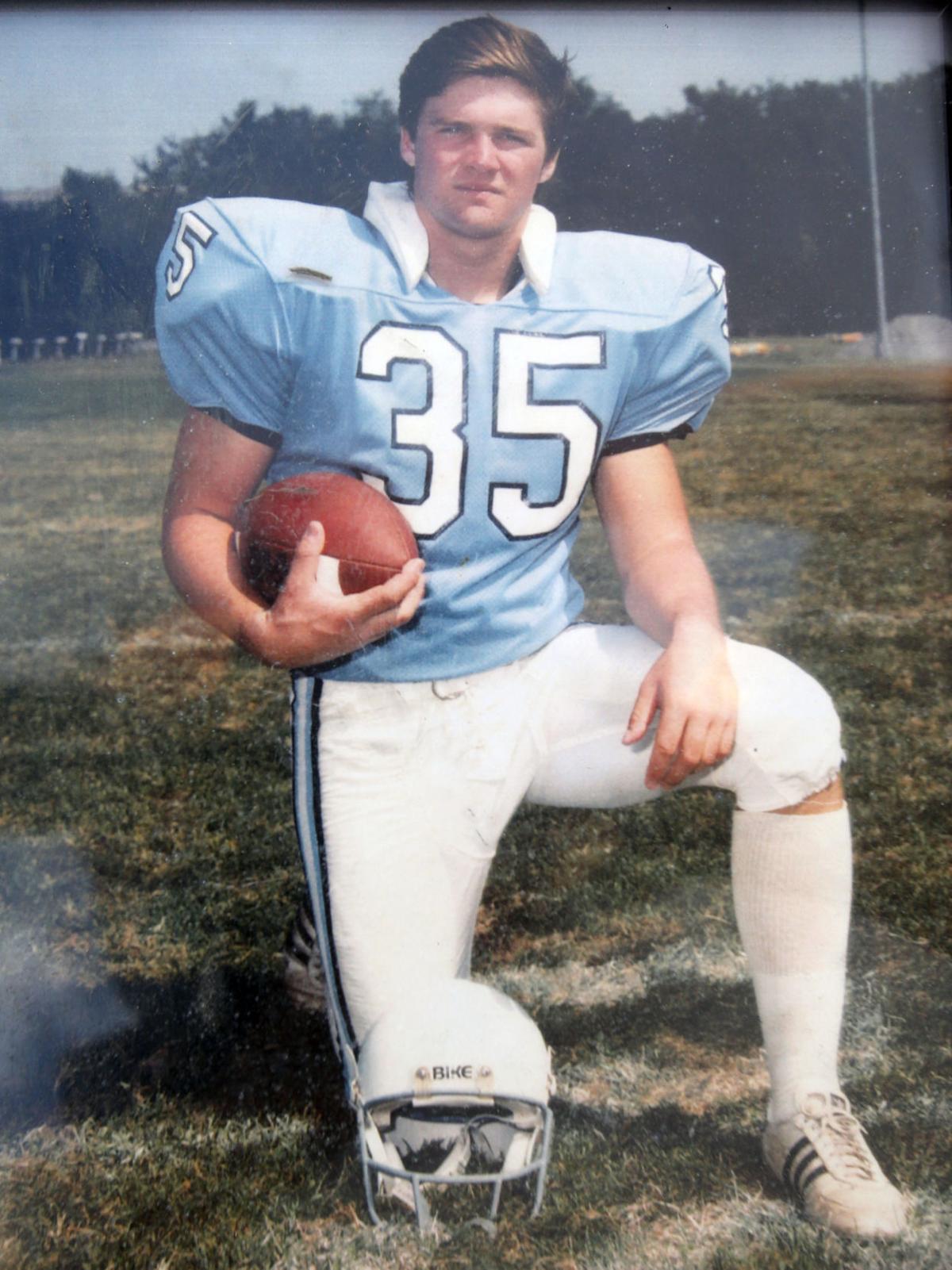 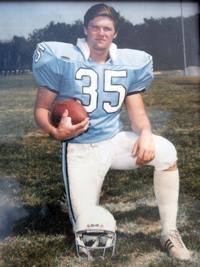 Kevin White, quarterback for West Virginia University, with the Most Valuable Player award he won for leading the Mountaineers to a 31-14 victory over TCU in the Bluebonnet Bowl New Year's Eve. 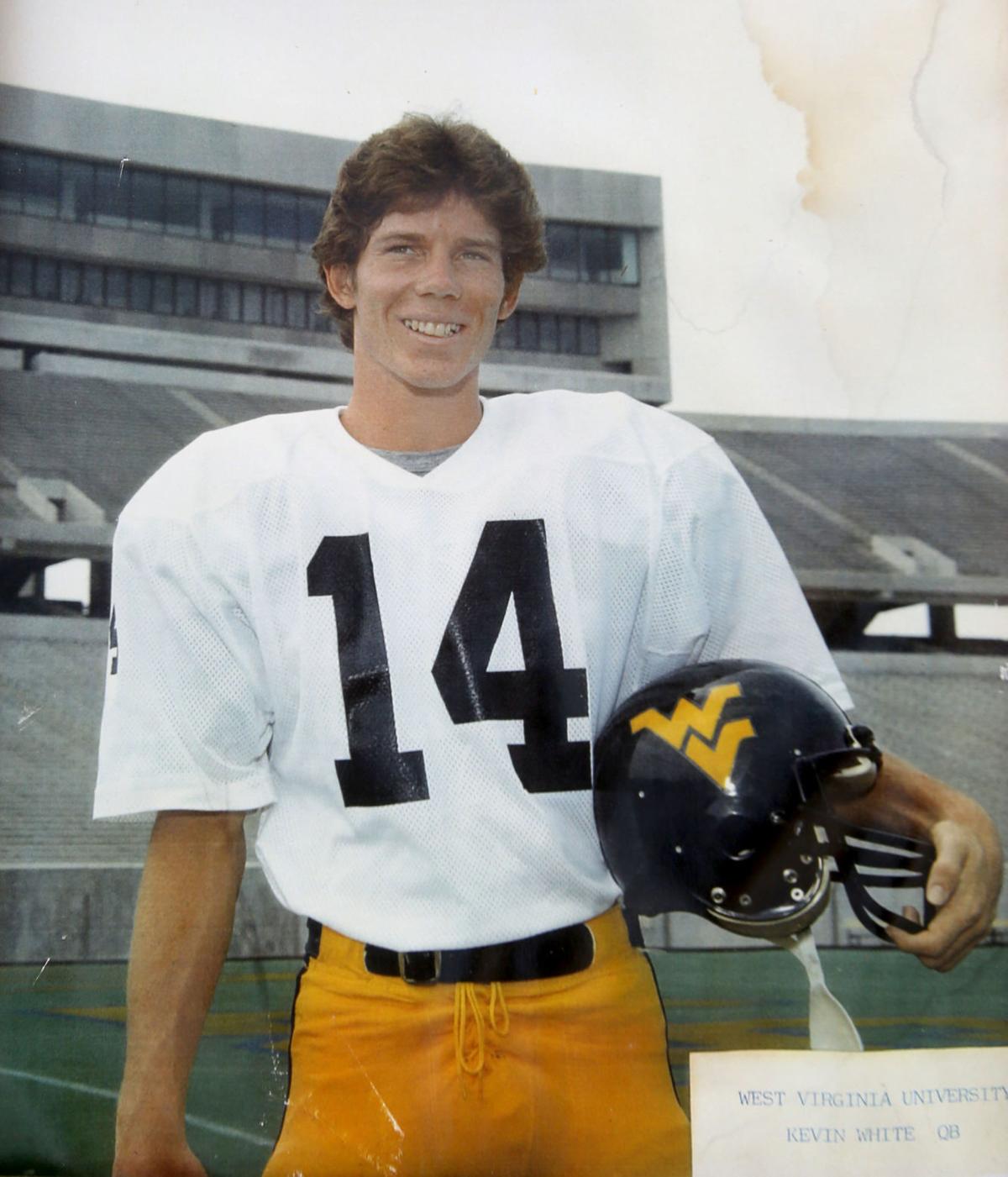 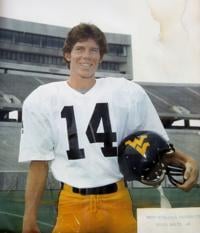 Kevin White during his days as quarterback for West Virginia.

Kevin White, quarterback for West Virginia University, with the Most Valuable Player award he won for leading the Mountaineers to a 31-14 victory over TCU in the Bluebonnet Bowl New Year's Eve.

Kevin White during his days as quarterback for West Virginia.

CASA GRANDE — Who could have imagined that a friendship forged in elementary school nearly 50 years ago would result in remarkably similar life paths for Kevin White and Denis Fitzgibbons?

Both went on to start at quarterback for Casa Grande Union High School, play college football at the NCAA Division I level and earn a law degree from Arizona State University.

White, 57, has been a Pinal County Superior Court judge since 2002. He was born in Casa Grande at long-since demolished Hoemako Hospital. Fitzgibbons’ family moved from Iowa to Casa Grande the summer before Denis, 56, began fifth grade at St. Anthony Catholic School.

Fitzgibbons is an attorney at Fitzgibbons Law Offices and recently was elected president of the State Bar of Arizona, which has about 18,500 members.

White and Fitzgibbons first hooked up on the baseball field. St. Anthony did not have a team, but the school worked out an agreement with Evergreen Elementary to let their kids band together. White was a sixth-grader at Evergreen.

After that, the two would often cross paths in Little League baseball and Pop Warner football.

White was the quarterback as a junior in 1979 and a senior in 1980. Fitzgibbons took over the reins as a senior in 1981 following a two-year hiatus from football.

Next came the college years.

White’s career at West Virginia University was capped by his MVP performance in the Dec. 31, 1984, Bluebonnet Bowl, in which he threw for career highs of 280 yards and three touchdowns in a 31-14 win over TCU.

Getting to that game in Houston's Astrodome was quite the journey. On Oct. 20, the Mountaineers upset Doug Flutie and then-No. 4 Boston College 21-20. Flutie won the Heisman Trophy that year.

The next week, WVU snapped a monstrous losing streak against Penn State, winning 17-14. The Mountaineers had not defeated the Nittany Lions since 1955, going 0-27-1 during that stretch.

Fitzgibbons turned down offers from the U.S. Military Academy and Colgate to attend Columbia, a New York City Ivy League institution located in northern Manhattan. Fitzgibbons played football for three years before he made the decision to concentrate full bore on academics. At that time, Columbia was in the early stages of a horrendous 44-game losing streak. Its band played the “Mickey Mouse March” instead of the school’s traditional fight song during the midst of that skid.

White recalled a similar group insult he and his fellow Cougars endured in 1980. CG Union got off to an 0-5 start and was held scoreless in four of those games.

“Two, four, six, eight – score before we graduate,” came the chant from the stands.

White had the last laugh, however, leading the Cougars to a 4-1 finish.

The former CG Union quarterbacks hooked up from time to time in their college years. Both recall — with relish — spending a memorable Thanksgiving in the Washington D.C. area with a former CG Union foreign exchange student pal of theirs.

As fate would have it, White and Fitzgibbons — and others, including members of the Gin Blossoms band who crashed there every now and then — resided in an off-campus house while attending Arizona State University’s law school. And for 2 1/2 years, White and Fitzgibbons were attorneys together at Fitzgibbons Law Offices, established by Denis’ dad David.

Among other topics discussed in telephone interviews with White and Fitzgibbons:

White: “I always wanted to play college football, but after my last game at Casa Grande, I believed I would never play football again. Going to West Virginia was a fairytale script for me. It was such an improbable story that ended up very well.”

White said Kashner worked tirelessly on his behalf to land him a college scholarship. At 6-feet, 167 pounds, “I was a one-star recruit,” White said. “But he believed in me. He was an incredible coach.”

White wound up being the No. 2 quarterback behind Oliver Luck as a freshman and Jeff Hostetler the next two seasons.

Luck, the father of former Indianapolis Colts QB Andrew Luck, was taken in the second round of the 1982 NFL draft by the Houston Oilers. Hostetler had a 12-year NFL career after being drafted in the third round by the New York Giants in 1984. He led the Giants to a 20-19 Super Bowl XXV victory over the Buffalo Bills after Phil Simms was injured late in the 1990 season.

Fitzgibbons: “I can’t thank [Kashner] enough. He was very good about talking to me very honestly about everything. He opened up a whole world for me.”

Fitzgibbons was a four-year basketball player but did not play football as a sophomore or a junior. Kashner convinced him to give football one more shot, telling him “you can have (college) opportunities, but [basketball] is the wrong sport.”

During the spring and summer prior to his senior year in high school, “I worked with him every day,” Fitzgibbons said.

Fitzgibbons rushed for nine touchdowns and passed for seven in 1981 as the Cougars went 4-4-2 for their just their second non-losing season in 11 years.

Advice for new generation of student-athletes

White, who also played baseball for four years at CG Union: “Talent is not enough. You need to put in a ton of work. You have to deal with bad days. You have to be resilient.

“Preparation and focus — all the little things — make the difference. It’s not just about getting the job done, but getting it done well.”

Fitzgibbons: “First and foremost, you’ve got to perform in the classroom. You need to have the discipline to budget your time and get your work done.

“You do that to get the door open and keep all the doors open.”

White: “We’re doing almost all of our hearings (with prosecutors and defense lawyers) by telephone. We’ve been presented with all kinds of challenges, but the whole court (system) has adapted very well and done a great job of making this work.

“We’ve had a few evidentiary hearings,” but due to safety concerns there has been a halt to jury trials.

Fitzgibbons, who has since recovered after contracting the virus toward the end of June: “I was in quarantine for two weeks. At first it was a (low-grade) fever, then a (dry) cough and pure exhaustion. It’s been a challenge.”

In addition to his duties as state bar president, Fitzgibbons also serves as the city attorney for Coolidge and Maricopa and as legal counsel for the Arizona City Fire District.

“I attend a lot of public meetings, but the majority of my time is spent in the office working over the phone," he said.

Apparently there is no kiddie pool for podcasting.