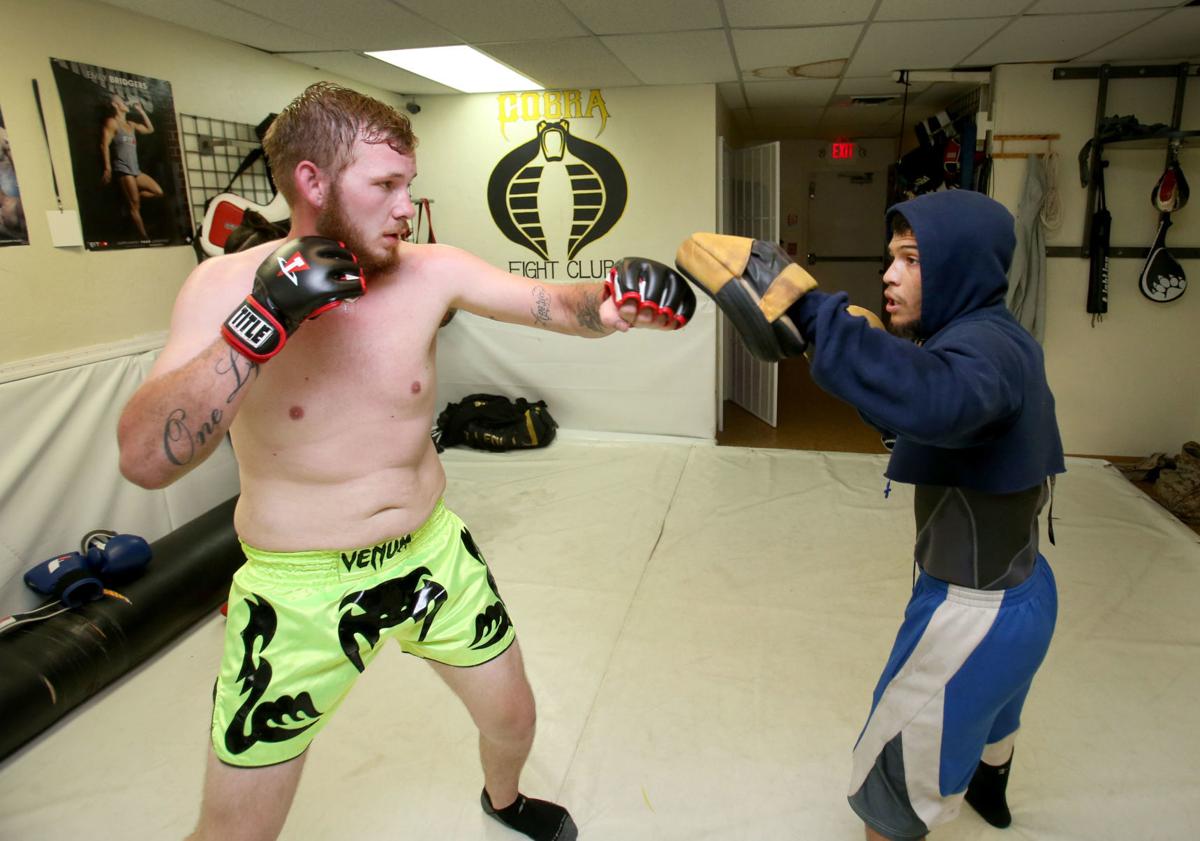 Kody Wayne, left, of Casa Grande spars with instructor Jesus Rivas on May 16 at Cobra Fight Club in Casa Grande. 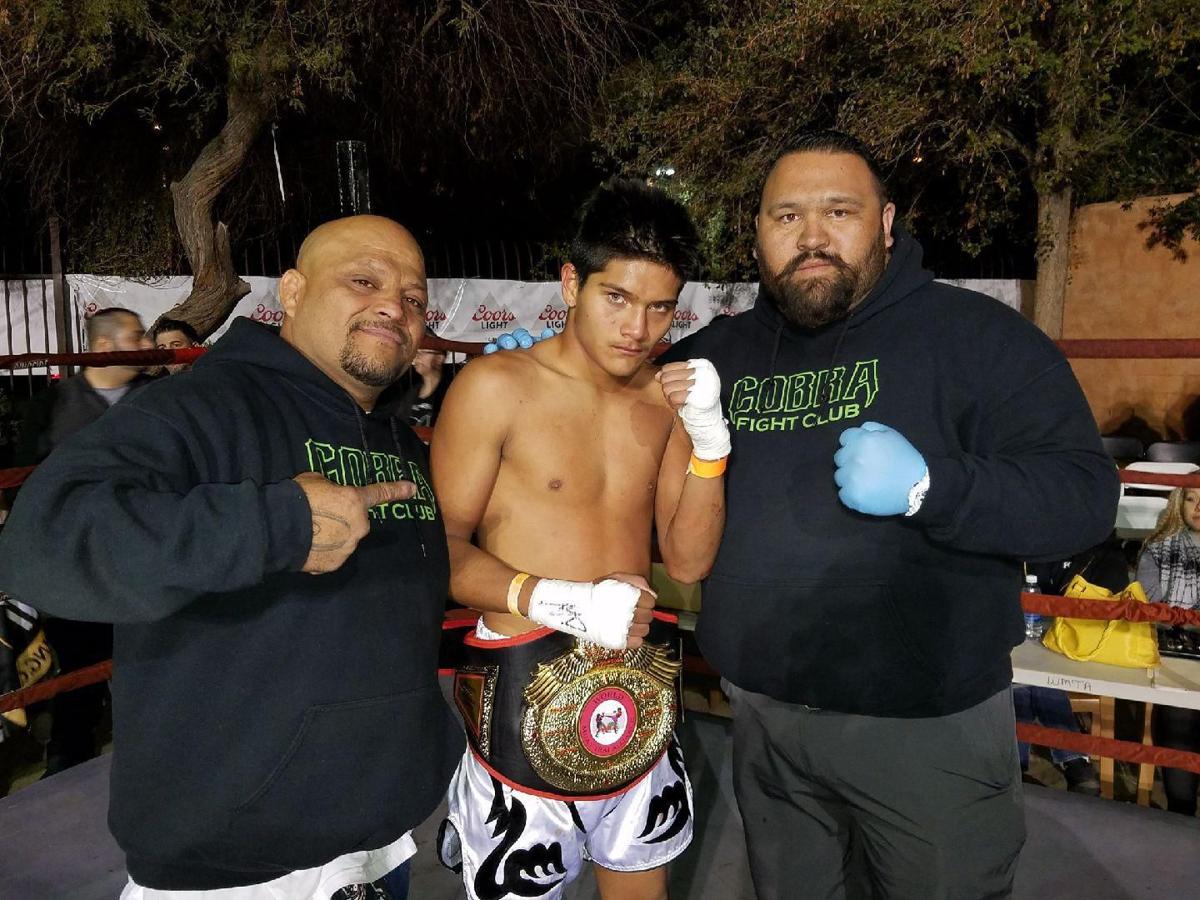 Daniel Nunes, center, poses for a picture with his coaches Gabe Rivas, left, and Armando Lucio after winning his first fight in a five-round bout. 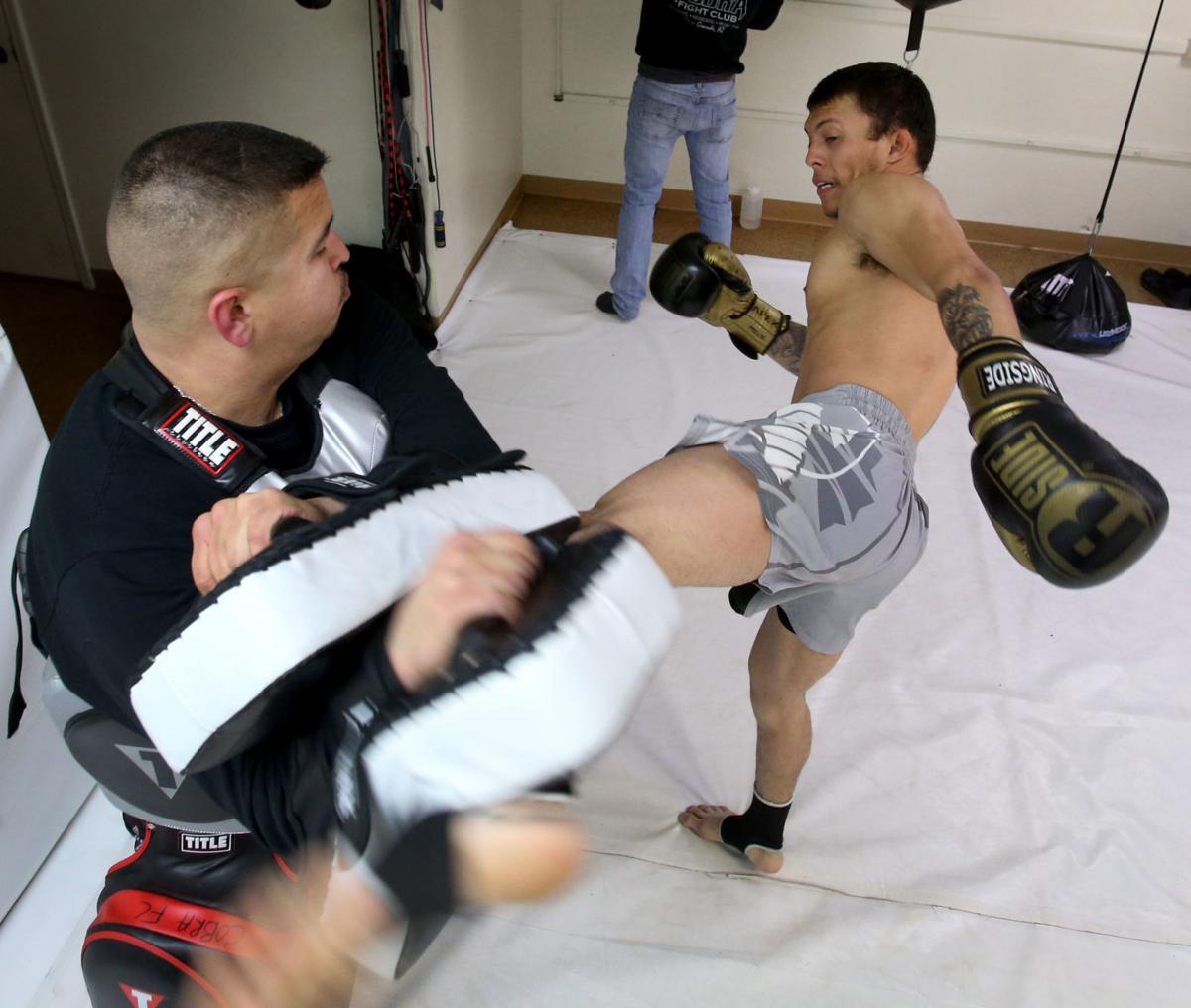 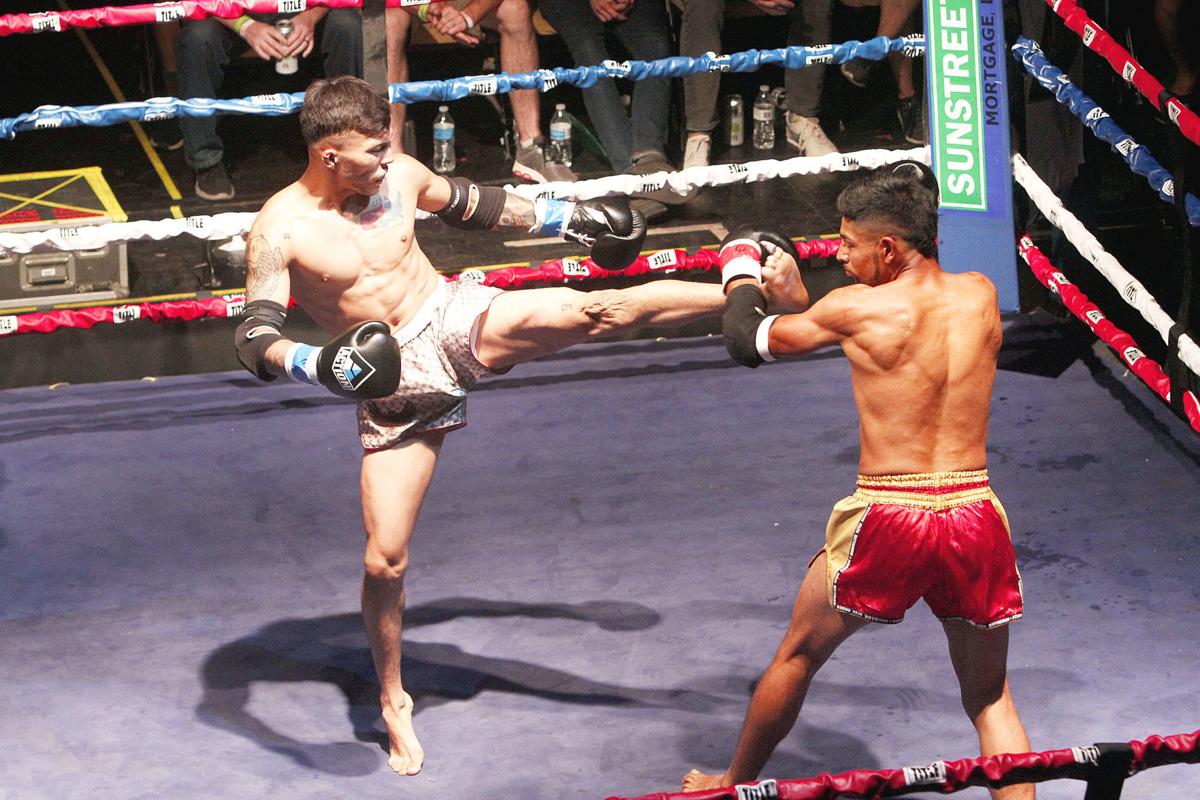 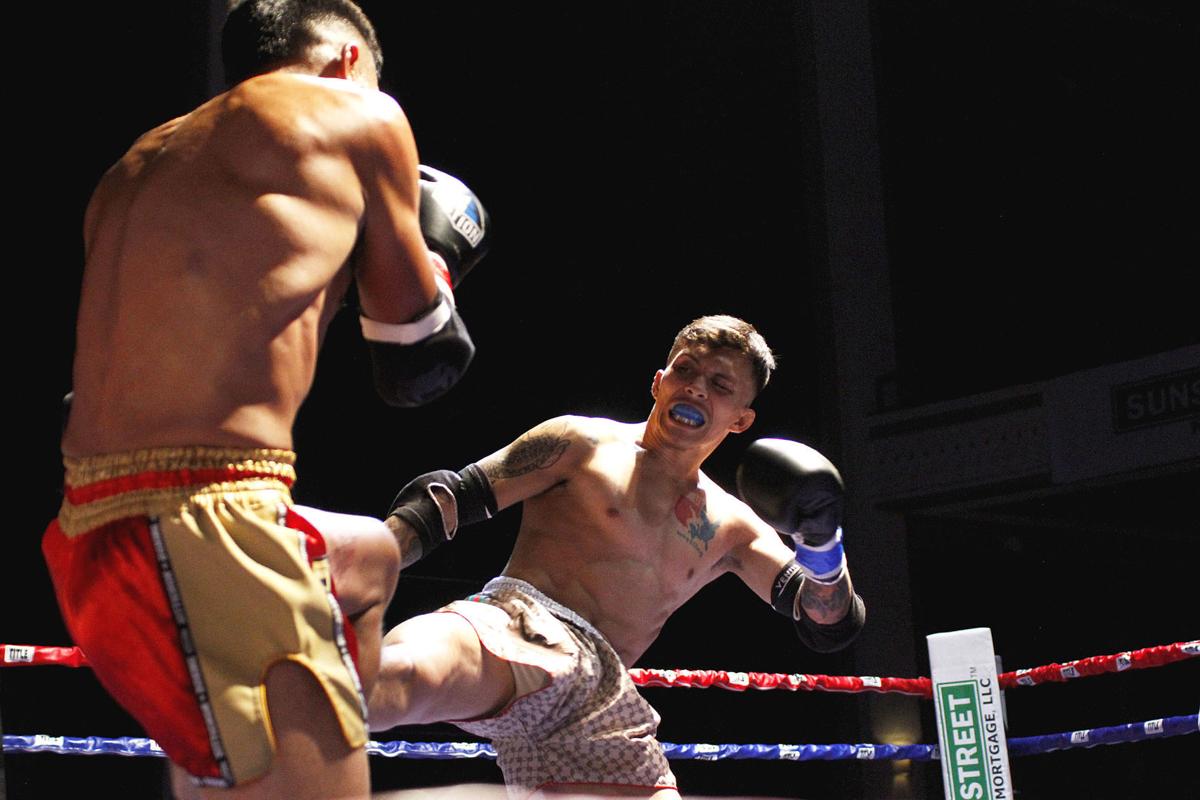 Joseph Rivas of Eloy, right, lands a leg kick against Humberto Duarte in a Flyweight title fight at a Muay Thai event July 27 at the Rialto Theatre in downtown Tucson. Rivas lost a split decision, dropping his record to 12-3.

Kody Wayne, left, of Casa Grande spars with instructor Jesus Rivas on May 16 at Cobra Fight Club in Casa Grande.

Daniel Nunes, center, poses for a picture with his coaches Gabe Rivas, left, and Armando Lucio after winning his first fight in a five-round bout.

Joseph Rivas of Eloy, right, lands a leg kick against Humberto Duarte in a Flyweight title fight at a Muay Thai event July 27 at the Rialto Theatre in downtown Tucson. Rivas lost a split decision, dropping his record to 12-3.

CASA GRANDE — Armando Lucio told a story about a 21-year-old man who had a drinking problem and was on the streets of Casa Grande.

The man had been chased three times by the police. His mother came to Lucio, pleading with him to help her son; she was at her wits’ end.

“We busted his ass for six months, and he stopped drinking,” said Lucio, who owns and operates Cobra Fight Club, a mixed martial arts gym on Florence Boulevard. “He stopped smoking weed. Now he moved to Mesa and got a job with his uncle cutting yards and now his head’s straight.”

Lucio received a call from the man a couple of months ago, thanking him for kicking his butt into gear. He reported to Lucio that he now has his own place and a car.

“That’s a payment for us. That’s what we like to hear,” Lucio said.

With the uncertainty surrounding the COVID-19 pandemic and the lasting economic impact from the shutting down of businesses, Lucio doesn’t know how long his gym will be able to stay afloat to help people like that 21-year-old man.

“We are just worried that we won’t have a place to come back to after this COVID-19,” he said. “That’s what we are worried about. It sucks. We tried to apply for different grants and we got denied. I’m still trying to get that SBA (small business administration) loan.”

Lucio has been coaching combat sports such as MMA and Brazilian jiu jitsu for the past eight years, and has operated Cobra Fight Club for four years.

During that time, he’s prided himself on providing an outlet for troubled youth and young adults — a place to find themselves. The gym has developed a positive reputation in the MMA community by sending fighters to amateur and professional title bouts.

However, with the virus outbreak gripping the country, Lucio has been forced to close his gym and hasn’t collected any gym membership dues. And with fights canceled, he hasn’t received any sponsorship money.

“We had enough money to pay the bills for two extra months, but normally what I do is keep some in reserve, but nobody paid their dues in March because nobody came in March,” he said.

Lucio added the nonprofit gym’s monthly bills are very modest in comparison to other businesses that have been hurt financially — $830 to be exact, which covers the rent and utilities for the gym located at 220 East Florence Boulevard. He and his coaches don’t take a salary and volunteer their time.

“It’s not much, but with us working full-time jobs and us taking care of our families, we try to put some money (into the gym) but it’s hard because we have to take care of our own kids,” he said.

Lucio has tried to apply for a loan through SBA programs from the recently passed stimulus, which will include a $1,200 check for Americans who qualify.

He’s had issues getting a loan, mainly because the gym has no credit.

“We’ve always had cash and we’ve never dealt with credit, which was a blessing [because] we didn’t have to have credit and pay someone back,” he said. “We’ve always been blessed that we were able to pay our bills — through selling shirts and selling tickets to our fights.”

Lucio added if anybody wants to help, they can make a donation at any Desert Financial Credit Union under the account named Cobra Fight Club Incorporated or call him at (520) 705-0689 to set up other arrangements. Cobra Fight Club is a 501(c)(3) nonprofit, and any donation can be written off for tax purposes.

In the meantime, Lucio is offering classes through Facebook Live on the gym’s Facebook page every Monday, Wednesday and Friday.

It’s the latest effort from Lucio, who has never turned anyone away from his gym, to do something for the community during challenging circumstances.

“I’ve been fortunate ... both of my family members and I [were] able to do sports like this, and a lot of kids around town don’t have that option. So we never turn anybody away,” he said. “I just want to be able to keep the gym and keep it for these people who need it.”