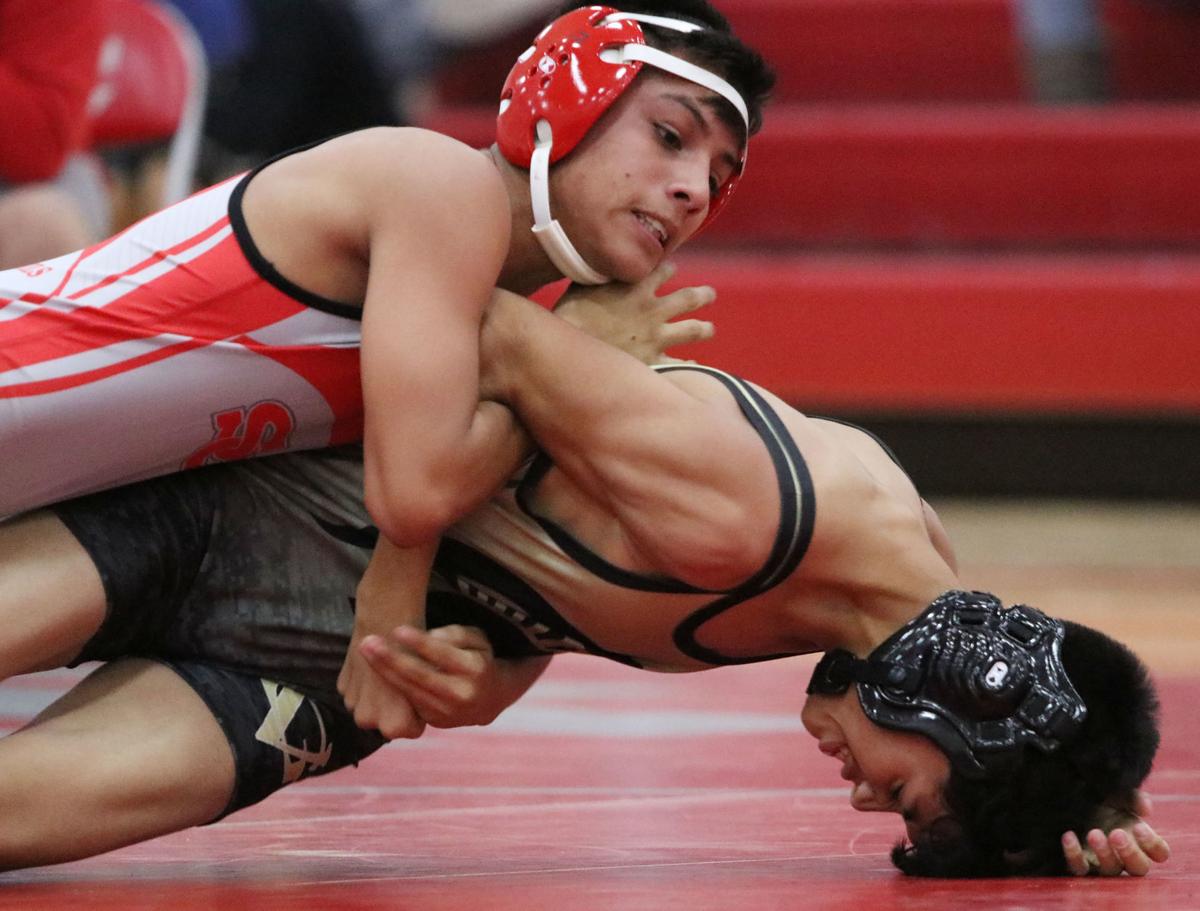 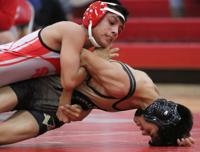 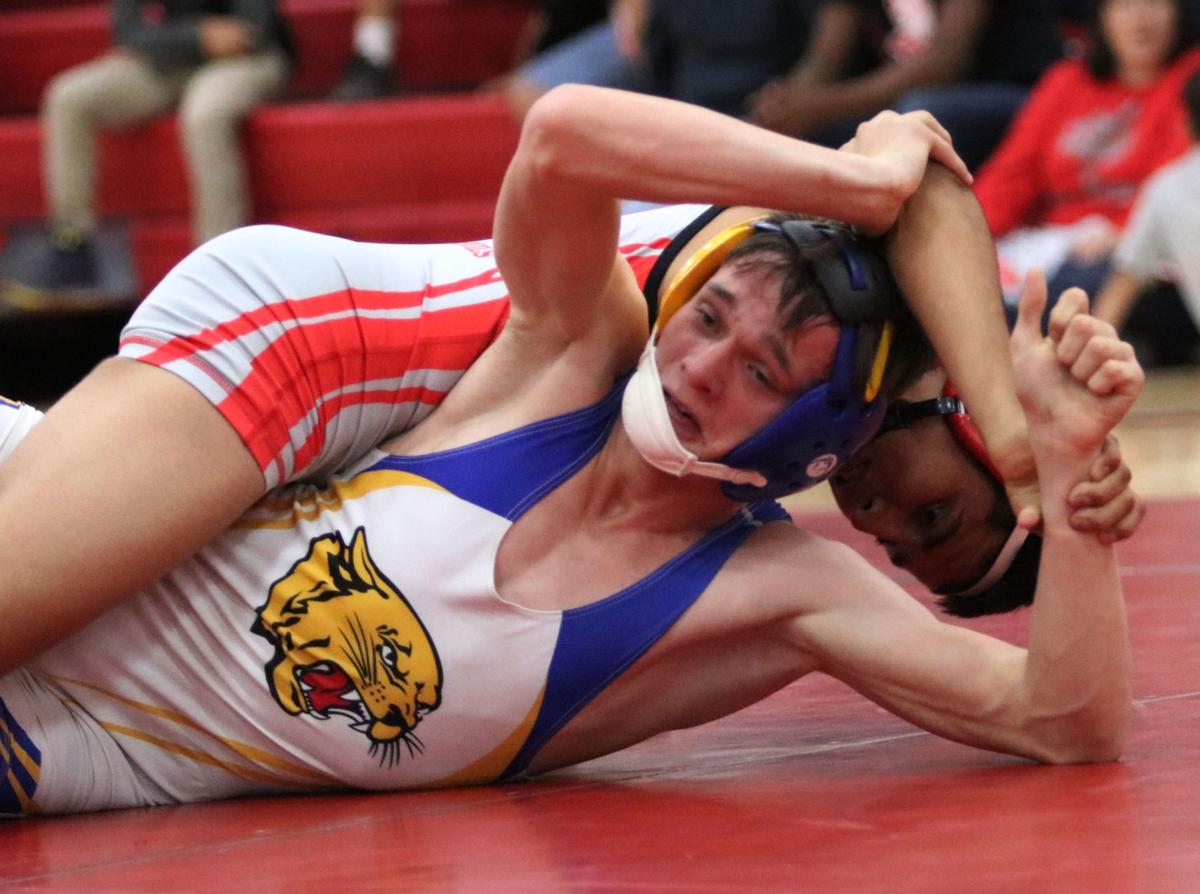 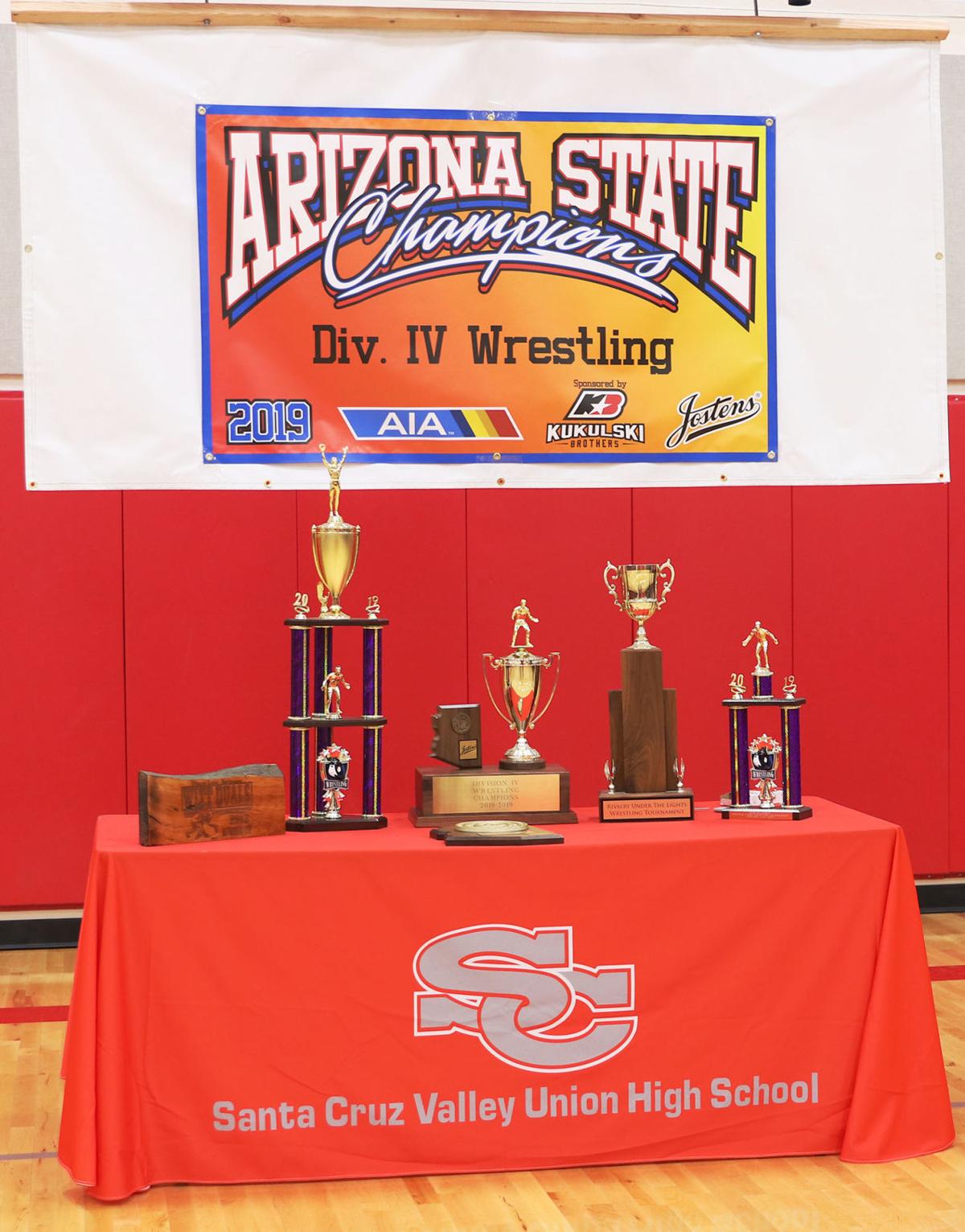 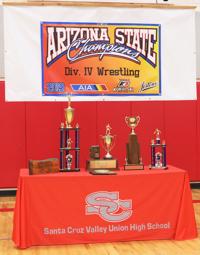 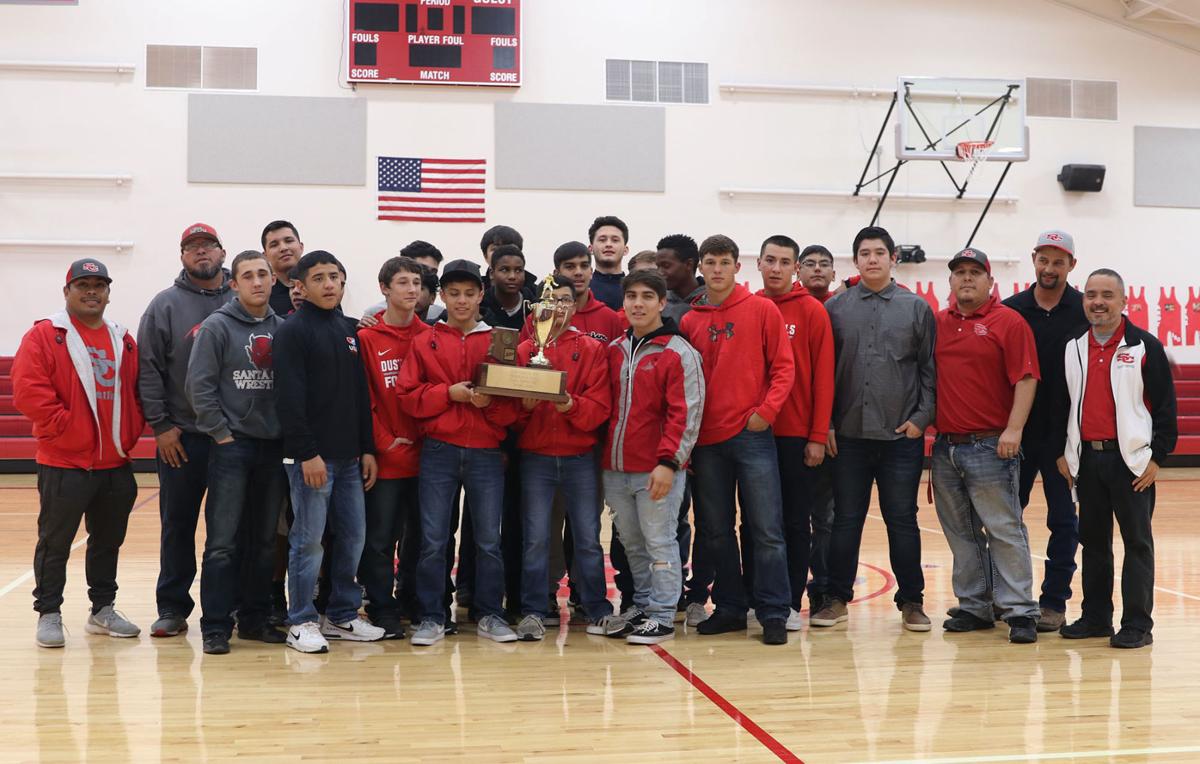 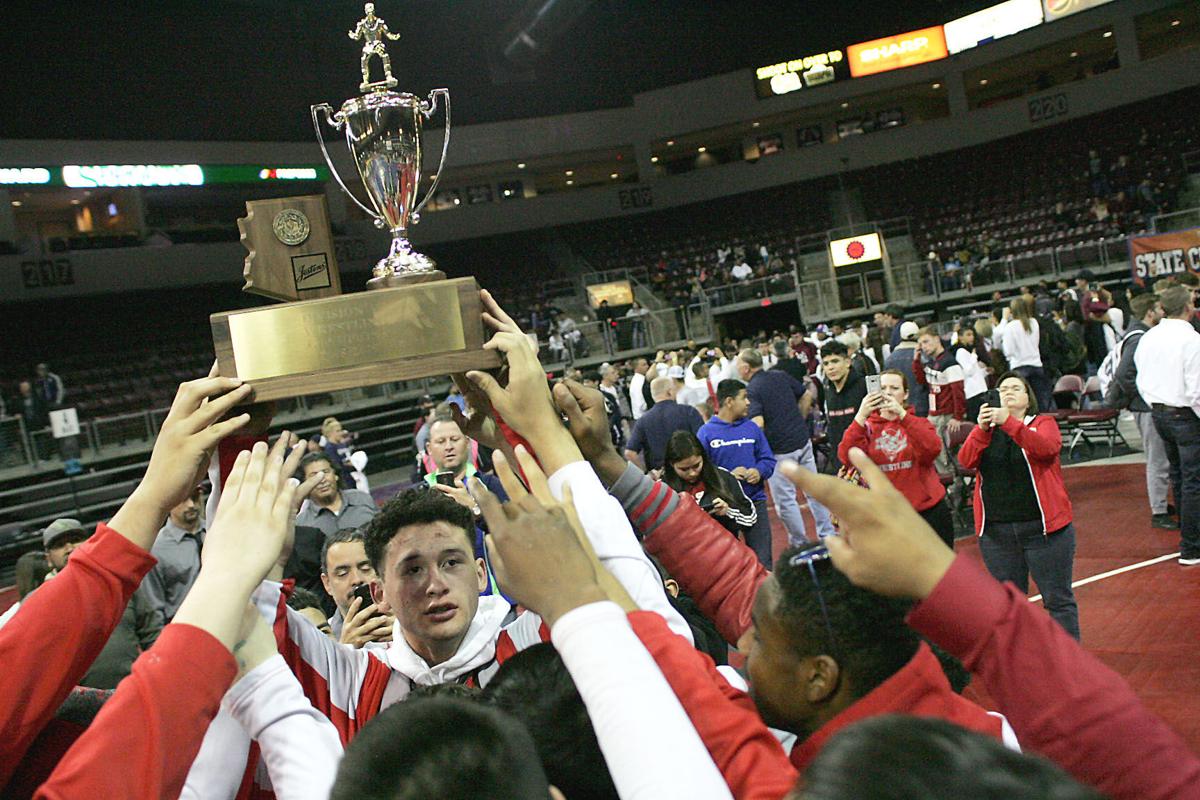 Members of the Santa Cruz Valley wrestling team hoist up the Division IV state championship trophy Friday night after winning the team title for the first time since 1995.

Members of the Santa Cruz Valley wrestling team hoist up the Division IV state championship trophy Friday night after winning the team title for the first time since 1995.

ELOY — When asked what the goals and expectations are for a team before the season starts, coaches typically give the same response of working hard to make the state tournament.

So what does the Santa Cruz Valley wrestling team strive for after coming off a title run? They want to defend the title and go back-to-back.

“If anybody comes into this room, it’s just a whole different atmosphere,” Santa Cruz coach Ray Belloc said. “When you’re part of something great and you feel that, they pick up on that and they just thrive with it, they run with it. As of right now, things are going great.”

The Dust Devils know that because they’re the defending champions, they have a target on their backs. Opponents are gunning for them.

“We have a target and they’re going to come after us with more, so we have to grind more,” said Davian Guanajuato, the 106-pound state champion last season.

After grabbing their sixth team state title last season, Santa Cruz Valley is looking to make it two in a row, a feat the Dust Devils haven’t accomplished since the late 1970s when they won three years in a row from 1977-79.

“We know what we’re supposed to do,” said Diego Chavez, the 160-pound state champ. “I feel like because we know how it feels to be really successful as an individual and as a team. So we can push our other teammates and maybe the ones that didn’t place how they wanted to place, we can continue to push them to reach their own personal goals. When we all do that as a team, that’s when the team title comes into play – when we all take care of our parts.”

The Dust Devils have a strong returning junior and sophomore class that includes three state champions and one third-place finisher in Hunter Ogle.

“We’re a young team still,” Belloc said. “It’s going to take a lot of hard workouts and dedication, blood, sweat and tears. These kids have been doing this for years, we don’t have many newcomers, but the ones that are in there, they’ve been on this type of level. We have a lot of kids who go to different states to go wrestle nationally, and they know what it is and they know to push each other to the limit.”

“They continue to wrestle during the whole summer,” Belloc said. “They put in a lot of work, whether it’s here or other places, they’ve just continued to wrestle in the offseason and work out.”

Guanajuato is a junior this year, while Ysaguirre and Chavez are sophomores, and Belloc said all three can finish their high school careers as state champions.

“A lot of us trust the work we put in, so when we go out there we don’t really get intimidated or really nervous too much or that someone can beat us because we trust in the work we put in,” said Ysaguirre, who won the 120-pound state title.

Being a state champion wrestler during all four years of high school has only been accomplished once at Santa Cruz – Willie Paul Maxwell did it from 1980-83.

“I’d like to say it’s not added pressure but when you strive to be the best and you want to be the best, there’s pressure on you,” Belloc said. “They know what’s at stake and the three of them are three of the hardest and toughest wrestlers in that room. They push on a daily basis, they give me 120% daily on everything that they do. There’s some added pressure, but they know what it takes to have to get there and continue.”

The Dust Devils will have a tougher road ahead of them this year after cruising though a lot of different wrestling meets and invitationals last year. This year Santa Cruz will participate in the Mile High Wrestling Challenge in Prescott.

It was an 11-year title drought for Santa Cruz, since the last team to win a title was the softball team in 2008.

“It’s a feeling that I can’t explain,” Belloc said. “This feeling as a team for the City of Eloy, for Santa Cruz, for the kids, that state title was everything. Honestly as a coach that was one of the things that makes me drive everyday as far as pushing these kids to get them there. To do it for Santa Cruz, I want to repeat, I want to win the next three or four year and I believe I have the team to do it.”