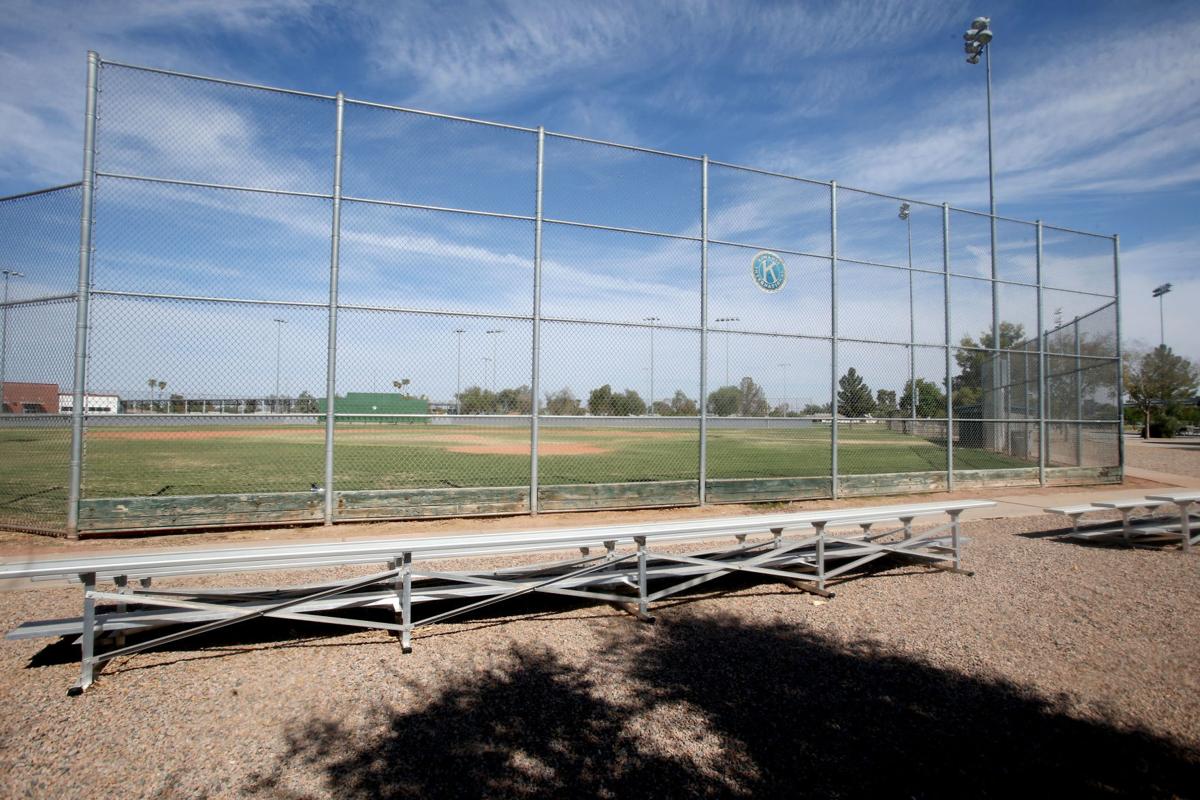 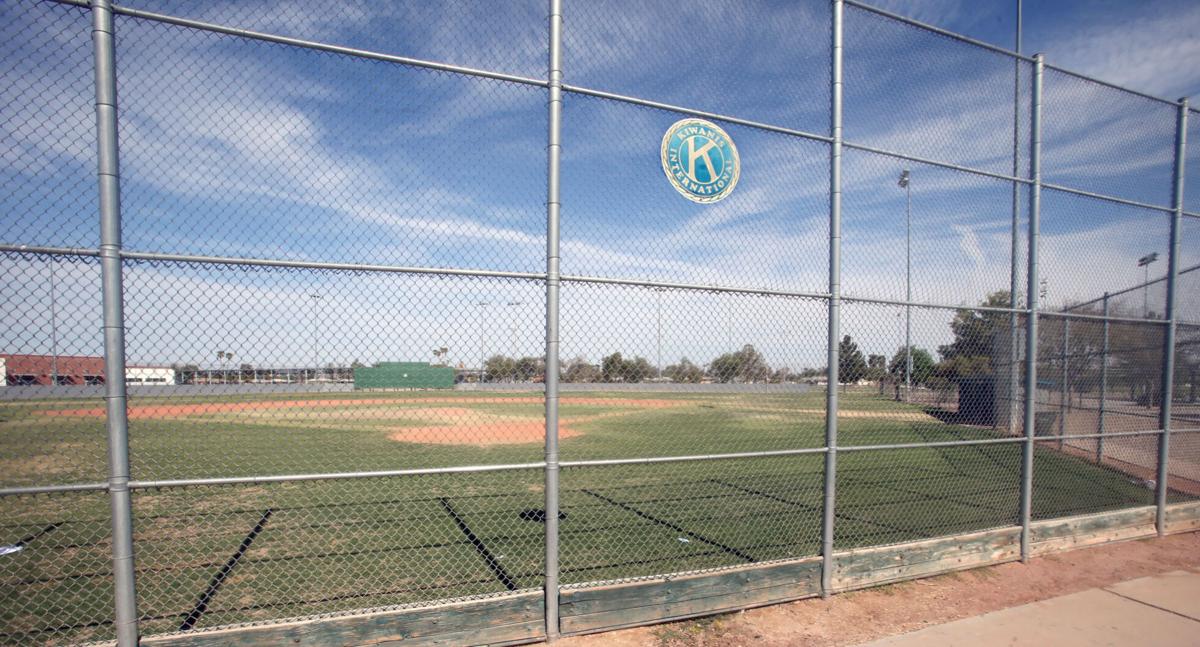 John Guy says he’s bringing professional baseball to Pinal County, and one of the venues where he expects games to be played is Kiwanis Field at Carr McNatt Park in Casa Grande, shown in this photo taken Monday.

John Guy says he’s bringing professional baseball to Pinal County, and one of the venues where he expects games to be played is Kiwanis Field at Carr McNatt Park in Casa Grande, shown in this photo taken Monday.

CASA GRANDE — For those who know the name Bill Veeck and what he meant to baseball, he is some sort of kindred spirit to John Guy.

Guy has worked as a promoter for minor league professional teams — mostly baseball — on and off since 1976. His latest brainchild involves bringing professional baseball to Pinal County. He plans to have games played in Casa Grande, Coolidge and Eloy.

It wouldn’t be the first time he’s done it in Arizona.

“I had 326 guys pay money to come to this (league),” he said in a phone interview. “I had two pitchers that threw 100 mph-plus. Eight players went direct to the (Triple-A) Mexican League ... No one can do that. I did.”

Armed with a dry sense of humor and the ability to boast like a carnival barker, Guy also takes what he calls his “hobby” of promoting minor league sports seriously.

How seriously? He called a PinalCentral reporter back from a hospital room at Banner Desert Medical Center in Mesa as machines beeped like a metronome in the background. Guy had taken a serious fall in Eloy earlier in the day and was transported to the Valley hospital.

He shares some common traits with Veeck (pronounced Veck), a famous baseball promoter and owner. The iconic ivy on the brick outfield walls of Wrigley Field was Veeck’s idea. He worked in minor league baseball and was also the owner of the Chicago White Sox, Cleveland Indians and St. Louis Browns.

Veeck was bold — in 1947 as the owner of the Cleveland Indians, he signed Larry Doby, who broke the color barrier in the American League just three months after Jackie Robinson became the first Black player in MLB history with the Brooklyn Dodgers.

But Veeck was also known for zany promotions and a wild sense of humor.

Guy has participated in some wild promotions of his own, including some that have stretched (or smashed) the boundaries of political correctness.

“My promotions can be pretty awful,” he says, deadpanning. “The fans don’t want to watch [minor league games]. Fans need a promotion that will get them there.”

The could mean a “Meet Jimmy Hoffa Night” at the ballpark, where fans get their photo taken with the notorious (and dead) former union leader and get an autograph.

Could there be an issue with verifying the identity of the ex-Teamsters kingpin?

“You don’t know what he looks like!” Guy exclaims.

Or there could be a “North Korea Night,” in which Guy says fans are given a single grain of rice.

“Just one, like they do in North Korea,” he says.

Guy once paid homage to baseball legend Ted Williams, whose severed head was cryogenically frozen and stored in Scottsdale after his death, by having a “Ted Williams Night” that featured free popsicles for the first 500 fans.

Guy plans to have the 2021 American Torque Winter League in Pinal County, which will begin Feb. 26 and run concurrently with MLB spring training, which ends in late March.

Venues are not locked in, but Guy wants to play at Kiwanis Park in Casa Grande, Shumway Park in Eloy and Kenilworth Sports Complex in Coolidge.

As for the elephant in the room — Guy acknowledges that all of this is contingent upon where Pinal County and the state of Arizona are in regard to the spread of COVID-19.

If things are significantly improved by February, it could go very smoothly. But that’s no certainty. It remains to be seen how the metrics will look in the state and in each individual county at that time.

If and when the league is played, there will be four teams. One will represent each of the aforementioned cities — Casa Grande, Coolidge and Eloy — and a fourth team will represent Sasco, a ghost town just west of Red Rock.

Each of the four teams will have a maximum roster size of 18. Guys said there will be tryouts for roster spots, with those tryouts possibly taking place in Maricopa.

Guy also acknowledged the lack of clubhouses at the fields where he wants to play, calling it his “biggest hurdle.” But that isn’t stopping him from moving forward.

Guy said he is talking with Steve Hardesty, director of community services for the City of Casa Grande, trying to convince him to let games be played at Kiwanis Park.

The goal for Guy is to be profitable. To do that, he hopes to get 200 fans to each game. He will charge $5 for adults and $3 for children. Each team will play 27 games.

Guy guarantees major league scouts will come to the games, with the action being just 35 to 45 minutes away from some of the MLB spring training sites. That will be an incentive to get players to join the league.

In a state of semi-retirement, Guy has enough fuel in the tank to make a good run at his latest venture.

“I just think, why not?” he said. “This will be my last hurrah. I will just retire and write books.”

He said tickets will probably go on sale Nov. 1, but those details are still being finalized. Yuma County was a more improbable place for him to have success with a baseball league, so Guy is plenty confident.