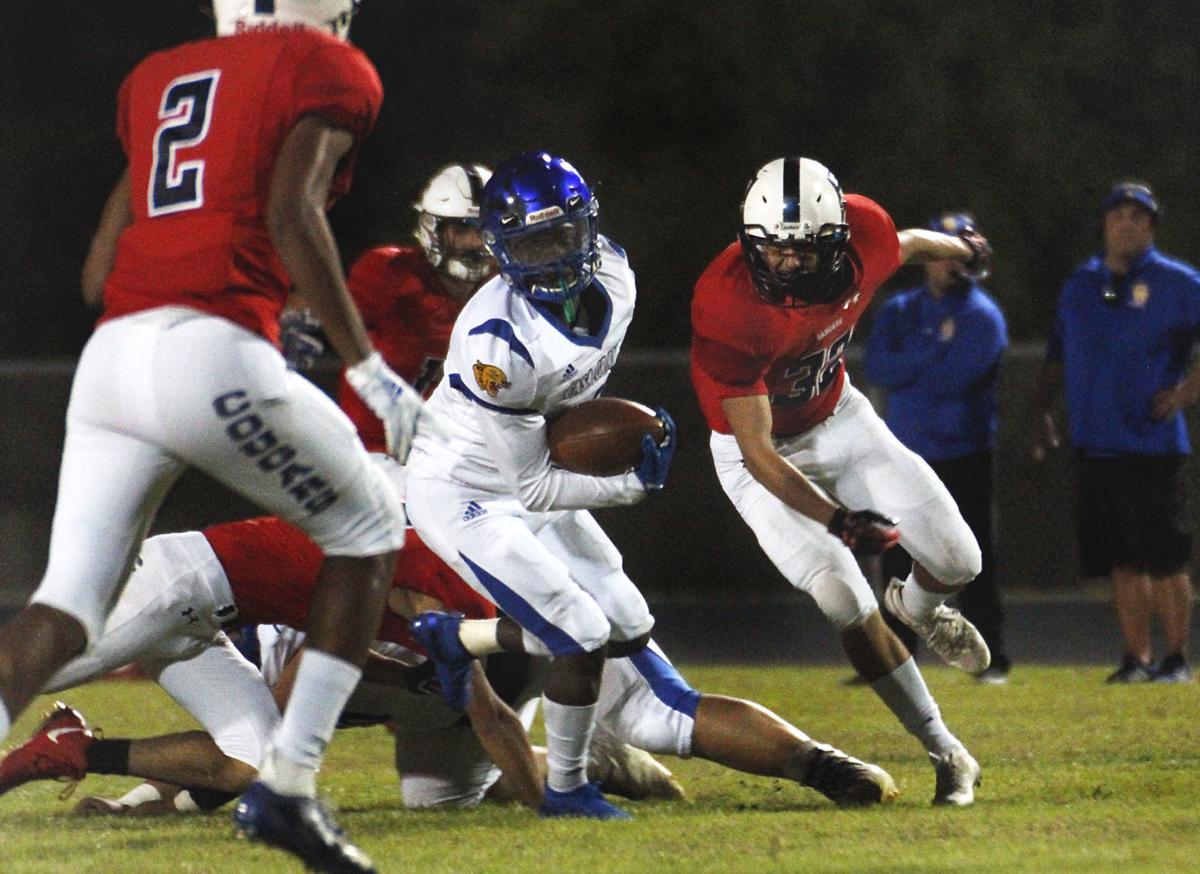 Casa Grande Union receiver Darrell Penn looks for an opening against the Tucson Sahuaro defense Oct. 25 in Tucson. Penn is hoping to parlay his success in summer 7-on-7 football into a walk-on offer at the University of Arizona. 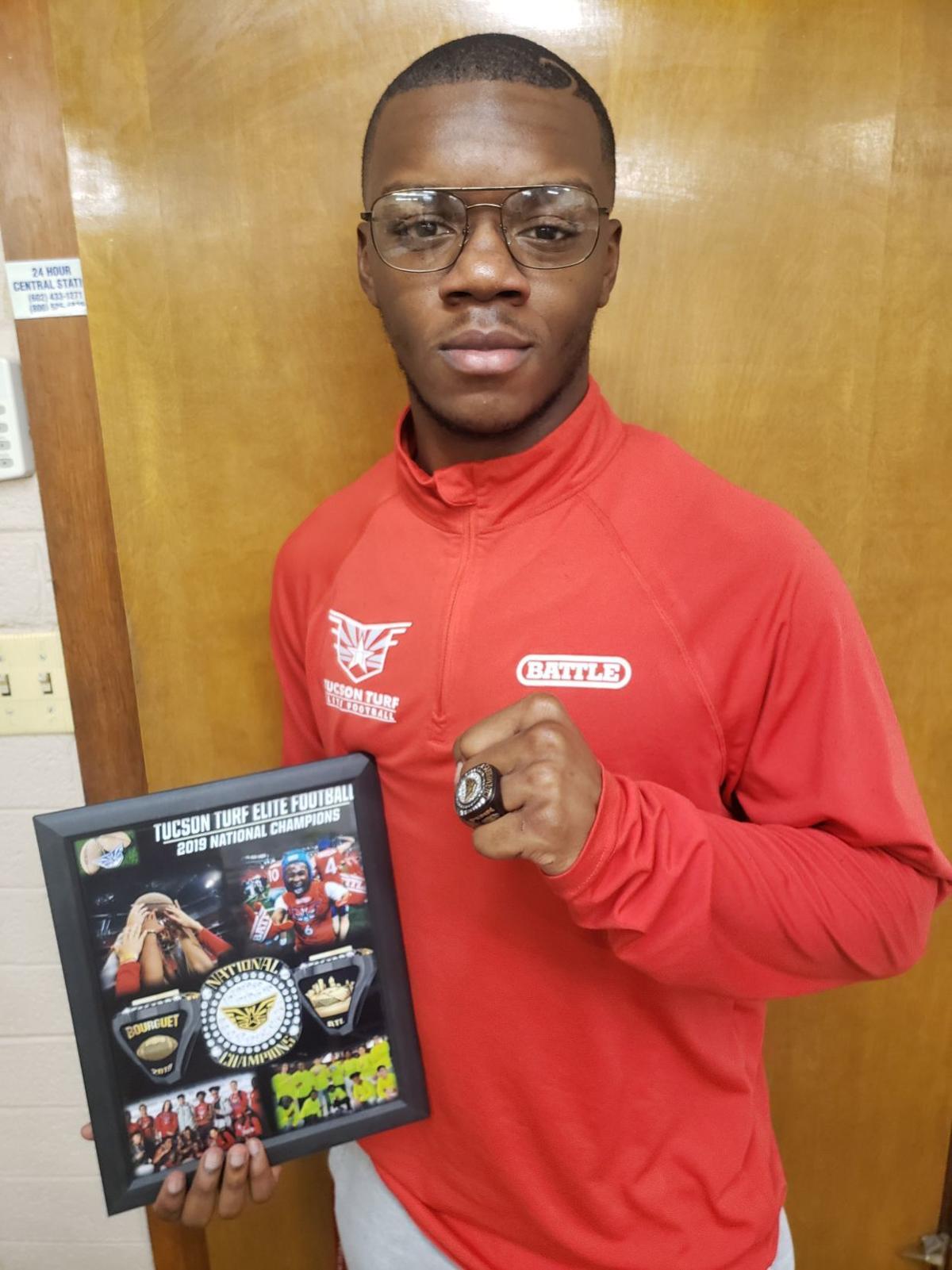 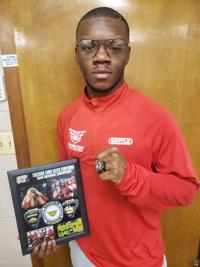 Darrell Penn shows off his ring and a championship plaque from the Tucson Turf’s 7-on-7 2019 national championship.

Casa Grande Union receiver Darrell Penn looks for an opening against the Tucson Sahuaro defense Oct. 25 in Tucson. Penn is hoping to parlay his success in summer 7-on-7 football into a walk-on offer at the University of Arizona.

Darrell Penn shows off his ring and a championship plaque from the Tucson Turf’s 7-on-7 2019 national championship.

CASA GRANDE — There is some football being played in Arizona, believe it or not.

There’s no tackling and no pads, but nonetheless the games are competitive and intense.

The most recent league-organized game involving a Casa Grande team came June 6 at a 7-on-7 tournament in Phoenix for high school teams preparing for the 2020 season.

Casa Grande’s AZ Krush lost a heartbreaker 28-22 to national power Tucson Turf on the last play of the championship game.

High school teams typically use the offensively-oriented 7-on-7 format in the spring and early summer as preseason workouts for skill-position players, but this year’s COVID-19 pandemic has thrown those tournaments, and flag football games for all age levels, into chaos. The June 6 tournament marked the first competitive activity for AZ Krush since March 7.

“It shut down our whole spring season,” said Luna, who’s also the freshmen football coach at Casa Grande Union. “It wasn’t just us. It was everybody. We were still working out, still throwing the ball around at the park for drills and just to keep the guys in football shape.”

A 7-on-7 squad can play up to eight individual games in one tournament and participate in six or seven tournaments a season for an offseason of nearly 50 non-contact football games.

The AZ Krush team is quarterbacked by Angel Flores, a junior heading into the 2020 season. He was the Cougars’ starting quarterback for the 2019 fall season, and is one of the top quarterback prospects in the state. The Krush comprises a roster of all-Pinal County players, Luna emphasized.

The Krush is ready to play in its next tournament Saturday. The organization also holds fundraisers each year, and has a car wash planned for August.

Also impacted by the pandemic this year was Tucson Turf, a program that has won 39 national championships between the two formats and has traveled to Florida and California to compete. Before June 6, its last event came in February.

“We only got to play in two national events. We had five slated,” said Toby Bourguet, director of operations for Marana-based Tucson Turf, a team he called the “Duke basketball” of 7-on-7 flag football teams.

In January, the team went to Miami and in February was in Las Vegas. Other tournaments in Dallas, Maryland and Los Angeles were canceled due to health precautions.

“We had plans to go to LA. We had rented out an 8,000-square-foot mansion. It was going to be quite an experience for the kids and everybody. It was really unfortunate when we had to cancel that, but it was a no-brainer. It intensified the (virus) risk, yes,” Bourguet said.

Penn hopes to parlay his tackle and flag football experience into a walk-on role this fall at the University of Arizona, and he and Bourguet are confident in his prospects of playing college football. The 5-foot-7, 150-pound fleet-footed pass catcher earned 2019 second team honors on the All-PinalCentral team. He caught 28 passes for 632 yards and five touchdowns.

“The coaches know who I am, so I’m going to go up there and walk on,” Penn said of joining the Wildcats.

Last summer, in the course of playing about 50 games of flag football with the Casa Grande team Keep Dreams Possible, Penn attended the Under the Radar football camp at Saguaro High School in Scottsdale and there drew the attention of Syndric Steptoe, a former NFL player now on the UA coaching staff. That connection landed him with Tucson Turf for the remainder of the 2019 7-on-7 season and the national tournament in Atlanta, which was held at the Falcons’ Mercedes-Benz Stadium.

“It was a pretty good experience,” Penn said of being on an NFL field, although with far fewer people in the stands. “It kind of felt small being on the field, but I guess when you’re in the bleachers from the camera angle it looks big. It felt like a regular field just with really good turf. It felt like a normal-size field.”

During the pandemic, Penn has been working out in Mesa with trainer Siaha Burley, a former pro football player and coach in the Arena League. His slender physique might need some training, but his confidence is not lacking a bit as he aims to gain a role with UA this fall. He’s counting on his performance in Atlanta as a stepping-stone into the NCAA.

“It boosts your confidence when you play against a high level. When you come back and play against normal competition, you feel like you’re above them. It’s not like it’s a bragging thing. It’s a confidence thing. You gain confidence from that three- or four-day experience, especially when you win. It sticks to you,” Penn said.

Penn has the talent and correct attitude to make it in college, said Bourguet, who currently has 22 college players with Tucson Turf. The opportunity to showcase himself is what Penn needs now, the coach added.

“He’s a very skilled athlete, but he’s a humble kid. I liked the way he carried himself,” Bourguet said. “We’re trying everything we can to get Darrell an opportunity. Someone will give it to him whether it’s the UA or somebody. Just like my son (Trenton). My son’s an undersized quarterback, but God’s given him gifts, and if somebody gives (Penn) an opportunity they’ll see he can offer somebody something. Skill set is there.”

Bourguet should know when a player from his program earns an NCAA opportunity, since Trenton is entering his second season as a quarterback at Arizona State. As the quarterback at Marana, he threw for a career state-record 89 touchdowns and 7,612 yards. In his senior season alone, Trenton had 22 TD passes and 2,460 yards.

Although Bourguet has yet to appear in a game for the Sun Devils, his coach-father believes his time will come.