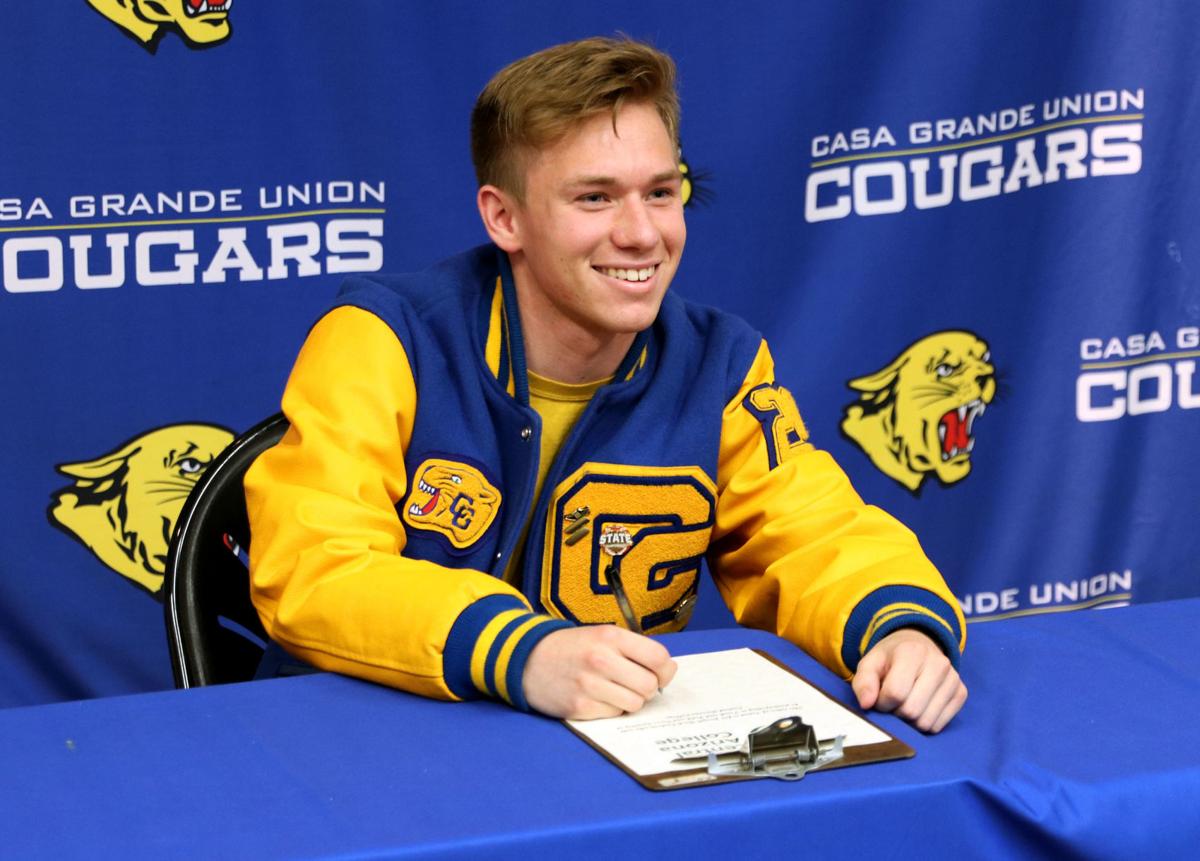 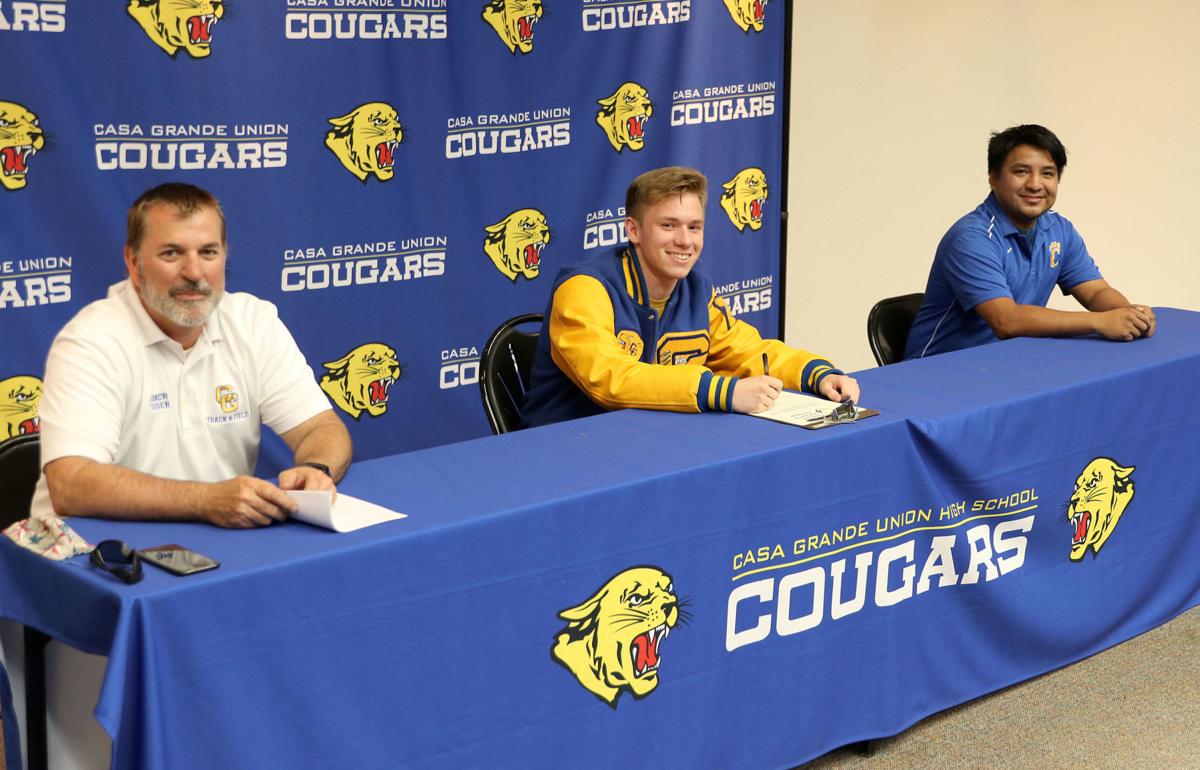 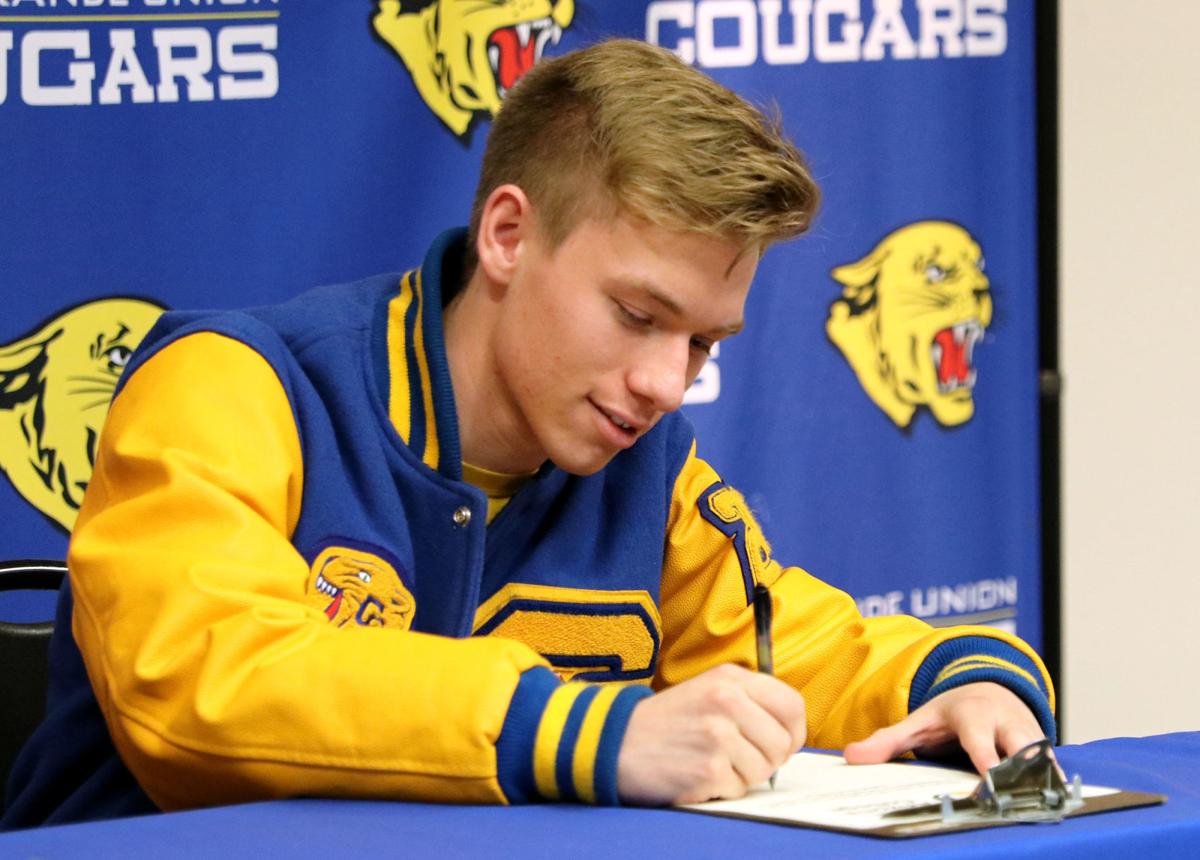 CASA GRANDE — Joseph Carlson was in middle school when his mom told him stories about her time running cross county and track in high school.

“I’ve kind of always been the faster kid in middle school, so I kind of thought about it,” Carlson said. “Like that’d be really cool if I could get to the point where I could run competitively, and I started thinking about maybe joining in high school.”

But that’s all it was at that point for Carlson, just a thought. Halfway though his freshman year, a friend in his physical education class approached him about joining the cross country team.

“He was already in cross country and said ‘Hey, I think you’d be really good. I think you should sign up for cross county,” Carlson said. “He was the one person who actually kind of pushed me to join, and ever since I joined, I stuck with it and it really changed my life.”

Once the season was over, he signed up for track and field in the spring and hasn’t looked back since. On Monday morning, Carlson signed to continue running both sports for Central Arizona College.

Both of his coaches, Kurt Kieser and Mark Saraficio, were on hand for his signing and noted that Carlson made big strides thoughout his high school career.

“He kind of does whatever we want him to do in track, and those are the kind of guys that we like,” Kieser said. “Those are the ones that usually go on for college scholarships, the very versatile ones, and Joseph was very versatile in his running. He even ran a 200 (meters) one time in a dual meet to see how fast he was. It was really going to be a breakout year for Joseph, and we’re sad that [the season canceled due to COVID-19] had to happen, but we’re glad that he gets to continue his running.”

Carlson admitted when he first started running cross country, it was really difficult, but the family atmosphere created by his team is what made him want to continue to keep running into the track season.

“I wouldn’t have made the friends I made,” he said. “I wouldn’t be who I am, I wouldn’t think the way I do now, if I didn’t have cross country or track and field in my life.”

Carlson enjoys the competitiveness of track and field and how the athletes have more time in the spotlight than they do in cross country.

“You get noticed easier and people see how fast you are,” he said. “I love getting the recognition, and I just fell in love with it my freshman year. I’m really sad I couldn’t finish out my senior year. (College) it’s a next step in my life, it’s definitely going to be more competitive, and I’m excited for that. I want to keep getting better especially since I missed this season, it’s going to make me want to run harder and be more competitive.”

He said CAC will be a good fit for him because it offers what he’s looking for without having to be far from home and he already has a friend on the team who can show him the ropes.

As for his education, Carlson is interested in science but isn’t sure what discipline he wants to pursue.

“My coach Mark (Saraficio), he’s been a big inspiration to me and his vast amount of knowledge that he has about our bodies, and the way he trains us, it makes me want to be like my coach,” he said. “I think that maybe in the future I can become a coach and help others get just as good as me.”

Running may have always been in Carlson’s blood given that his mom and her siblings all ran and were good athletes, but despite the family pedigree, Carlson said he never felt any pressure.

“There’s something my coach said,” he recalled. “’I’ve never seen such talent in one specific runner.’ He said that at one of our banquets, and my mom thought that was really interesting because she heard those exact words from her coach about her when she was in high school.”