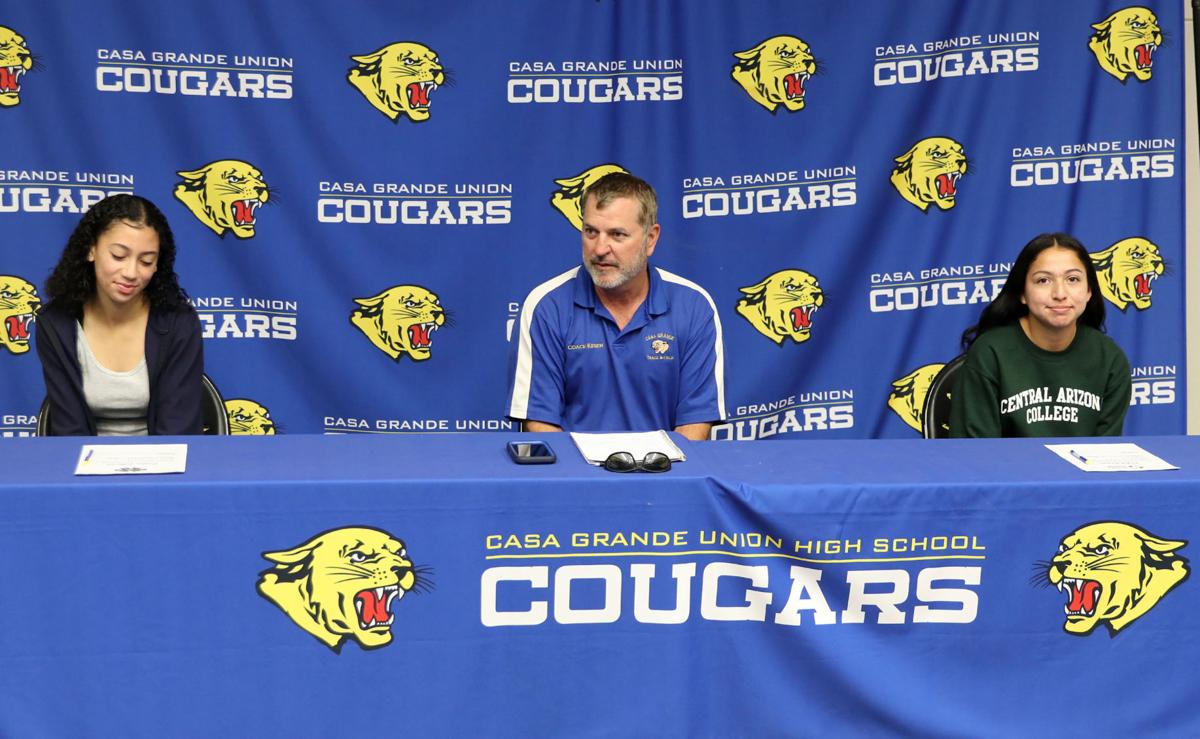 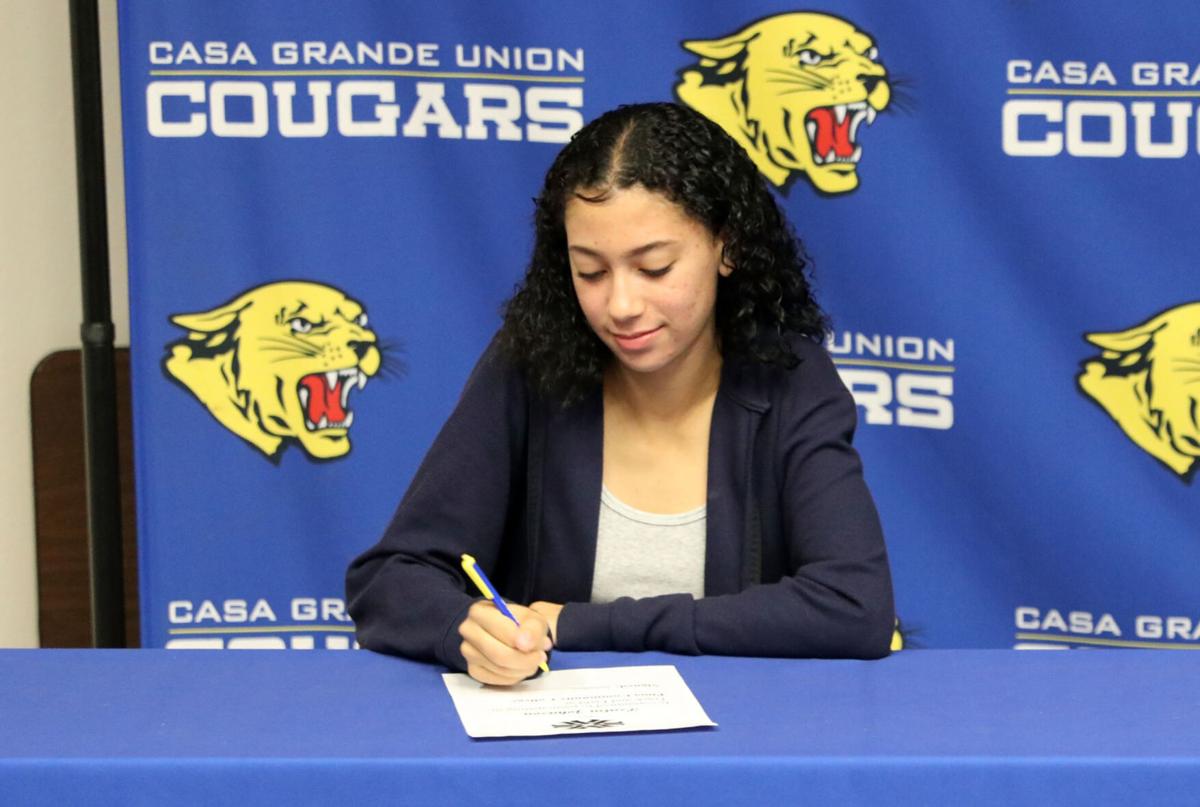 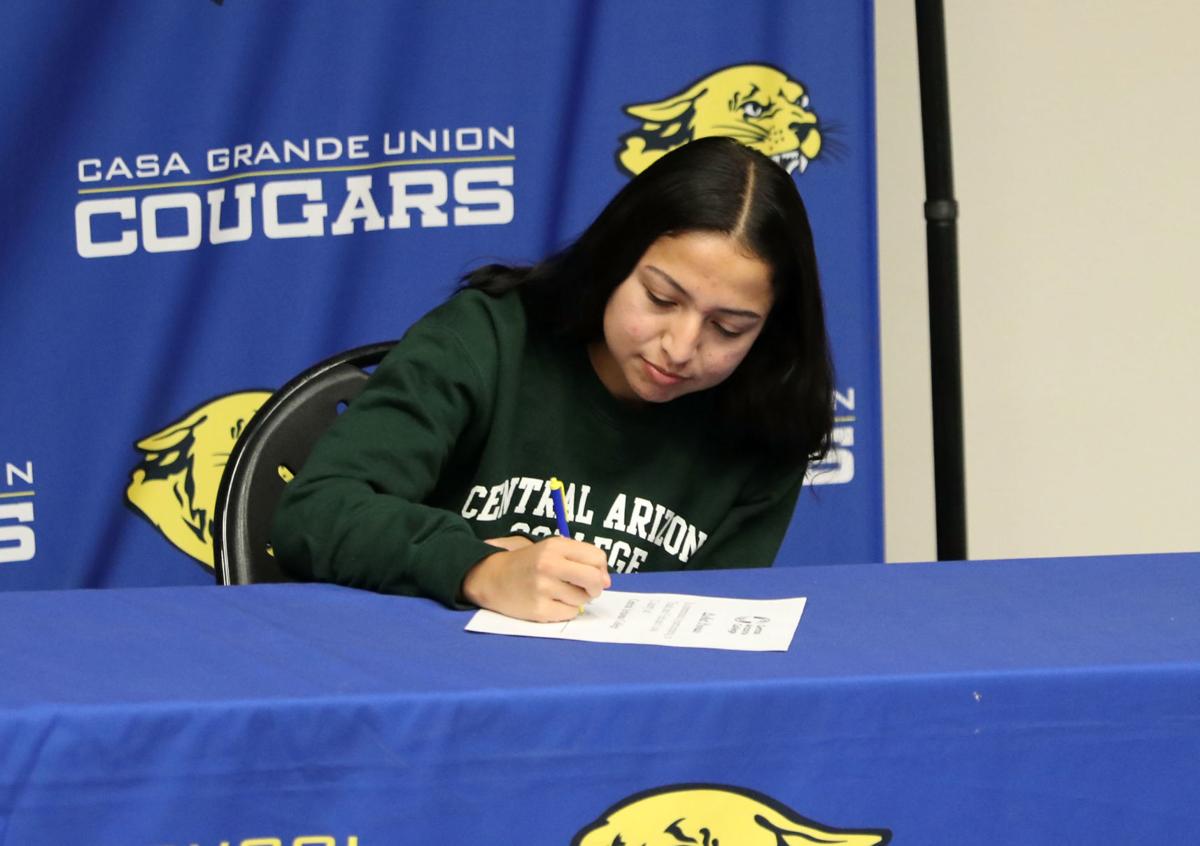 CASA GRANDE — When Lisbet Porras and Psalm Johnson arrived at Casa Grande Union, they would look up at all the photos and the records hanging on the walls as they walked to the girls locker room.

They dreamed of having their name alongside the many former athletes in the CG Union record books.

Johnson and Porras competed in track and field during all four years of high school, and on Friday, signed to continue their athletic careers at Pima Community College and Central Arizona College, respectively.

“Ever since I saw the people on the walls, I was like, that’s going to be me one day,” Johnson said. “It feels great, I feel like I really accomplished something.”

Both Porras and Johnson competed in other sports, Porras played soccer, and Johnson played volleyball and basketball.

Johnson’s road to Pima was like something out a of movie. She was running a meet one day when the assistant coach ran up to her and aggressively attempted to recruit her.

Johnson said she gave the coach her contact information but afterwards a few weeks passed, and she did not hear from the coach. At that point, Johnson thought the coach had changed her mind.

Luck would have it that the two would run into each other again, and the Pima coach told Johnson that she had been texting her but had not received any response. It turns out that the phone number in the coach’s phone was off by one number.

After meeting with the head coach, Johnson eventually drove out to see the campus and instantly knew she would sign with Pima.

Johnson is unsure of what she wants to study but is excited about whatever her future holds.

“I’m just kind of taking things day by day and hoping for the best,” she said. “I’m just really excited to see what happens next. I don’t really have goal at the moment other than going to the Olympics. I really want to go to the Olympics, and I will try as hard as I can to get there.”

Johnson’s goal of competing in the Olympics began her sophomore year when she noticed how she continued to improve. After watching the games on television, she told herself that was something she wanted to do.

Porras began running when she was in middle school, but it seemed like that dream was over before it started.

“I mean nobody likes running,” she said. “Obviously, I hated it and I quit. My coach told me I had potential and having someone believe in you, it makes you want to continue.”

Porras will also participate in cross country for CAC and is excited to join some of her former high school teammates.

Porras added she’s looking forward to competing at a higher level and seeing what other record she can break in college.

She plans to go into the healthcare field either through massage therapy or any other way where she can help people. Being an athlete, she’s also intrigued in figuring out things that are going on with her body and how she can understand her own injuries better.