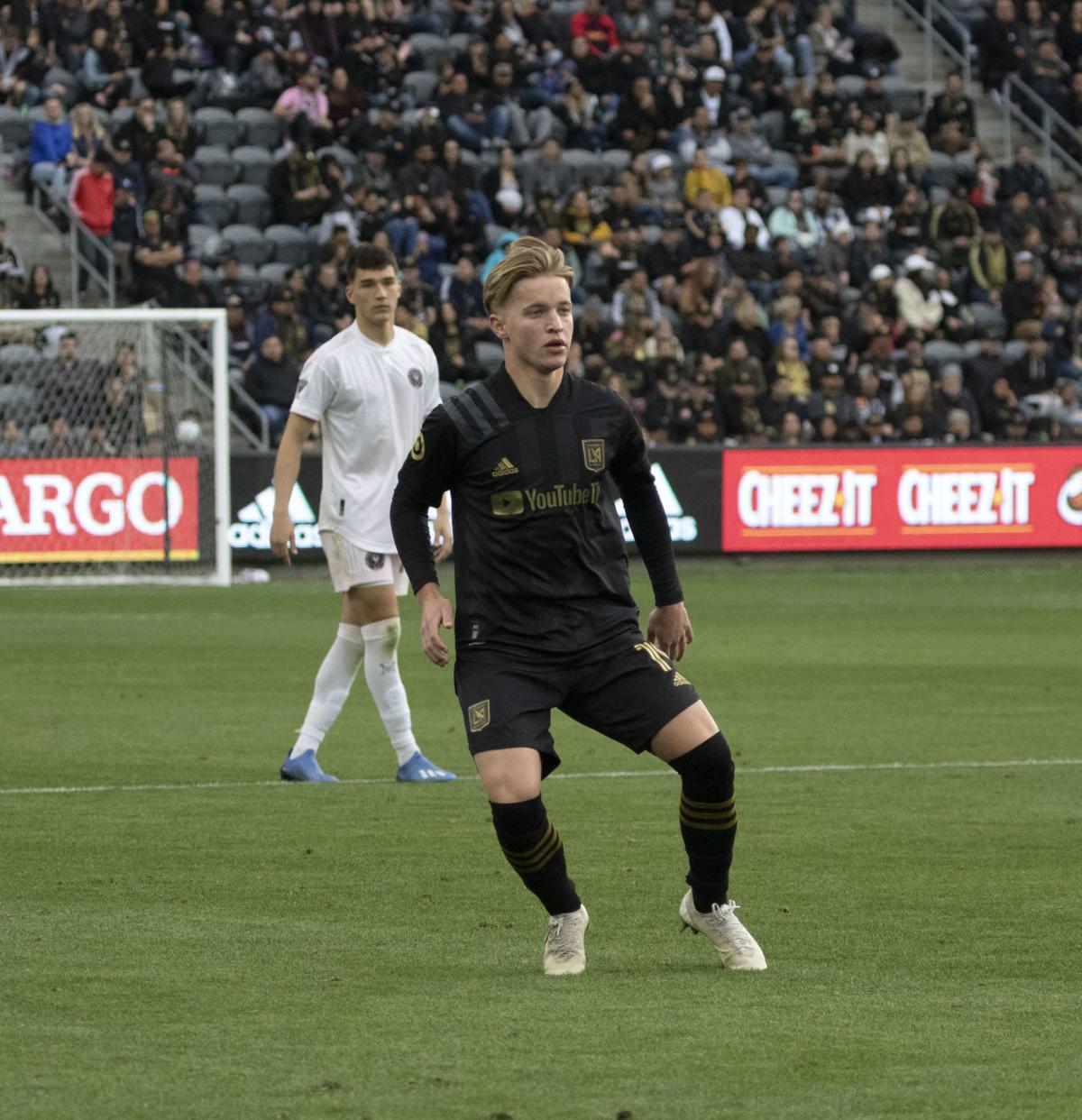 LAFC’s Bryce Duke awaiting the ball in a game against Inter Miami on March 1 in Los Angeles. (Photo by Nick Tirella/Cronkite News) 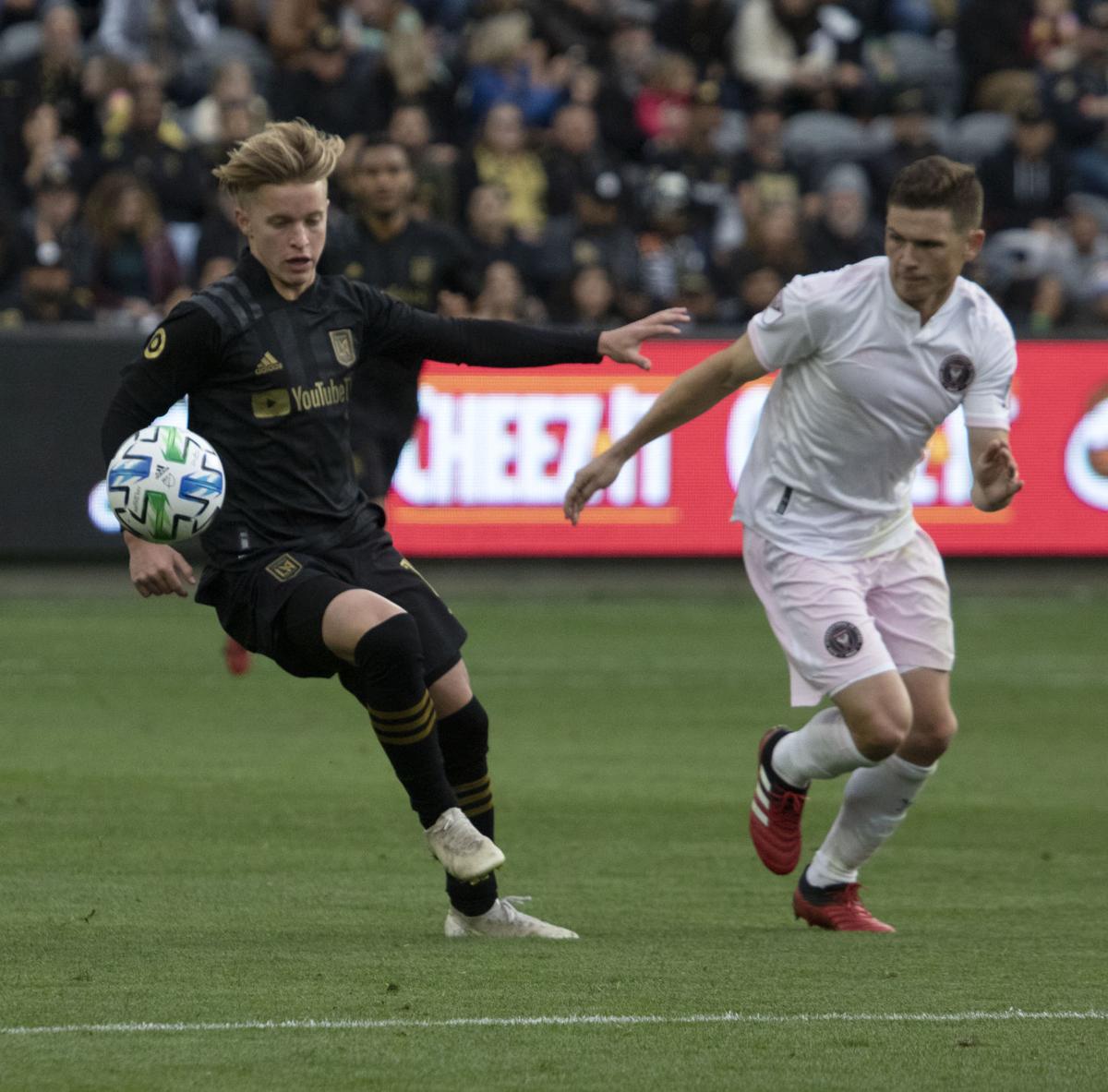 LAFC midfielder Bryce Duke handling the ball during a game against Inter Miami on March 1.

LAFC’s Bryce Duke awaiting the ball in a game against Inter Miami on March 1 in Los Angeles. (Photo by Nick Tirella/Cronkite News)

LAFC midfielder Bryce Duke handling the ball during a game against Inter Miami on March 1.

LOS ANGELES – The Los Angeles Football Club has been known to pick up young players who go on to succeed in their soccer careers, and in January, they signed Bryce Duke of Casa Grande, who was 18.

At Barca Academy, Duke had five goals in 13 games with 12 starts. In three years with Real Salt Lake, he scored 16 goals in 59 matches.

“The playing style is super similar,” Duke, who’s now 19, told Cronkite News, comparing Barca Academy to LAFC. “I kind of got a little information at Barca and brought it here.”

In addition to his skills, Duke said he’s bringing Arizona culture and his personality to LA.

Duke, who’s originally from Peoria, Arizona, is one of 46 players to go straight from the academy to the pros since Barca opened in 2010, and he was called up on the U.S. U-18 Men’s National Team last year.

Duke’s unique ability isn’t just on the field though.

“Not only is he a talented player, but he is an amazing young man,” Kline said. “He brought a lot of positive energy, smiles all of the time and was embraced quickly by everyone here.”

One player Duke idolized was Andrés Iniesta, who played many years for FC Barcelona. Iniesta was half of the reason he got into soccer, Duke said.

“Me and my dad loved watching him and would always watch the Barcelona games when I was younger,” he said. “I started playing soccer at age 3 because my dad got me into it.”

The LAFC signed Duke at 18 with a “homegrown player” contract because the club acquired his rights from Real Salt Lake. LAFC will send Real Salt Lake $50,000 in 2021.

The homegrown player rule is a program that allows MLS teams to sign players if they come from the team’s own development academy and allows them to be on the MLS first team roster.

LAFC coach Bob Bradley tends to pick younger players so he can develop them over the years. Eleven out of 24 players on the team are 23 or younger.

“You can tell that he likes young guys, to develop and become successful,” Duke said of his coach. “And that’s a big reason why I came here, LAFC seemed like a club I could succeed and become the player I’ve wanted to be.”

During an interview after LAFC’s home opener against Inter Miami on March 1, left back Jordan Harvey mentioned how Duke and other younger players are contributing and working hard to prove themselves.

“Bryce came in right away, and it was the first day, maybe his reactions weren’t that great, and from the first preseason game when he was with us for a day to the second, you saw great progress,” Harvey said.

Duke’s first appearance with LAFC had come in a preseason game against Leon.

The other 13 are considered to be veterans and always eager to make the young players feel at home.

Bradley talked about the veteran players in a postgame interview.

“All those guys have given a lot to what has gone everyday and are great examples to the young players,” he said.

“LAFC is super family oriented, it didn’t take long to feel welcomed, everyone knows everyone,” he said.

Duke’s ultimate life goal is to become a soccer player in the European leagues, and he hopes that LAFC can get him there.