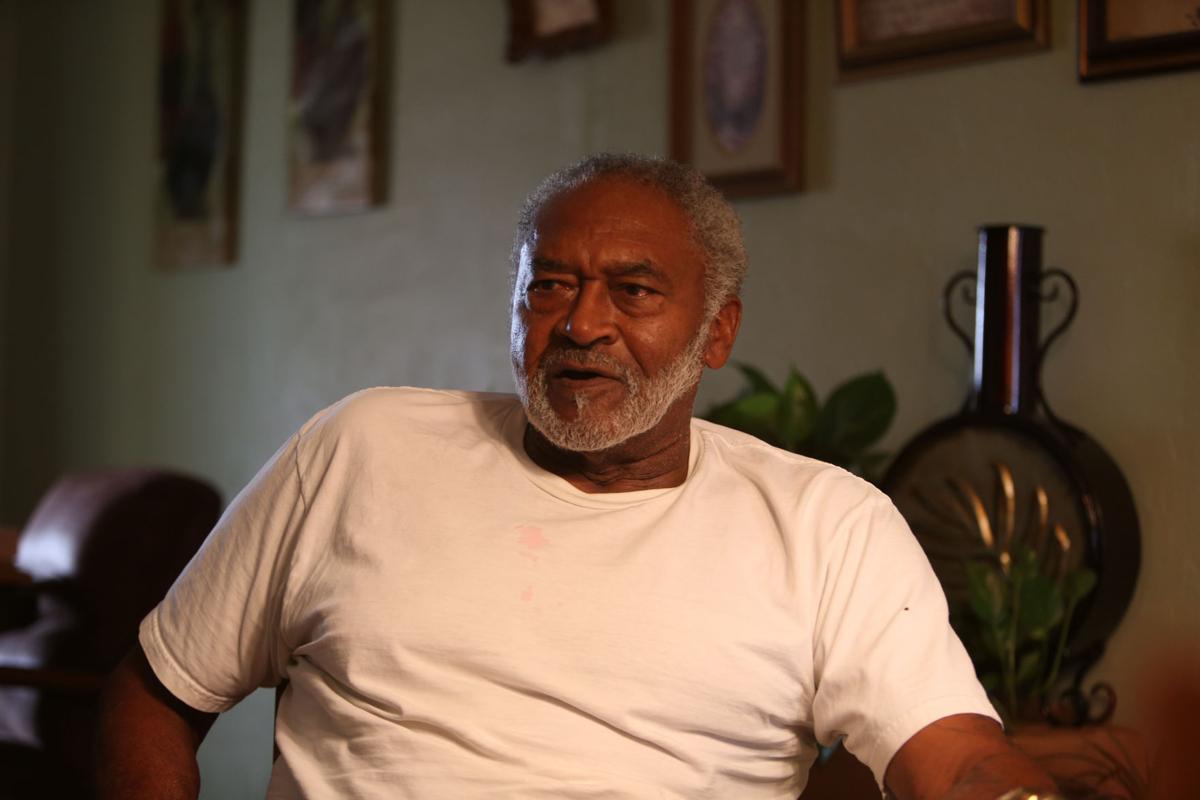 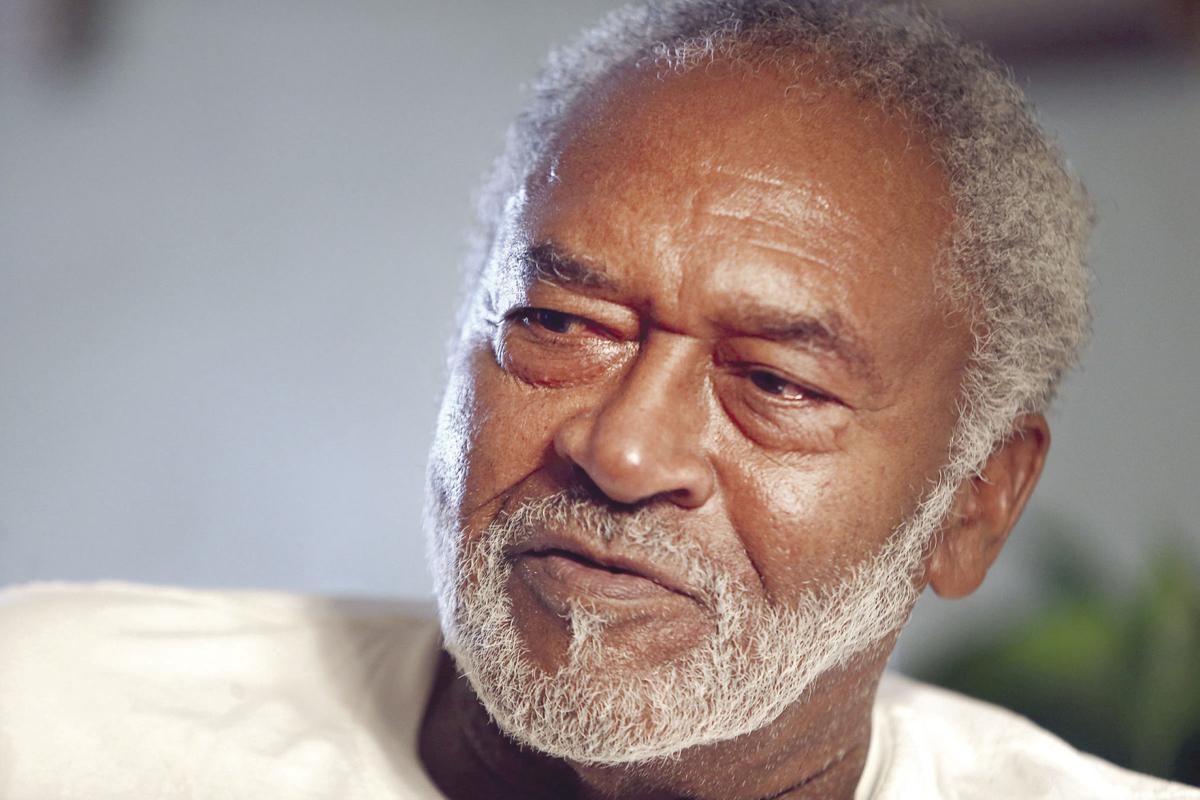 CASA GRANDE -- Ulysses Sharp once took the field against the legendary Kansas City Monarchs of the Negro Leagues. He didn’t blink.

Sharp, who lives on a small street called Jahns Place two miles north of downtown, looks like a former athlete. Even at 82 years old, and not in great physical health, the height, broad shoulders and athletic frame are still visible through the ravages of age.

In his prime, he was 6-foot-4 and 180 pounds. His tall, lean build earned him the nickname “Slim.” He primarily played first base but also stepped in wherever he was needed on the diamond.

For someone who had a promising potential baseball career that was never fulfilled, at least partly due to things out of his control, Sharp is not bitter. He could also harbor resentment due to battling cancer at various stages of his life. As a black man, he grew up at a time when black people were treated as second-class citizens.

But sitting down at his kitchen table with him, there are no signs of those trials and tribulations having a negative effect on his life.

On the contrary, he is genial and kind with a warm personality and sunny disposition.

About the age of 15, Sharp, who lived in Stanfield, began playing with a local baseball team called the Stanfield Blues. This was approximately 1950, and the Blues played teams from Eloy, Coolidge, Mesa and Phoenix.

“There was no league; it was just weekend entertainment,” Sharp told PinalCentral.

The Blues were comprised of black and Hispanic players. There were no white players on the team. It was a time of intense segregation.

Because there were no high schools for blacks in his area, Sharp left school at age 16 after finishing eighth grade.

Sharp said in 1950 or 1951, a popular all-white traveling team called the House of David played the Kansas City Monarchs in Casa Grande. The teams frequently traveled together. The House of David was a religious team, and most of its members had long hair and beards because their faith prevented them from shaving or cutting their hair.

The Stanfield Blues got to play the winner of that game, which turned out to be the Monarchs. The game took place at Kiwanis Field at Casa Grande Union High School.

Sharp doesn’t remember much about the game itself or who played for the Monarchs that day. Based on the time period, it’s possible that Hall of Fame shortstop Ernie Banks played in the game.

Over the years, the Monarchs produced some of the greatest players of all-time, including Banks, Jackie Robinson and Satchel Paige.

However, Sharp and the Blues weren’t intimidated by the Monarchs. They played against good competition regularly, including against a local powerhouse team called the Cotton Kings.

“It didn’t bother us to play anybody,” he said. “We were pretty good. And if the time had been right, I know that some of the guys on that team in Stanfield would have at least got to semi-pro ball.”

In fact, Sharp and one of his teammates were approached by the Monarchs manager, who wanted one of them to join the team. Sharp was just 16, and both were under the age of 18.

“We weren’t old enough to make our own decision, and our parents wouldn’t sign for us,” Sharp said.

It wasn’t the only opportunity he had to play professionally. The next time, it wasn’t his age that held him back; it was something far more serious.

Sharp was diagnosed with breast cancer at 19 and had his left breast removed.

“They had a black guy managing, and I talked with him, and he was interested because he had seen me play,” he said. “I had to have a sponsor, and I had just gotten married and had the operation, and that killed all that.”

Sharp’s doctor thought he would be fine after the surgery — although cancer would recur later in life — and Sharp said the operation didn’t affect his athletic prowess. But he gave up on pursuing a professional baseball career after the Decatur team passed on him.

He was already working for a custom harvester in Mesa, a job that included cutting grain and driving a cotton picker, so he just kept his job and continued playing baseball in Mesa, Phoenix and other areas of the Valley on the weekends.

Sharp played on local baseball teams for several more years. One of his teammates in Mesa was pitcher Phil Ortega, who went on to play 10 years in the majors, mostly with the Los Angeles Dodgers and Washington Senators.

In 1964, Sharp and his wife Versie moved to Los Angeles, where he worked as a bricklayer. He went to Dodger Stadium every chance he got. A friend of his named Claude Gipson was starting his own company in Casa Grande called CG Commodities.

“He kept bugging me to come and go to work (for him), and my wife didn’t like L.A. anyway,” Sharp said.

Sharp accepted Gipson’s offer, and he and his wife moved to Casa Grande in 1968, where they have lived ever since. The couple raised eight children, and most of them still live in Casa Grande. Sharp even works for the same company to this day — 49 years later — and he’ll celebrate a 64th wedding anniversary with Versie on Sept. 8.

Certain ugly realities still existed in Casa Grande in 1968. There was a literal line of segregation in the city.

“There were no blacks living on the north side of Florence Boulevard,” he said.

And that wasn’t all. Sharp said blacks were not allowed at restaurants, bars and other public places, and he personally faced housing discrimination. Living in Arizona for many years, he wasn’t unaccustomed to it, but it was a little worse than he expected after returning from Los Angeles, where he had more freedom.

He never let it get to him, even though he didn’t like it.

“It never bothered me,” he said. “My dad always talked to us about things like that … I knew that’s the way it was.”

His children never had to experience that environment, and they express shock and bewilderment when they hear Dad’s stories. Sharp said things began to change in the city as the 60s came to an end.

Casa Grande is much bigger now — it had a population of 10,000 in 1970 — and much has changed. While many people still consider it a small town, Sharp said it used to be a place where everybody literally knew everybody. But he still has a soft spot for the place he’s called home for nearly a half-century.

The passion for baseball never left Sharp, and he always loved being around the game and the players. He fondly remembers not just watching, but meeting San Francisco Giants players when they held spring training at Francisco Grande — where the Giants played from 1961-81.

Willie McCovey, Bobby Bonds and Jim Ray Hart were some of the guys Sharp really liked. He even struck up a good friendship with Hart, who primarily played third base for San Francisco from 1963-73.

Giants superstar Willie Mays was a different story. Sharp recalls him as aloof, a prima donna.

But the game itself — that’s something that still puts a sparkle in Sharp’s eye.

Watching baseball is great, but playing it was the best.

“I just loved the competition,” he said. “Ever since I was big enough to put on a baseball glove, I just loved playing the game.”