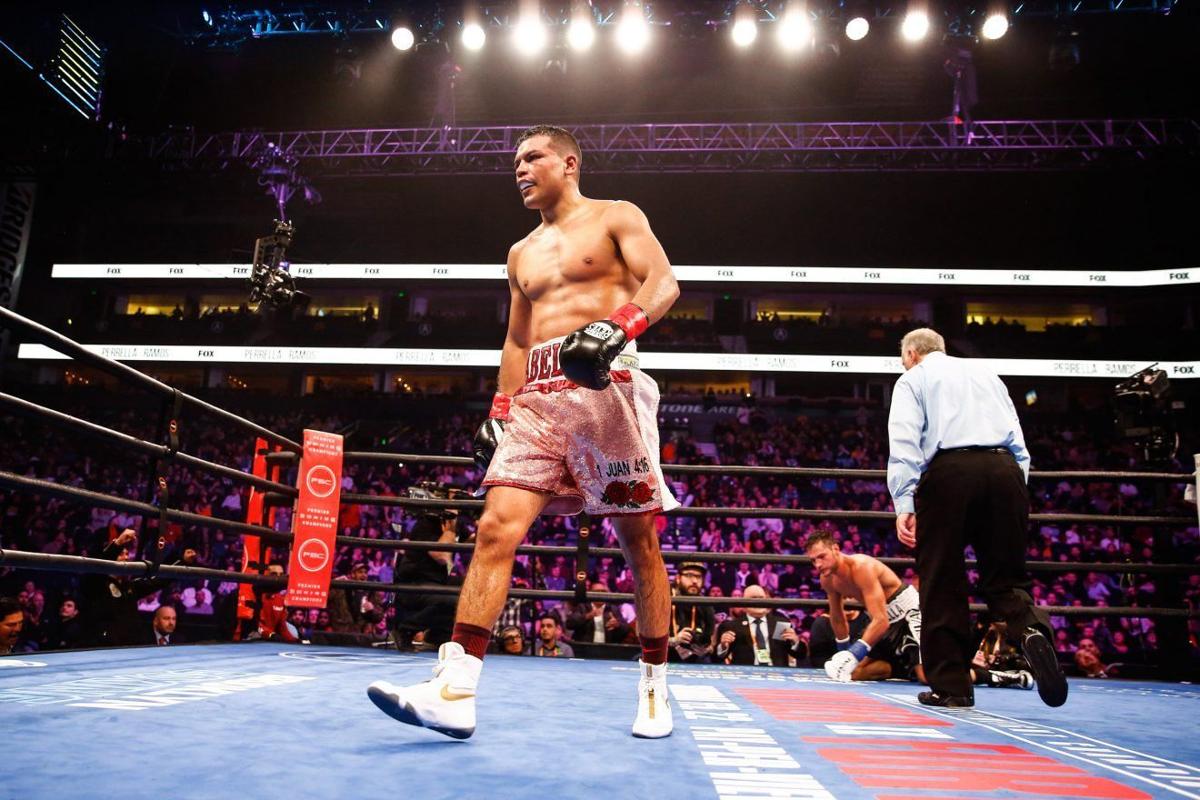 Abel Ramos walks to a neutral corner after knocking down Bryant Perrella during the 10th and final round of their welterweight bout Feb. 15 at Bridgestone Arena in Nashville, Tenn. Ramos won the fight by TKO with 1 second remaining. 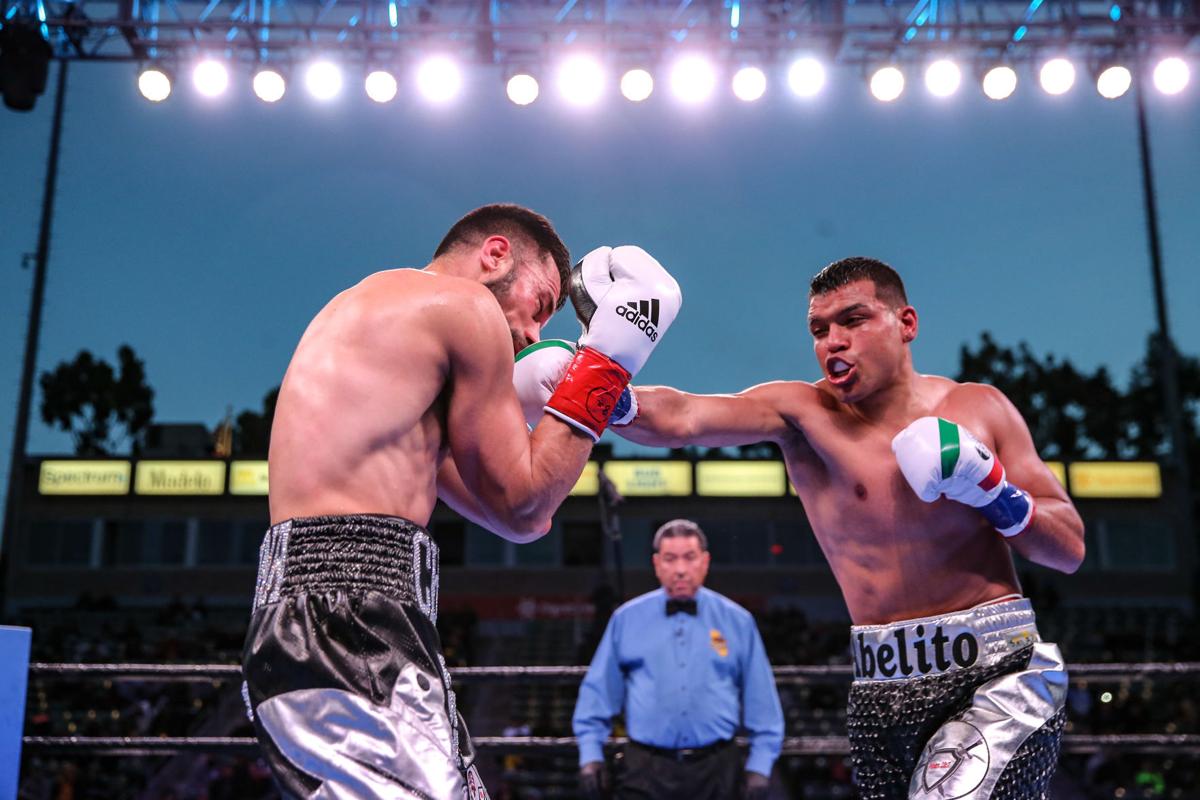 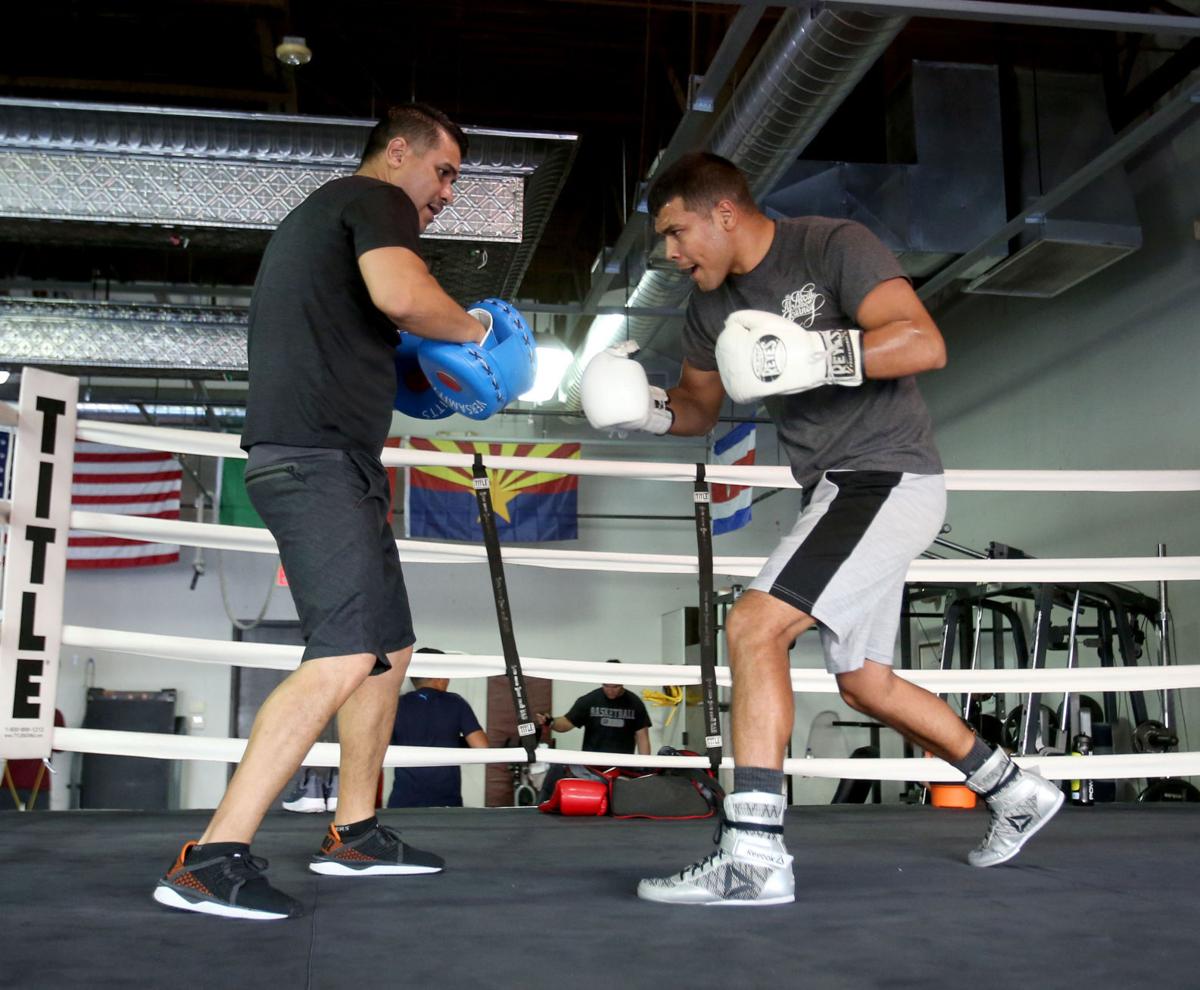 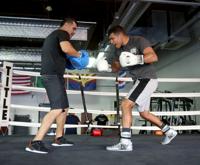 Abel Ramos walks to a neutral corner after knocking down Bryant Perrella during the 10th and final round of their welterweight bout Feb. 15 at Bridgestone Arena in Nashville, Tenn. Ramos won the fight by TKO with 1 second remaining.

LOS ANGELES — When Abel Ramos was just a kid, he dreamed of becoming a professional boxer and someday fighting for a world title. That day has arrived.

On Sunday, Ramos (26-3-2, 20 KOs) will fight Yordenis Ugas (25-4, 12 KOs) for the WBA welterweight title at Microsoft Theater in Los Angeles. It will be televised live on Fox starting at 5 p.m. Arizona time.

Ramos trained in Omaha, Nebraska, for the fight. While it seems an odd location to train, there was a specific reason for the decision. Omaha is home to the gym of Terence Crawford, the WBO welterweight champion.

At Crawford’s gym, Ramos had the opportunity to train with several other champion boxers. Crawford also provided Ramos with a nutritionist and a strength and conditioning coach.

“I think I’m gonna be in the best shape of my life,” Ramos told PinalCentral in a phone interview.

Ramos said he feels so good that he can’t wait to get in the ring. He wasn’t sure if a title shot would come this soon, but the 29-year-old from Casa Grande is eager to seize the moment.

In Ugas, Ramos is fighting a premier opponent. Ring Magazine ranks Ugas as the No. 7 welterweight in the world, and he has wins over contenders such as Jamal James (27-1, 12 KOs) and Thomas Dulorme (25-4-1, 16 KOs).

Ramos, a significant underdog according to the Vegas odds, is five years younger than the 34-year-old Ugas, who Ramos describes as a “come-forward fighter” and a skilled counter-puncher.

“I’ve been watching him for a long time now,” Ramos said of Ugas. “It will be a tough fight.”

One area where Ramos has an advantage is punching power. It makes Ramos dangerous even when he is behind on the scorecards.

Never was that more evident than in Ramos’ last fight against Bryant Perrella (17-3, 14 KOs) on Feb. 15 in Nashville, Tennessee.

Trailing on all three judges’ scorecards heading into the 10th and final round, Ramos needed a knockout. What appeared to be a sluggish performance by Ramos throughout the night was caused, he said, by an illness he had up to two weeks before the fight.

But Ramos floored Perrella with a wicked left uppercut late in the 10th round. After Perrella survived a standing eight-count, Ramos dropped him again with a right hand with just seconds remaining. The referee waved off the fight with one second remaining after a disoriented Perrella stumbled toward him after getting up.

“It let me know I can carry my power and still be strong in the later rounds,” said Ramos, adding he also learned to never take a fight when he is sick.

Ramos received plenty of rest after that fight, as the COVID-19 pandemic shut down his training routine for awhile. After getting rest, he trained harder than ever to put himself in the enviable position of fighting for a title belt.

The pandemic has been difficult on everyone in one way or another. For Ramos, it was stressful at times because it was always in the back of his mind — thinking about social distancing, sanitizing objects and constantly washing his hands.

And because of the pandemic, Sunday’s fight against Ugas will be held with no fans in attendance.

Ramos said it will probably feel weird during his walk up to the ring and the introductions. But after that, he won’t be thinking about it. He said once a fight starts, he blocks out everything else.

In fact, Ramos said an empty arena could work in his favor. He likes the quiet; it helps him focus.

Ramos said his biggest challenge against Ugas will be mental, making sure he outsmarts him and stays one step ahead of him strategically.

And if fighting for a world title wasn’t enough, the night will be even more special for Ramos because his nephew, 19-year-old Jesus Ramos, is fighting on the undercard in another welterweight bout.

“It’s super cool,” Ramos said of fighting on the same card with his nephew. “It’s been real good having him here in training camp ... we just keep pushing each other.”

Ramos is also trained by his older brother, Jesus Ramos Sr. It’s a family affair in several ways, which makes Ramos very proud. And he said his nephew is going to do “big things” in the sport.

There’s just one goal for Ramos when he enters the ring against Ugas on Sunday, and that’s winning a world title — and the championship belt that comes with it.

“Gonna bring it back home to Casa Grande,” he said.