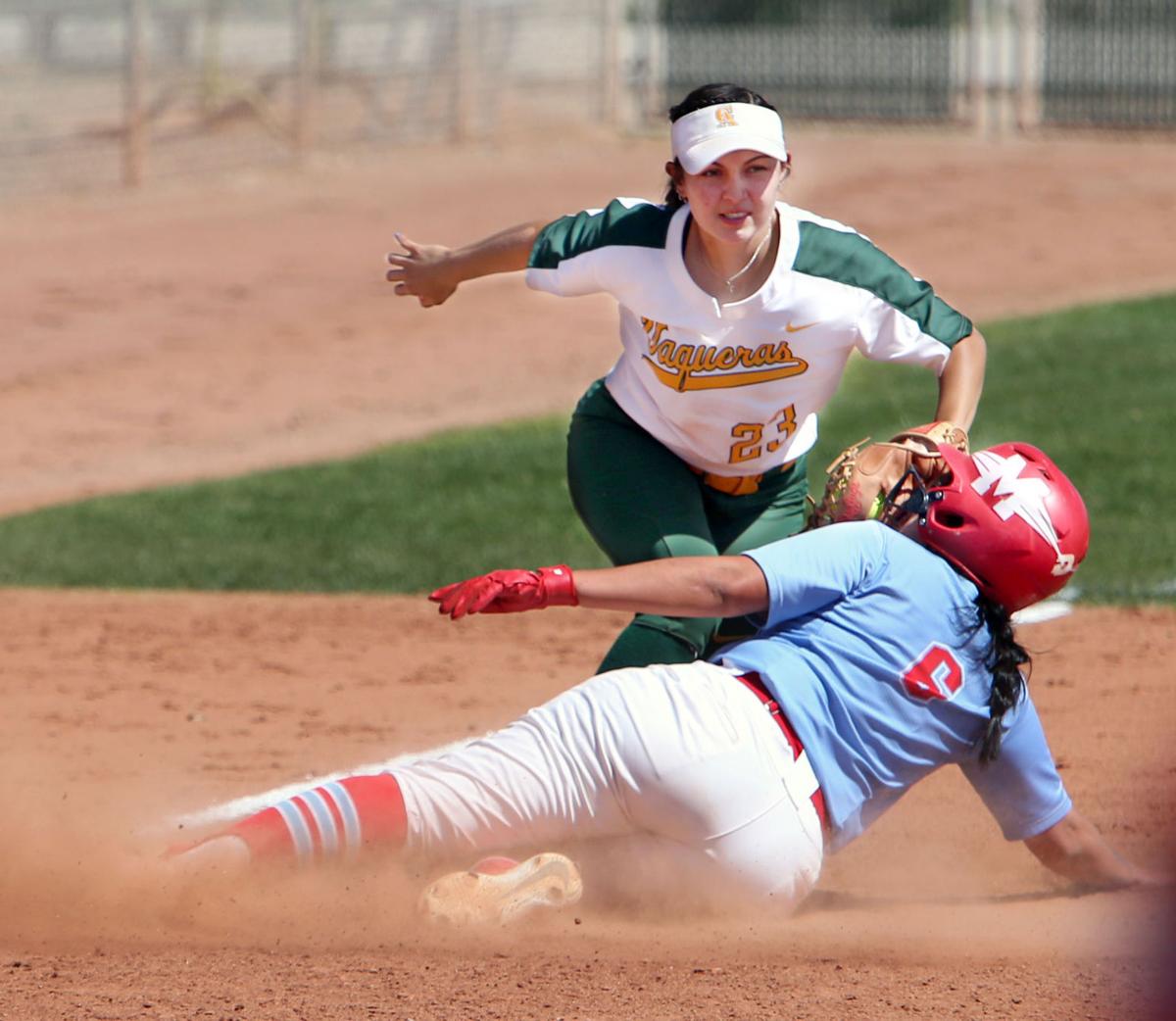 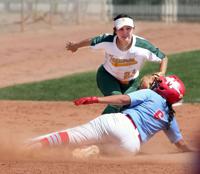 Central Arizona College third baseman Nicol Ley, 23, tags out Mesa's Nycole Medina in the fifth inning of the first game of a March 16, 2019, doubleheader at CAC. 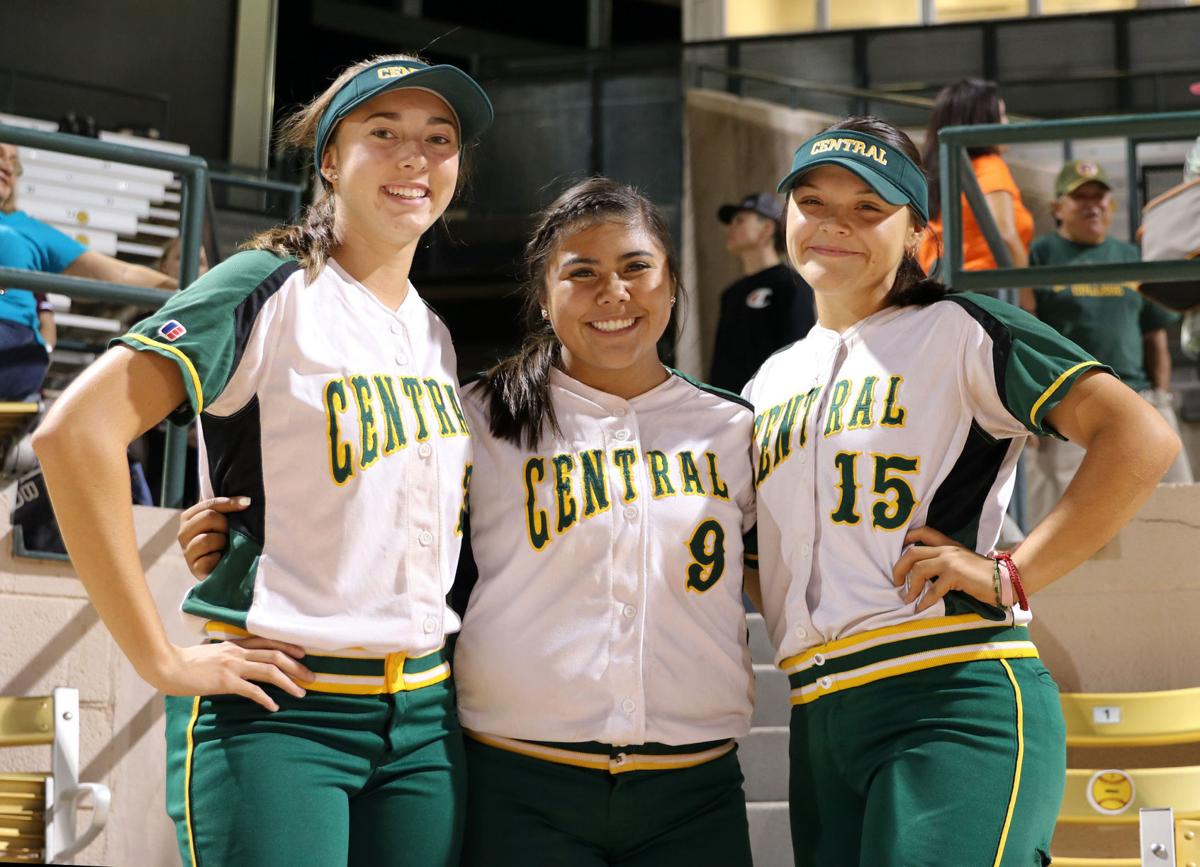 Central Arizona College third baseman Nicol Ley, 23, tags out Mesa's Nycole Medina in the fifth inning of the first game of a March 16, 2019, doubleheader at CAC.

SIGNAL PEAK — Having five pitchers on the roster is a rarity in softball’s upper echelons. Central Arizona College will have that luxury when the season begins Feb. 4.

“That’s our number one strength,” sixth-year CAC coach Shelby Davis said. “They all come with something a little different.”

The potential to pack a wallop, along with lineup flexibility, will also be helpful as the Vaqueras look to qualify for nationals for the second time under Davis. She enters her sixth season with a 177-95 record at CAC.

Only a month will have elapsed prior to the opener since Central began practice. The absence of fall-ball competition makes assembling talented athletes into a viable unit more difficult, but that is the reality for every team in the Arizona Community College Athletic Conference.

“We’re just starting to see where we’re really at,” Davis said. “The girls are resilient. They’re in good shape and catching up really quick.”

The coronavirus pandemic put a premature end to the 2020 season. The Vaqueras were 17-10 overall and 13-5 in ACCAC play following their final game March 5.

“We’re not taking anything for granted,” Davis said. “Everybody had something taken away from them.”

The top returning position player is Nicol Ley, who likely will start at second base. Ley batted .506 with 19 RBIs and 11 extra-base hits (seven doubles, one triple, three home runs) in 2020.

Two of the three outfield positions also are set to be occupied by returners. Sonia Solis (.393, 12 RBIs, two homers) is coming off rotator cuff surgery and is slated to play right. The left fielder is Danielle Farinas (.320, 12 RBIs).

Evelyn Roman did not play for CAC last year. The first baseman was a major offensive force for the Vaqueras in 2019, batting .419 with 51 RBIs, 25 doubles and six home runs.

Battling for the other starting positions are CG Union alum Kirsta Wright and Logan Kelly in center field; Serinah Sanchez and Cheyenne Hudson at shortstop; Emily Churchill and Coolidge alum Tatiyana Rushing at third; and Isabella Garcia and Brooke Williams at catcher.

Belting balls into the gaps and/or going deep could become a common occurrence for the Vaqueras this season.

“This is the most power we’ve had since I’ve been here,” Davis said.

And she won’t be hesitant to adjust the lineup.

“We’ve got a lot of girls who can play multiple positions, which gives us options,” she said.

After playing a few games during a tournament in Yuma on Feb. 4-6, the Vaqueras take on Eastern Arizona in a nonconference doubleheader Feb. 20. What follows are 16 games against the Division I region teams (four each against Eastern, Arizona Western, Pima and Yavapai) and two apiece against the D-II teams (Phoenix, Scottsdale, Glendale, Mesa, South Mountain, Paradise Valley, GateWay and Chandler-Gilbert).

Fans will not be allowed to attend games due to coronavirus restrictions.