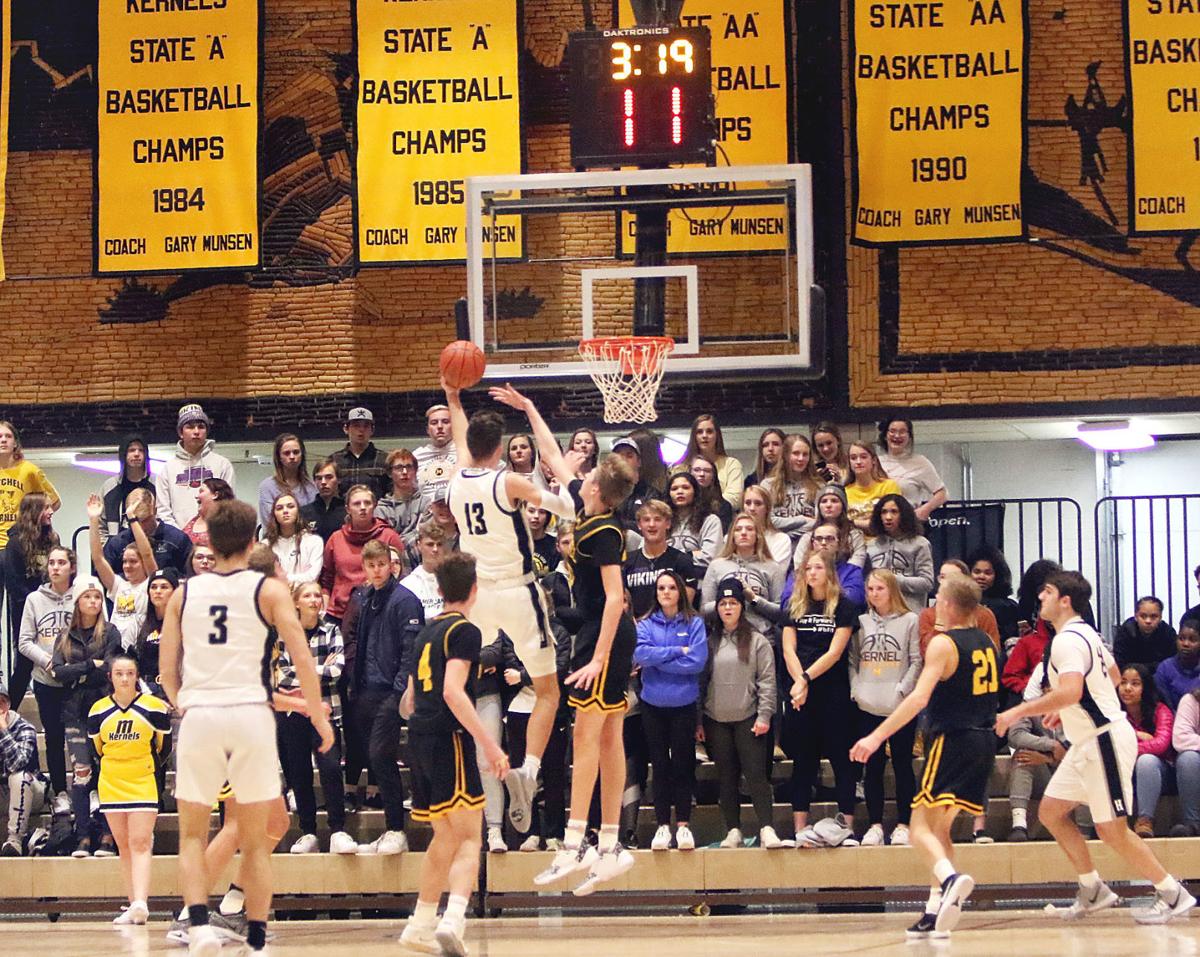 Mason Miller of Houston High School of Germantown, Tennessee, and son of former NBA player Mike Miller, goes up for a shot against his father’s high school Mitchell High (South Dakota) during a game in December as part of the Hoop City Classic at the Corn Palace in Mitchell, S.D. South Dakota is one of eight states that has a 35-second shot clock in high school basketball. 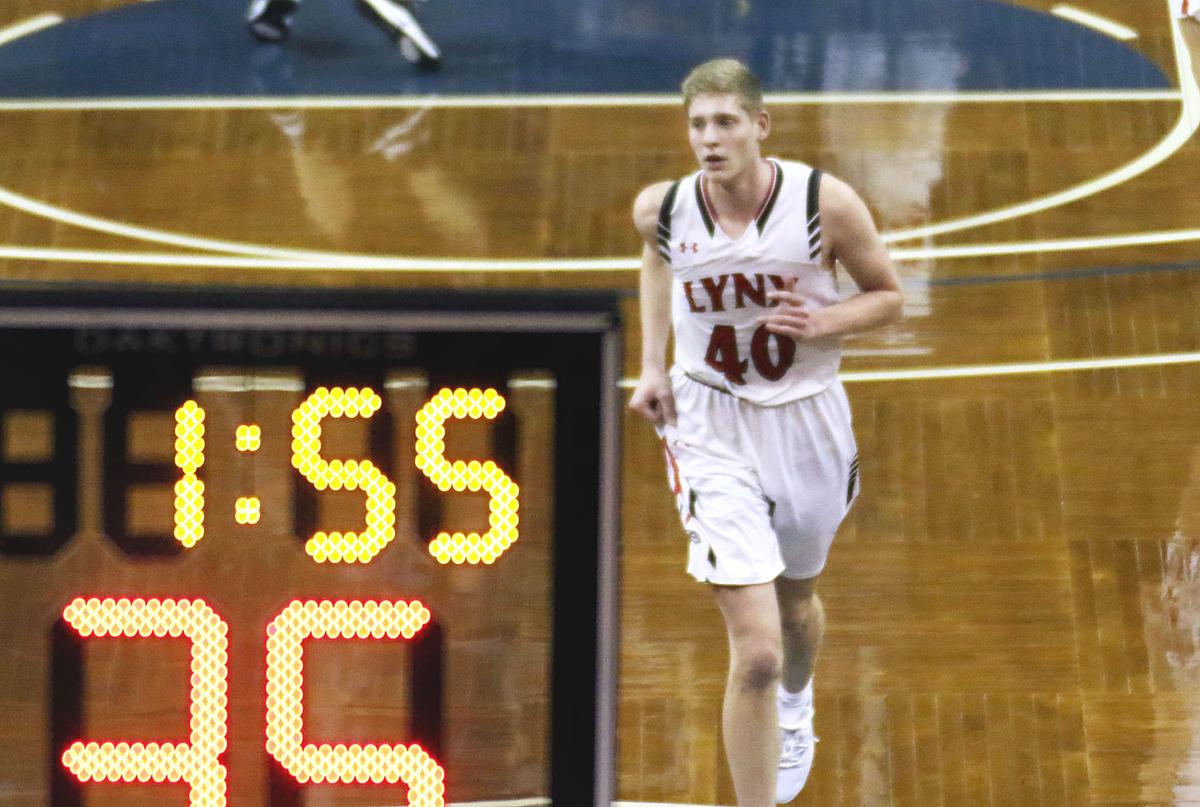 Brandon Valley High’s (South Dakota) Gavin Terhark heads back on defense following a shot during the Hoop City Classic basketball tournament in December at the Sanford Pentagon in Sioux Falls, S.D. South Dakota is one of eight states to have a 35-second shot clock in high school basketball.

Mason Miller of Houston High School of Germantown, Tennessee, and son of former NBA player Mike Miller, goes up for a shot against his father’s high school Mitchell High (South Dakota) during a game in December as part of the Hoop City Classic at the Corn Palace in Mitchell, S.D. South Dakota is one of eight states that has a 35-second shot clock in high school basketball.

Brandon Valley High’s (South Dakota) Gavin Terhark heads back on defense following a shot during the Hoop City Classic basketball tournament in December at the Sanford Pentagon in Sioux Falls, S.D. South Dakota is one of eight states to have a 35-second shot clock in high school basketball.

CASA GRANDE — It’s a part of the game common with the NBA and college basketball, but not so much in high school — a shot clock.

However, that will change this year as the Canyon Athletic Association decided to implement a shot clock for its Open Division that includes both national and varsity high school teams.

But when it comes to the Arizona Interscholastic Association, the state’s largest high school governing body, the use of a shot clock is not in the cards, at least for now.

Earlier this month the National Federation of High School sports voted down a proposed 35-second shot clock. However, that hasn’t stopped eight states including California, Maryland, Massachusetts, New York, North Dakota, Rhode Island, South Dakota and Washington from going on their own and implementing one. The result of those states going against the NFHS has cost them representation on NFHS committees.

And that representation is one of the sticking points for AIA executive director David Hines because every member school has to abide by the rules set in place by the NFHS.

“If you modify the rules, you have no opportunity to have a voice on the (NFHS) rules committee,” he said.

Many coaches would like to see a shot clock implemented by the AIA, including Vista Grande boys coach Hank Bias.

“I certainly hope that at some point before my career is over, that high school will have a shot clock,” he said. “I think it would be a good thing for everyone.”

Under the CAA rule, the league’s Open Division will play with a 35-second shot clock. It will reset to 20 seconds after an offensive rebound and it will not reset with a team foul, but would reset to the full 35 seconds if a foul occurs in the backcourt.

“I’m open minded on it; I believe that it’s not going to make much of a difference in my opinion,” Casa Grande Union athletic director Randy Robbins said. “Eighty percent of the time these kids don’t hold the ball. They are more (in) motion. With the 3-point line and the way the kids are going to the basket, you can’t put your hands on them like they used to.”

Bias and Robbins agree the biggest hurdle of implementing the shot clock is the cost. For some schools, the scoreboard is not capable of having a shot clock and as a result a new scoreboard might have to be purchased.

Hines said the shot clock itself is not the only cost, as it would take a three-person officiating crew (regular season crews are two people), and a shot clock operator would be needed at every game.

“You have to have the infrastructure, and the set up for each school is different. That’s the first problem,” Robbins said. “The second problem is trying to find someone to do it. But you have to train more than one person (to run the shot clock) just in case someone is not there ... That will be tough for ADs.”

Bias echoed Robbins’ sentiment about added costs and the difficulty for some schools of finding someone to operate the shot clock.

“I’m mostly concerned about the schools that don’t have as much help for the scorer’s table,” Bias said. “Sometimes somebody doesn’t show up or they are short on people, it gets difficult.”

Despite the challenges, Bias and new CG Union girls coach Kevin Hubbard feel the shot clock would change the game in a big way.

“A shot clock would make teams have to be better than they are now,” Hubbard said. “It requires you to get into offensive sets faster to get good shots. The defense is rewarded for playing strong solid defense with a shot clock.”

Hubbard also acknowledged the money side and added it might be harder for a lot of the smaller AIA schools to pay the associated costs.

Bias, who has been coaching at Vista Grande for the past four years, said he loves the idea, as long as everyone is playing by the same rules.

“If you are a good coach and you know how to control time and score at the end game and if your players are well versed with it, you do have an advantage if you have no shot clock,” said Bias, who prior to becoming the Spartans coach, had successful coaching stints in Ohio. “It’s really difficult to get back into the game if there’s no shot clock.”

Bias added that he’s been on both ends of the spectrum when it comes to the shot clock. He recalled a time during his coaching days in Ohio where a team held the ball for about a minute and half on every possession and the teams only made it to the 40s. Then there was the time at Vista when the Spartans scored 51 points in a half.

While Bias is in favor of it, Robbins doesn’t see the need for it.

“The tempo of the game and the way the rules have been changed for the offense and the defense can’t really impede the offense,” said Robbins, who has been officiating basketball games for the past 15 years. “To me, I don’t think it really makes a difference.”

Robbins added he could see it making a difference in the semifinals of playoffs when the teams are better and the competition is stronger.

As for the AIA following suit from the CAA, Robbins said it could lead to the AIA looking into it but adds with nearly 300 schools having to vote on it, he said shot clocks coming to the AIA is unlikely to happen anytime soon.

“You are going to have a lot of ADs that don’t want to fork out the resources to manage it,” he said.

Starting this past school year, Wisconsin became the latest state to have a shot clock when it implemented a 35-second clock.

In 2007, South Dakota started using the shot clock for its highest class of schools, and over the next 10 years, it trickled down to the other classes.

It’s something Robbins said could happen in Arizona where the 6A and 5A schools might have a shot clock to start and eventually it falls down to the other conferences.

“I could see that where maybe 6A and 5A because of the resources,” he said. “I could probably do it because our scoreboard, we could hook up a shot clock to it because we just bought it a couple of years (ago).”

While the CAA will make history this winter by bringing the shot clock to Arizona prep basketball, the AIA has no current plans to do the same. Bias said the trend is moving toward having a shot clock in high school basketball.

“But it all comes down to being able to pay for it and getting it installed and getting people to run it,” he said. “Those three things at the high school level are not always that easy.”

The Arizona Interscholastic Association can take its basketball product to new heights. How?…