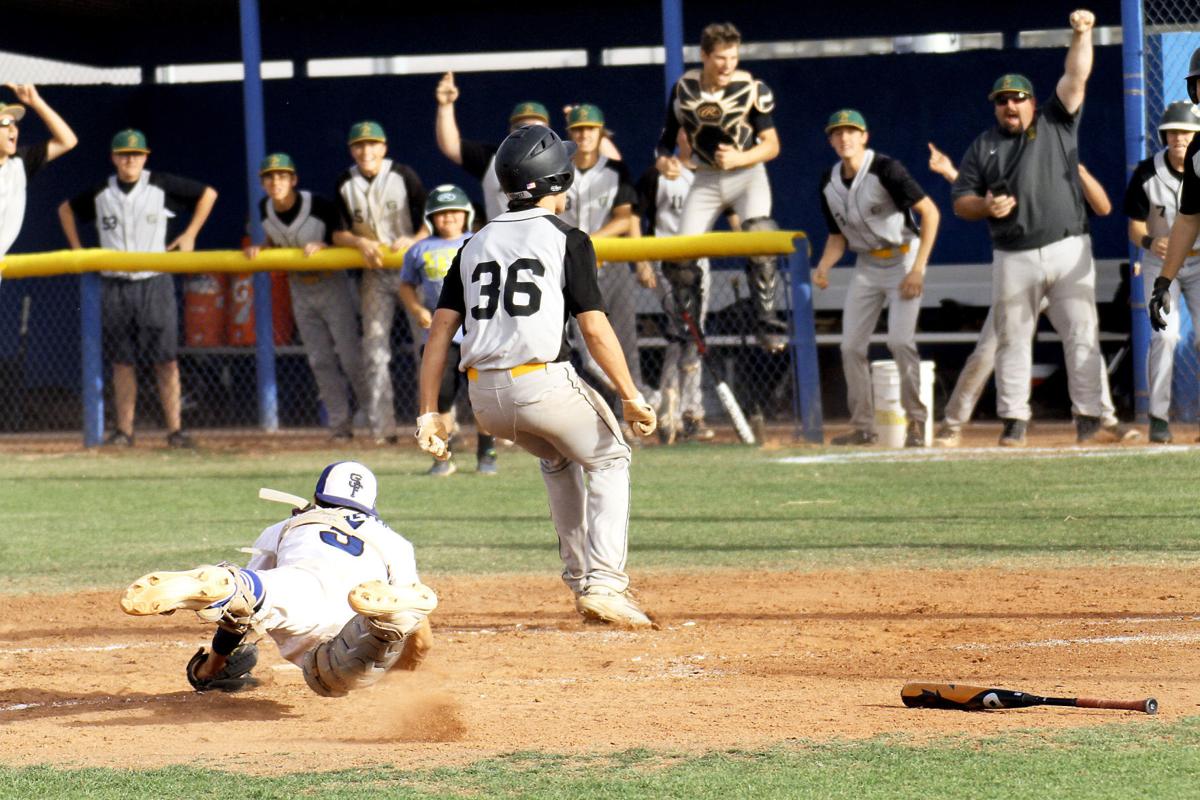 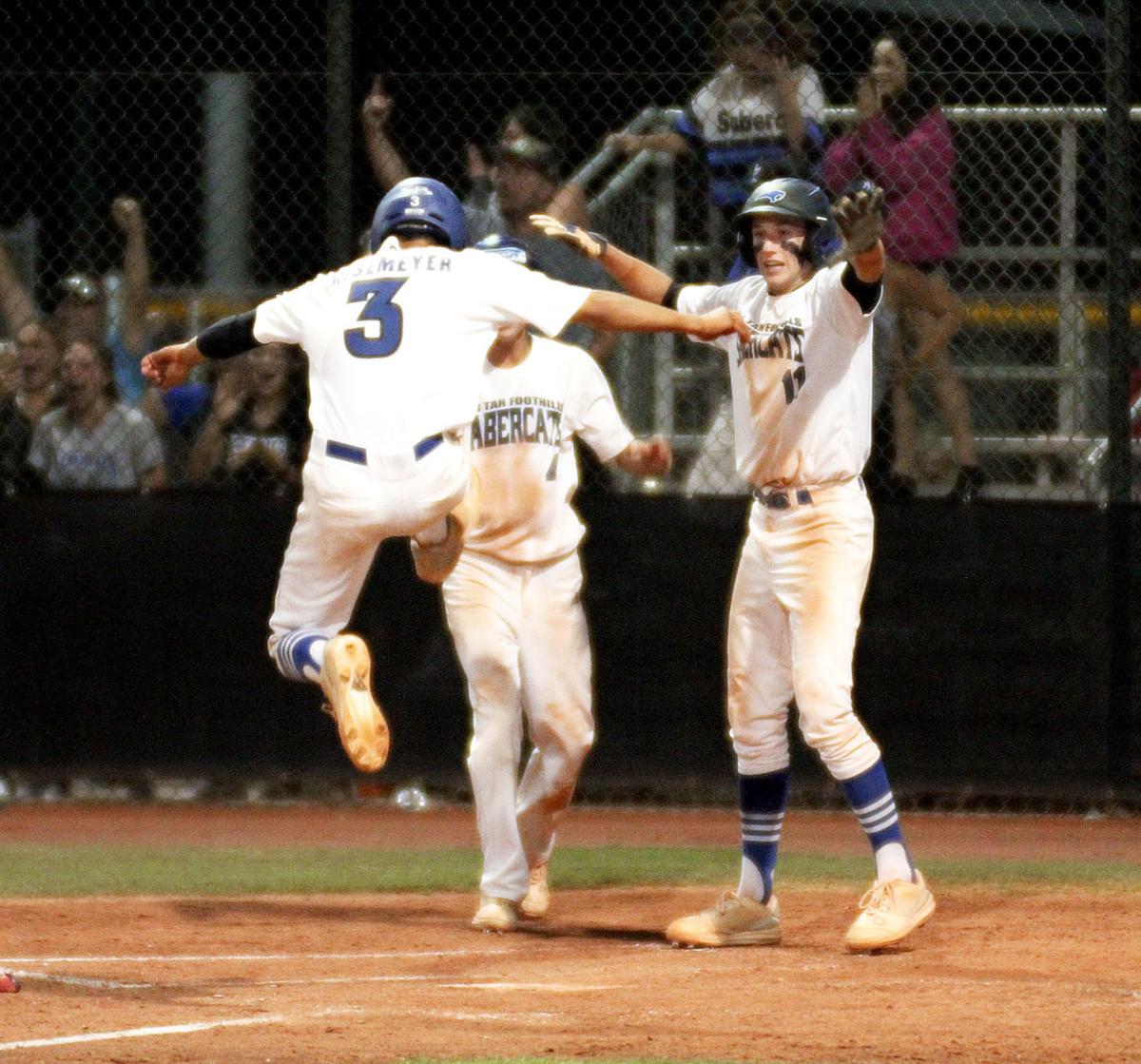 San Tan Foothills’ Logan Biesemeyer, (3), leaps onto home plate to celebrate with teammates Trevyn Badger, (11), and Dylan Barrier, (4), after scoring from first in the top of the eighth inning on a bases-loaded double by Frankie Gulko that gave the Sabercats a 5-2 lead over top seed Gilbert Christian in the 2A state semifinals on the backfields of the Cleveland Indians’ spring training complex May 11 in Goodyear. The Sabercats won 5-3 to advance to the 2A championship game. 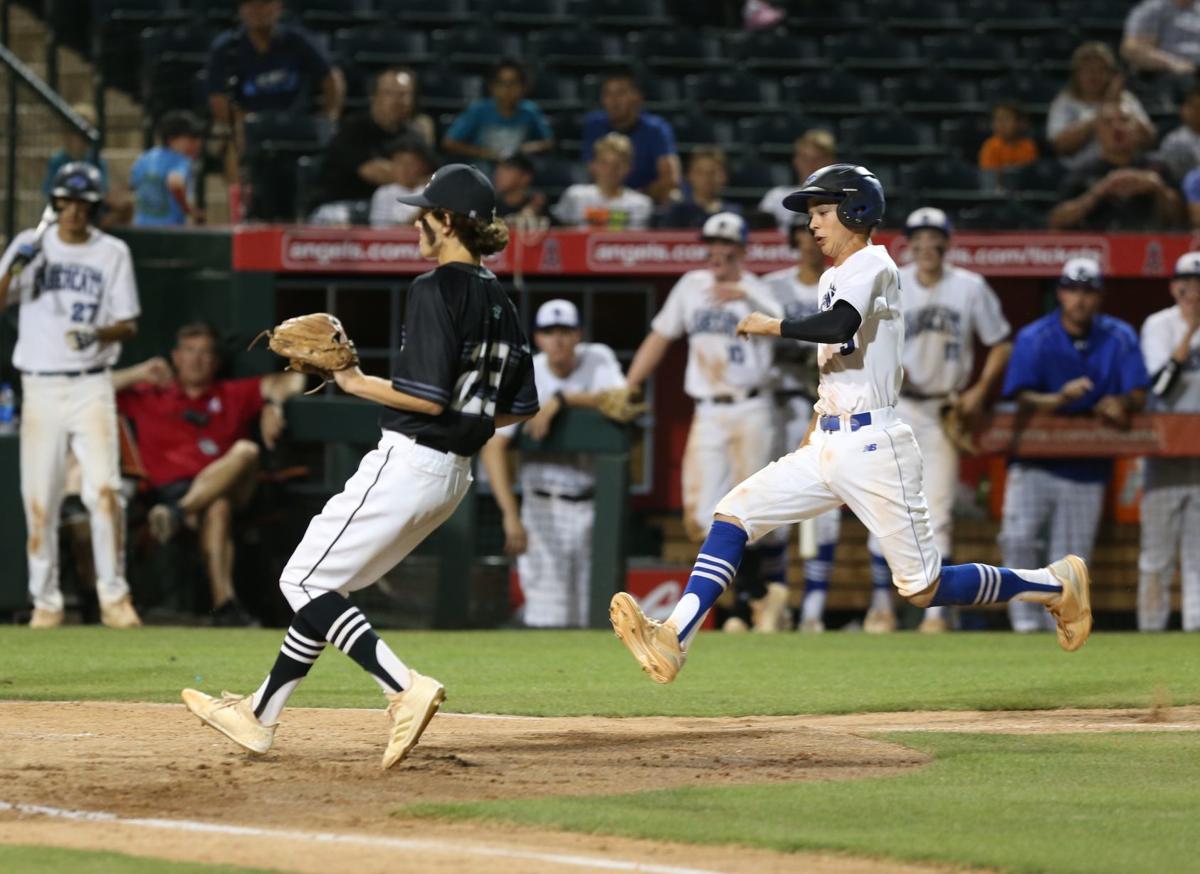 San Tan Foothills’ Logan Biesemeyer, (3), leaps onto home plate to celebrate with teammates Trevyn Badger, (11), and Dylan Barrier, (4), after scoring from first in the top of the eighth inning on a bases-loaded double by Frankie Gulko that gave the Sabercats a 5-2 lead over top seed Gilbert Christian in the 2A state semifinals on the backfields of the Cleveland Indians’ spring training complex May 11 in Goodyear. The Sabercats won 5-3 to advance to the 2A championship game.

But from the disappointment comes a special lasting bond he will have with his fellow seniors and his team, and it will provide something to talk about during class reunions.

“It made us closer as a team because ... we will have something to talk about, so it really helped us bond even more,” Biesemeyer said.

Biesemeyer, a catcher, is one of four seniors for San Tan Foothills, which saw its promising season dashed last week when the Arizona Interscholastic Association canceled the remainder of the spring sports season after Gov. Doug Ducey announced that schools would remain closed for the rest of the academic year.

For the Sabercats, the news hit especially hard after the successful run the program has had in the last three years. A success that included a trip to the 2A state championship game during Biesemeyer’s sophomore year in 2018 and last season’s disappointing early exit in 3A playoffs.

This year was supposed to be different. Instead, it will be a haunting memory of what if.

“You can feel when you have a good team and you can feel the chemistry,” Biesemeyer said. “It definitely felt like that with our team. Nobody had to say it because we all felt it. We knew we were good.”

The good news for Biesemeyer is he’s not alone. Like many high school seniors across the country whose seasons have been canceled because of the virus, he will have something something to look forward to next season when he’s a freshman at Loras College, a Division III school in Dubuque, Iowa.

“I’m really grateful that I have the opportunity,” he said of playing college baseball.

Biesemeyer said he got a recruiting coordinator and flew to Iowa where he visited a couple of schools. He settled on Loras College after being promised more playing time.

“There was a couple of D-II (schools), but I wasn’t going to play as much as I was going to play [at Lomas],” he said. “Not to mention they really needed a catcher, and the coach showed that he really loved me.”

Besides the playing time, the decision to choose Loras also made sense from an academic standpoint for Biesemeyer.

“That was really impressive. I’m really good at business,” he said. “It comes natural for me, so it seems like a perfect fit. It really just worked out for me.”

While Biesemeyer is getting ready to begin a new chapter in his playing career, he also looks back at the team he’s leaving and knows the Sabercats are in good hands.

“We (seniors) definitely set the pace, but I’m so impressed with the freshmen that we have,” he said. “Half of them inspired so many seniors, including me, to do some extra work.

“The way they were fresh at the game and excited to be there. It was really inspirational. I can’t wait to see what these freshmen can do because they are some the hardest workers. They work harder than anyone I know, and this freshman class is definitely going to be amazing in a few years.”

Perhaps it will be the freshmen who will give the seniors the one thing that was taken away from them — the chance to play for a state championship.

“Yeah, I think they already know that,” Biesemeyer said. “There is already talk in the group chat. I think in a few years, we will be ready to get that state title and I’ll be right there supporting them. If I can (physically) or virtually or whenever I can come to practices and help them out. They are a great group of kids.”