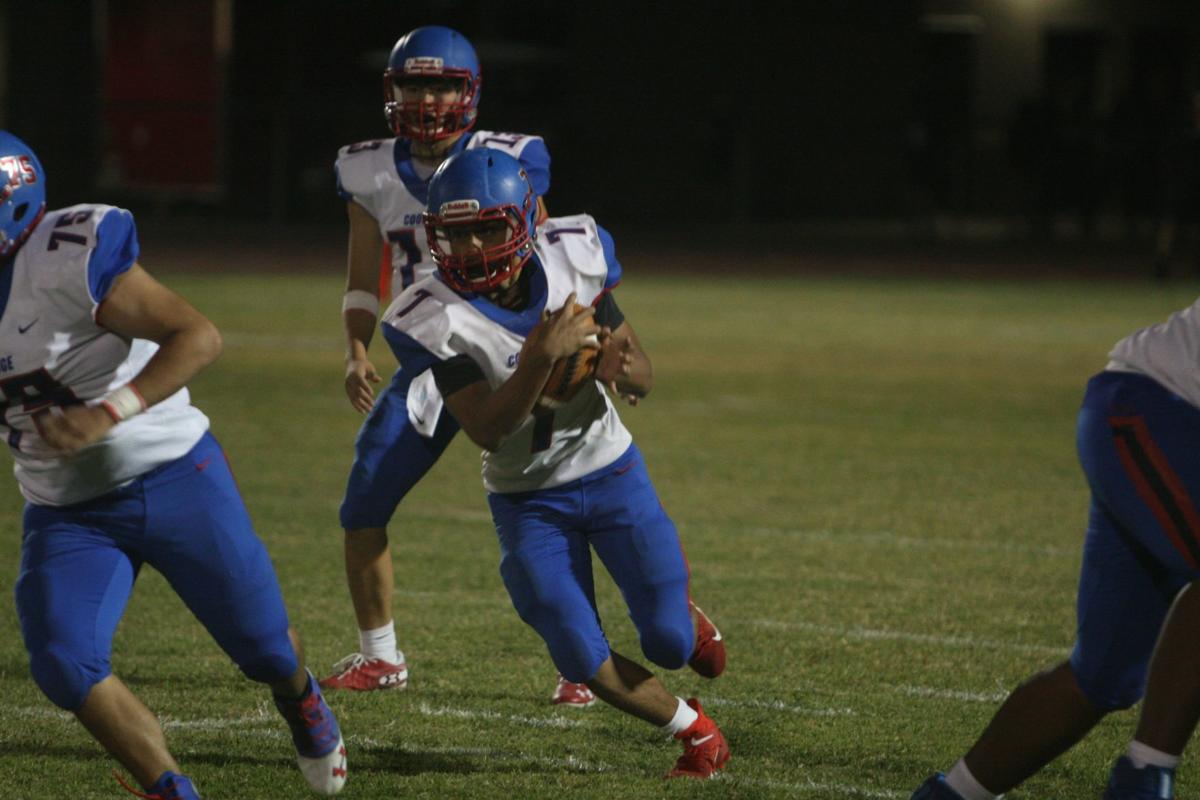 Coolidge running back Greg Rodriguez looks for a gap in the American Leadership Academy-Ironwood defense on Friday night. 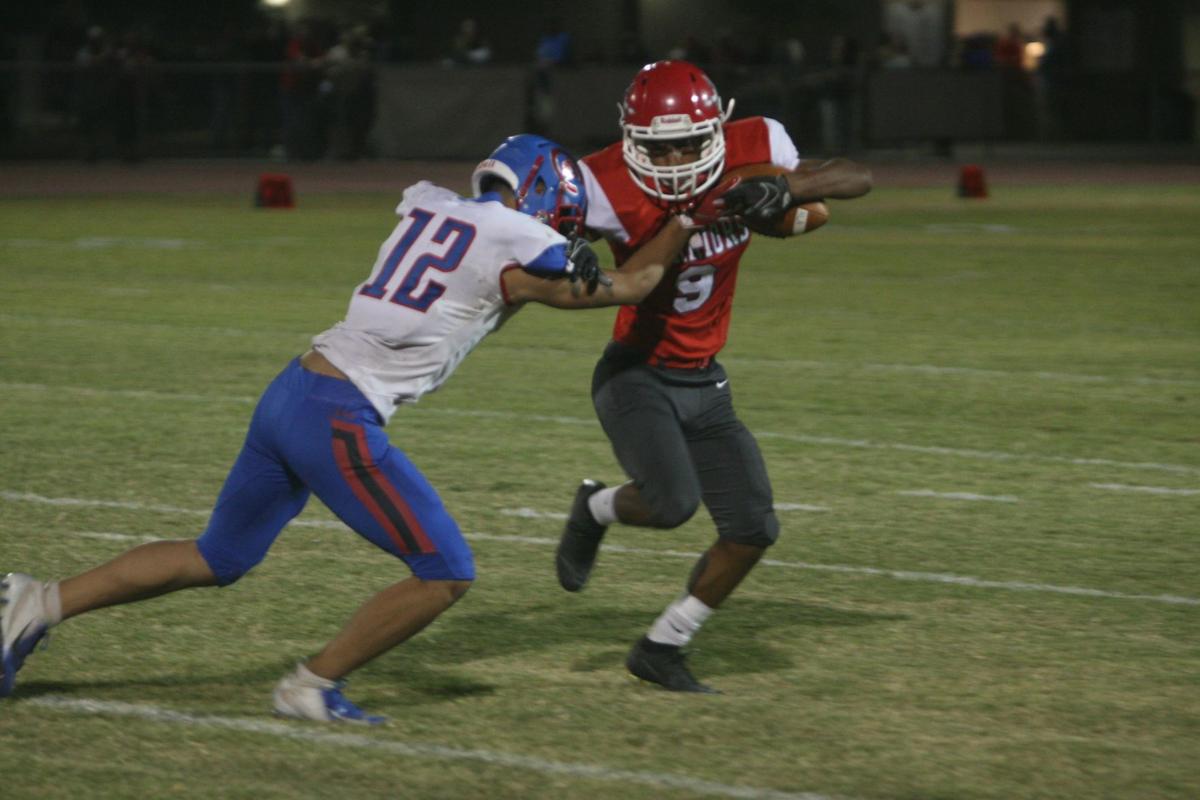 American Leadership Academy-Ironwood wide receiver Christian Hardenburg tries to get some yards after the catch against Coolidge on Friday night. 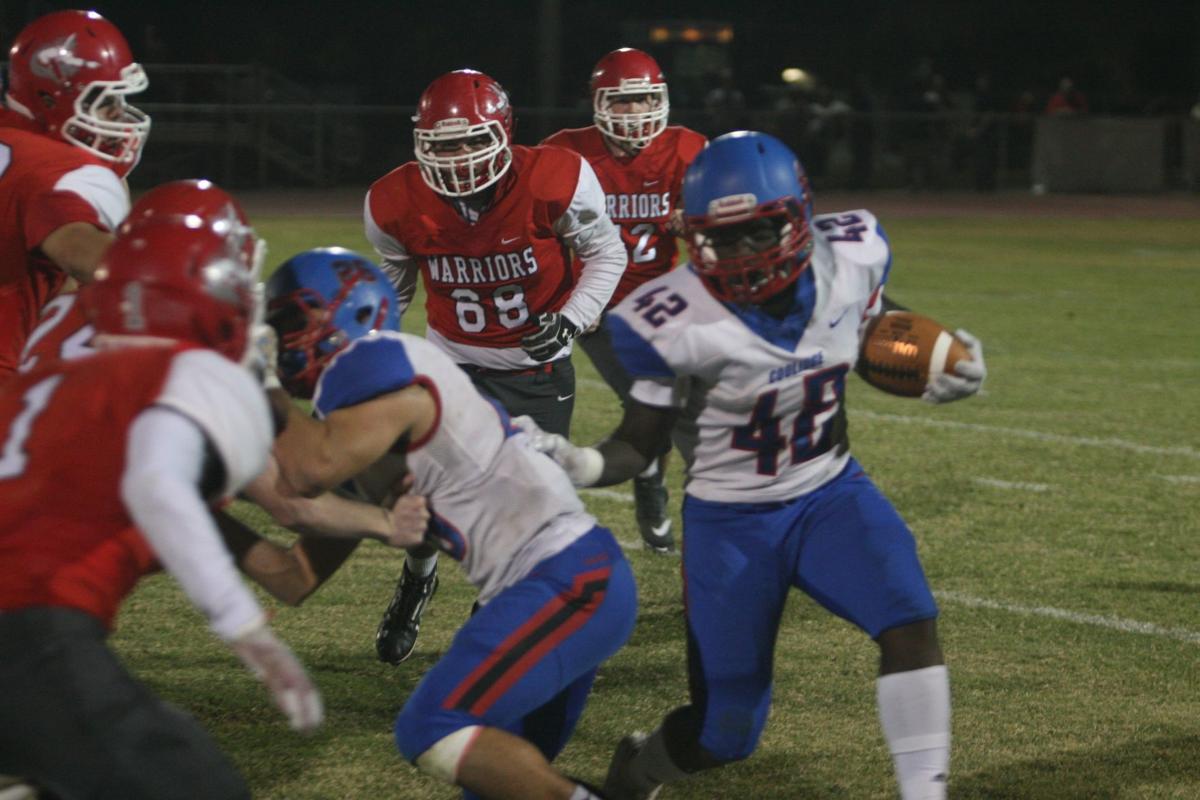 Coolidge running back Greg Rodriguez looks for a gap in the American Leadership Academy-Ironwood defense on Friday night.

American Leadership Academy-Ironwood wide receiver Christian Hardenburg tries to get some yards after the catch against Coolidge on Friday night.

QUEEN CREEK — In a game against a team still searching for its first win, the Coolidge Bears were expected to score early and often. It was surprising, then, when their running attack was shut down early. But the team knows the talent it has, and that if it just keep working, the production would come.

And so it did. Behind seven rushing touchdowns, including a career-high three for sophomore Comar Jeffries, Coolidge (7-1, 2-1 3A Central) was able to pull away from the American Leadership Academy-Ironwood Warriors (0-8, 0-3 3A Central) for a win 55-15.

“It’s hard to motivate kids when they see some teams, even though that’s a good football team over there with kids who are trying hard,” Coolidge coach Rodger Schenks said. “They did a good job of keeping us off balance, but we were able to make some adjustments.”

With the offense coming out a bit flat, it was quarterback Valentine Rodriguez who once again stepped up to get the Bears going. He faked a handoff then ran the ball himself 39 yards for a touchdown. That seemed to wake up his teammates a bit, as Greg Rodriguez on the next drive put three big runs together, include a 16-yard touchdown run.

Jeffries carried a lot of the load after that, scoring three of the team’s next four touchdowns. He finished the game 101 yards rushing, while Greg Rodriguez had a game-high 139 yards and two scores.

Malachi Rodriguez made a big impact on defense for the Bears, forcing two turnovers. The first was a fumble where he simply muscled the ball away from the Ironwood carrier. He then followed that up with an interception that almost resulted in six points.

Indeed, the pressure was consistently present for Warriors quarterback Kyle Johnson. But the junior was able to withstand a lot of that outside of the interception. He completed 11-of-20 passes for 141 yards and two touchdowns.

The first touchdown came on a screen with three linemen in his face, but he was still able to find Jake Maloy, who ran the ball the remainder of the 38 yards to put Ironwood on the board. The second was a 55-yarder to Andrew Fearn.

In a season in which the playoffs are out of the picture and in a game in which the outcome was already decided, these kinds of plays meant a lot to Warriors coach Travis Epperson.

“I think they really want to be part of something special,” he said. “I think they want to be good. You’re guaranteed 10 games and in each game you get 48 minutes. So we want to use all 48 of those minutes to keep getting better. We’re just taking pride that we’re fighting until the end. They want that to be our identity.”

The Bears now enter their bye week before returning to Coolidge for their last home game of the season against San Tan Foothills. Schenks said he was concerned with some of the run defense he saw from his team, so he sees this as an opportunity to put in a lot of work to return to the style of “old-school football” he likes to play.

“We’ll pick up the physicality a little bit and really go back to basics,” Schenks said. “We’re going to hit because they can go to the trainer after and get all the ice they want.”