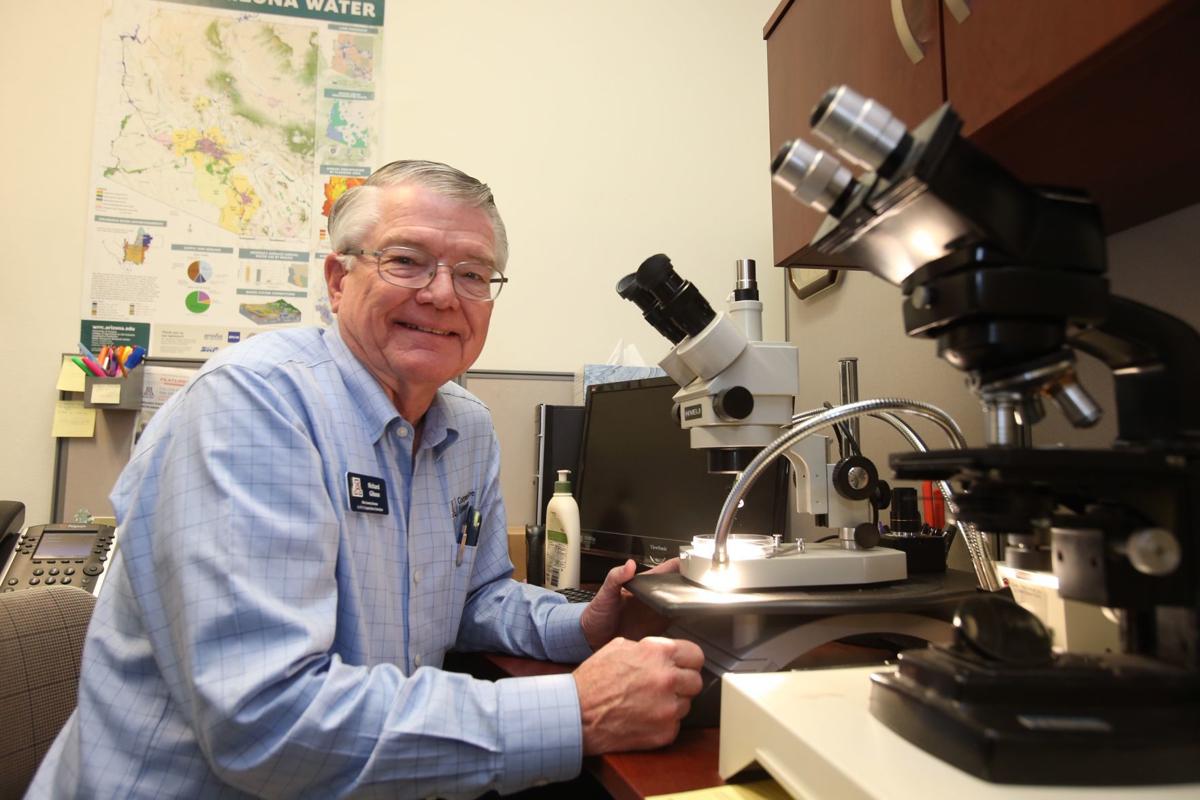 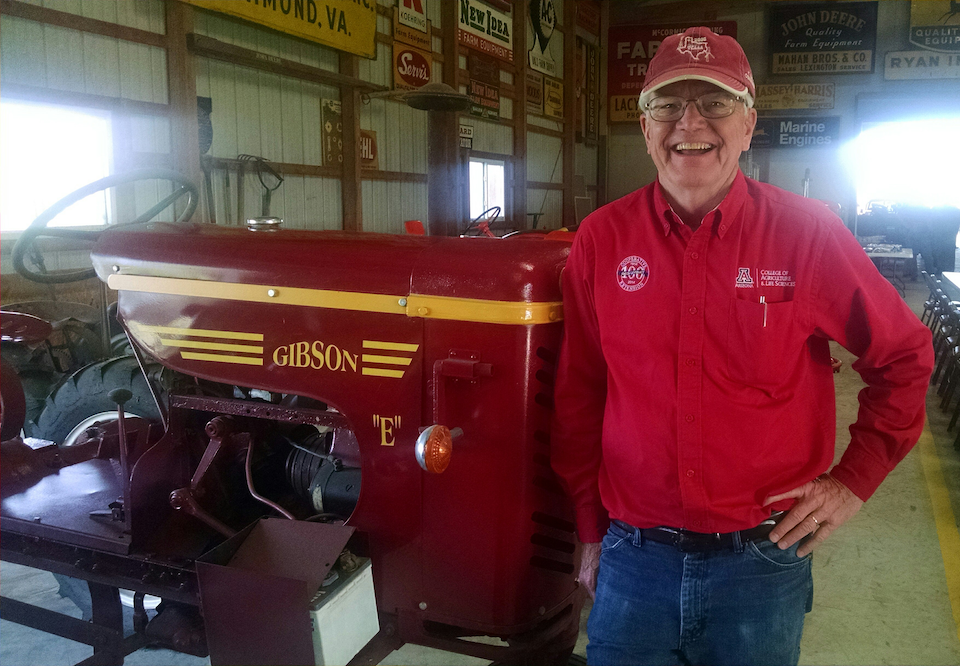 County Extension Agent Rick Gibson admires an antique Model “E” Gibson tractor on a tour of a Virginia farm while serving on the national board of the National Association of County Agricultural Agents in 2016. 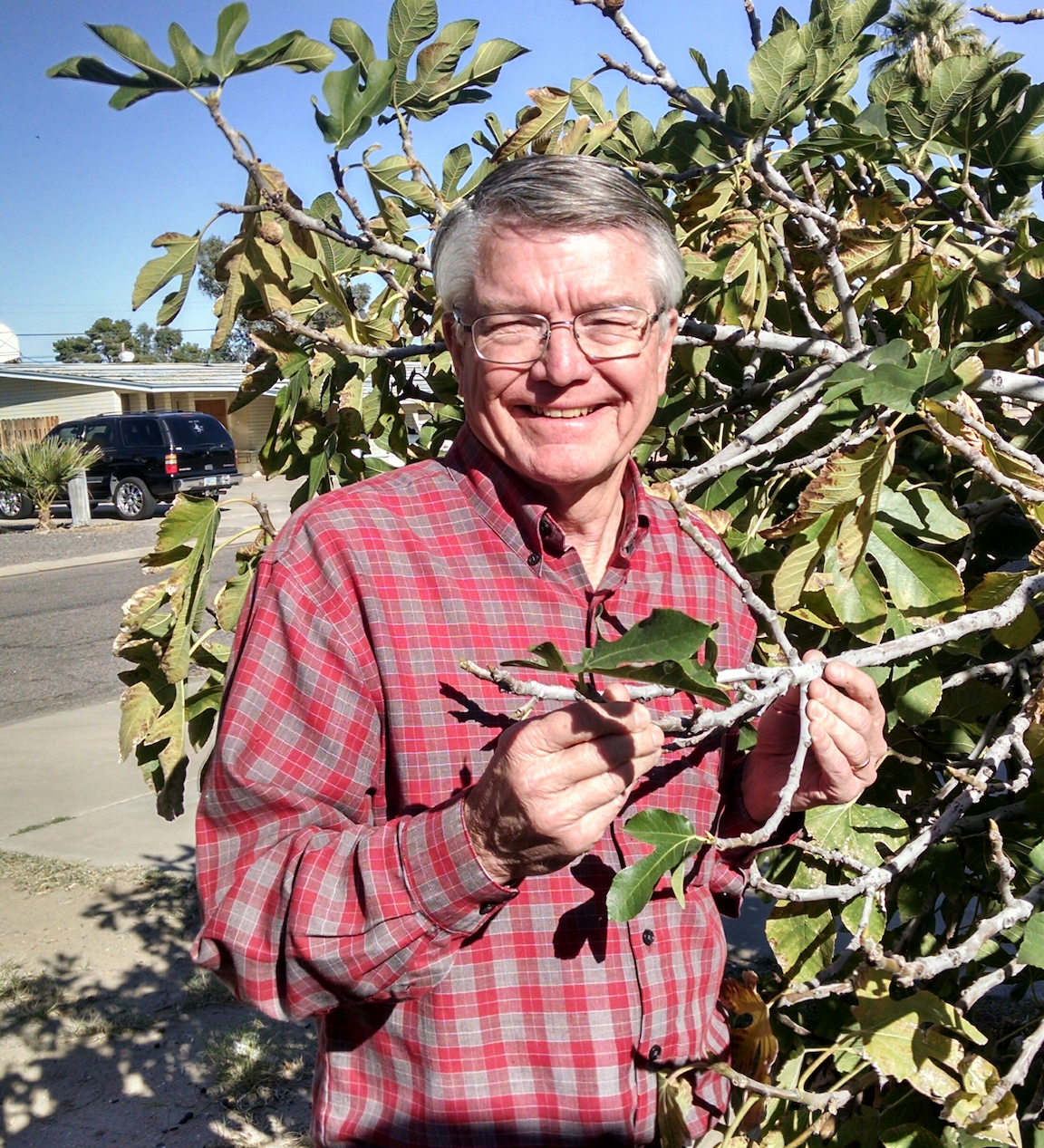 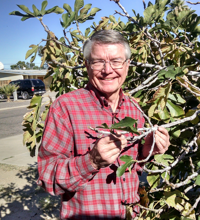 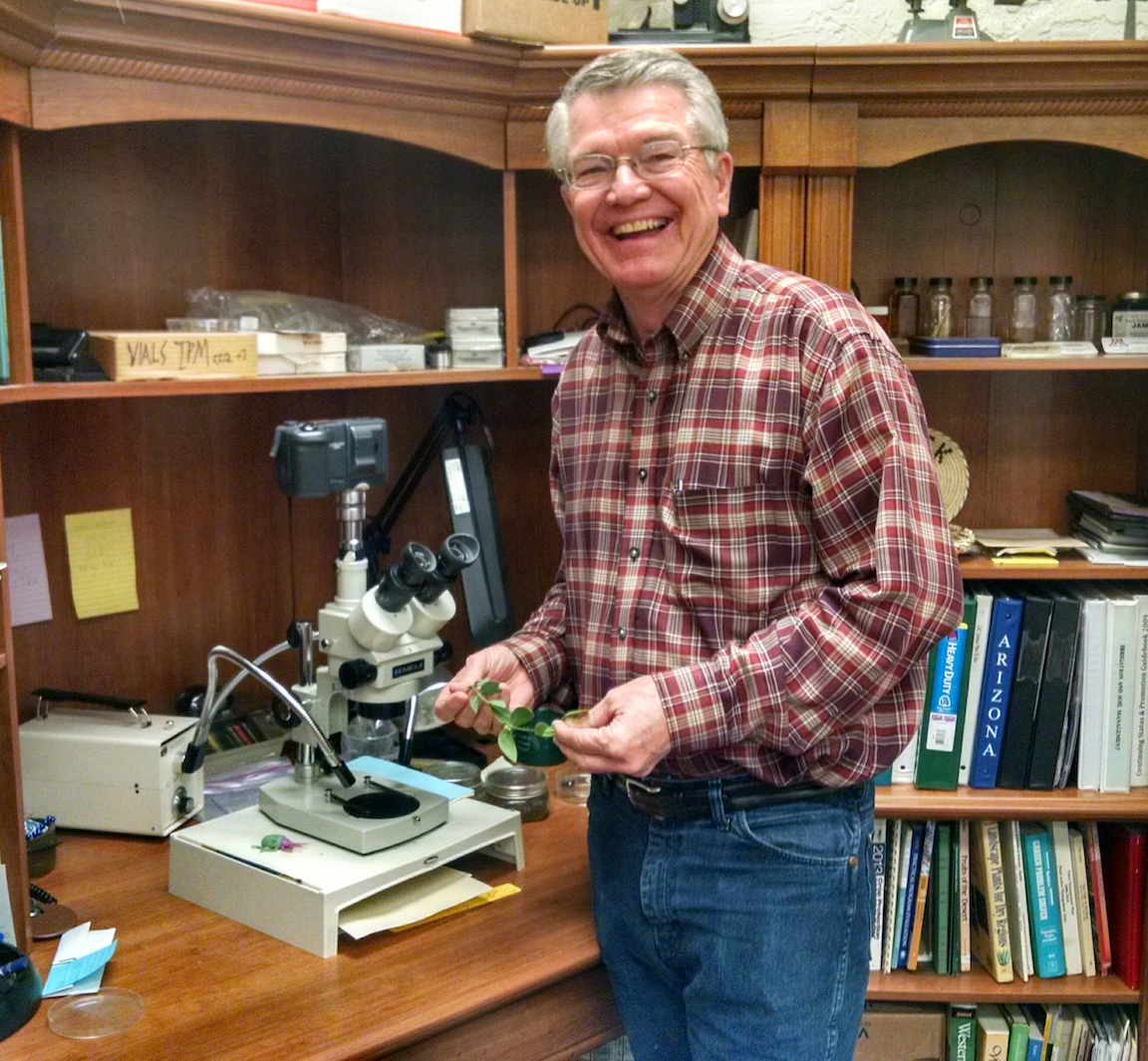 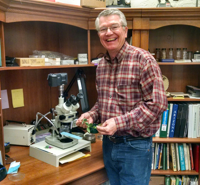 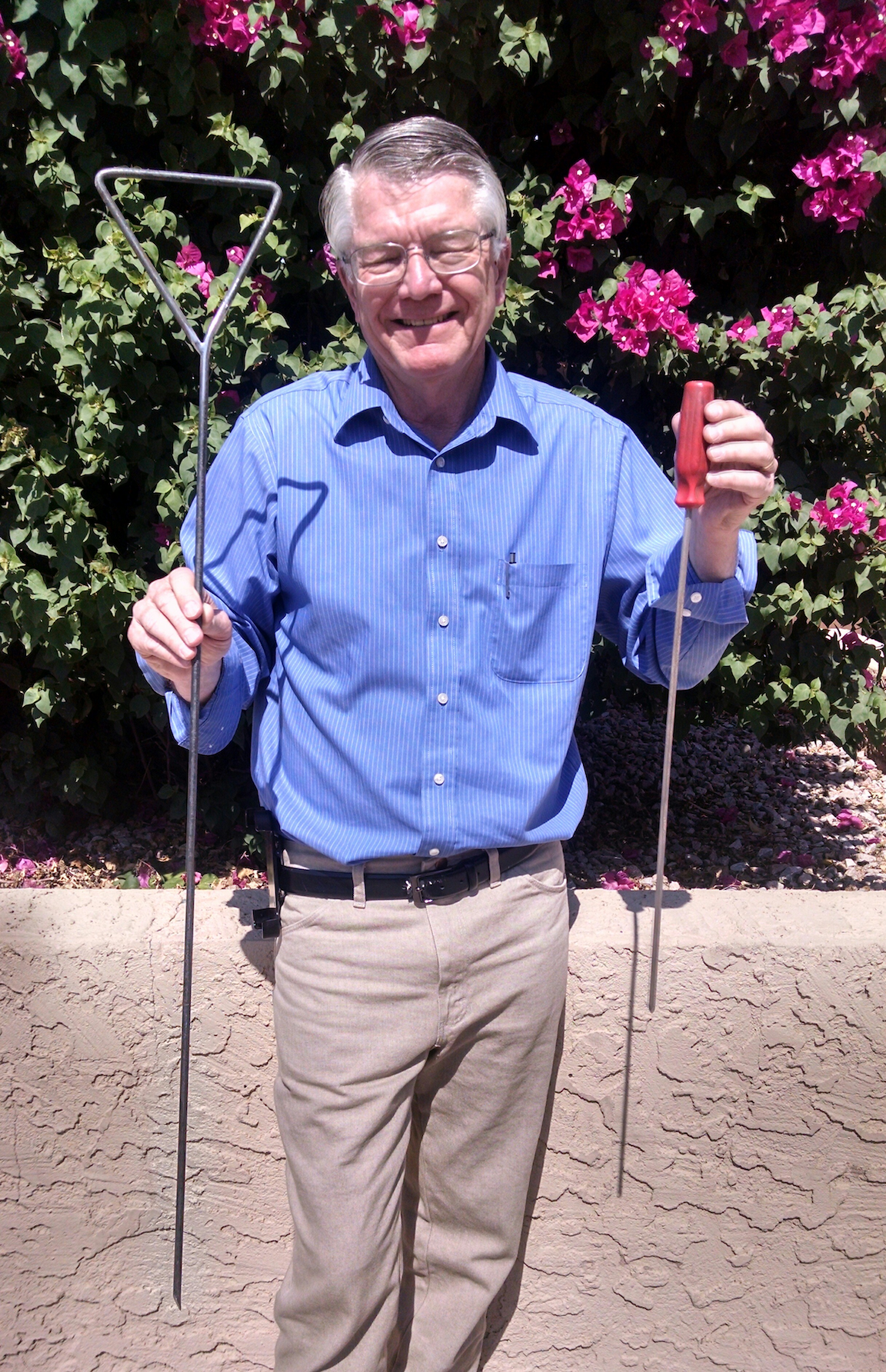 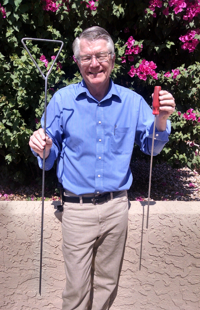 Pinal County Extension Agent Rick Gibson demonstrates the use of soil probes to measure the depth of water penetration into soil after an irrigation.

County Extension Agent Rick Gibson admires an antique Model “E” Gibson tractor on a tour of a Virginia farm while serving on the national board of the National Association of County Agricultural Agents in 2016.

Pinal County Extension Agent Rick Gibson demonstrates the use of soil probes to measure the depth of water penetration into soil after an irrigation.

At the time, he thought he’d be at the job for about a year. On Sunday, he retires after nearly 40 years of service.

“It’s time for me to slip into the sunset,” he said. “It’s been a great experience and I’ve seen lots of changes.”

When he accepted the job, Gibson, who later became the Pinal County Cooperative Extension office director, had a goal of helping gardens grow by educating area residents about the Sonoran Desert and its plants.

Through his various efforts, he said he believes he achieved that goal.

As the county extension agent, Gibson visited countless backyard gardens, helping people solve their landscaping problems. He’s spent time on area farms giving advice to growers and has educated the community about how native and non-native plants and trees impact the local landscape.

And he’s trained an army of Master Gardeners to continue his work helping people better understand gardening in the desert. They are active in Casa Grande, Oracle, Saddlebrooke, San Tan Valley, Maricopa and the Superstitions area, he said.

“The Master Gardeners will take the lead when I leave,” he said.

Through his weekly PinalCentral column, he’s worked for many years to educate people about the various issues surrounding gardening, landscaping, food production and plant care.

“The first column I turned in was hand-written with pencil,” Gibson said. “Since then, I’ve gone to writing them on a computer and emailing them.”

The Agricultural Extension Service was created in Arizona in 1914 to provide a program that would bring education and training to farmers in rural areas. Over the years, the organization has come to include youth development and consumer and family development programs.

When Gibson accepted the position in 1981, the Arizona Groundwater Management Act had been passed a year before and the new extension agent was tasked with working with farmers and teaching them to measure and manage water.

“It was an interesting time,” he said.

He’s noticed shifts in gardening over the past few decades as well.

“I’ve seen a lot of change,” he said. “In this area, we’ve transitioned from yards that require a lot of water to those that use less water and use native plants or plants that thrive in the desert.”

Over the years, he’s fielded hundreds of gardening and landscape questions from area residents.

“Probably the most common question I get is ‘what’s wrong with my tree?’ I’ve spent a lot of time diagnosing trees and plants,” he said.

Gibson spent his childhood in Florence. He served three years as a field medic in the U.S. Army.

“I enjoy science and teaching and translating science so that people can use it,” he said.

Gibson, who also holds a bachelor’s degree in biology as well as his master’s, was inducted into the Hall of Fame of the National Association of County Agricultural Agents in 2017.

For many years, Gibson has served on the Central Arizona College board but plans to leave it after his current term.

He plans to remain in the Casa Grande area after retiring. His wife, Lexia, a longtime teacher at Casa Grande Union High School, is also retiring.

Gibson: Final thoughts after 39 years as a county ag agent

This coming Friday I retire from my position as a Pinal County Cooperative Extension agent.