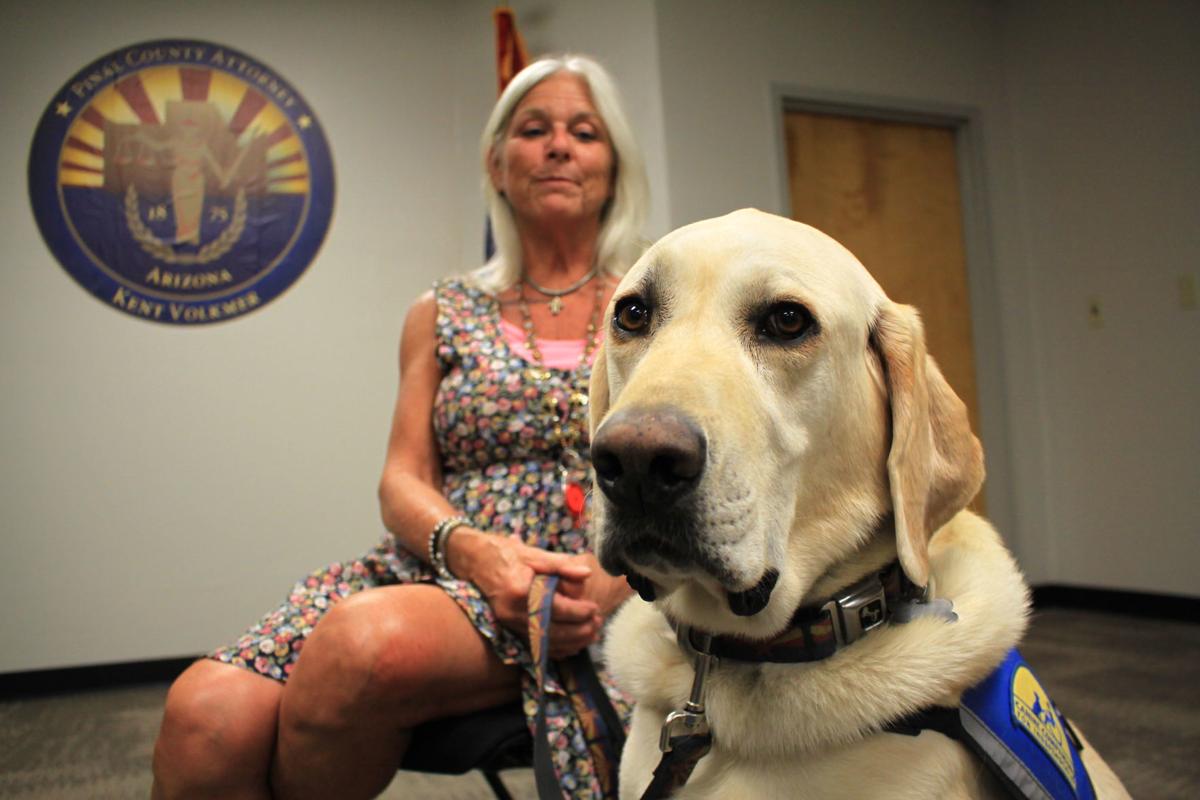 Victim advocate Debbie Boyle sits with her dog Pilot, who is a trained emotional support dog. Pilot is a 5-year-old golden/Labrador retriever mix who has been professionally trained to be a courtroom service dog working for the Pinal County Attorney’s Office. 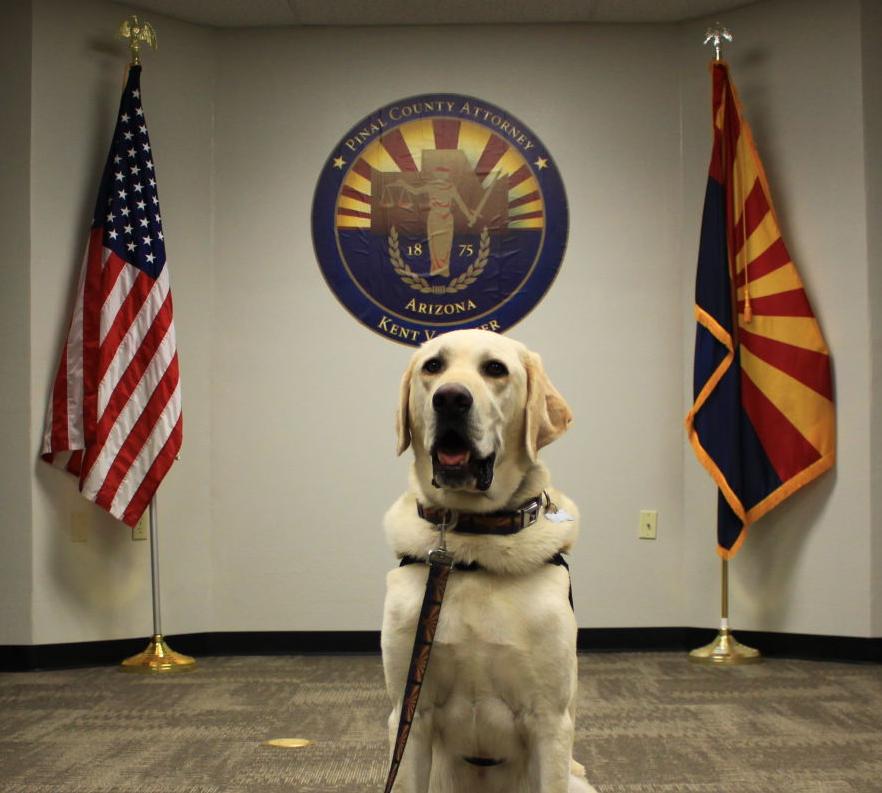 Pilot is a 5-year-old golden/Labrador retriever mix who has been professionally trained to be a courtroom service dog working for the Pinal County Attorney's Office. 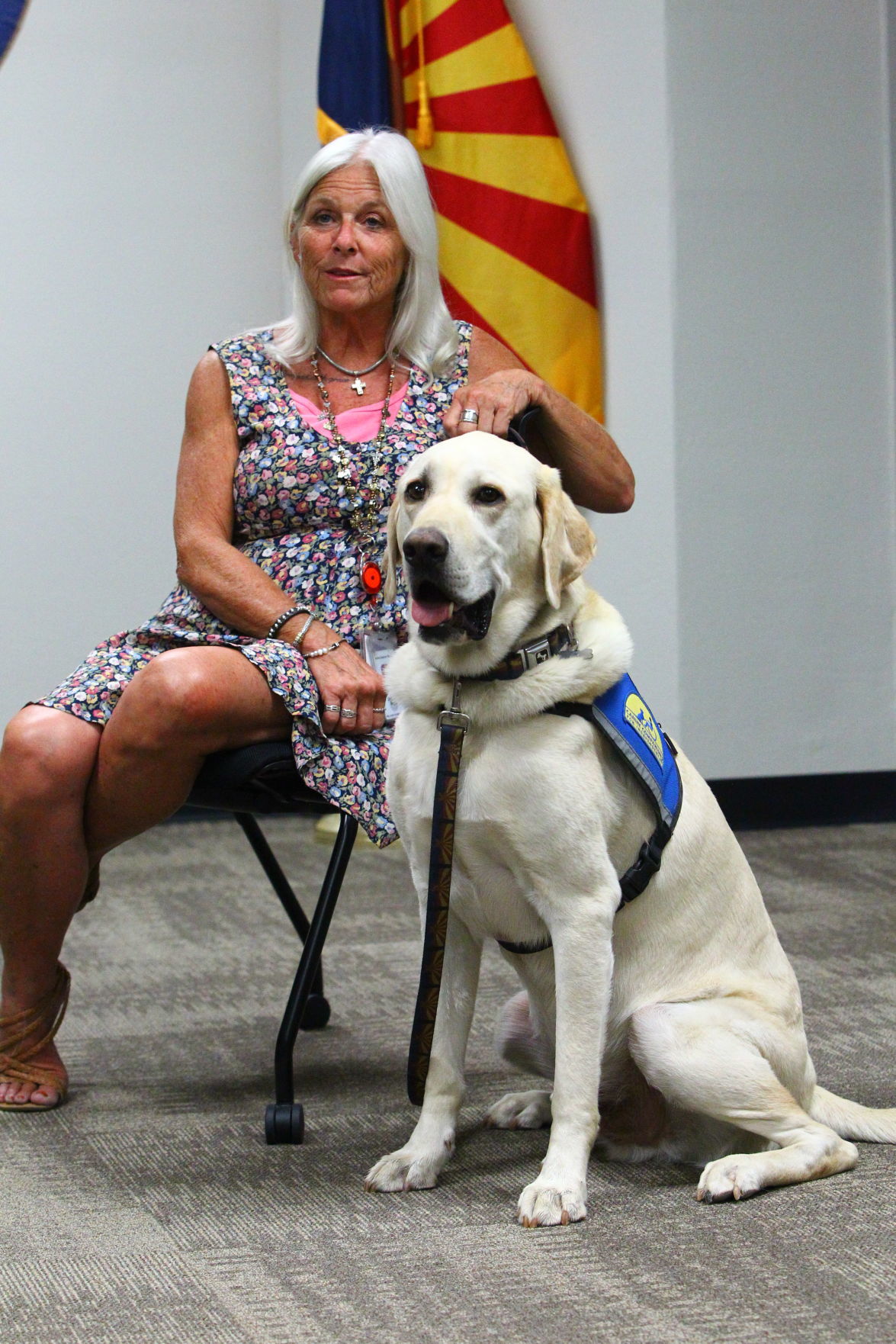 Victim advocate Debbie Boyle sits with her dog Pilot, who is a trained emotional support dog. Pilot is a 5-year-old golden/Labrador retriever mix who has been professionally trained to be a courtroom service dog working for the Pinal County Attorney’s Office.

Pilot is a 5-year-old golden/Labrador retriever mix who has been professionally trained to be a courtroom service dog working for the Pinal County Attorney's Office.

FLORENCE -- There has never been a better judge of the human soul.

Pinal County has an incredible team to take care of the victims of crime, especially when they are young.

Debbie Boyle is a victim advocate for the Pinal County Attorney’s Office but she has a very special tool — his name is Pilot.

Pilot is an extremely smart and gentle 5-year-old golden retriever/Labrador retriever mix who has been professionally trained to be a courtroom service dog.

Pilot helps those who are victims of crimes emotionally get through their worst times. He works with sexual assault victims, victims of domestic violence and even comforts those who are left behind when one of their family members is murdered.

Pilot knows exactly what is happening in and out of the courtroom and he understands that sometimes people just need a hug or a friendly face that creates a smile.

There is just no one quite like Pilot, and he is an expert with people.

As an advocate, Boyle is a liaison between a crime victim and Pinal County Superior Court. She works with prosecutors and makes sure that victims are well informed about all of the hearings involved in their case.

“With Pilot, we have a whole spectrum of other things that we do,” she said. “We also go to the Family Advocacy Centers and he sits in on forensic interviews with kids and other victims of a crime. If they become actual cases, Pilot can start with the court orientation process with kids. That covers a whole spectrum of ages. It gets them used to being in court,” Boyle said.

Pilot often sits with crime victims in a victim services room or in court. He sometimes comforts a victim in the witness box when they testify in a case. He can be with a victim through all aspects of a case to ease their anxiety.

“It really makes a huge difference, not only with the kids but with adults, because it is very calming to have him there. It distracts them. He just has a huge calming effect on everybody that he works with,” Boyle said.

Pilot is a fully certified service animal and is credentialed as a “service dog” but he is also a “facility dog,” which allows him to go into court where regular therapy dogs are not allowed to go.

He was born in Santa Rosa, California, and went to a “puppy-raiser” in Utah until he was about 15 months old. He then attended college in Oceanside, California.

“He graduated with a degree,” Boyle said. “They don’t graduate until they go through team training. A lot of dogs don’t make it. There is a lot of criteria that he had to meet before he graduated. He had to be certified by Assistance Dogs International. He had to pass all the tests in team training successfully. If he doesn’t pass — he doesn’t graduate.”

Boyle said Pilot was tested in public while being trained in a car and was even tempted with food without taking any of it.

Pilot’s education started at 9 weeks old and continued until he was matched with an applicant at the age of 2, which was Boyle.

At just 5 years of age, Pilot seems to be a lot more mature.

“He looks old. He is an old soul and he’s a pretty wise guy,” she said.

Boyle and Pilot have been working with victims in Pinal County for the past year-and-a-half. They previously worked together in Douglas County, Colorado.

“We’ve been together since he graduated,” she said, which was three years ago.

“He’s more than a pet. When he goes home and takes off his vest, he’s just a dog. He likes to play and he sleeps. We have another dog and animals at home. He is well matched with all of them. He swims and plays out in the yard. He has a pretty good life but he has a few more talents than the other dog,” Boyle said.

“He is a member of the courthouse dogs foundation. They (the foundation) help the courts understand the use of courthouse dogs and they write legislation for the dogs to work in courts. They also do a lot of training,” Boyle said.

Pinal County has passed legislation that allows Pilot and other certified courthouse dogs access to victims in the courtroom.

“We actually have a statute that allows him to accompany a child in court and to the witness box, if the child wishes. That’s for any child up to 18 years of age. After 18, then it is up to the judge. The judges here are very open,” she said.

Pilot has been a part of around 200 forensic interviews and attended court hearings in at least 250 cases, according to Boyle.

Many of these cases are among the most heart-wrenching imaginable.

Boyle said Pilot sat next to the little girl as she held his leash throughout the entire hearing.

“It made a huge difference,” Boyle said.

Pilot is friendly with most everyone but it is still his choice. He has the ability not to engage with someone that he may not like, Boyle said.

“When it is a child or a victim, he seems to kind of hone in on that anxiety. He seems to sense it. When we’re working — he is working. He knows it and we try not to be social. I want him to stay with the person he is there to work with. He knows that. When we are done, he can socialize with other people,” Boyle said.

In many ways Pilot is a living pressure release valve.

“If they have him (beside them) — it’s not so bad. We can get through this. That is what make it worth it,” said Boyle.

She said that Pilot is still fairly young and she’s going to continue working with him for many years.

“He can work eight to 10 years. I will work with him as long as he is able to. Until he has to be retired, which they will do at an age limit or if he were to be injured or get sick. We will work as long as Pinal County will have us. He wants to be here,” she said.

Boyle is a full-time paid victim advocate for the County Attorney’s Office. The office also pays for many of Pilot’s needs like food and veterinary bills. Canine Companions for Independence covered the cost of his training as a special dog. It was very expensive to raise and train him.

“They give him to you to work with. If they match him with you, the only thing they require is that you maintain his health, his wellbeing and his medical needs. They just want you to take really good care of him and do what he is trained to do,” she said.

Canine Companions can repossess an animal if the owner is not properly taking care of it. He also has to be certified every three years after passing the first two years. Pilot is scheduled to be recertified in 2020.

Canine Companions is an important support system for both Boyle and Pilot with monthly regional meetings as well as a national office in California that is always available.

“He teaches me. In college, he knew what he was doing and I think he trained me. I had to learn how to give the commands and what to do with the leash. He already knew it and he had to teach me,” she said.

Another courtroom trained service dog will be coming to Pinal County soon. His name is Kirby and he will be headquartered at the Family Advocacy Center in San Tan Valley. Kirby is a hypoallergenic Labradoodle.

Pilot will be working at the Pinal County Courthouse all of the time when Kirby begins his new career.

“I have always felt honored to have Pilot because of what he can do and how smart he is. The people who trained him — it is an absolute science when they work with these dogs. They don’t all graduate. They are such special dogs,” she said.

Boyle said that Pilot is the largest dog that has ever graduated the Canine Companions program.

“He is a big boy and the puppies love him. They climb all over him and he is just so gentle. He is a big gentle giant,” she said.