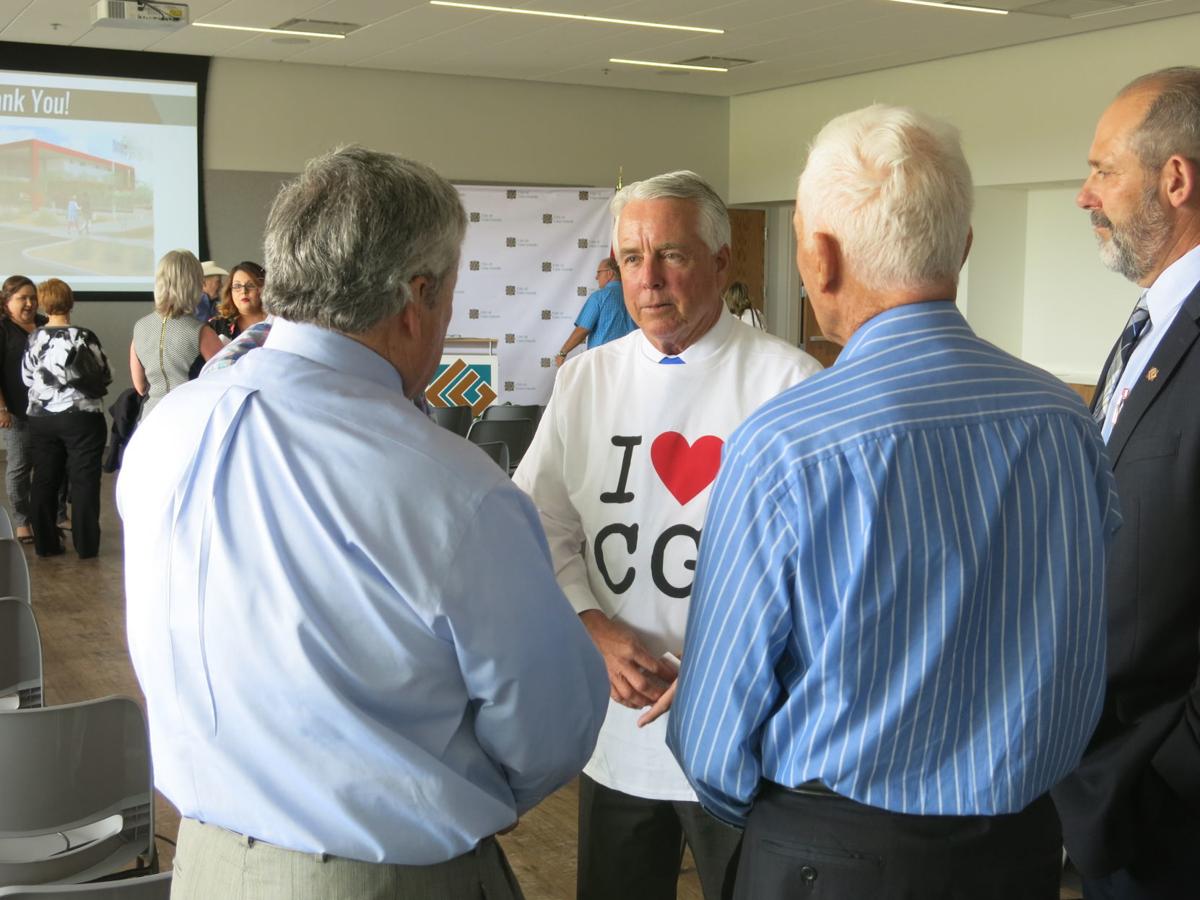 Mayor Craig McFarland speaks with attendees of his annual State of the City presentation Thursday at the new recreation center. 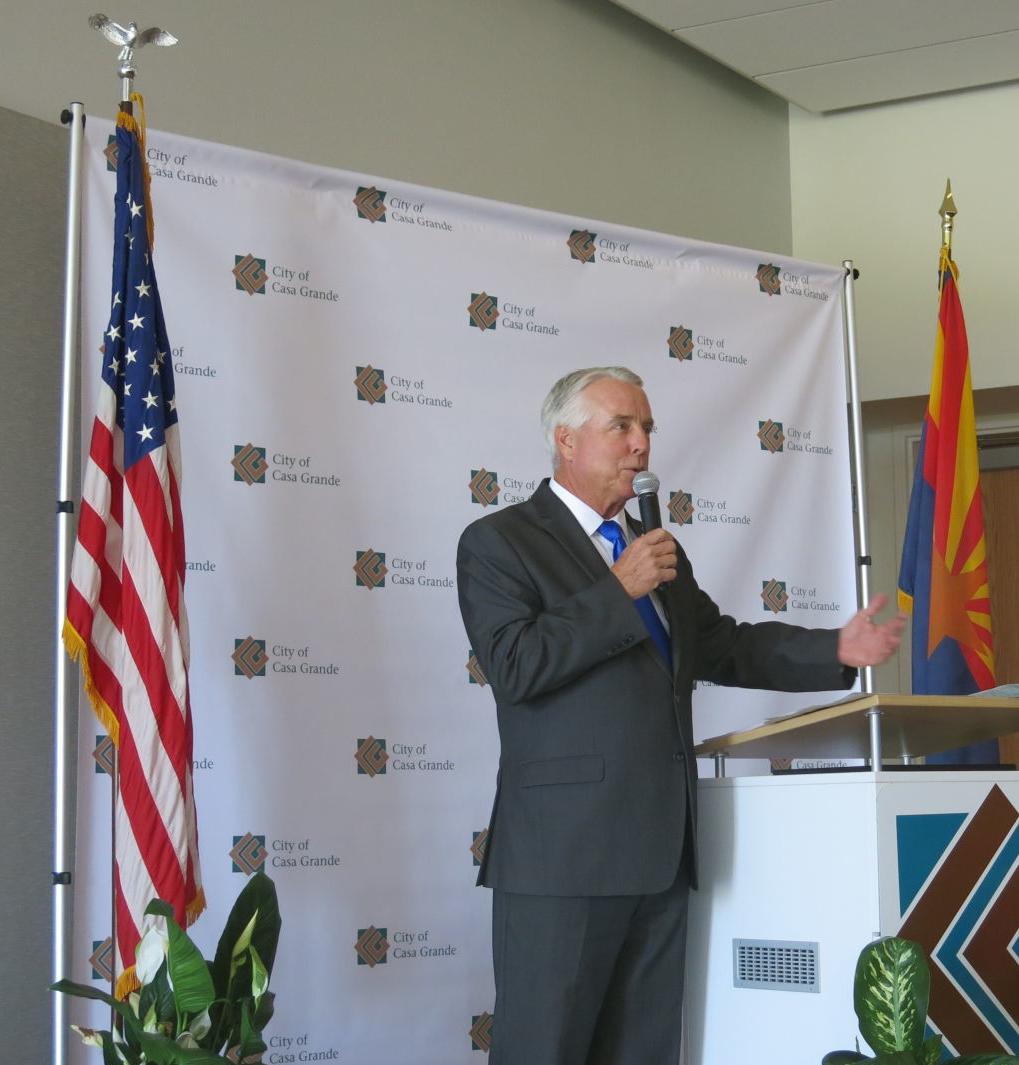 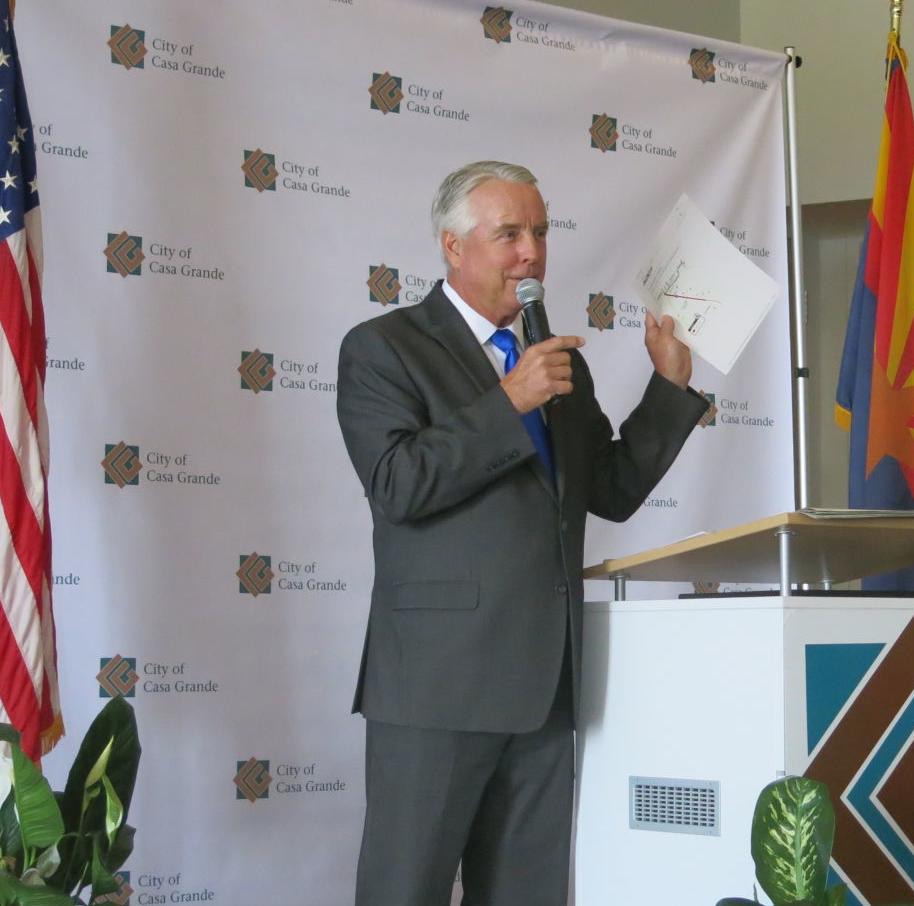 Mayor Craig McFarland speaks with attendees of his annual State of the City presentation Thursday at the new recreation center.

CASA GRANDE — Despite some major economic development projects being “on hold” for now, Casa Grande Mayor Craig McFarland said he thinks the city is “poised to grow rapidly” Thursday.

In his annual State of the City address, the mayor told a room full of residents at the city’s new Community Recreation Center why he thinks Casa Grande is great.

So much so that he donned an “I Heart CG” T-shirt at the end of the presentation and threw out similar shirts to the audience.

“We are really the talk of Arizona,” the mayor told the crowd. “It’s amazing how many people know where we are today.”

Lucid Motors and Nikola Motor Company are going to make Pinal County the global center of electric-car manufacturing, the mayor predicted, after the projects break ground in the near future.

But other large-scale projects like PhoenixMart and Dreamport Villages are on hold, the mayor said he’s been told, as developers work to secure financing. PhoenixMart started construction on the east side of Casa Grande a few years ago, but progress has been idle lately.

Dreamport Villages is a proposed amusement park south of Casa Grande that was first made public two years ago. The mayor said the project is “still alive.”

Water is another factor that may interfere with these economic projects, the mayor said, and officials are working with the state Department of Water Resources to address some of its rule challenges.

“We really need to fix this situation,” McFarland said.

Education is one of the mayor’s top priorities entering his second term as he attempts to strengthen workforce development in the region. McFarland said he’s talking with Arizona State University and the University of Arizona to implement a science and technology center in Casa Grande.

Infrastructure remains another pet project for the mayor. He’s long been a vocal advocate for widening a portion of Interstate 10 between Casa Grande and Phoenix.

He reminded the crowd on Thursday how local stakeholders have officially begun the planning process of widening the freeway, but funding the project will be another challenge.

“I’ll take collections if anybody wants to give any money,” he joked.

In the months to come, McFarland said the City Council will explore the possibility of privatizing some of the city’s public services and improving internet access for residents.

And marketing will continue to be at the forefront of the city’s agenda, as McFarland hopes to install billboards along I-10 near the city of Surprise that will remind motorists how they could have been home sooner if they had chosen to live in Casa Grande.

“I don’t think Surprise is gonna like that, but that’s their problem,” he said.

CASA GRANDE — City leaders heard a presentation Monday on a plan that if implemented could improve travel time on Florence Boulevard by 25 percent.