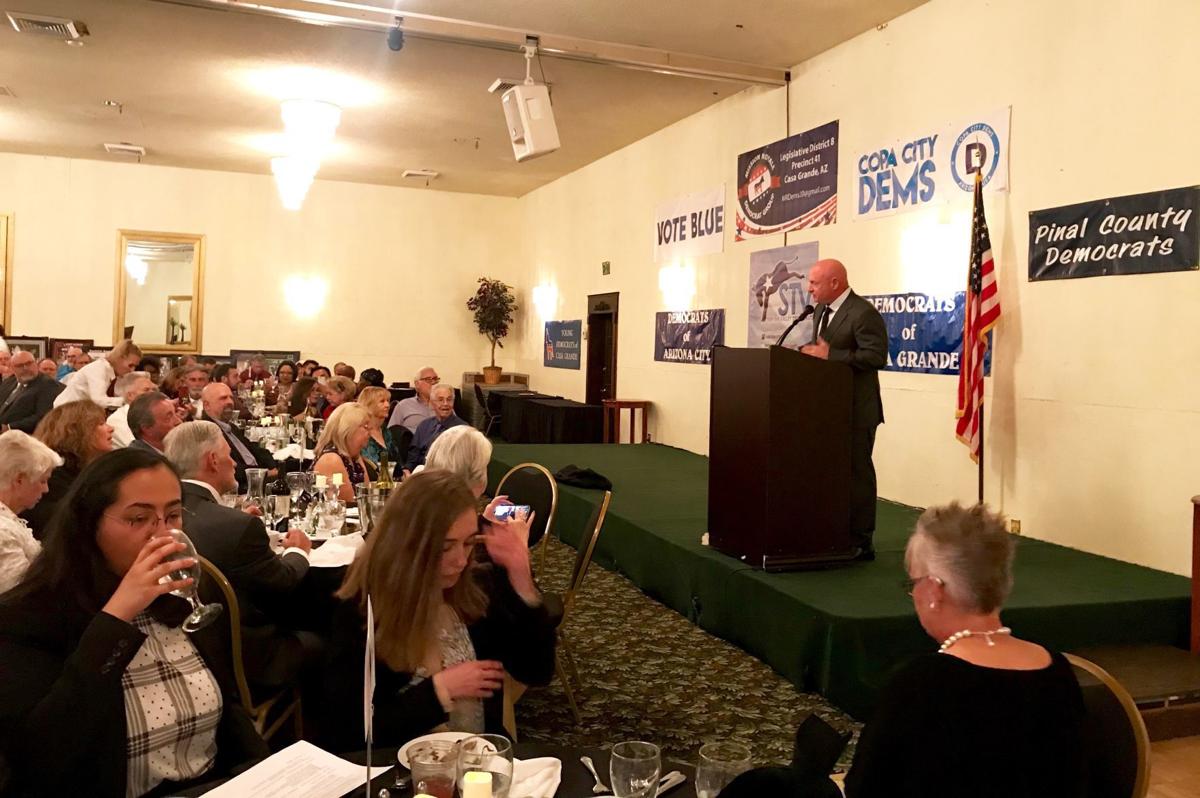 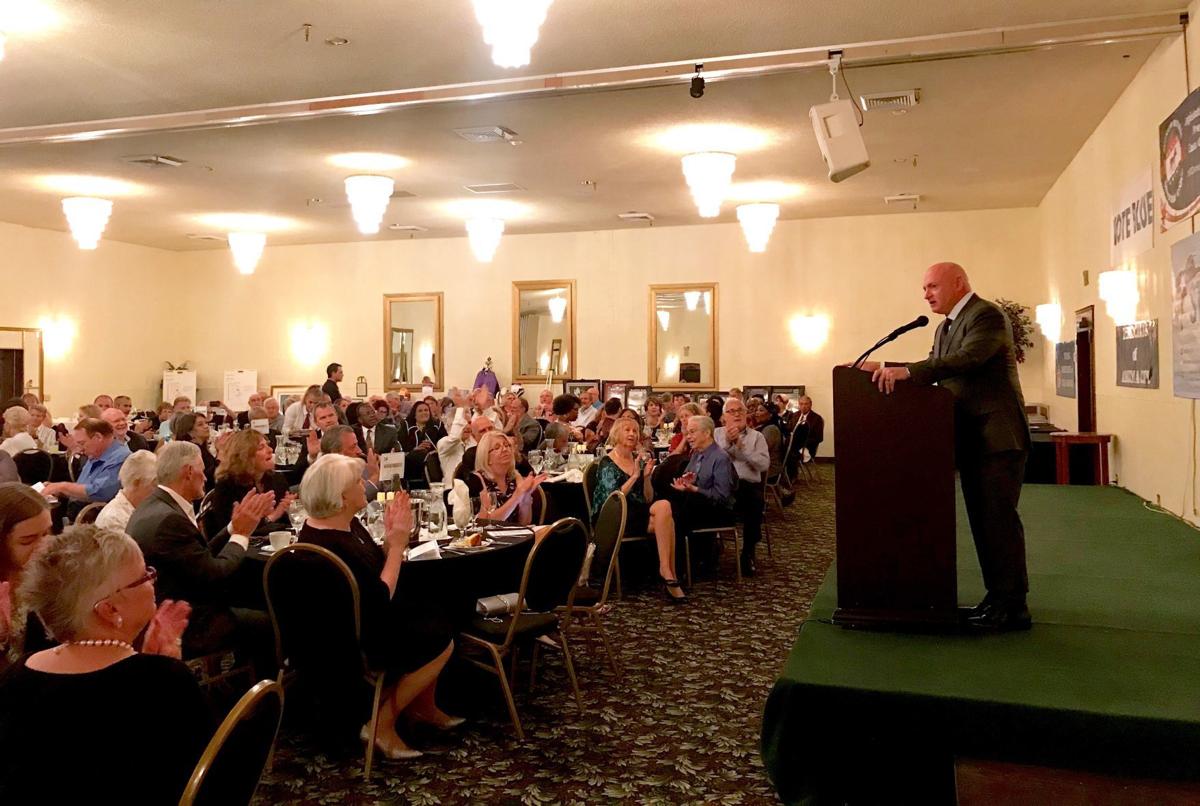 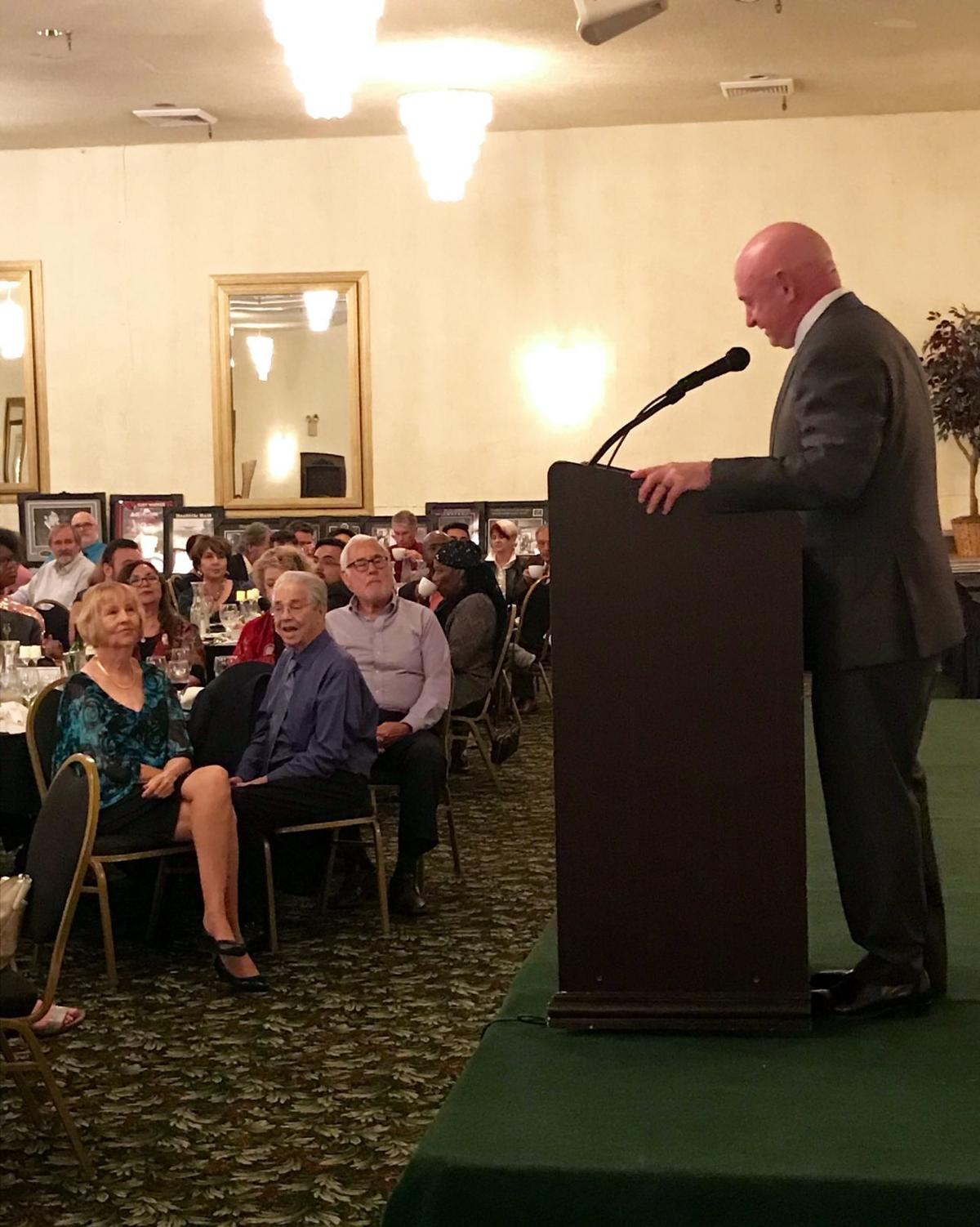 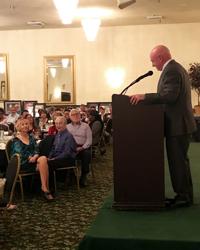 CASA GRANDE — U.S. Senate hopeful Mark Kelly got a standing ovation before and after his speech at the Pinal County Democratic Party’s annual gala Saturday evening at The Property Conference Center in Casa Grande.

Kelly, who is running for the seat held by Republican Martha McSally, pledged to lower prescription drug prices, protect Social Security and Medicare, work for affordable health care coverage for all, address climate change and push for gun safety rules.

“Washington isn’t even trying to solve some of these big problems,” he said. “We have a system that is broken, because politicians in Washington, D.C. are more focused on politics than they are on getting things done for the American people.

“Don’t let anyone tell you we can’t solve these problems. We can and we have to.”

Kelly also drew some chuckles from the packed room as he described his skills as a beginning pilot in the Navy and as a NASA astronaut. His experiences in both organizations taught him how to work with people from other races and cultures with different political systems, beliefs and languages.

“Because when you’re orbiting the planet at 25 times the speed of sound and bad stuff starts to happen, it does not matter the politics or the background of the person you’re trying to solve this problem with. Leadership is finding a way forward together,” he said.

Kelly also described seeing the Earth from orbit for the first time and realizing that “we’ve got no place else to go. We need to do a better job taking care of this planet.”

He talked about how his mother and his wife, former Rep. Gabby Giffords, taught him perseverance. His petite mother, who worked two jobs — as a waitress and a secretary — taught him determination when she decided to become the first female police officer in his hometown in New Jersey. He recalled her repeatedly trying to climb the more than 7-foot-tall wall his father, who was a police officer, built in their backyard in order to practice for the physical test she would have to take to become an officer.

It took her several days before she could first climb to the top and then get herself over the wall, he said. But she did it and she passed the test, climbing over the wall at the test site faster then most of the men she was competing against.

Kelly said his wife also taught him tenacity as she recovered from a devastating head wound after she and several other people were shot during a meet-and-greet event in Tucson in 2011.

“I still think how much more difficult that fight would have been if Gabby did not have good health care coverage,” he said. “Every family deserves coverage that they can rely on when they need it the most.”

He pledged to expand health care access and reduce costs for families by allowing people nearing retirement to buy into Medicare and allowing a public health care option in areas where there isn’t enough competition.

He also declared that he would not “take a dime of corporate PAC (political action committee) money.”

He asked that people support him in any way they can, through donations or by volunteering their time. It will take a lot of work to take back the Senate and turn the state blue for the Democratic Party, Kelly said.

Kelly has outraised McSally for the third straight quarter.

Kelly’s campaign said Monday he raised $5.5 million between July and September and had about $9.5 million in the bank at the end of the reporting period.

That brings his total fundraising for the race to nearly $14 million, a massive haul for a first-time candidate that will help the retired astronaut introduce himself to voters.

McSally’s campaign says she raised more than $3 million during the period and had $5.6 million in the bank. She’s raised about $11 million in total for the campaign so far.

Neither candidate released data on spending.

Katie Hobbs, the Arizona secretary of state, also spoke at the gala. She described how much work she has had to put into the office to reverse what she called some of the damage that was caused by previous secretaries of state.

Hobbs pledged to protect the right of all citizens to vote in the state.

Rep. Tom O’Halleran’s office had two tables full of supporters at the gala. O’Halleran’s schedule did not allow him to attend the event but one of his challengers for the Democratic nomination for Arizona’s District 1 U.S. House of Representatives seat, Eva Putzova, was canvassing the event.

Putzova, who is from Flagstaff, is one of three Democrats challenging O’Halleran for the seat. Barbara McGuire from Kearny and Larry Williams from Chambers in Apache County are the other two.

There are also two Republican candidates vying for the District 1 nomination in 2020, Tiffany Shedd from Eloy and Chris Taylor from Safford.

The event ended on a light note with Maricopa comedian Tony Vicich poking fun at current events, a 50-50 raffle and silent auction.