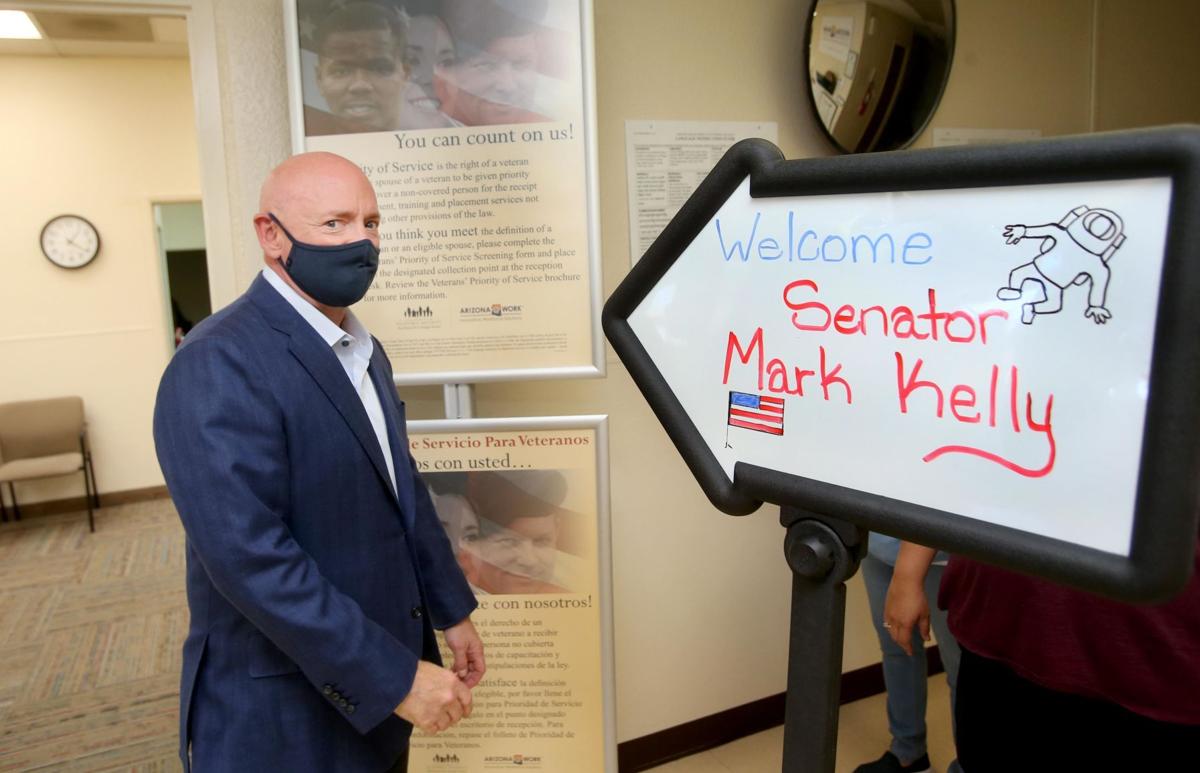 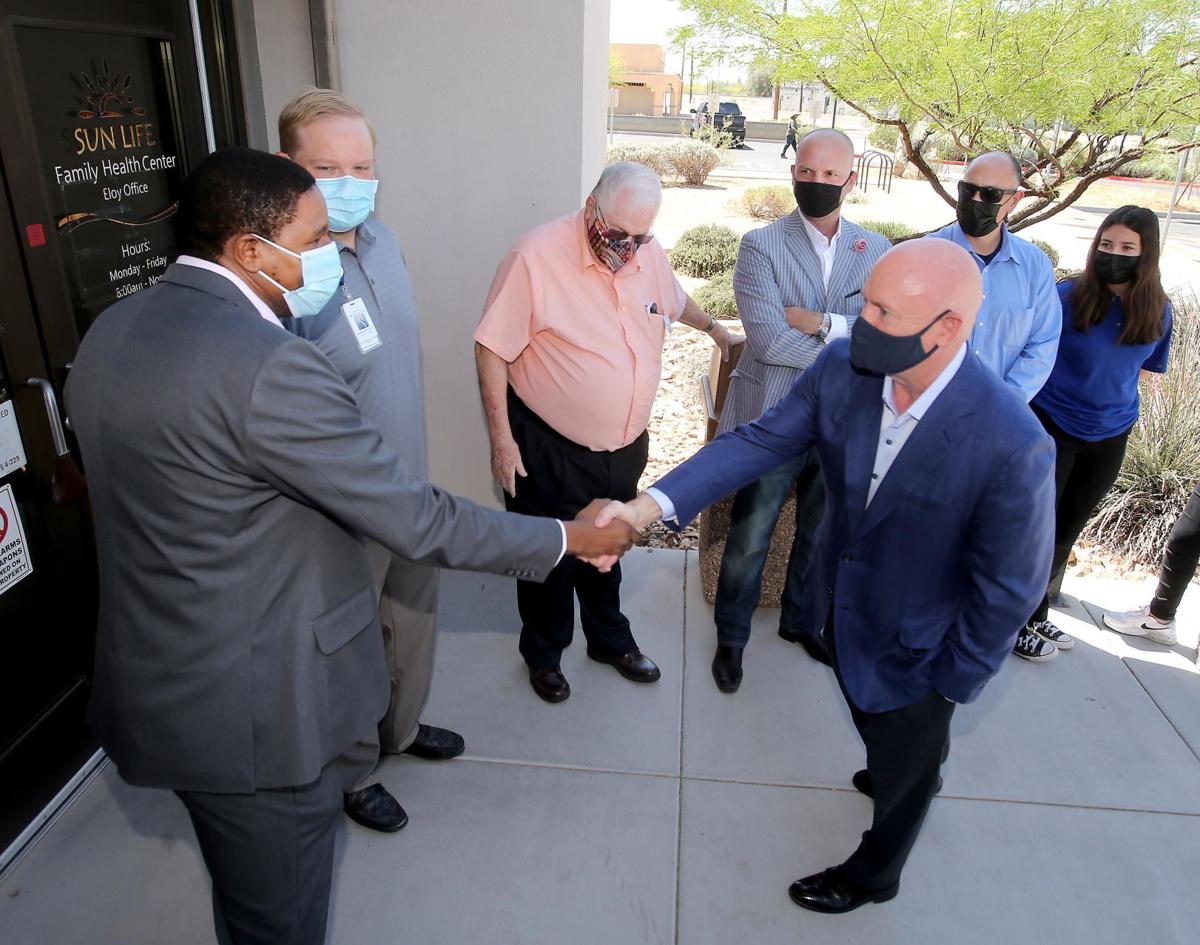 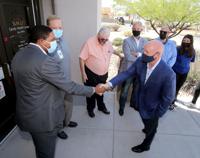 CASA GRANDE — U.S. Sen. Mark Kelly visited Eloy and Casa Grande this week in an effort to catch up on the health care and economic needs of both communities.

Kelly has been making rounds of various communities in the state. On Monday he visited the U.S. Border Patrol’s Tucson Sector, where he got a briefing on operations and a tour of the facility. He visited the southern border in Yuma and its sector office about a month ago.

Kelly said Tuesday that security at the border is a significant problem and he wants to make sure that all sectors are getting the support and resources they need.

“The federal government has screwed this up for decades,” he said.

Kelly also addressed news that Jim Lamon, a solar energy entrepreneur and a Republican, has formally announced his intention to run against him in the next election.

“It’s about 18 months until the next election. I’m focused on what’s needed to get Arizona through this pandemic and its economic crisis,” Kelly said.

Kelly is finishing the six-year term that was vacated when Sen. John McCain died. Gov. Doug Ducey appointed former Sen. Jon Kyl temporarily and then Sen. Martha McSally to the position until the next election, which was in 2020. Kelly unseated McSally in November.

Kelly’s first stop Tuesday was at the Sun Life Family Health Center in Eloy, where he received a tour of the facilities and asked how staff were working to provide health care to rural residents and handle the COVID-19 pandemic at the same time.

Kelly was assured by Sun Life executives that the health care provider was getting all the vaccine supplies it needed.

He asked about what staff have done to accommodate patients during the pandemic, especially in rural areas.

The organization never really closed its doors and has been using telemedicine to reach more patients during the pandemic, said Sun Life Patient Engagement and Community Relations Manager Samantha Reinhard.

Sun Life nurse practitioner Bessie Burk stated during the tour that the organization had given approximately 25,000 vaccinations in the Pinal County area. The health care organization has been using its mobile unit to help provide vaccine locations to some of the more remote areas and is looking at using the unit to provide vaccines to homebound patients soon, she said.

Kelly asked what the organization needed to provide more services to local and rural communities.

One concern is that the Centers for Medicare & Medicaid Services may end or reduce funding for telemedicine services once the pandemic ends, Reinhard said.

More funding and the expansion of rural broadband internet services would also be helpful so that more patients in the county’s most rural areas could gain access to telemedicine, Reinhard said.

Kelly said that there is broad support in Congress to expand rural broadband internet services and he felt “pretty good” that a bill supporting it would pass, but he was unsure how much funding the project might receive.

Burk also asked the senator to look into a flaw in the process to get diabetic shoes approved for patients. She explained that the shoes help prevent sores on the feet of people who have diabetes. The shoes have to be prescribed by a medical doctor, they cannot be prescribed by a nurse practitioner like herself.

Burk said that health care organizations are working to get a bill into the Senate that would allow a nurse practitioner or other medical provider to prescribe the shoes instead of having to go through a medical doctor. 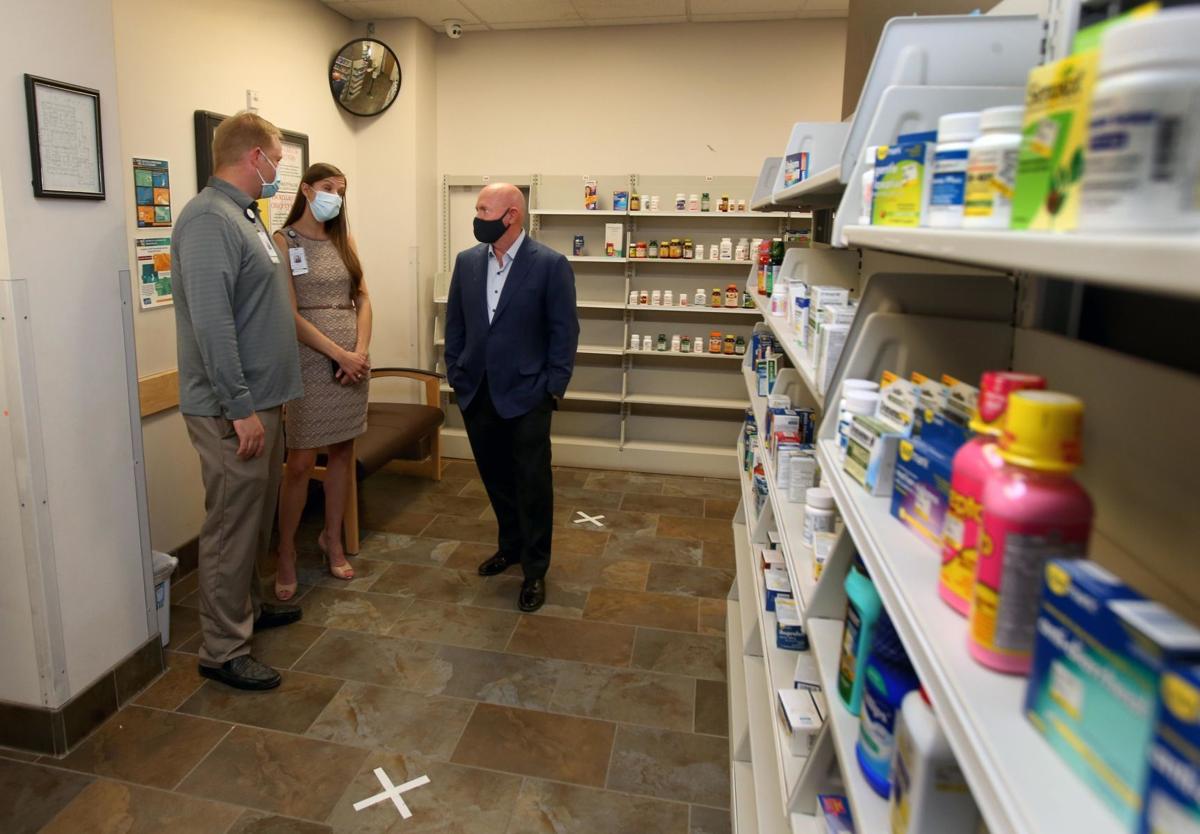 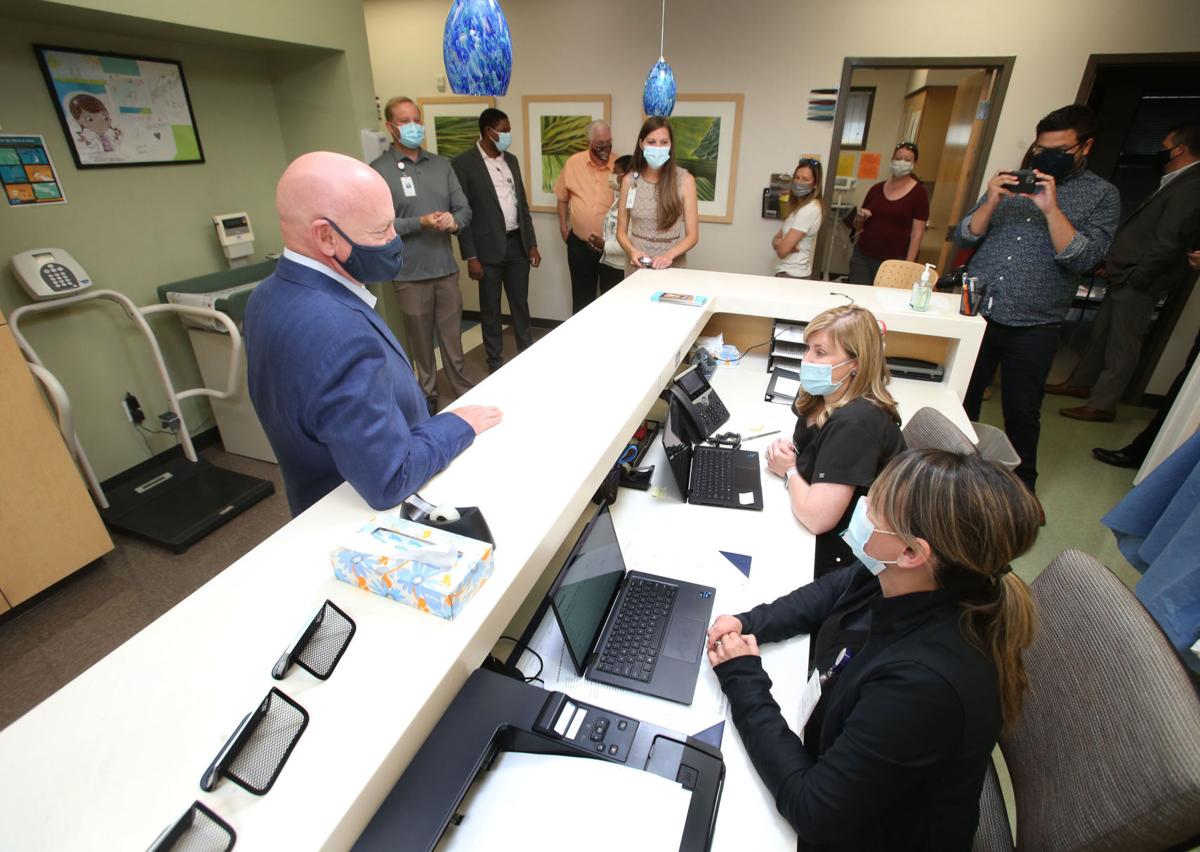 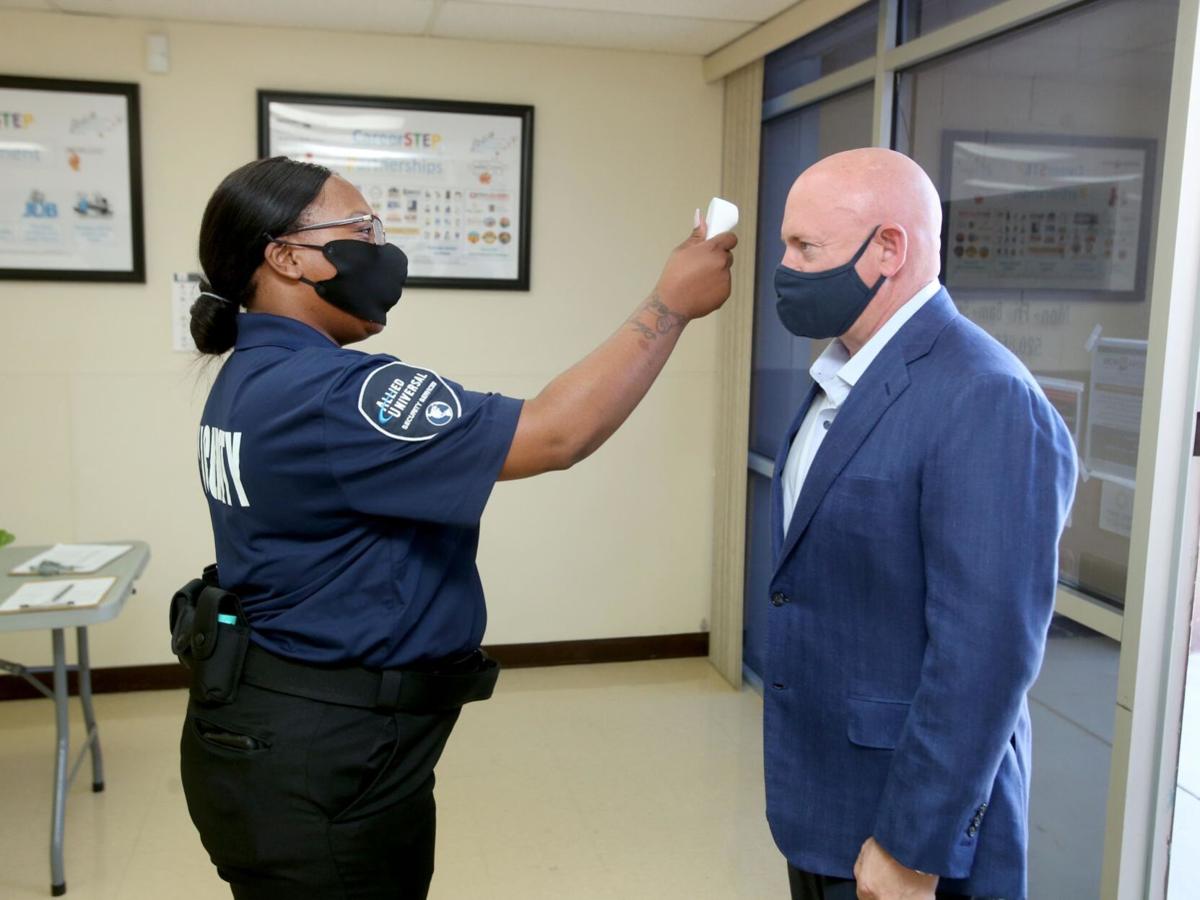 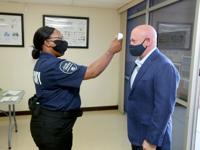 Sen. Mark Kelly, right, has his temperature taken during his visit to Arizona@Work Tuesday May 4, 2021 located at 318 N. Florence St. 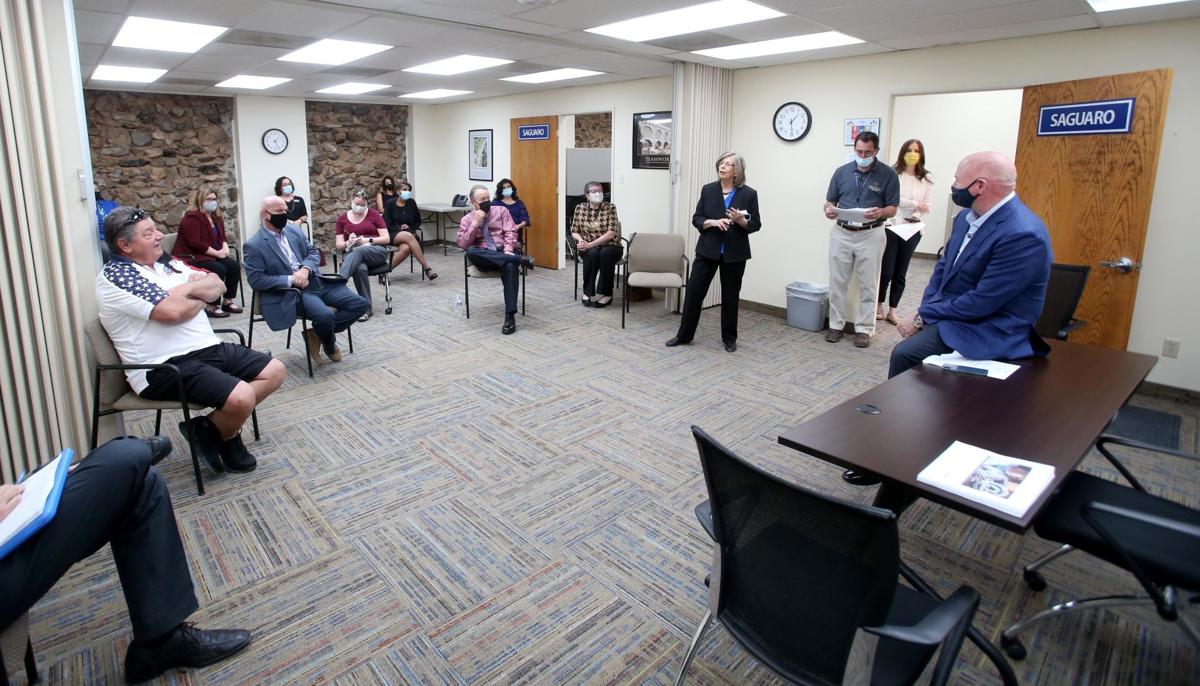 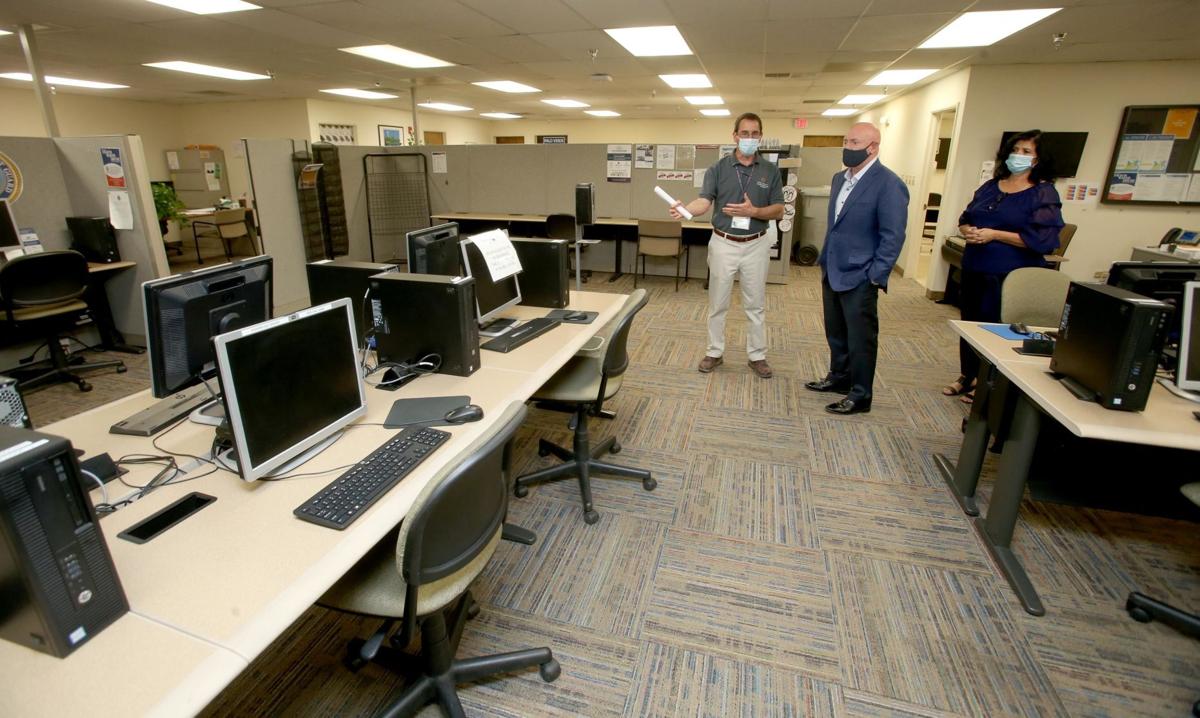 Senator Mark Kelly, center, takes a tour during his visit to Arizona@Work Tuesday May 4, 2021 located at 318 N Florence St. 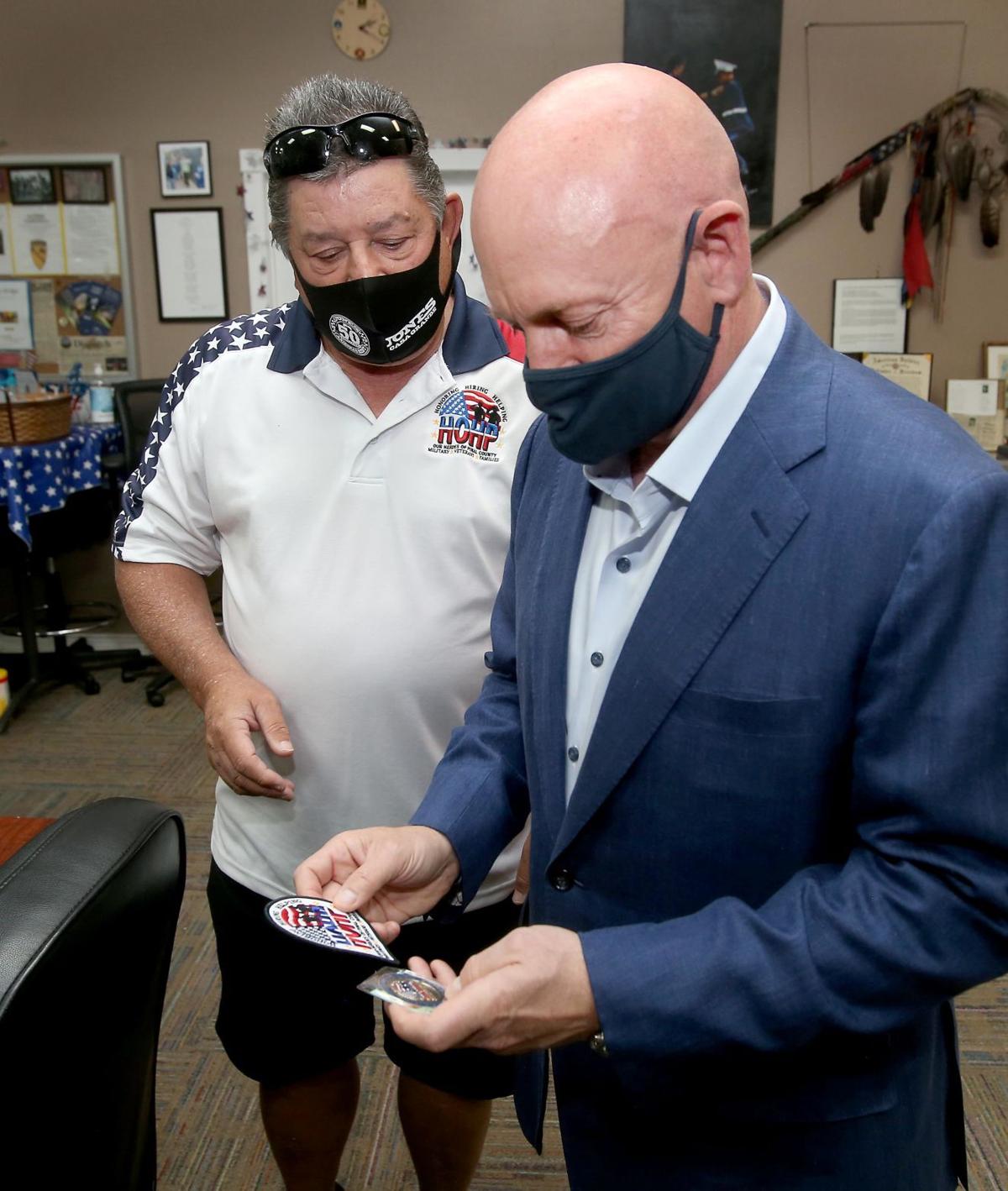 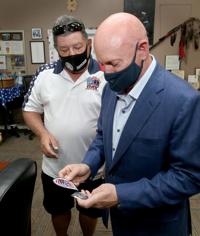 Udo Cook, left, presents Senator Mark Kelly with a patch and coin during his visit to Honoring/Hiring/Helping Our Heroes of Pinal County office Tuesday May 4, 2021 located on Florence St.

Sen. Mark Kelly, right, has his temperature taken during his visit to Arizona@Work Tuesday May 4, 2021 located at 318 N. Florence St.

Senator Mark Kelly, center, takes a tour during his visit to Arizona@Work Tuesday May 4, 2021 located at 318 N Florence St.

Udo Cook, left, presents Senator Mark Kelly with a patch and coin during his visit to Honoring/Hiring/Helping Our Heroes of Pinal County office Tuesday May 4, 2021 located on Florence St.

Kelly said he also hopes that the country will be able to get some good things, like greater access to telemedicine, that will improve the lives of residents out of the crisis.

“There’s a lot that can be done to make sure the economy comes out better,” he said.

He acknowledged that getting people to sign up for the vaccine may be difficult but if officials can tout some of the benefits to being vaccinated, like a more open economy and more freedom to do things that people enjoy, it may encourage people, he said.

Kelly also toured the Arizona@Work workforce development agency in Casa Grande, where he peppered board members and employees with questions about how the program works, what services it offers, how many employers it works with, how successful it is and how the pandemic has changed things.

Board Chair Liz Harris-Tuck from Career Horizons explained the organization has learned a number of things during the pandemic. The Casa Grande office was closed during the pandemic due to COVID-19 concerns but was able to provide teleconferencing aid to career seekers and the unemployed and reach those in the most rural sections of the county.

She had a number of directors explain the various programs that the organization offers such as youth and veteran employment services, job seeker resources, skills and career training through various local partners such as Central Arizona College.

Tim Tucker from the Arizona Department of Economic Security said the pandemic has impacted the demand for services from the organization. There are a lot of employers who need employees but are having a hard time finding people to hire.

There are a number of reasons why people are not immediately returning to the workplace, Tucker said. Some people are still concerned about the virus, others are looking for help in making a career or job change and some are making more on unemployment than they would if they returned to their old jobs.

Tucker said about 190,000 people in the state are receiving unemployment benefits. About half of those people are gig workers, who worked for platforms like Uber or Lyft. What’s unknown is how many of those workers are going to return to those gig jobs or look for something new.

Tucker said Ducey’s recent order requiring those on unemployment to start showing proof that they are actively looking for work again should help the situation.

The requirement was suspended earlier in the pandemic while businesses were closed due to the governor’s orders. That requirement is supposed to go back into effect on May 23.

One thing that might aid in the economic recovery and growth of the area would be to widen Interstate 10, said Udo Cook, co-chair of Honoring/Hiring/Helping Our Heroes of Pinal County. The organization partners with Arizona@Work to provide services, including employment services, to local veterans. Widening the freeway would reduce the number of accidents that close the freeway, which is a major commuter route between Phoenix and Tucson.

Kelly agreed and said he thought the creation of Interstate 11, which would run from Noglas, Arizona, north through the state to Reno, Nevada, would also provide greater economic opportunities for the state and the area.

Other concerns raised during the tour included helping people who have been convicted of a felony find a career and a job, providing transitional housing for felons, veterans or the homeless who are trying to re-enter the workforce and providing education for adults and students for the new technology jobs that are coming online.

Kelly said that the U.S. has historically done a good job making sure that students receive the education they need to enter the workforce but he is worried that if the country does not stay on top of providing those skills to students and adults, that it could fall behind.

He encouraged the Arizona@Work board and the organization’s directors to contact him and his office with what they needed to provide services to the community.

Rodgers recently served as a guest host on the show. During the show none of the contestants buzzed in to provide the question to “Here’s this astronaut with his identical twin brother, Mark.”

“That’s Scott Kelly. His brother, Mark Kelly, senator of Arizona, and once a second place ‘Celebrity Jeopardy!’ finisher,” Rodgers said during the show.

Kelly responded with the tweet “Hey @AaronRodgers12. I think I got this one: What is … a rematch?”