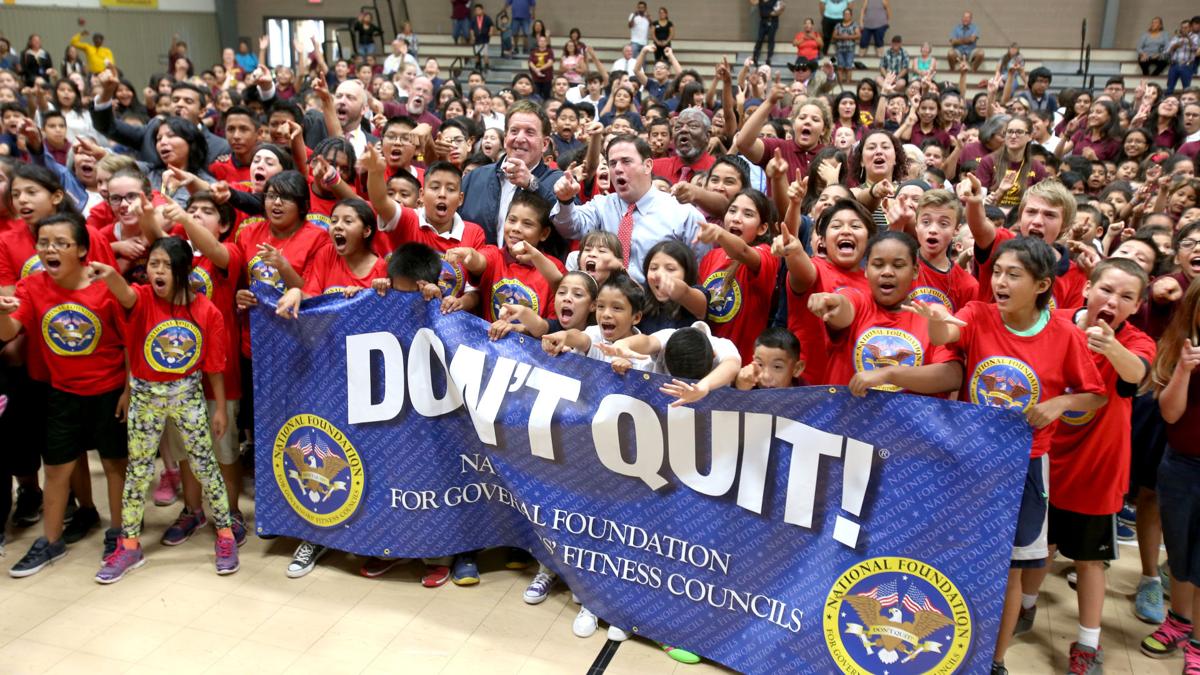 Jake Steinfeld, center left, and governor Doug Ducey with students during an assembly for the new fitness center Tuesday at Stanfield School. 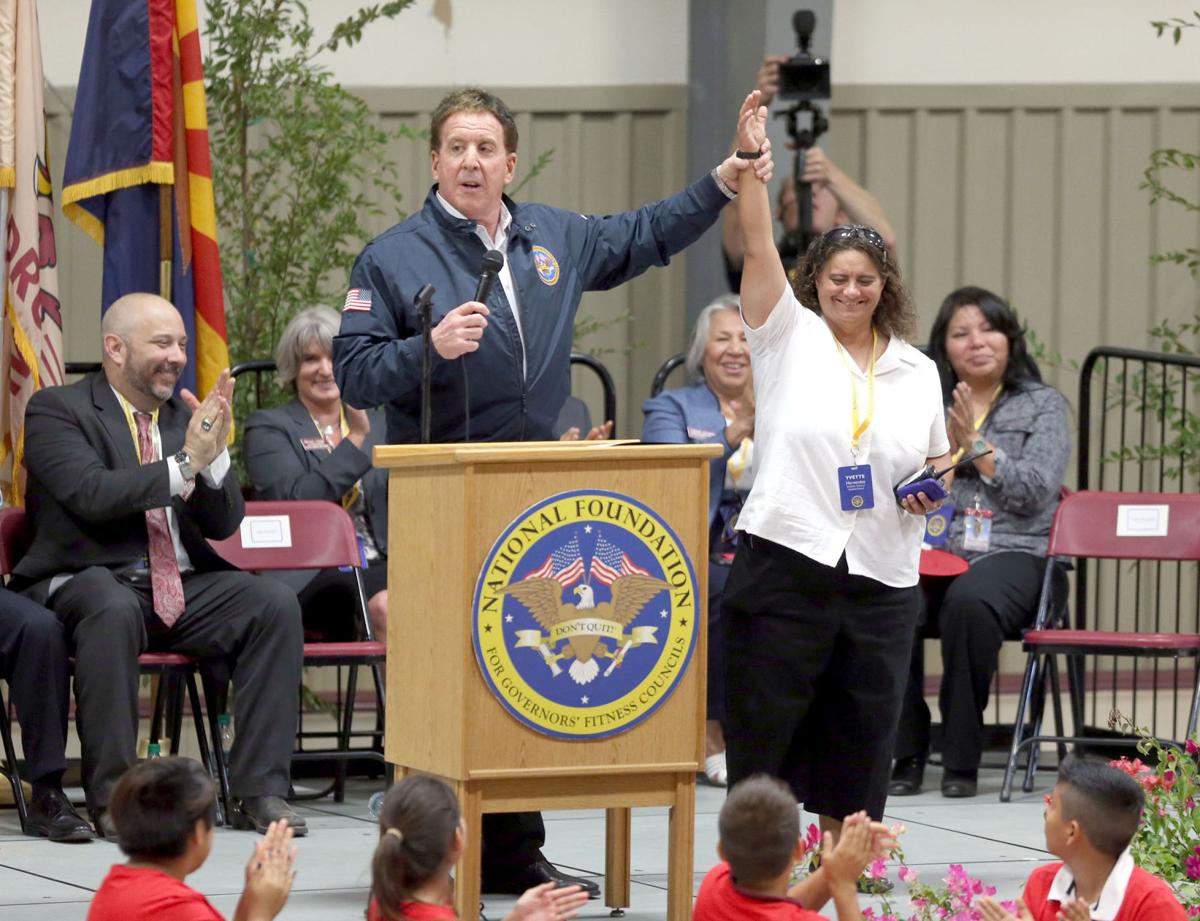 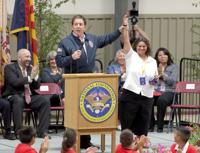 Jake Steinfeld honors Yvette Hernandez who was responsible for the appling for the grant to get the fitness equipment. 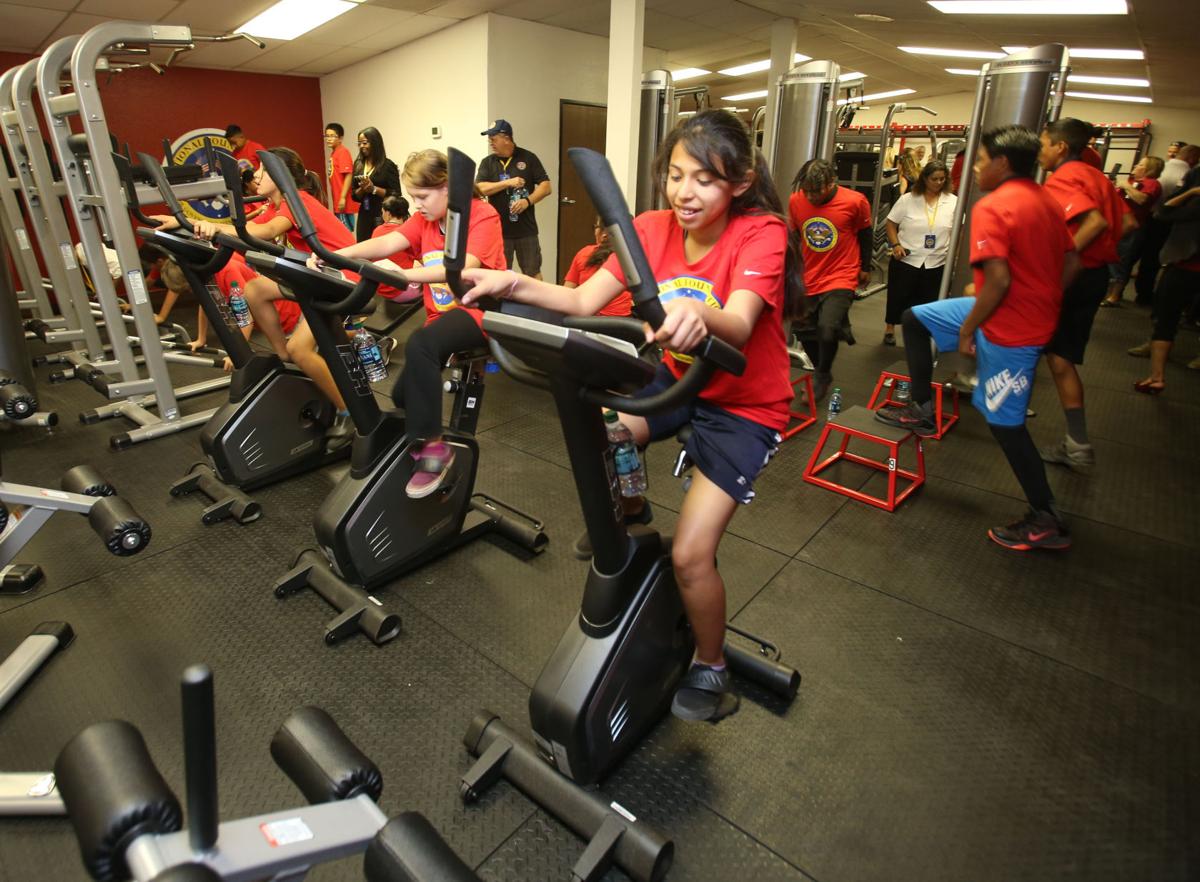 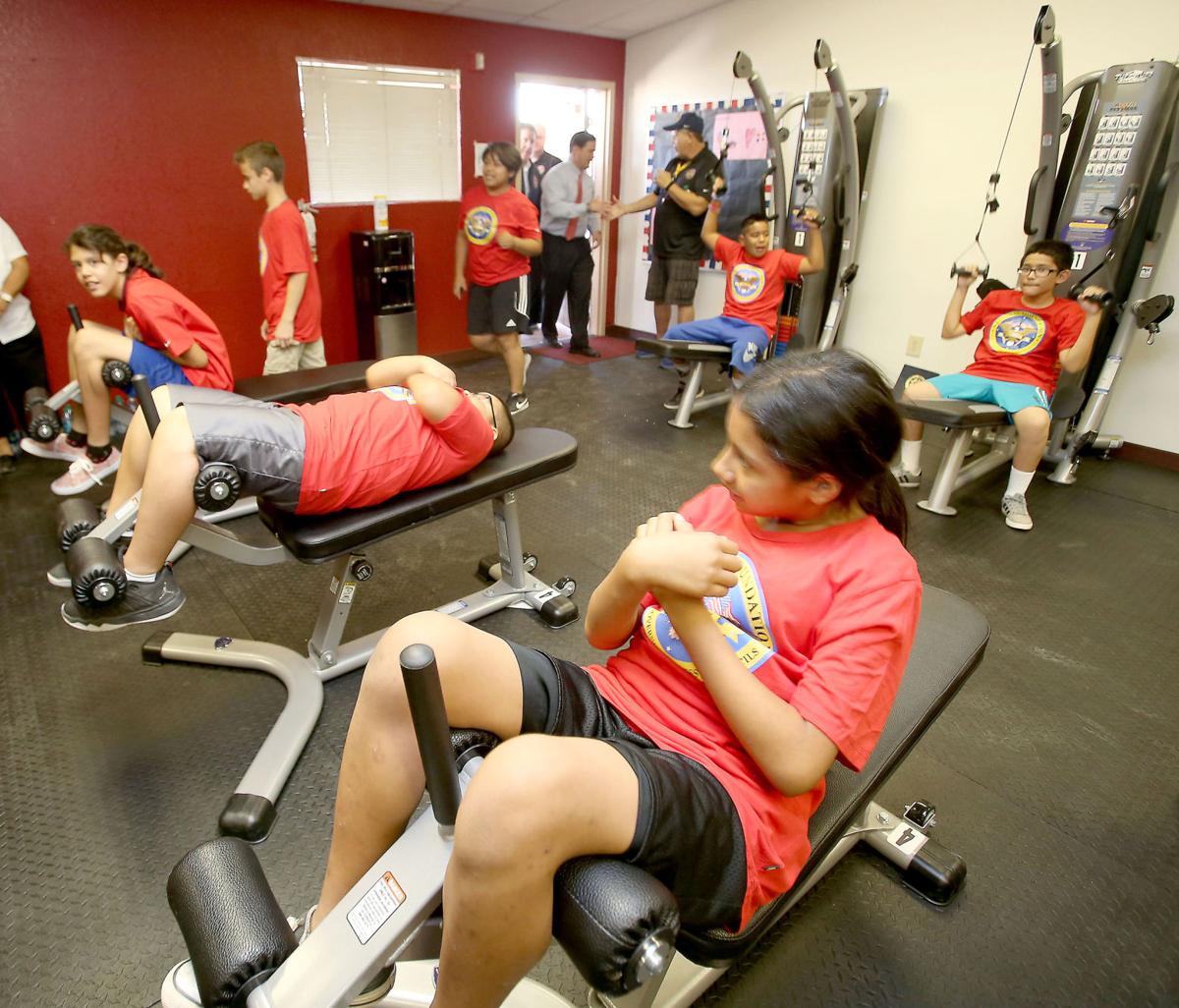 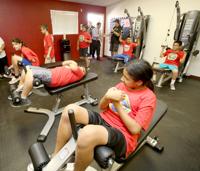 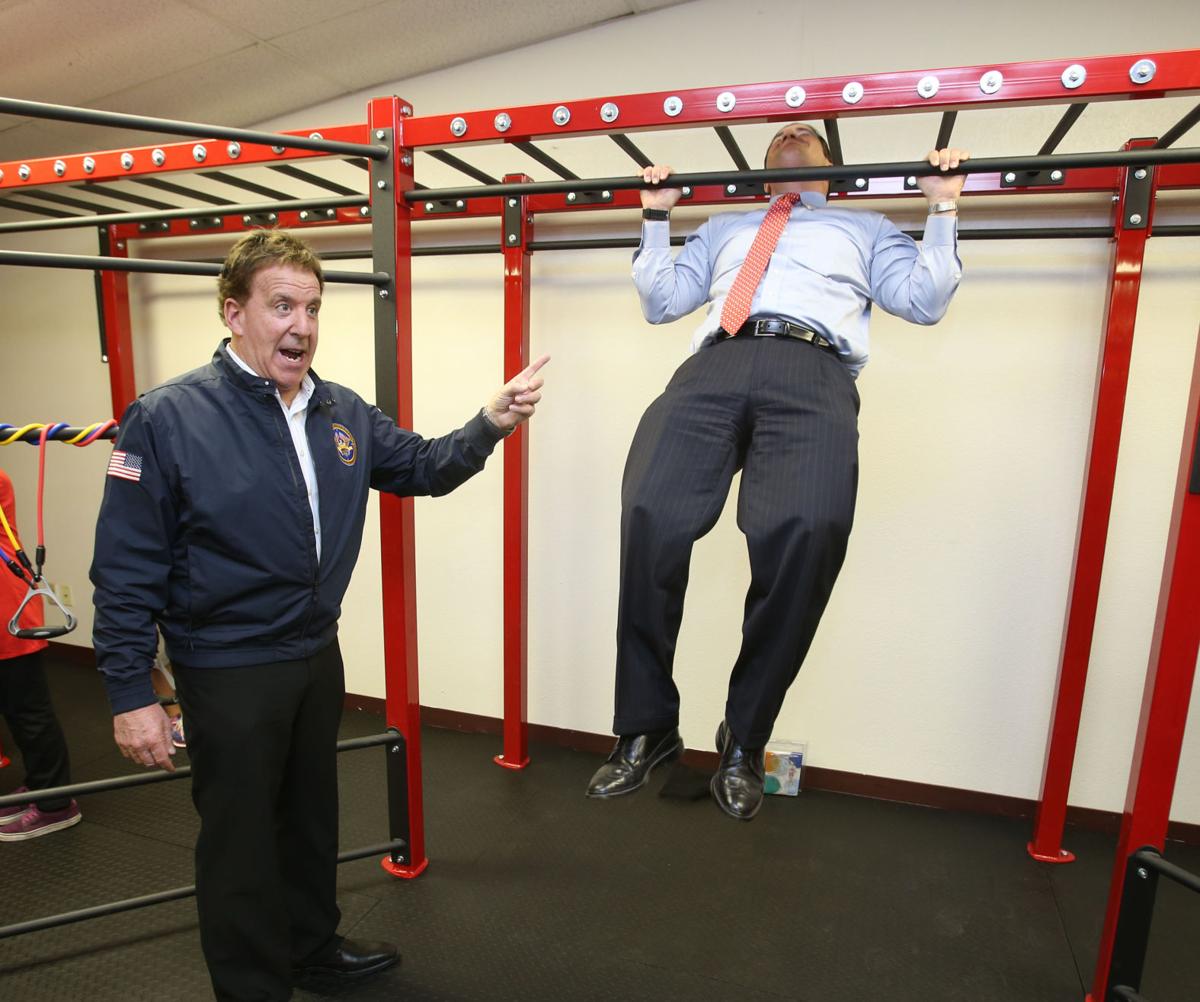 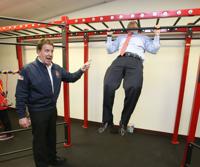 Jake Steinfeld, center left, and governor Doug Ducey with students during an assembly for the new fitness center Tuesday at Stanfield School.

Jake Steinfeld honors Yvette Hernandez who was responsible for the appling for the grant to get the fitness equipment.

STANFIELD — Gov. Doug Ducey was welcomed by staff and students of Stanfield Elementary School on Tuesday to celebrate the opening of the school’s new fitness center.

The small, rural school was selected over the summer by the National Foundation for Governors’ Fitness Councils to receive a roomful of new exercise equipment, valued at about $100,000.

The council goes to different states each year to allow schools to apply for a new state-of-the-art fitness center. Like other state governors, Ducey is often the first person contacted by NFGFC when the organization branches out to a new state.

While addressing rows of pupils inside the Stanfield Elementary gymnasium, Ducey told the students he knew it was good news when he got a call from NFGFC Chairman Jake Steinfeld, the fitness guru known for developing the “Body by Jake” brand.

He immediately wanted to allow Arizona schools the opportunity to be nominated for the fitness center program. Two other Arizona schools, Hollinger K-8 School in Tucson and Hulet Elementary in Holbrook, were also chosen to receive new equipment.

A group of Stanfield students were given first choice to enter the new fitness center after Ducey helped cut the ribbon of the on-site facility. Students immediately jumped onto elliptical machines, began pulling weights and doing sit-ups.

Yvette Hernandez is Stanfield Elementary’s physical education teacher and nominated the school to be considered by NFGFC. As soon as students plowed through the fitness center on Tuesday, Hernandez began circulating the room, passing out water bottles and encouraging students to keep moving.

She said she works hard to get her students excited about exercising and thinks the new equipment will make that job a little easier. The fitness center will be utilized during regular PE classes and for after-school sports training.

Teachers and staff members will also have the opportunity to use the equipment in their off-time. Hernandez said the ultimate goal is to open the facility to all residents in and around Stanfield.

“It’s a big deal for our community,” said Stanfield Elementary School Superintendent Melissa Sadorf, who thinks the school has already made progress in improving physical education.

The school district was given a Gold Award of Distinction by the national HealthierUS School Challenge for demonstrating excellence in health education. Sadorf said the district aims to educate the “whole child” because students can’t have healthy minds without healthy hearts.

The active involvement of a school’s surrounding community plays a factor in how NFGFC awards its fitness centers, said Steinfeld. The nonprofit wants to see a school that is supported by parents, teachers and local leaders.

The ribbon-cutting ceremony was attended by members of the Stanfield Elementary School board, Pinal County School Superintendent Jill Broussard and representatives of the Pinal County Sheriff’s Office.

Steinfeld told the Stanfield students that he himself was chubby as a child and suffered from a stutter. But his life changed after his father gave him a set of weights. The fitness professional grew up to coin the famous “Don’t Quit” motto — a slogan that is now stamped on the walls inside Stanfield’s fitness center.

Ducey commended the ability of NFGFC to create these fitness centers through public-private partnerships that don’t utilize public funds. Coca-Cola, Nike and the CareMore Foundation each contribute to building these facilities.

STANFIELD -- There is much to be learned about milk at the Shamrock Farms operation near Stanfield.