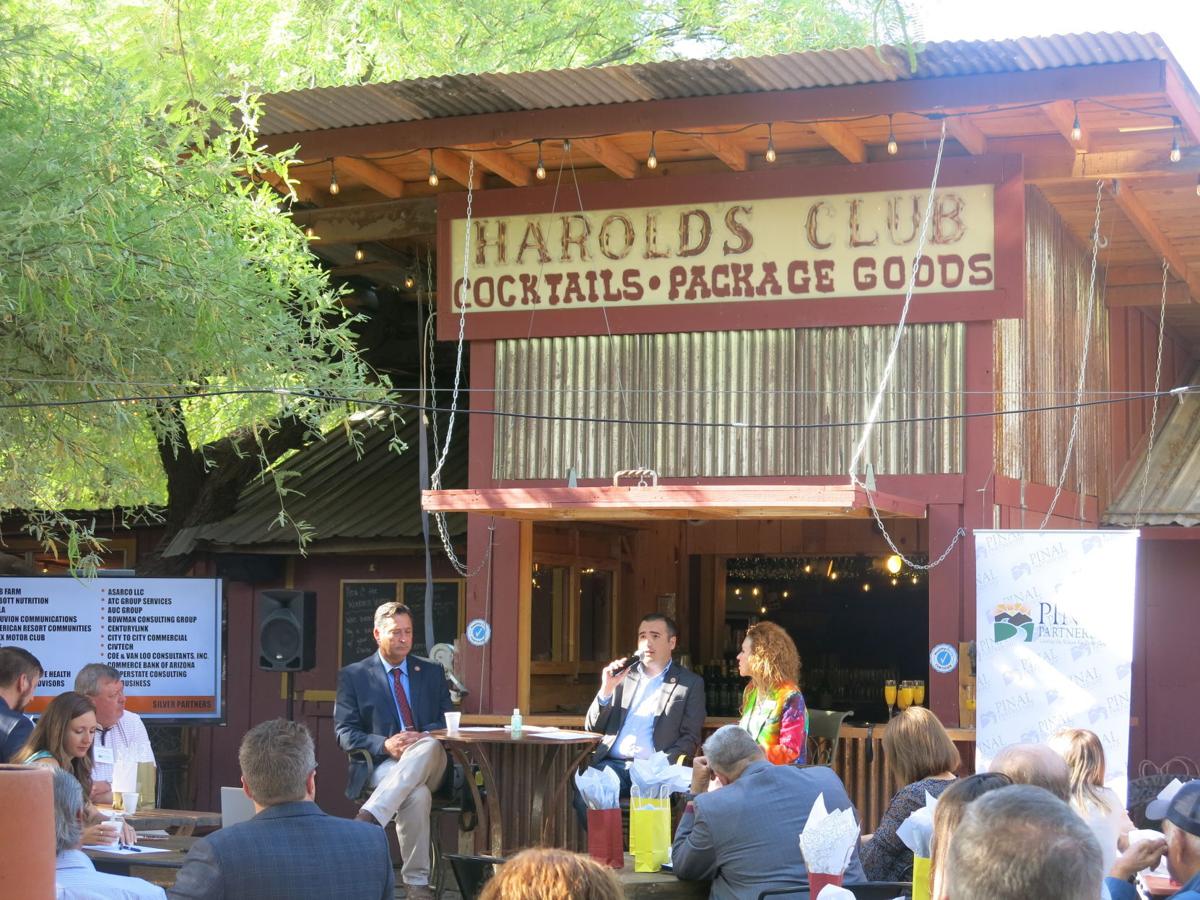 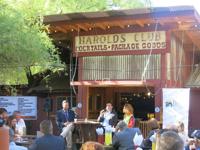 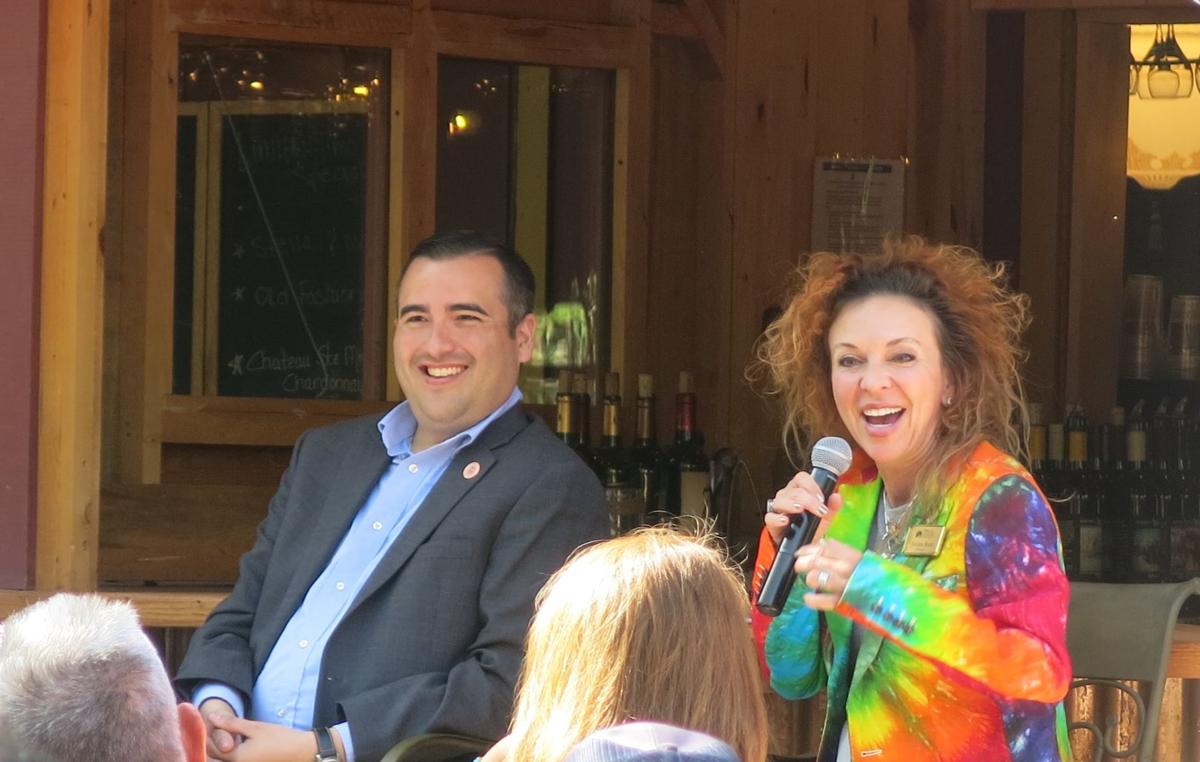 Sen. T.J. Shope, R-Coolidge, and attorney Jordan Rose of the Rose Law Group share a laugh during the question-and-answer portion of a discussion on recent legislation hosted by Pinal Partnership, which Rose moderated. 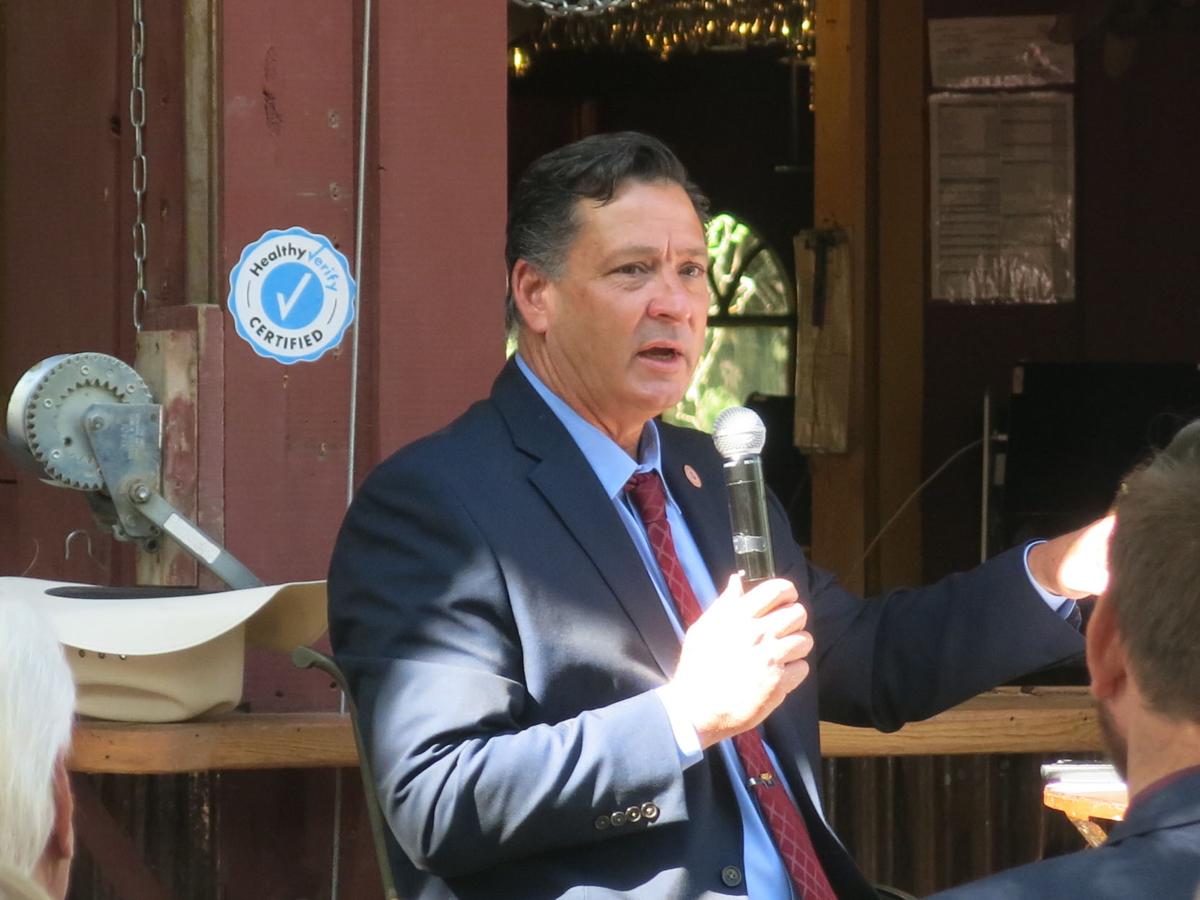 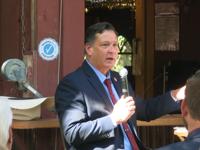 Sen. T.J. Shope, R-Coolidge, and attorney Jordan Rose of the Rose Law Group share a laugh during the question-and-answer portion of a discussion on recent legislation hosted by Pinal Partnership, which Rose moderated.

FLORENCE — Building bridges is important for both local infrastructure and political relationships. Such was the takeaway from the first in-person Pinal Partnership breakfast in over a year, featuring Rep. David Cook, R-Globe, and Sen. T.J. Shope, R-Coolidge.

During a question-and-answer session Friday at the Windmill Winery, the two legislators discussed how the strength of local partnerships among county officials has helped pave the way for legislation that helps the county.

During the hour-long discussion, Cook and Shope gave an update on many bills they had either helped pass or were advocating for.

The issue of water shortages was briefly addressed; Shope said Cook and he were “leading the way,” having proposed legislation that would approve certificates of assured water supply in Pinal county. The bill would allow older plats to be adjusted without moving to the “back of the line” at the Arizona Department of Water Resources.

Cook said it is important for the state and the county to bring in new water sources to offset losses from the drought and shortages in the Colorado River basin and San Carlos Reservoir.

“We need to bring new water into Pinal County,” Cook said. “Not trade paper or do shell games, but we need real wet water.”

Cook blamed the Biden administration for stalling a potential plan with Mexico to build a desalinization plant in the Sea of Cortez and pump the water back into Arizona. Cook said he hoped discussions would be taken back up in September.

Despite criticizing the Biden administration over the latter proposal, Cook and Shope were more hesitant to offer much commentary on the contentious vote audit currently taking place in Maricopa County. Shope did note that the audit’s taking place at all was a testament to the power of the state Senate’s leadership.

“If you ever question how powerful a position the presidency or speakership within legislature is,” Shope said, “don’t look any further than how the audit is going. There has never been a vote to conduct this audit.”

“Education is always going to be very important to me,” Shope said. “The ability for students to read at a third grade level helps with their ability to learn for the rest of their lives.”

Shope has served in the past on the Governing Board for the Coolidge Unified School District.

Both Cook and Shope touted the successful passing of a gaming bill to expand legal sports betting. Shope said the bill would generate hundreds of millions of dollars in new revenue for the state and make Arizona more attractive as a tourist destination.

“For the first time in the state’s history, we are bringing gaming off the reservations,” Cook said. “That is a huge step in the right direction.”

Two major infrastructure projects that were moving forward included an I-10 bridge over the Gila River, which recently received over $30 million in funding, and a Riggs Road overpass over State Route 347 near Maricopa.

Cook also spoke of the need for progress on plans for a proposed north-south freeway that would go between Apache Junction and Eloy.

“The government has worked on this project for 19 years,” Cook said. “To me that is unacceptable. I want to make sure (the Arizona Department of Transportation) has resources so they don’t shelve the project and we have to wait another 20 years for something to happen.”

Moderator Jordan Rose of Rose Law Group ended the discussion with a note of how excited Pinal Partnership was to have meetings in person again.

“My gratitude to everyone that came out today,” Rose said. “Just to see people in person again is tremendous.”

Arizona’s current historic drought may be ‘baseline for the future’

WASHINGTON — Arizona and other Western states just lived through the driest year in more than a century, with no drought relief in sight in th…