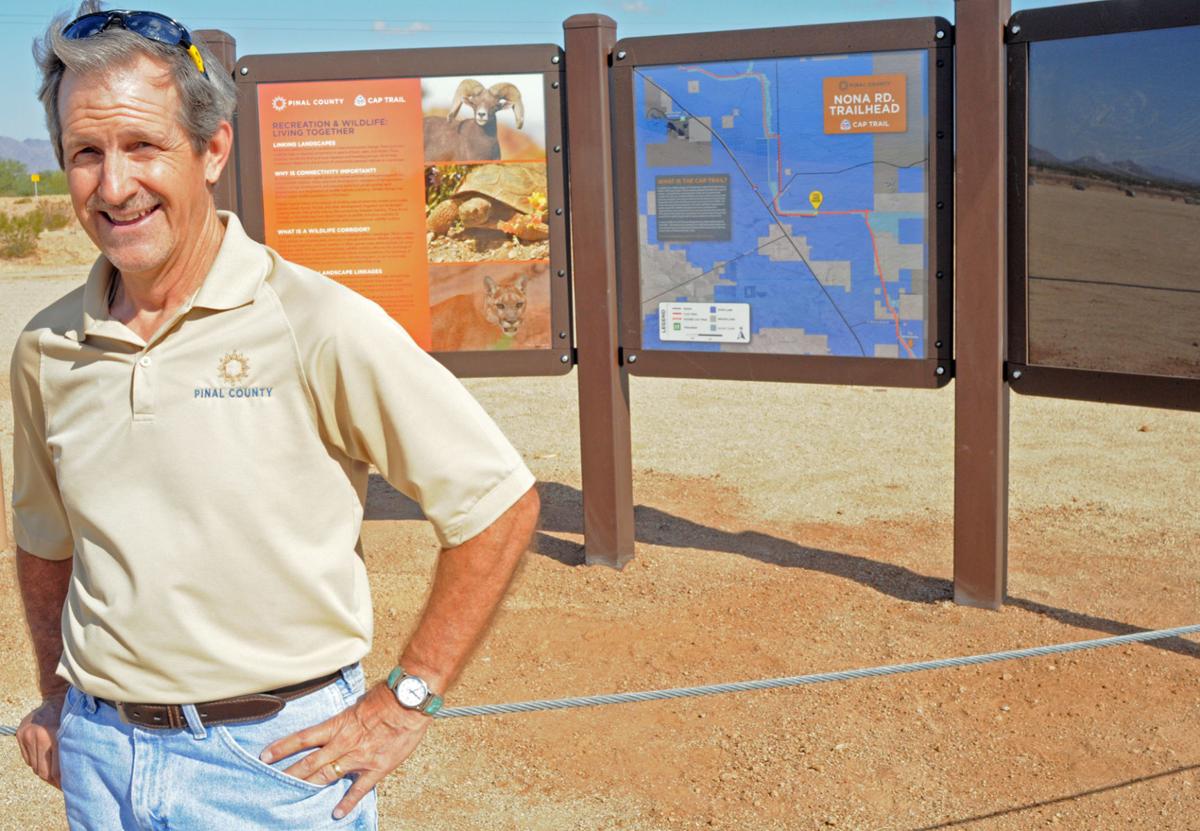 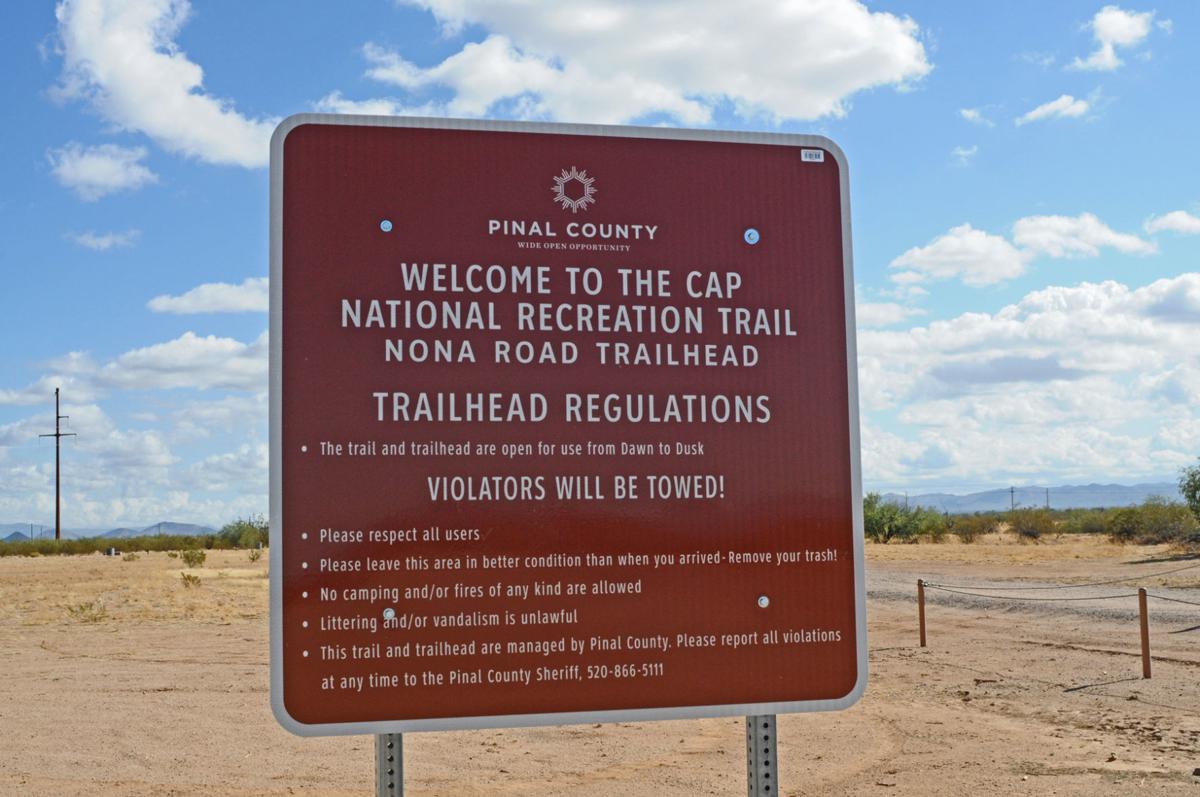 Kent Taylor has walked the length of the Arizona Trail. He’s hoofed up rugged mountains. He spends his leisure time hiking places like the Grand Canyon.

He’s been known to bike from his Casa Grande home to his Florence office, where he checks in as director of the Pinal County Open Space and Trails Department.

Last August, he biked a relatively easy 10.5-mile trail. It runs south from Nona Road to the Pima County line.

The trail was high on his list. It was, in a sense, his baby.

It will tie into a trail system that — when completed — will run the length of the Central Arizona Project canal. This is the CAP National Recreation Trail. The CAP provides the right of way. But it’s up to local jurisdictions to make the trail happen.

Pinal County is doing its part. Piece by piece.

Taylor has led the way. He’s worked with the advisory committees and the Board of Supervisors to put the trail on the drawing board. And now, with the Nona segment, underfoot.

The county published a CAP trail master plan in 2015. It’s 125 pages long. So a lot of work there. When completed, the 100-mile trail would follow the canal carrying Colorado River water from county line to county line, top to bottom.

The Nona segment is just the beginning. But it is a beginning.

“Government sometimes gets criticized because we do a lot of plans and we don’t do a lot of implementing,” Taylor said. “This shows we actually do have plans that we implement.”

I met Taylor on a recent Friday at the Nona Road Trailhead.

It’s a bit of a drive. Take Interstate 10 to the Picacho Peak Exit. Head south on the access road, then left on Park Link Drive. Take a quick right on Nona Road. When the pavement ends, follow the dirt segment to the Nona Road Trailhead.

You can’t miss it. It’s a large parking area with signs on sturdy posts. One sign shows creatures of Arizona, including a mountain lion. You won’t likely see one here. But coyotes and javelina are a common sight. Another sign shows a trail map.

Construction of the trail took 26 months. That included an environmental review. The signs were the last thing to go in. With some effort.

“The ground was hard as a rock,” Taylor said. “We weren’t expecting that. We thought we could just put holes in the ground.”

Others signs dot the trail. They’re trail markers. Or, in trail-speak, reassurance signs. It’s a good label. They reassure hikers they’re on the right path. Part of Taylor’s August bike ride was geared toward checking these signs, making sure they were in the right spots.

He came across a few places that needed signs, to keep hikers on the right path.

“I noticed we had a couple of spots … where it wasn’t exactly clear where we needed to be going.”

A few signs had been knocked down. They were fixed. A few signs went up, where needed.

But you can overdo it, Taylor added. Too many signs can distract hikers from the hike itself.

Taylor gave me the nickel tour in his official pickup. He’s allowed on the trail for county business. Otherwise, the trail is strictly for non-motorized use. Feet are allowed, as are bicycles and horses.

It shares passage with the canal’s service road. At the trailhead, the canal is underground. The trail shortly makes a jog toward a footpath. For seven-tenths of a mile, it winds through creosote and a few tree-sized chollas. A security fence separates hikers from the canal, which reemerges behind by a high berm.

Pinal County paid to have the fence moved, at least along this portion. Otherwise, hikers would have had to go well wide of the canal.

The fencing was a big part of the $150,000 price tag for the trail. A contractor hired a Tucson youth group — something along the lines of AmeriCorps — to build the desert section. Most of the trail, however, was ready made. It simply sticks to the service road.

As the canal bends from east to south, the trail rises to a service road atop the crest of a flood-control dike. The earthworks keep flood waters from the canal. The canal side is dry with little vegetation.

The east side is a green strip of flora, quenched by floodwaters.

Behind that saguaros stand tall. And mountain views are all-around. Toward the southeast, the Tortolitas. Behind them is Mount Lemmon. On the west side are the Picachos and Ironwood Forest National Monument.

It’s a view Pinal County had to push for.

“Ten or 12 years ago, I think there was a hesitancy on CAP’s part on letting this be the trail,” he said.

The agency wanted the trail to follow a road closer to the canal. It would be below the earthen works. No view. Just a flood control bank.

The county’s view prevailed. And so did the view afforded the hikers.

The trail crosses Missile Base Road, which offers trail access — if not a formal trailhead. Last July, Taylor checked out a recently installed trail gate. He spotted some women getting ready for a hike.

“I jumped out of the truck, went over and started talking to them. And they said, ‘Yeah, we saw this go up and we’ve been using it almost every day.’”

They replied: “Who are you?”

Just the guy who put it all together.

Beyond Missile Base Road, the trail ends at the county line. Pima County and Marana are working on a connection to Tucson’s Tangerine Road. But Taylor is focused on the trail going north, ending at Maricopa County. It’s in the Pinal County CAP trail master plan. Ninety miles, still waiting to be implemented.

Like a long hike, it’s one step at a time.

That first step will be celebrated with the grand opening of the Nona Road Trailhead at 9 a.m. this Saturday.

Coates: All aboard in Maricopa, except for the luggage

MARICOPA — Glen Alley began riding Amtrak in the early 1980s. He remembered his first trip. He and his wife, Pat, rode from Lake Tahoe, Califo…

Coates: Getting used to the sounds of silence at the rec center

CASA GRANDE -- Nikolina Sabo is a recreation coordinator. She oversees activities and classes at the Casa Grande Community Recreation Center.