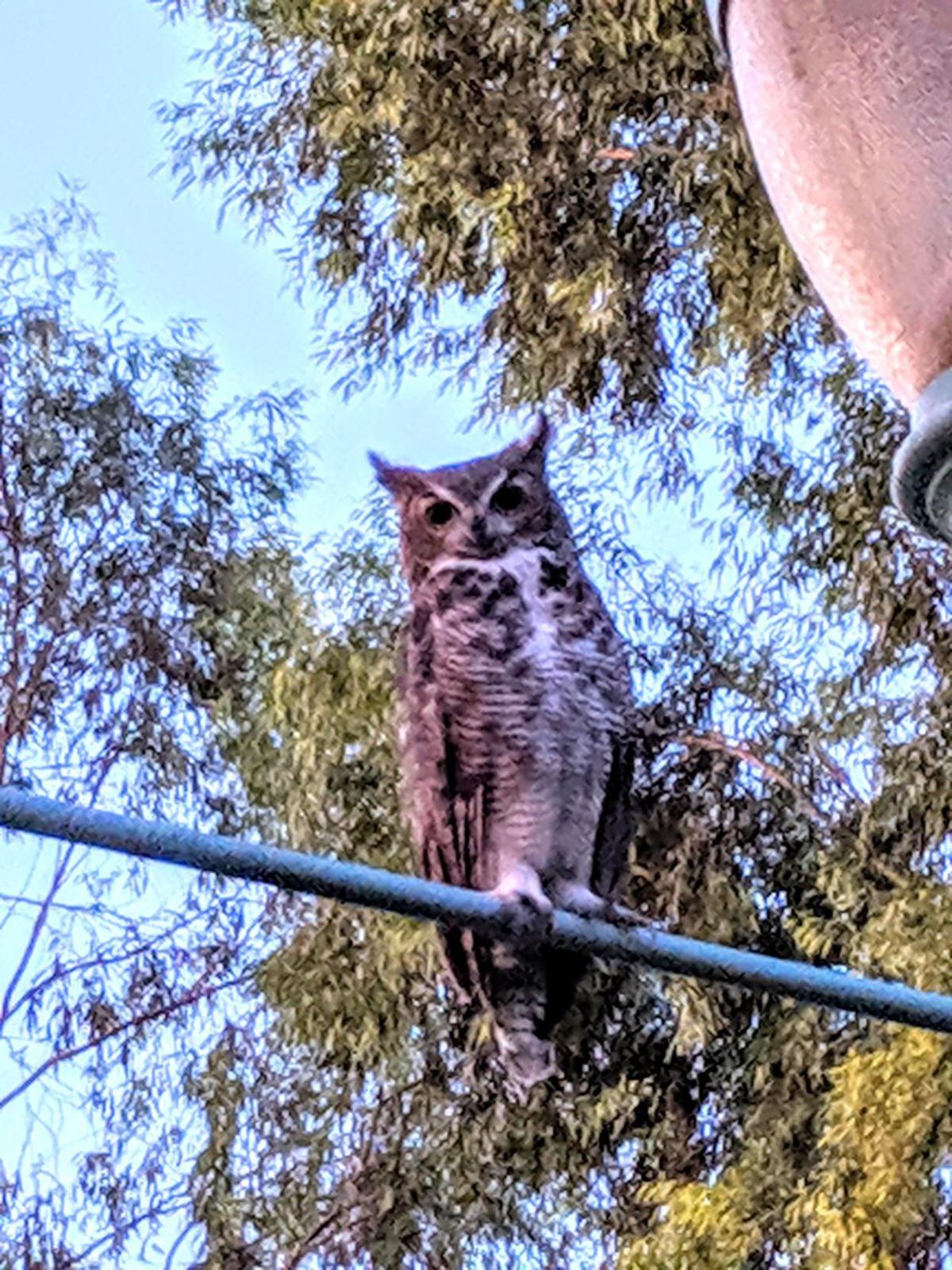 A great horned owl sits on a lamppost in Peart Park. 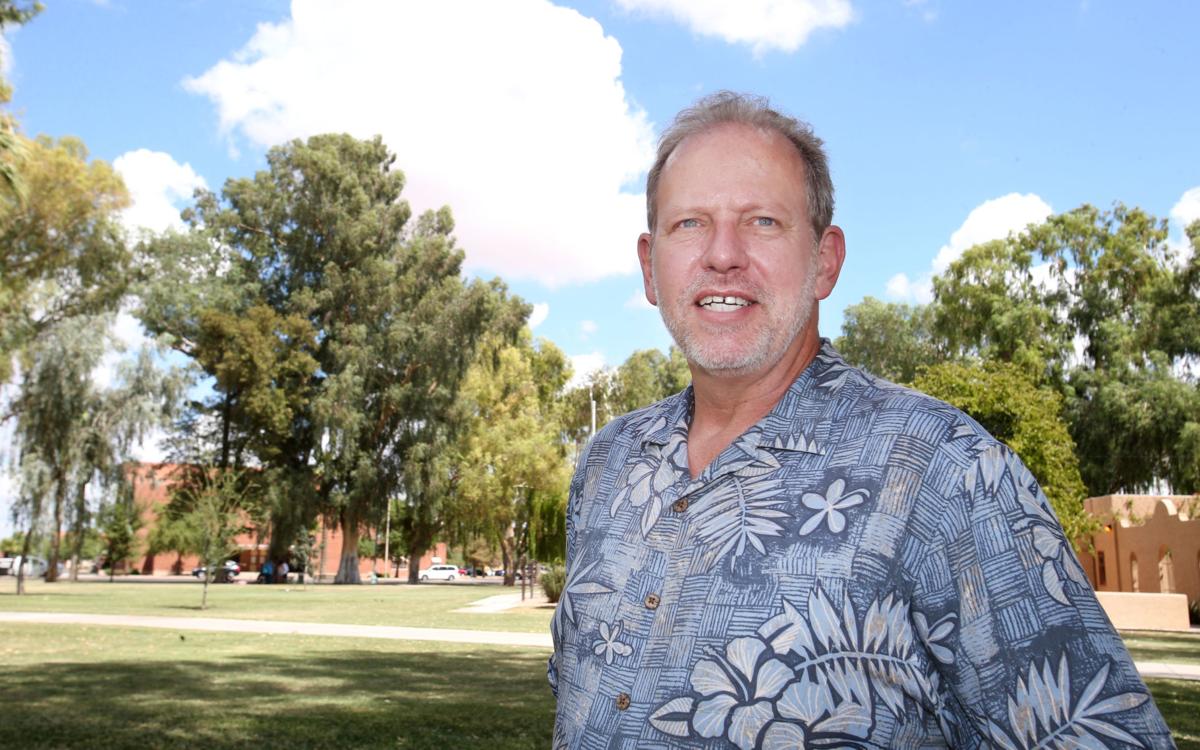 Bill Norrid stands in front of a line of trees along Florence Boulevard where owls and vultures roost last Wednesday in Peart Park.

A great horned owl sits on a lamppost in Peart Park.

Bill Norrid stands in front of a line of trees along Florence Boulevard where owls and vultures roost last Wednesday in Peart Park.

CASA GRANDE -- Bill Norrid grew up in Tempe. His parents instilled in him a love of nature, birds included. He went on Audubon field trips as a teenager.

After high school, he headed south to the University of Arizona in Tucson. He took a class in ornithology. In 1991, he moved to Casa Grande, where he taught high school. And found a bird mecca.

It’s a simple matter of geography. And trees. Casa Grande is surrounded by desert and farms. Outside town, there are few places for a bird to perch. In town, Norrid said, “Casa Grande is a mecca that calls birds in, for a safe place to roost.”

I met Norrid at Peart Park. For birds, it’s the high rent district. The towering eucalyptus trees offer luxury living for owls and vultures. Other birds roost here as well. Peart Park is like the oasis inside the mecca.

Norrid showed me around their avian subdivision. He pointed to a eucalyptus tree reaching for the clouds, and almost making it. A great horned owl was some 40 feet up, sleeping the day away. Norrid catches sight of it about once a month, often in the early morning, as he bikes or walks his dog.

The owl is a year-round resident. The park attracts winter visitors as well, including turkey vultures. Many summer in places like Utah or Colorado. In October and November, they make their way to Casa Grande — Peart Park in particular.

They spend their days circling the highways and byways, dining on roadkill. As day fades, they head for their roosts in Peart Park.

“They will come in by the hundreds at sunset,” Norrid said.

Casa Grande occupies Arizona’s northernmost winter range of the black vulture. It’s less common than the turkey vulture. But its eating habits are much the same. Just think: “Cleanup on Interstate 10!”

The city is home to barn owls.

“Burrowing owls you see almost daily,” he added. “They’re sitting right outside their nests in the morning.”

Norrid pointed to City Hall, northeast of the park. A kestrel lives beneath the eaves, he said. A kestrel is a small falcon. He’s seen it on the hunt, diving to take a nesting chick by the fountain in front.

Doves and pigeons are often on the menu. They’re plentiful.

“A big brother of the kestrel is the peregrine falcon,” Norrid said. “They were almost extinct.”

DDT had been killing them off. The pesticide was banned in 1972 and the peregrine falcon has since recovered. You might be able to spot a few in the winter, at Carr McNatt Park. They perch on the light standards, the tall ones used to light ballgames.

Norrid has seen them dive from the light pole and hit doves, midair. Their dive has its own word.

“The stoop. They do the stoop,” he said.

Peregrine falcons can migrate from as far away as Yellowstone National Park, he added.

“Their name, peregrino, means pilgrim, because they wander.”

Norrid’s own neighborhood, the Evergreen district near City Hall, offers a front-row seat for Harris’s hawks.

“Every single week, I have seen at least one Harris’s hawk in the neighborhood,” he said. “I have … watched the families, the fledglings being nested and trained and raised by the parents for the past 27 years.”

Norrid paused for a moment, then added: “I saw the Harris’s hawk this morning.”

Harris’s hawks, he said, travel in pairs. One hawk flushes out prey. Often doves. As they scatter, the partner grabs one.

Norrid has a lot of interesting bird facts. There’s the zone-tailed hawk. It looks a lot like a vulture. As it circles overhead, critters below think they’re safe. They see a vulture that only eats dead things. They’re in for a surprise. The hawk dives and lunch is served.

The zone-tailed hawk and vultures are land lubbers. But many birds take to water. And a big stopover for migrating water birds is lagoons that hold the city’s treated wastewater, near Kortsen and Burris roads.

The lagoons attract ducks, herons and other shorebirds, Norrid said. But he added: “It’s closed off to public viewing.”

Norrid would like to see something similar for Casa Grande.

He just might get his wish. The city has a design for a series of five ponds, separate from the lagoons, said Kevin Louis, the city’s public works director.

The ponds of treated effluent would run along the North Branch Santa Cruz Wash. They’d have two purposes. To recharge the groundwater. And to create an avian water stop open to the public. People could amble along trails and watch the birds fly in and out.

Construction could begin in three to five years, Louis said.

For now, all people have to do is get off their cellphones and look up. They might just catch a kestrel showing up for work at City Hall. Or an owl giving a hoot.

Coates: With murder afoot, no time for the pulpit

Cindy and I are not just boomers. We’re streamers now. We cut the cable a few years ago. We …

Coates: Small center in a CG park offers hope for the homeless

Now is the time to take stock. Look out over the landscape and note this summer’s casualties.

Coates: I’m a big influencer, if you ask my dogs

I get my share of PR spam. Most of it goes right into the deleted file. But recently I gave …

Coates: Looking back on a counterculture 50 years past

Rabbit Mejia was headed out of town, on foot. It was the summer of 1969, and Mejia was looki…

Coates: A household gallery drawn from a lifetime of brushstrokes

Coates: Too little of a bad thing isn’t always good for you

In the mid-1980s, the newspaper I worked at started a wellness program. We saw a nurse. We g…

Coates: Waiting at a truck stop for the next bus out of town

ELOY — I pulled up to Love’s Travel Stop shortly before noon on Monday, July 1.

Coates: Serving up a column from the back of the fridge

I’m offering leftovers today. I’ve scoured my refrigerator of a mind and found a few half-ea…