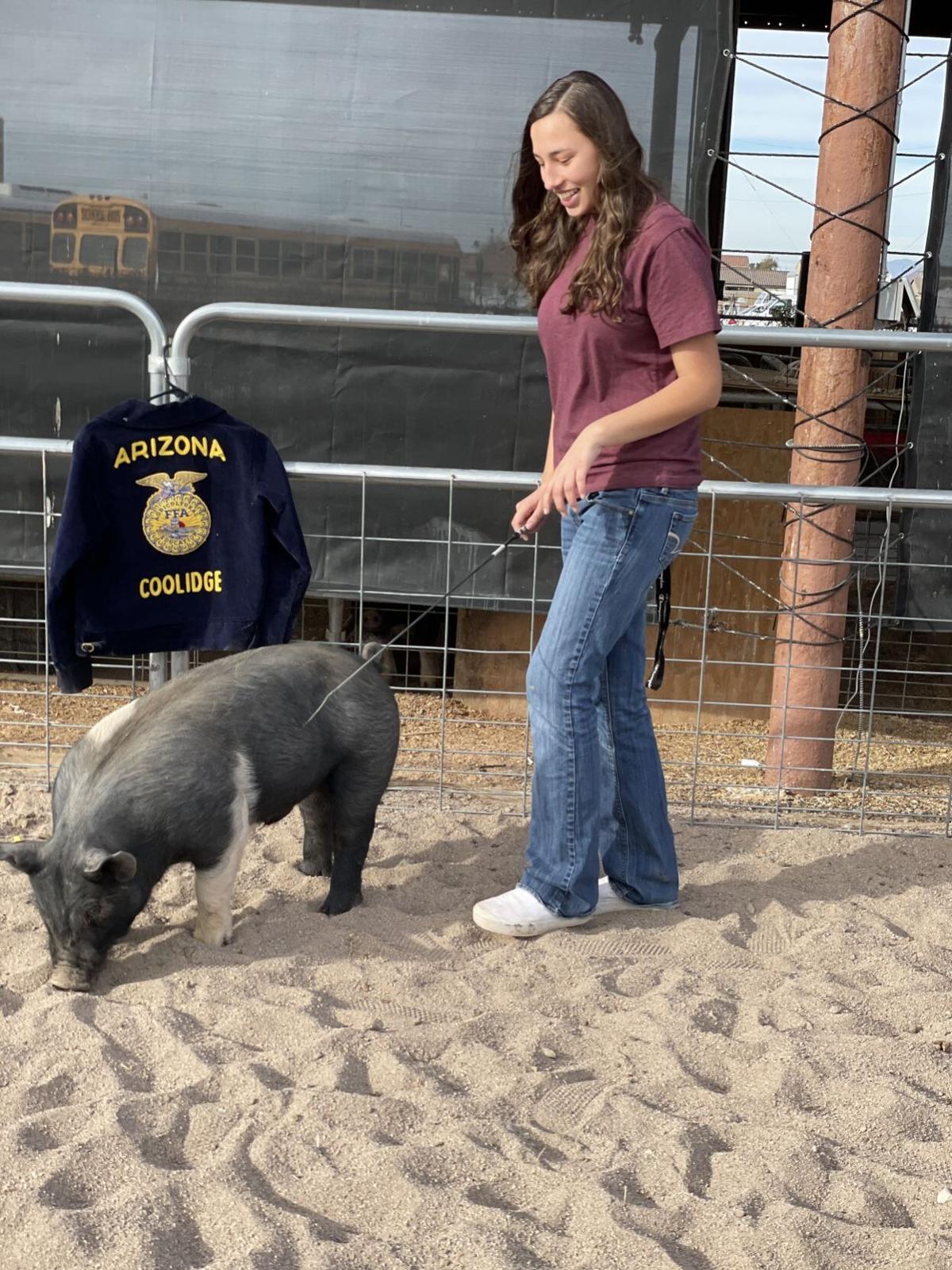 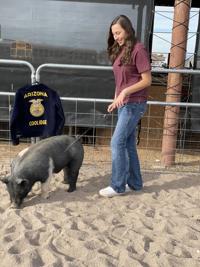 Kirstyn Garcia takes Marvin the pig for a walk around the sand pit at Coolidge High School. 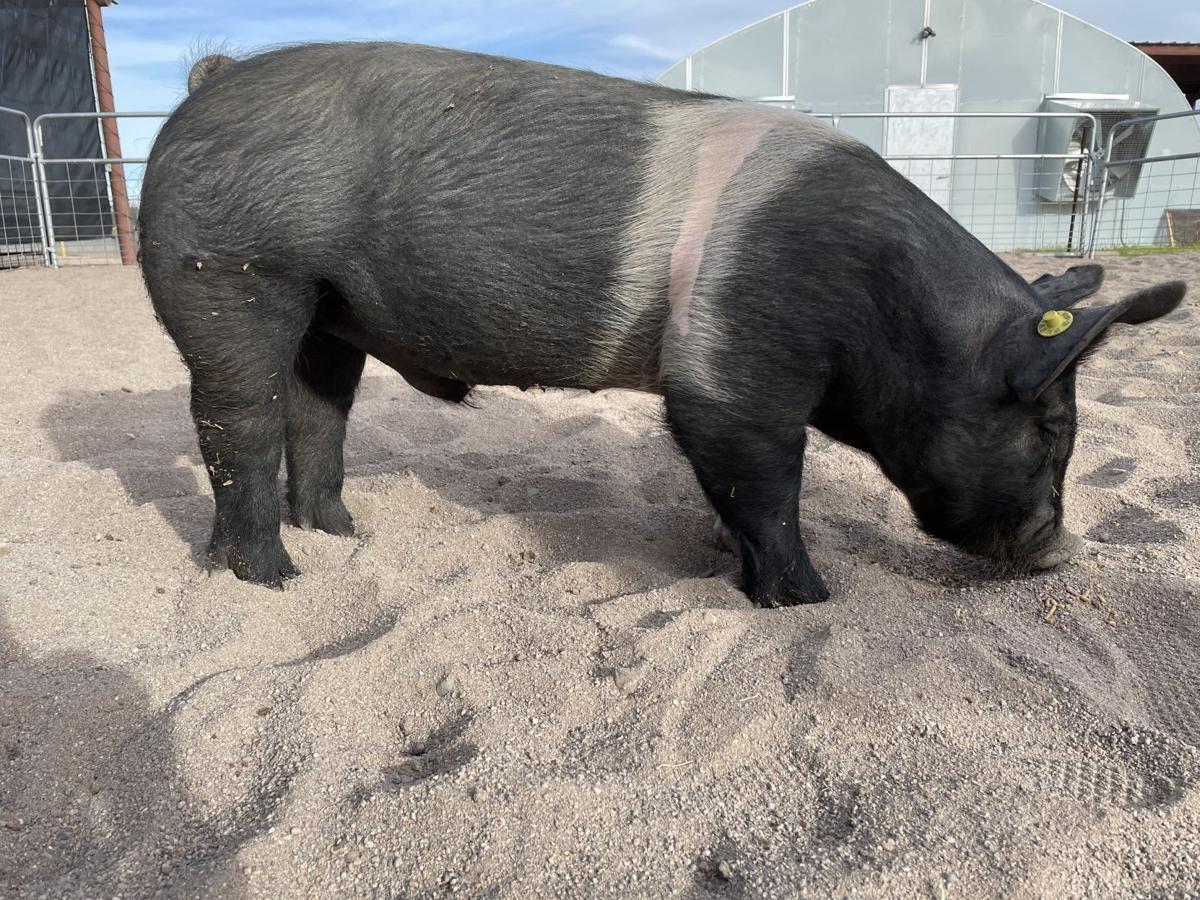 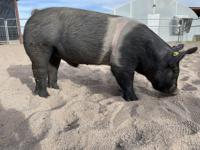 Kirstyn Garcia says Marvin the pig likes to run around a lot in the sandpit at Coolidge High School and can be very vocal when he's hungry. 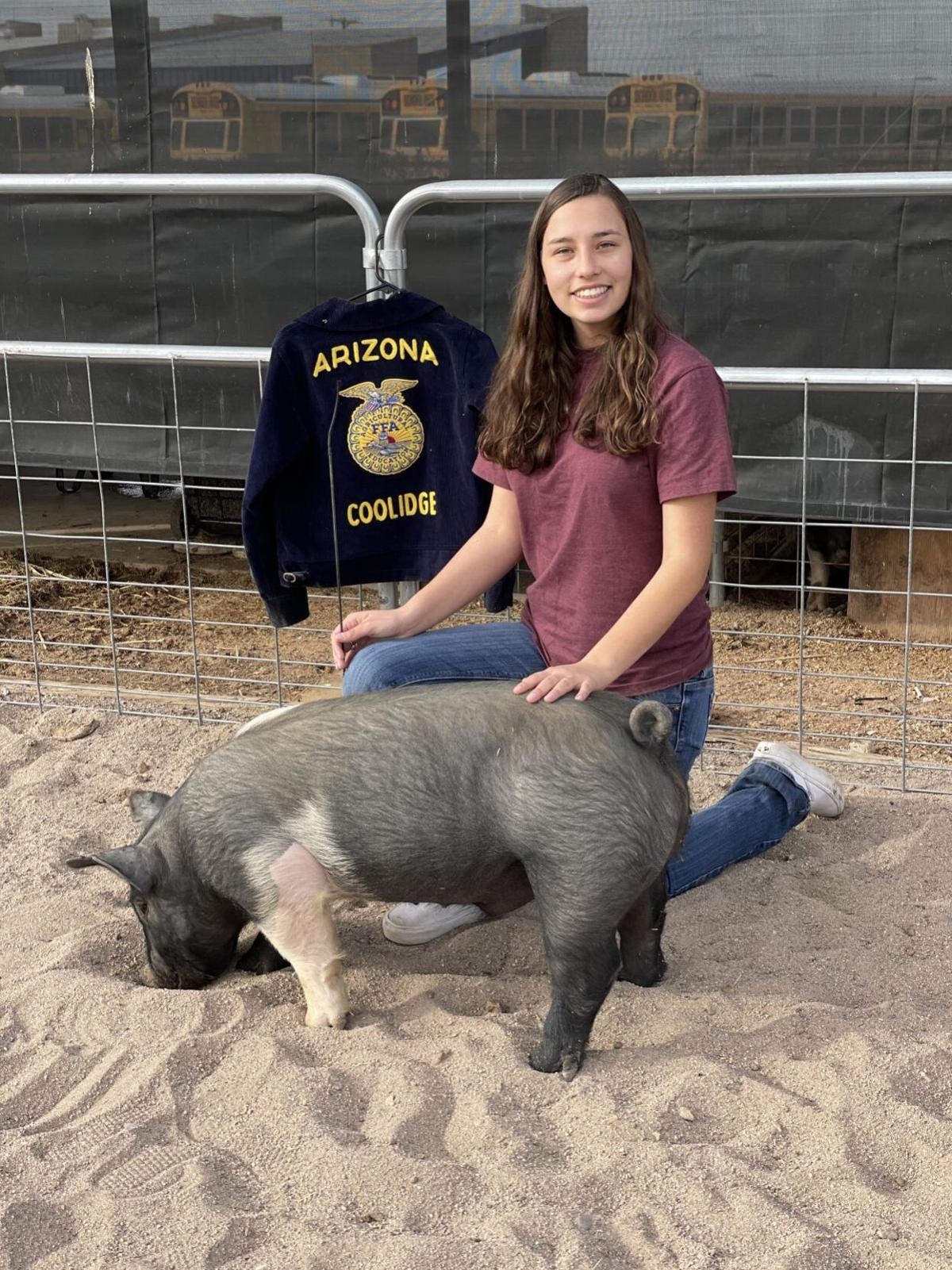 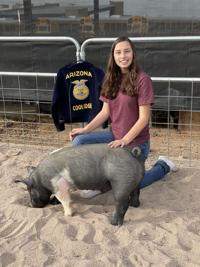 Coolidge junior Kirstyn Garcia poses with Marvin, the pig she is raising for the county junior livestock show this year.

Kirstyn Garcia takes Marvin the pig for a walk around the sand pit at Coolidge High School.

Kirstyn Garcia says Marvin the pig likes to run around a lot in the sandpit at Coolidge High School and can be very vocal when he's hungry.

Coolidge junior Kirstyn Garcia poses with Marvin, the pig she is raising for the county junior livestock show this year.

COOLIDGE — For her first two years of high school, Kirstyn Garcia raised a lamb for the county fair. This year, Garcia faced two major changes to her FFA project. One was a completely new — and mostly remote — procedure for Coolidge High School’s ag program.

The second was a switch in animals: Since November, Garcia’s had a young dark cross pig named Marvin. But working with the latter, Garcia says she’s embraced the new dynamic.

“It’s fun for me to learn how to work with different animals,” Garcia said.

She said that there is much more focus on specific weight and diets with a pig than with lambs. That forces her to make more precise measurements and focus on details.

According to Coolidge High School FFA Adviser Jadee Rohner, the pandemic has essentially forced students such as Garcia to become more independent, and some have taken the adjustment in stride.

“We have been lucky to continue to allow our students to raise their projects on campus,” Rohner said. “It’s challenging to monitor or support them, but kids are doing a great job and stepping up. From a teacher perspective I want to help them and hold their hand, but they have that capability, they just never had to do it for themselves before.”

Garcia said that she’s enjoyed raising a pig. Marvin follows her around and doesn’t leave her side while she’s cleaning his pen.

“When I first got him, Marvin was very playful,” Garcia said. “Kind of like a dog, really.”

Although she’s not sure of his exact age, Garcia estimates Marvin is still under a year old. For Garcia and others in the competition, an important part of the process is getting to know the animals and bonding with them.

“When I’m in the cage with him he will rub his head and nibble at my shoe or boots,” Garcia said. “I like letting him walk around and doing the training part. But I also enjoy just being in the pen with him, petting and brushing him.”

Garcia has family members who’ve raised animals on a farm, and she has two dogs, a French bulldog, Olive, and a Brussels Griffon, Cholipa, at her family home.

“When you get to the fair, showmanship awards are strictly based on your connection with the animal,” Garcia said. “You really have to focus on that relationship. If they get used to you, they will work better when you want to train them.”

During the fair itself, which will take place in March, the competition for pigs involves walking them around a show ring and using a stick or prod to tap them for instructions.

“The main focus is to keep the pig in a straight line,” Garcia said. “You need to make sure they’re listening to all the commands you’re giving them.”

Many of the students’ animals are on the land lab at the high school campus, an area with pens and cages separated by species. There is also a sand pit and mock show ring the students can utilize. According to Garcia, all students were given their own keys and encouraged to go on their own time — the students are required to feed their animal multiple times a day — so although there are students at the site all the time, they can practice social distancing.

Rohner said she is also on campus every Wednesday so they can stop in and purchase food or ask questions, although she acknowledges it’s still different from how it looked in the past.

Garcia credits upperclassmen for inspiring her in eighth grade when she started out, as well as an aunt who was in FFA and became an FFA chapter president. She began early getting active at the conventions and competing in different topics unrelated to raising animals.

Many students, including Garcia, were frustrated with the pandemic’s impact on FFA programs. Last year, the county junior livestock show was switched to an online program, but Garcia said there were connection issues with so many on the website at once. The Coolidge students also made decorations for the event that got scrapped.

What will become of Marvin after the fair? Garcia has mixed emotions at the moment but acknowledges that he will likely be sold and killed for meat. Some students do buy back their animals and bring them home to live for another year, become part of a breeding project or even keep their animals as pets, but that is a less common scenario.

“It’s tough for kids,” Rohner said. “That is something they go through, but they start with the end in mind. They know what the purpose of this project is and they learn about the animal science portion of it. Our industry produces animals for human consumption.”

Garcia is hoping to use the money she makes from Marvin to help pay for college expenses down the road. According to Garcia, students typically use the money they earn year to year to help pay down the costs of the next year’s project.

“Some kids really love the process and will take that money they earn and reinvest,” Rohner said, “whereas other students are thinking, ‘Wow! This is a lot of work!’ so they will do a different project next year.”

Garcia is expecting to earn around $800, not including add-ons from local sponsors, and plans to raise a pig again for her senior year.

“I want to go into the medical field but there are a lot of skills I’ll take with me,” Garcia said. “I’ve learned a lot about finance, and other things about precision and measurements, that I can take with me to the real world.”

COOLIDGE — Last year, Emily Schmitt was part of the first Coolidge team in 25 years that qualified to compete at the National FFA Convention ……