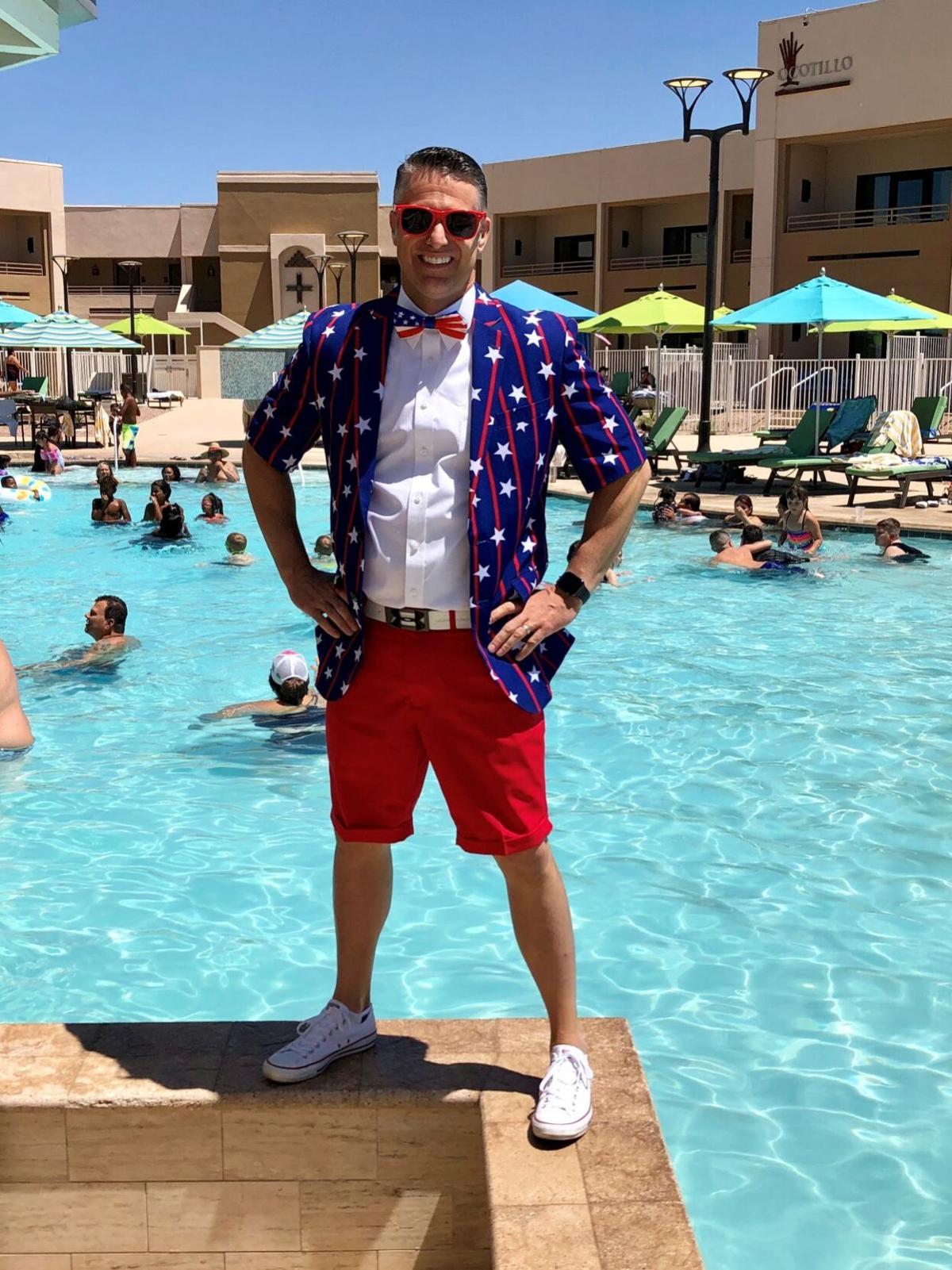 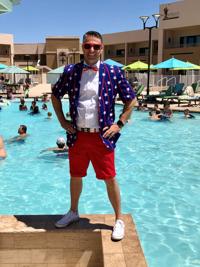 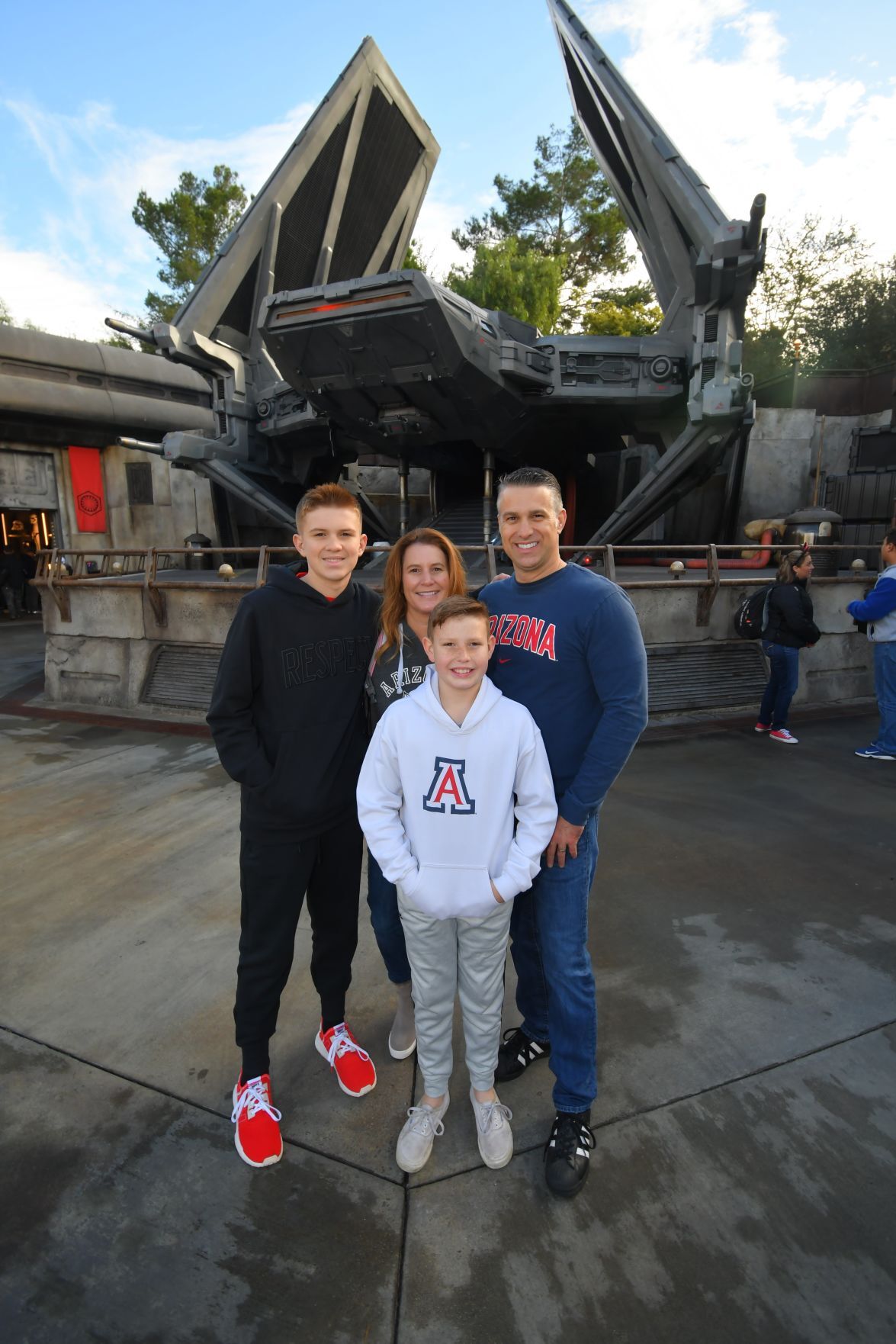 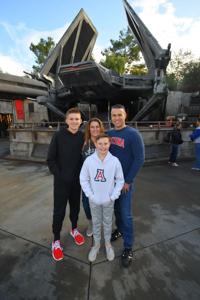 Michael Kintner, new senior vice president and general manager for Harrah’s, enjoys a visit to a Disney park with his wife, Amanda, and their two sons Mason and Chase.

Michael Kintner, new senior vice president and general manager for Harrah’s, enjoys a visit to a Disney park with his wife, Amanda, and their two sons Mason and Chase.

MARICOPA — Lounging by the Harrah’s pool on a hot Fourth of July or playing the slots on a busy holiday weekend, patrons of Harrah’s Ak-Chin Casino might bump into a wildly dressed man — possibly in an American flag suit.

That’s Michael Kintner, a 15-year veteran employee of Harrah’s and, as of Aug. 31, the senior vice president and general manager for the resort and casino.

Kintner has traveled an interesting road that led him to Harrah’s. His father was in the Air Force, so he spent a great deal of his childhood living overseas in England, where Kintner rode horses competitively. The family spent time in Turkey, too, before eventually returning to the States and settling in Kansas.

“Kansas is the most foreign country I’ve ever lived in — if you’ve been to Kansas, you know what I’m talking about,” he quipped.

Kintner considered law school while attending Kansas University but decided against it and instead asked his mom for a favor.

“They had a horsemanship class at KU, and I asked my mom if I could take that class,” he said. “I went out and I started riding, and I did the next semester and I joined the equestrian team out there.”

He briefly considered becoming a horse trainer, but with his dad’s advice ringing in his ears, he instead pivoted to attend the University of Arizona for its Race Track Industry Program on the agriculture area. There he met his wife Amanda, and they made the move to Southern California.

“We got married at that time,” he said. “I worked in Santa Anita for about nine years in marketing, kind of chasing that horse dream from when I was a kid. But over time I kind of saw horse racing, which back in the early- to mid-1900s was like the NASCAR of its day … (I saw) a little bit of decline and casinos were clearly growing and on the way up.”

It seemed logical to Kintner to make the jump to Harrah’s, and after moving back to Chandler, he was hired as the casino marketing manager. In the 15 years since then, Kintner has worked his way up the ladder, had his two sons, Mason, 14, and Chase, 13, and earned an additional master’s degree from UA along the way.

On the one hand, Kintner said one of the best parts of the job is being able to keep his kids in one place.

“I wanted to keep my kids in one spot all the way through high school if I could because I had to move around so much — like every three years,” Kintner said. “So it’s afforded me that opportunity, which is fantastic.”

Kintner says aside from the personal rewards the job offers, he finds his work with Harrah’s to be fulfilling.

“Honestly, I wouldn’t want to be anywhere else. Working for the Ak-Chin Indian Community is very significant for me, it really is like a family-type setting,” Kintner said. “We just celebrated 25 years in December, and we’ve managed it the entire time. As far as I understand, it’s the longest management agreement in Indian gaming.”

Kintner’s promotion isn’t Harrah’s only recent celebration. In July, Caesars Entertainment announced the completion of a merger with Eldorado Resorts to create the largest casino and entertainment company in the United States with locations in 16 states.

Kintner said the company is chock full of employees boasting employment records similar to his own.

He takes over for Robert Livingston, who moved to assume the role of senior vice president of tribal development and general manager in Southern California.

“I’m most excited about continuing the great culture here at Arizona Ak-Chin,” Kintner said. “Working for all these fantastic people from all the fantastic employees with all their wealth of experience and knowledge and the great service that they provide, along with the owners, the Ak-Chin Indian Community, continuing to work for them.”