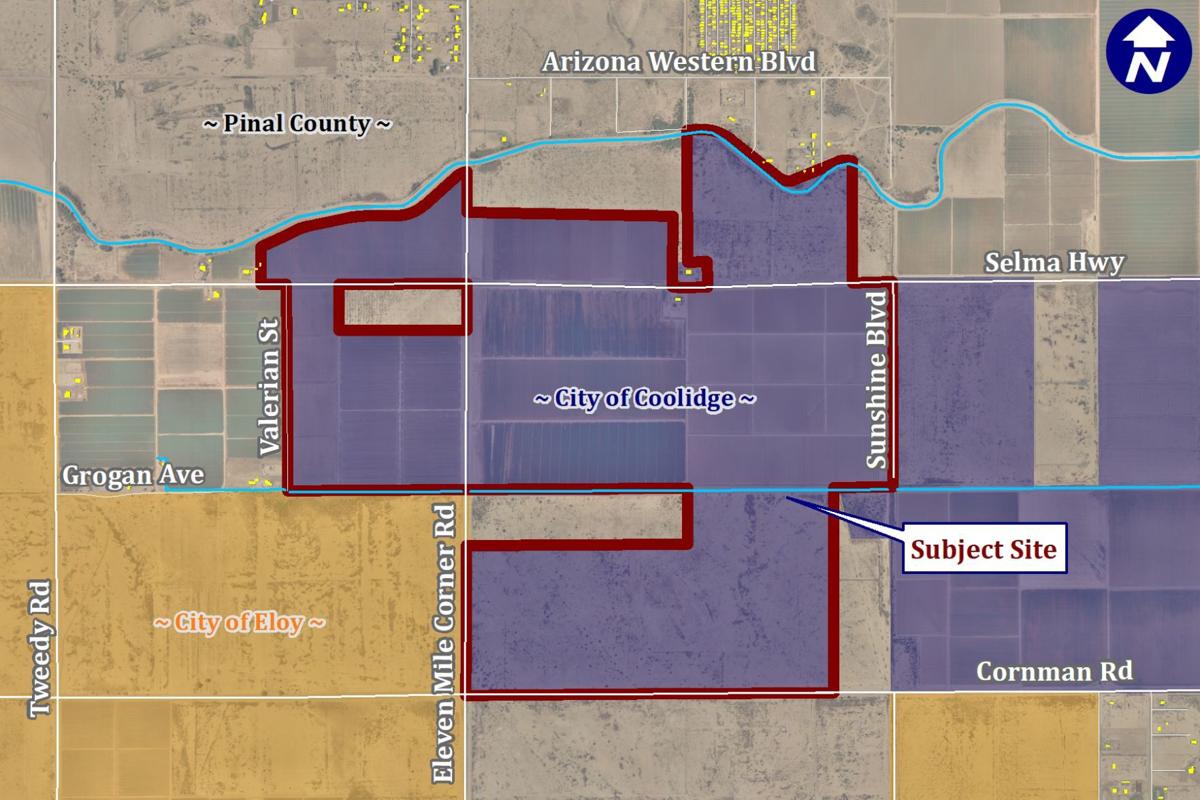 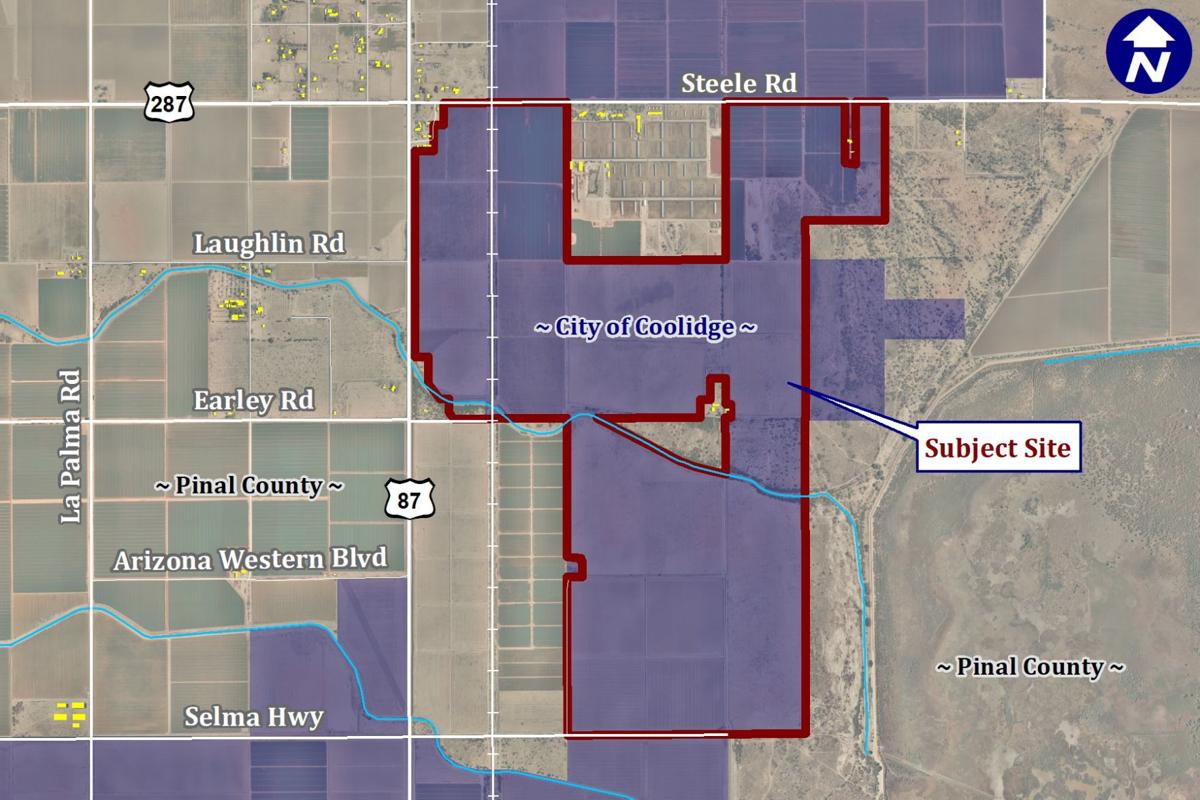 Map for the Saint Solar LLC site, a massive solar farm to be located between Steele Road and Selma Highway.

Map for the Saint Solar LLC site, a massive solar farm to be located between Steele Road and Selma Highway.

COOLIDGE — The Coolidge Planning and Zoning Commission has approved the site plan for a massive solar plant within city limits between Steele Road and Selma Highway.

The plan for the proposed plant, which boasts a 20-year lifespan, was approved during a meeting of the commission on Oct. 9.

Construction on the project is expected to begin in January 2020, according to Wardah Abbasi, developer for Saint Solar, with the project likely coming online in December 2020.

Saint Solar will connect to the Pinal Central plant. In addition, Abbasi noted that solar site will not include battery packs.

The site plan also proposes to implement an oleander screen around parts of the property for aesthetic purposes.

City Manager Rick Miller described the project as an ideal interim use for the land while Pinal County waits on the development of the North-South Freeway — one of several projects that would be financed through the Regional Transportation Authority sales tax if it is upheld in court.

“The future for this property, and the potential for economic development along that freeway, is going to be far greater than the solar some day,” Miller said. “I think that this is one of those land use decisions that is a great interim use.”

However, there was some concern voiced by local property owners about the proximity of the site to nearby residences.

Jim Goldman, owner of Goldman Dairies, which would be surrounded by the plant on all sides, asked that the P&Z commission consider approving the site plan with the stipulation that NextEra give the dairy a 200-foot setback around the west side of the property near the homes located on the property.

His concern stemmed from what had previously been done at Pinal Central, citing the overgrowth of weeds and the death of trees that were planted on that property.

But Miller indicated that under this project, NextEra Energy is required to maintain the landscaping as part of the conditional use permit.

“We are stipulating that they put in some kind of drip irrigation system to maintain a healthy screen,” he said. “If it’s not maintained in a healthy manner, they are in violation of the conditional use permit.”

The issue was also addressed by Abbasi, who noted that the company was taking steps to correct the landscaping problems at the Pinal Central solar site by investing $100,000 into the maintenance of the property.

“We plan on doing (something) similar at Saint Solar,” she said.

Tom Bagnall also expressed his concern over the Pinal Central solar site, which neighbors his property. Among the issues he and his wife, Penny Bagnall, encountered with the project area a lack of landscape maintenance and dust control during the construction phase of the project, he said.

However, NextEra Representatives stated that they were committed not to repeat the same mistakes.

During the meeting, the company agreed to work with the Goldmans to meet the conditions set out by the commission. Miller confirmed that a private meeting between the company and the property owner has been scheduled for Wednesday to further discuss plans for a buffer between the Goldman property and the solar plant.

But Saint Solar is not the only renewable energy project making its way to Coolidge.

The commission also approved a site plan for an 851-acre solar farm to be located at Selma Highway and 11 Mile Corner Road. The application was submitted by Sustainable Power Group, or sPower, which owns more than 150 renewable energy assets around the U.S.

The project is currently subject to a 100-megawatt Power Purchase Agreement between sPower and Salt River Project and will likely begin delivering power by the end of 2020.

The farm would generate about 277,000 megawatt hours per year. According to Jordan Levin, project developer for East Line Solar, the power generated by the facility would be enough to supply about 35,000 homes and would displace nearly 200,000 metric tons of carbon dioxide emissions — the equivalent of removing 41,000 cars from roadways.

Levin also indicated that the company hopes to have a positive impact on the Coolidge community during the life of the project.

She noted that as part of bringing the project to the region, sPower plans on providing educational opportunities to the public to better inform area residents about the site. As part of that community outreach, she identified strategies such as giving local schools and community members presentations and site tours throughout the construction and operation of the project.

“Basically we like to consider ourselves a good neighbor,” Levin said. “We’re here for the life of the project so it’s important for us to develop these relationships with the community.”

The company also anticipates that it will employ approximately 150 to 300 people during the construction phase. Representatives from sPower indicated that the company’s investment in the first phase of the project, which includes the land, is over $100 million.

Construction on the East Line Solar farm will likely begin near the end of the first quarter of 2020.

SIGNAL PEAK — Using the sun to power a battery might be easier than pedaling a bicycle, but …

PHOENIX — The population is rising, water is scarcer and demand for energy is growing.

FLORENCE — If there is one thing Pinal County has plenty of, it’s sunshine.