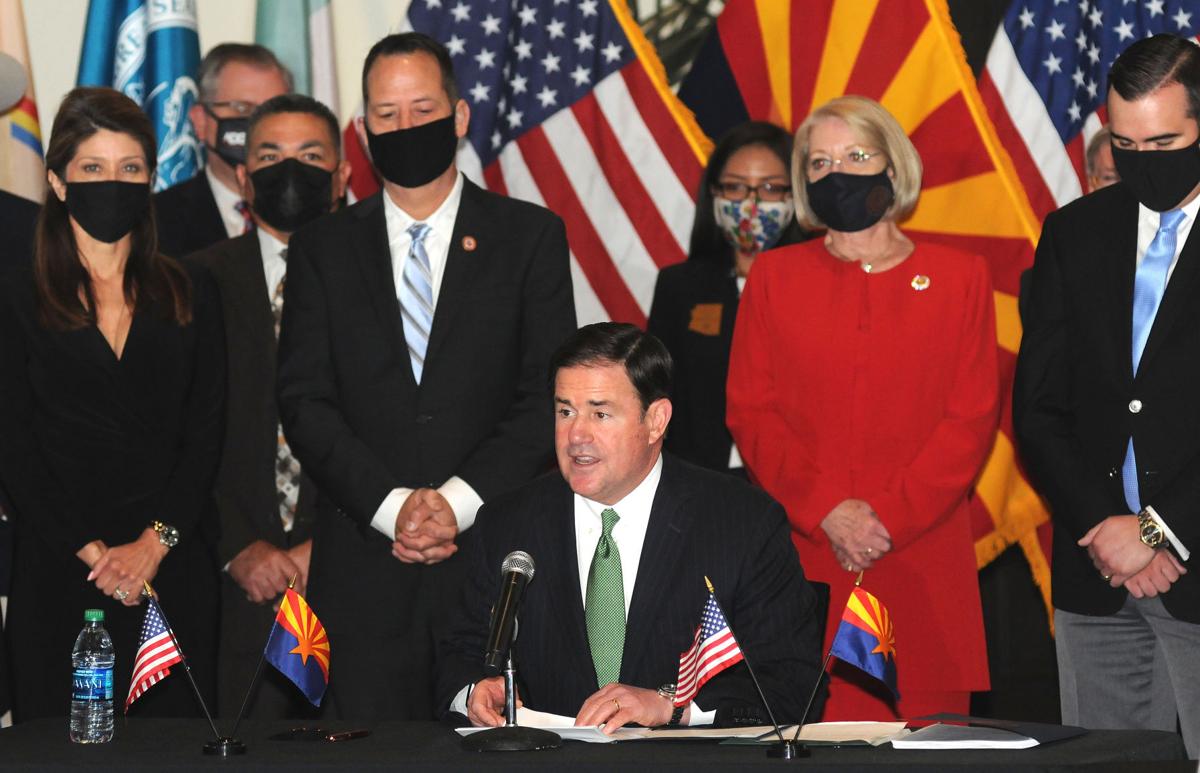 Surrounded by legislators, Gov. Doug Ducey on Thursday explains how he believes the benefits of the new tribal gaming compacts being signed outweigh any drawbacks. (Capitol Media Services photo by Howard Fischer) 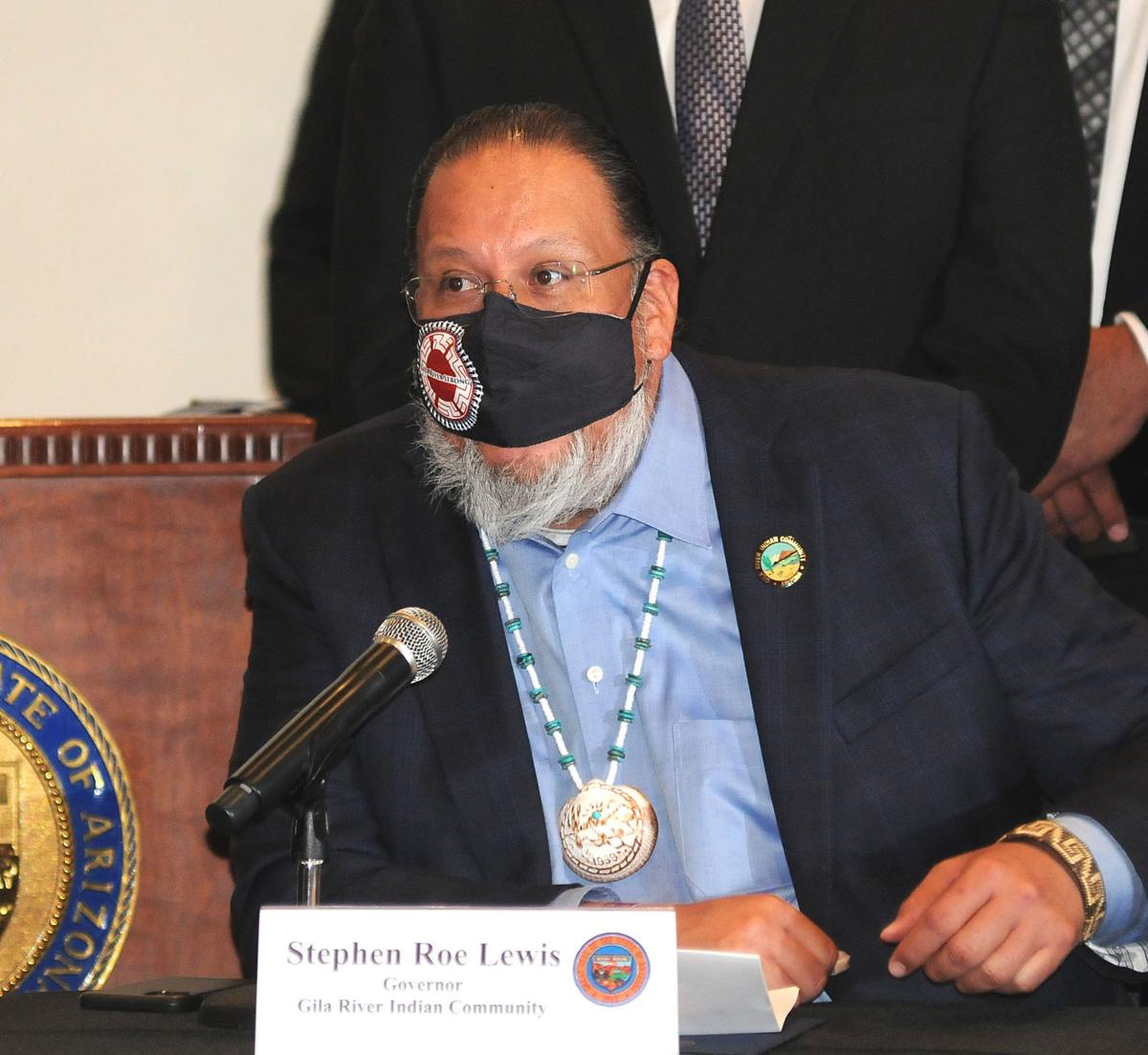 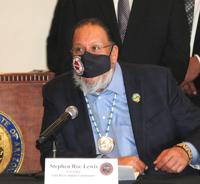 Stephen Rae Lewis, governor of the Gila River Indian Community, discusses Thursday some of the hurdles that had to be overcome before his tribe and others would agree to new gaming compacts with the state. (Capitol Media Services photo by Howard Fischer)

Surrounded by legislators, Gov. Doug Ducey on Thursday explains how he believes the benefits of the new tribal gaming compacts being signed outweigh any drawbacks. (Capitol Media Services photo by Howard Fischer)

Stephen Rae Lewis, governor of the Gila River Indian Community, discusses Thursday some of the hurdles that had to be overcome before his tribe and others would agree to new gaming compacts with the state. (Capitol Media Services photo by Howard Fischer)

PHOENIX — Arizona tribes are going to get at least four new casinos — and possibly more after another decade — along with more slot machines, more games of chance and the right to take wagers on a whole new category of professional and amateur sporting events.

One of the new casinos will be on the Gila River Indian Community between Casa Grande and Chandler.

The compacts signed Thursday by tribal leaders and Gov. Doug Ducey show there could be at least an additional nearly 6,300 video gaming terminals allowed in the state to attract Arizonans to reservation casinos. That is on top of the 13,640 the state Gaming Department says are in operation.

There actually already are close to 20,500 already authorized, with the balance not yet in use.

The deal allows for an automatic increase every two years of another approximately 570 devices. And the tribes that cannot use them, whether due to lack of need or they are too remote to attract gamblers, can make money by transferring them to casinos in more urban areas.

What the state is getting in return is a share of the profits.

For the most recent fiscal year the tribes reported gross gaming revenues of more than $2 billion. That's the difference between gaming wins and losses, but before deducting costs and expenses.

Of that, they contributed $102 million to the state. Half goes to education, a quarter to trauma and emergency services, and the balance split among wildlife conservation and tourism.

Cities got another $13 million.

There are no estimates of how much that might increase with all the new forms of gaming and the new casinos and machines.

But the state is getting something else in the deal: the same right as tribes to conduct wagering on sporting events and fantasy sports. Legislation also approved by the governor on Thursday will allow each sports franchise to take wagers on any and all sporting events both within their facilities as well as at remote sites within a quarter mile.

Such off-reservation gaming is precluded under the terms of the existing pact approved by voters in 2002. Supporters said the state's share of this could generate more than $100 million a year.

At a signing ceremony Thursday, the governor said negotiations have been going on now for five years as both the tribes and the state realized that those original compacts, good for up to 20 years, were going to start expiring in early 2023.

"The tribal nations sought certainty in order to plan for the future,'' Ducey said.

“This is a historic day,” said Shope in a statement. “The legislation and the amended gaming compact will keep our state moving forward and benefit Arizonans of all walks of life. It will impact our tourism industry, generate millions in revenue, and expand job opportunities across Arizona."

GRIC Gov. Stephen Rae Lewis, who was one of the tribal leaders in the talks, said these were not simple negotiations. It started, he said, with the need to build trust between the tribes and the state.

"We argued before we agreed, and we fought before we found our middle ground,'' he said. "But here we are today, celebrating the most unique unicorn — I use that term in political life — a genuine win for us all.''

But Lewis acknowledged there was another hurdle: getting agreement among the tribes themselves.

Some of that relates to bad feelings after the Tohono O'odham Nation, based in Pima County, used a provision in the original gaming compact to construct a new casino near the Arizona Cardinals stadium at the western edge of Glendale, putting them in competition with Maricopa County tribes for gaming customers. Lewis, whose tribe was the most affected by the maneuver — and even filed suit in an unsuccessful effort to block it — said it took time to rebuild trust.

This time, however, aides to the governor promised that this new deal has no surprises about where new casinos can pop up. But it does clear the way for the Tohono O'odham to build yet another casino near Glendale, this one near Loop 303 and Northern Parkway.

The new pact also permits the Gila River Indian Community to open a fourth casino on reservation lands, though Lewis declined to provide specifics on where that might go. And the Navajo Nation will get to build a new casino just north of Flagstaff on Highway 89.

And there also will be a new casino in Tucson.

The new pact confirms that that the Pascua Yaqui tribe is being allowed to construct what would be its third casino, this one in the area east of Interstate 10 and south of West Grant Road. That first requires the land to be acquired in trust for the tribe and an act of Congress to make it eligible for gaming.

It's not just new video machines that will create more opportunities for people to win — or lose — money.

At least two more new casinos are contemplated: one on the Salt River-Pima Maricopa Indian Community and another on the Fort McDowell Yavapai Nation, but only if both tribes agree.

The number of casinos aside, the deal provides for each tribal casino to have at least 100 table games, whether for blackjack or poker — more in urban areas. That is a significant change: The Gaming Department reports that all 24 casinos together have a total of just 288 blackjack tables and 144 poker tables.

The Hopi, San Juan Southern Pauite and the Yavapai-Prescott tribes have yet to sign the compacts. The first two do not conduct gaming but instead can provide their allocation to others; the third operates Bucky's Casino and the Yavapai Gaming Center. There was no explanation from the governor's office about the reason.

What Ducey and tribal leaders inked Thursday is a long way from the first days of tribal gaming in 1991 when Linda Akers, then the U.S. Attorney for Arizona, sent FBI agents to five tribes to seize hundreds of gaming machines. She said the lack of a compact with the state made their activities illegal.

Fife Symington, governor at the time, was originally opposed to tribal gaming. But he eventually negotiated the legally necessary compacts.

In 2001, however, a federal judge concluded that slot machines, blackjack games and keno contests are illegal in Arizona, even for charities. That led to a measure being approved by voters in 2002 to specifically allow tribal gaming.

In it, tribes offered the state a share of the profits. In exchange the tribes would have the exclusive right to operate casino gaming, though certain forms of charity gambling would be allowed.

It was that election where Jane Hull, then governor, assured voters that the deal would not result in any new casinos in the Phoenix area.

It was only later discovered that a provision had been inserted allowing new casinos on any property a tribe acquired as a result of settling a claim with the federal government. And that applied solely to the Tohono O'odham Nation which had been compensated after a federal dam project flooded tribal property near Gila Bend.

Years of litigation involving the state and the city of Glendale all ended in favor of the tribe. And the city eventually cut a financial deal with the tribe, dropping its legal disputes in exchange for $25 million over the next two decades.

A similar deal was struck between the tribe and Glendale to clear the way for that new casino near Loop 303.

City officials said it includes a one-time $400,000 payment this year. Then, once gaming starts, the tribe will provide $1 million a year for 20 years, with an annual escalator of 2%.

PHOENIX — Gov. Doug Ducey and the two lawmakers who ushered through a new state gaming law are defending a provision that has the state effect…