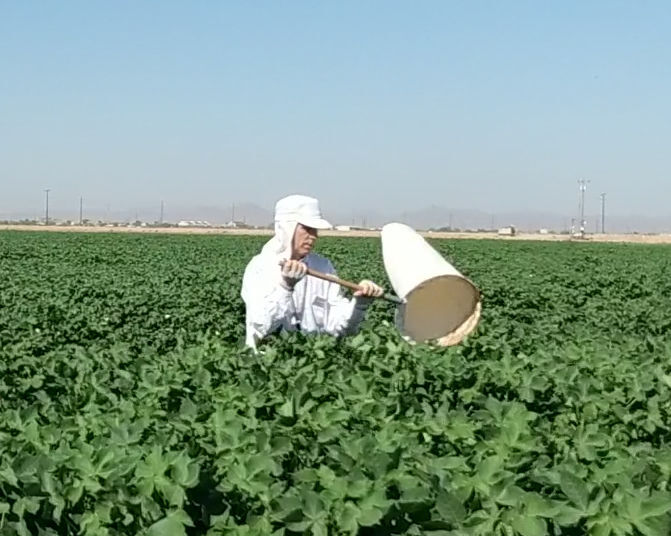 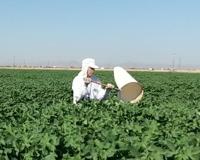 Researcher Peter Ellsworth combs through a field with a sweep net in search of bugs. 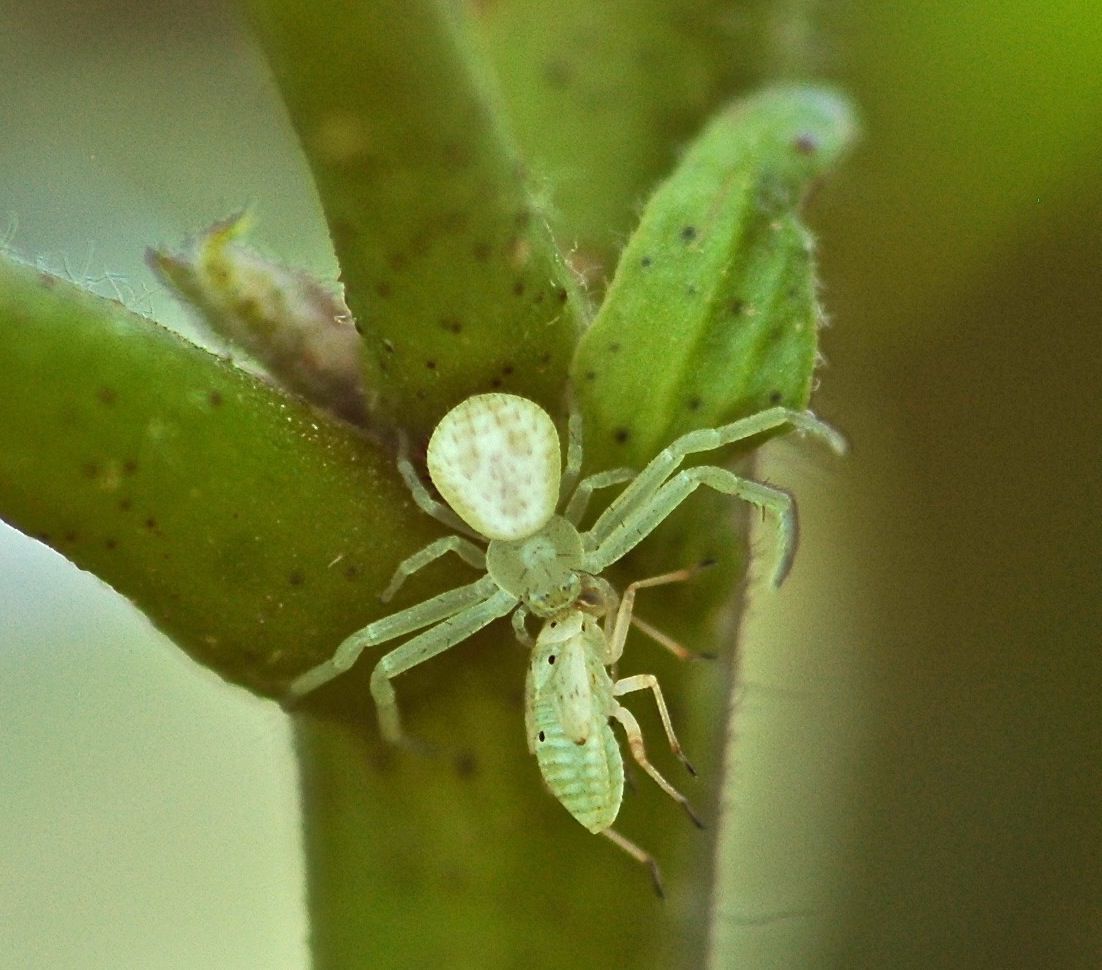 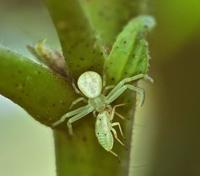 A predatory crab spider enjoys a meal of the pest lygus bug. 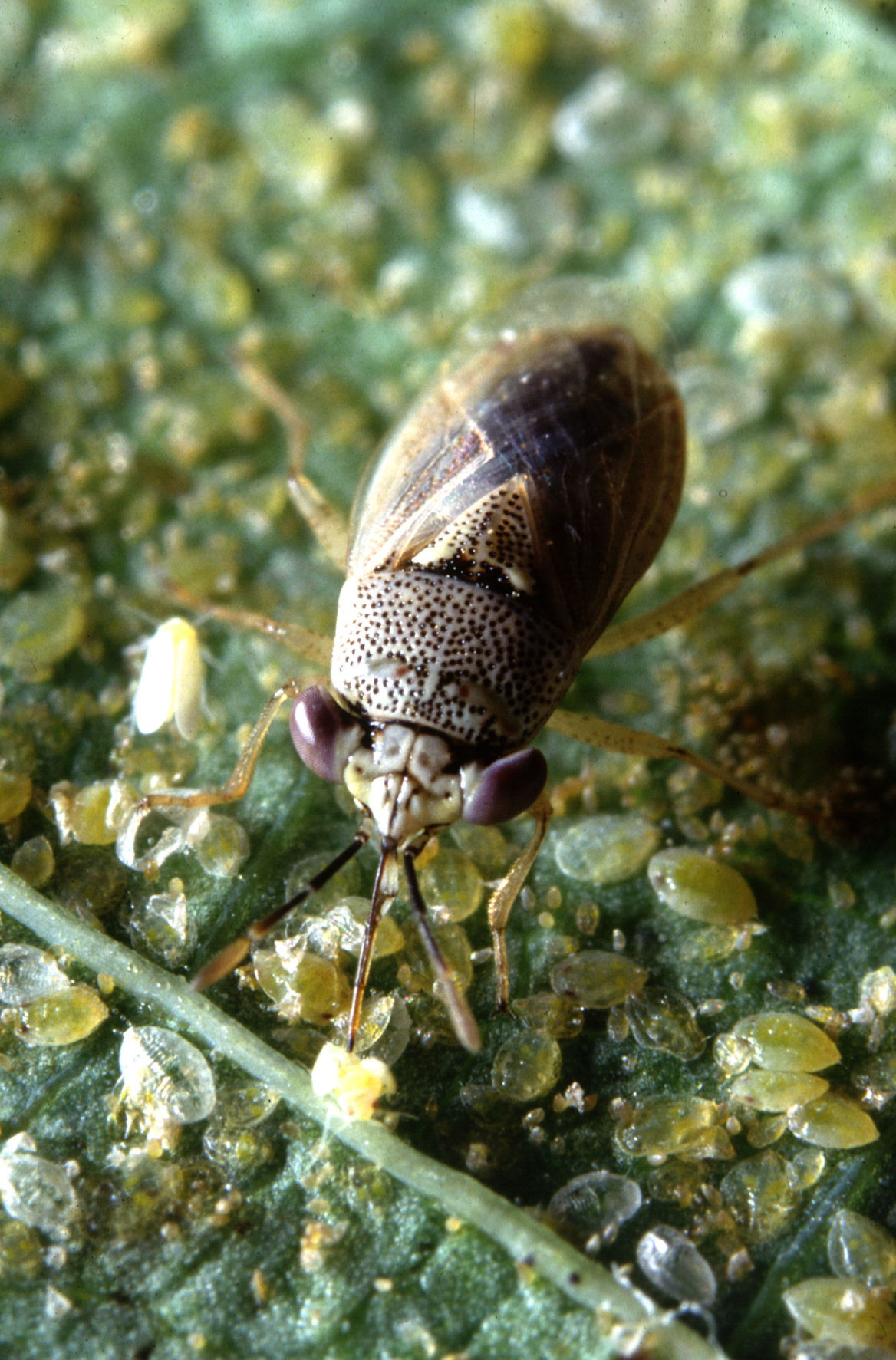 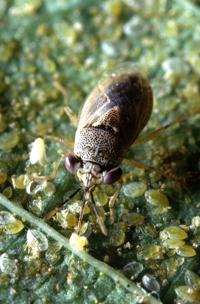 A closeup of a big-eyed bug, one of the natural predators found in a cotton field. 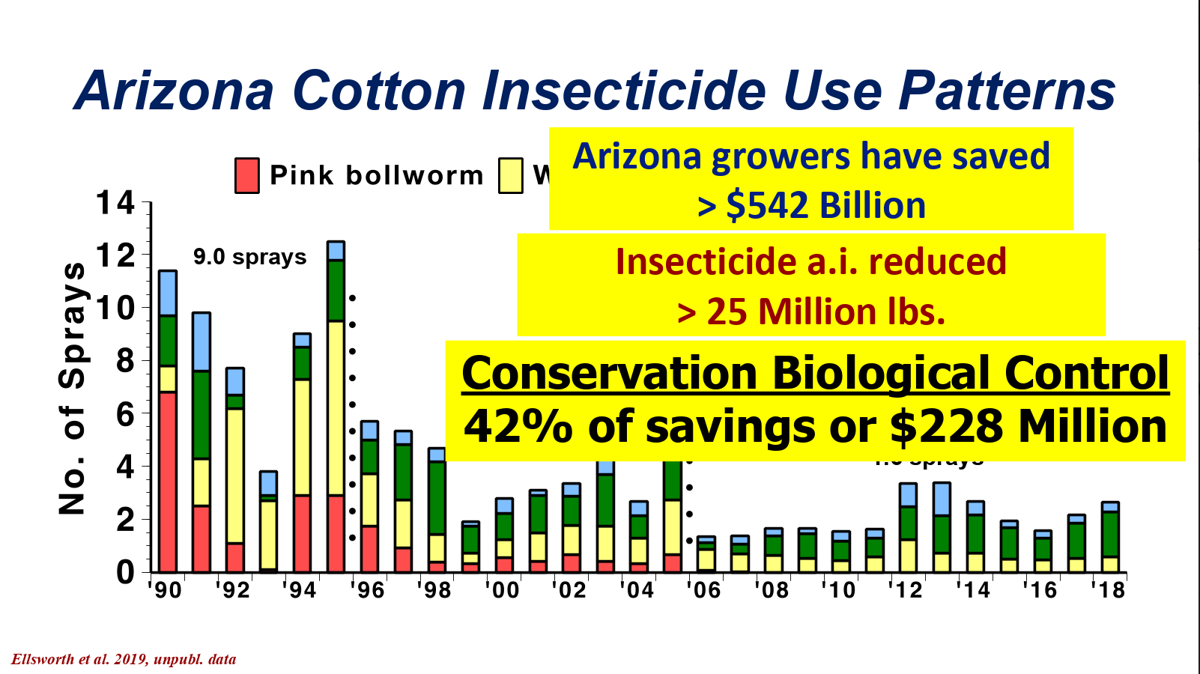 This graph shows how insecticide use in Arizona cotton has changed over the past 30 years. 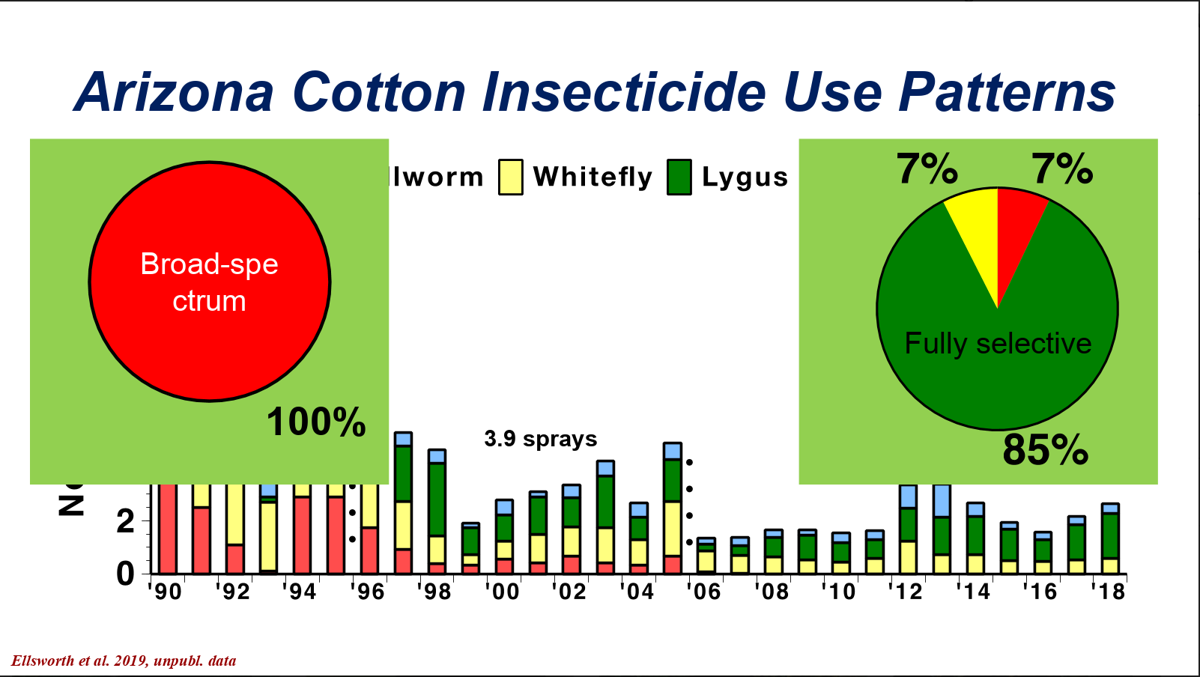 This chart shows how insecticides used in Arizona cotton growing have changed over the last 30 years.

Researcher Peter Ellsworth combs through a field with a sweep net in search of bugs.

A predatory crab spider enjoys a meal of the pest lygus bug.

A closeup of a big-eyed bug, one of the natural predators found in a cotton field.

This graph shows how insecticide use in Arizona cotton has changed over the past 30 years.

This chart shows how insecticides used in Arizona cotton growing have changed over the last 30 years.

MARICOPA — Driving past the cotton fields at the USDA Arid-Land Agricultural Research Center in Maricopa, commuters might spot a strange sight. Researchers, garbed in all white attire and a matching hat, wield large, butterfly-style nets as they systematically move through the crops.

They’re not after butterflies though. They trail their “sweep nets” across the top of cotton plants in search of insects, both pests and their natural predators.

“A cotton field is full of all kinds of insects,” said center director and research entomologist Steve Naranjo. “Most of them are not pest insects. ... The majority of insects that you actually find in the cotton field are beneficial insects, things like predators and parasitoids — things that actually will feed on the pest insects. We call them natural enemies, that’s sort of the common name for them.”

Naranjo is a bug expert, to put it simply. He has spent the last 33 years of his career at USDA in the fields of southern Arizona, catching and researching the tiny creatures that live in agricultural fields and sometimes wreak havoc on the crops.

Most recently, his work with his team has led to a breakthrough in how integrated pest management, or IPM, programs are utilized by growers and farmers. Historically, farmers would use a pest threshold to determine when and if they needed to spray insecticides.

“One of the fundamental concepts of IPM is that you should not make a treatment for an insect problem unless there is a need for that, and the way that you determine need is by sampling the insects in the field, so you know how many there are,” Naranjo said. “Then, through research, you figure out how many it takes to do damage to the crop and, by mathematics, you can figure out how many insects you need to see before you need to take an action. Usually that’s spraying insecticide.”

Spraying insecticides was a common practice when Naranjo first joined the agricultural center in the 1990s, and he says it did more harm than was really necessary.

“Basically, you put (insecticides) out there and they kill everything,” Naranjo said. “They don’t just kill the pests, they kill all the natural enemies, they kill the pollinators, they do everything.”

The initial pest threshold worked, but it meant that farmers were spraying insecticides upwards of nine to 13 times in one growing season. Even with the implementation of bug-specific insecticides, like ones that targeted whiteflies specifically, farmers were still losing money every season on spraying.

But in 2014, Naranjo and his team began working on a more environmentally friendly and cost effective way of dealing with pests: let the predators do their jobs.

“Through many, many years of research, we’ve come to understand what role these natural enemies play in controlling our pest insects,” Naranjo said. “What we’ve done is, we’ve taken that and distilled it down into a very simple concept of saying, ‘If the predator-to-prey ratio is above a certain level, then that’s your threshold.’”

This is where those nets come into play. Every season, researchers head out to the cotton fields and sweep their nets back and forth to catch all kinds of critters. Then, they begin the painstaking process of individually counting the bugs they’ve caught in their nets. Sometimes if they’re a bit busy, they’ll even freeze the insects until winter when there is more time to collect the data.

“For instance, we have an insect called the big-eyed bug — a very common predator that feeds on a lot of things,” explained Naranjo. “If we take 100 sweep nets and we find 1.5, on average, of this big-eyed bug to every one whitefly nymph, that means the whitefly population is actually under biological control because there’s sufficient numbers of this predator to suppress that pest population.”

Not all bug collection is as easy as waving a net around though. Naranjo says whiteflies can attach themselves onto plants, making it hard for them to be caught up in the nets. Instead, his team of researchers have an elaborate system of counting the fifth leaf down on every plant, turning that leaf over and examining it for bugs.

“If you see three whitefly adults on that leaf, it’s considered infested. If you see less than three, it’s considered not infested, so it’s a one or a zero,” Naranjo said. “You do that 30 times, and then you say, what percentage of times did I see an infested leaf? If it’s 50%, then that’s the threshold. It’s really simple.”

Simple to an entomologist, maybe. This sweeping process was already partially used by growers, but when predators are factored in, researchers have found that the need for pesticides is a lot lower than originally thought. In fact, Naranjo says that today, growers spray an average of two times per season compared to the original nine to 13.

To date, Arizona growers have saved an estimated $542 billion on insecticides and simultaneously reduced the amount of pesticides used by 25 million pounds.

“We’re replacing this pest-centric threshold with a threshold that’s based on not only how many pest insects that you have in the field, but how many beneficial insects you may have that could potentially feed on those,” Naranjo said. “You’d think that it’s simple enough that it would have been done 100 times already, but it really hasn’t — it’s a pretty novel thing.”

The new thresholds Naranjo and his team have created are specific to cotton fields and identify six key predators that are representative of around 30 natural enemies normally found in a field. A farmer would only have to search for those six if they wanted to find their predator threshold, and then add in their pest numbers to determine the predator-to-prey ratio.

This research is specific to cotton field pest dynamics but, now that the foundations have been laid, the process is more easily transferable. Naranjo said the ultimate goal would be the ability to manage a field’s ecology so effectively that no insecticide is needed at all. This way, a farmer would have the least out-of-pocket expenses possible, and the bugs are happy too.

His work can be seen as revolutionary in an industry that hasn’t seen much change in the way pesticides are viewed in the last few decades. He gave the example of applying for a grant when their numbers for pesticide use in fields had already dwindled.

“The reviewers came back on that grant and said, ‘Well, these are great ideas, but what do you hope to achieve? You’re hardly using insecticides at all, why would we want to fund this research?’” Naranjo said laughing. “We kind of said, ‘Well, maybe we could eliminate all insecticide use, wouldn’t that be something that you’d want to see?’”

They were funded the following year using that argument, but it left a lasting impression on Naranjo.

“There’s this kind of mentality that you can get insecticide use really low, and then you should just be happy with that and not try to improve on that,” Naranjo added. “But I would be happy if we didn’t have to use insecticides at all.”

This research into pest control is just one aspect of the multi-faceted IPM defense against pests in the field. Other methods include using sex pheromones to confuse bugs and keep them from mating, and genetically modifying the crops to become more pest resistant, such as in the case of the cotton grown at the center. The cotton contains Bacillus thuringiensis, a bacteria that kills certain types of bugs that ingest it.

The research center’s main focus is how to benefit the farmers and the growing community in the best way possible. So while Naranjo works with bugs, his goal is also to help the farmers’ profit margins.

“We’re trying to make the plants more productive and cheaper to produce and have higher yields,” Naranjo said. “That’s kind of what our mission is — to make farming more economically efficient so that we can produce more on less land as we continue to grow as a population.”

On a personal note though, Naranjo says his time working on this project in the last six years has been the most rewarding of his entire career with USDA.

CASA GRANDE — Like many other industries these days, cotton is fighting its way back from a …

CASA GRANDE — A summer of prolonged record heat could have been disastrous to cotton. But th…

With COVID-19, it is unclear of its impact in the Pinal County's livestock industry

The livestock industry in Pinal County contributes to millions of dollars a year annually, a…