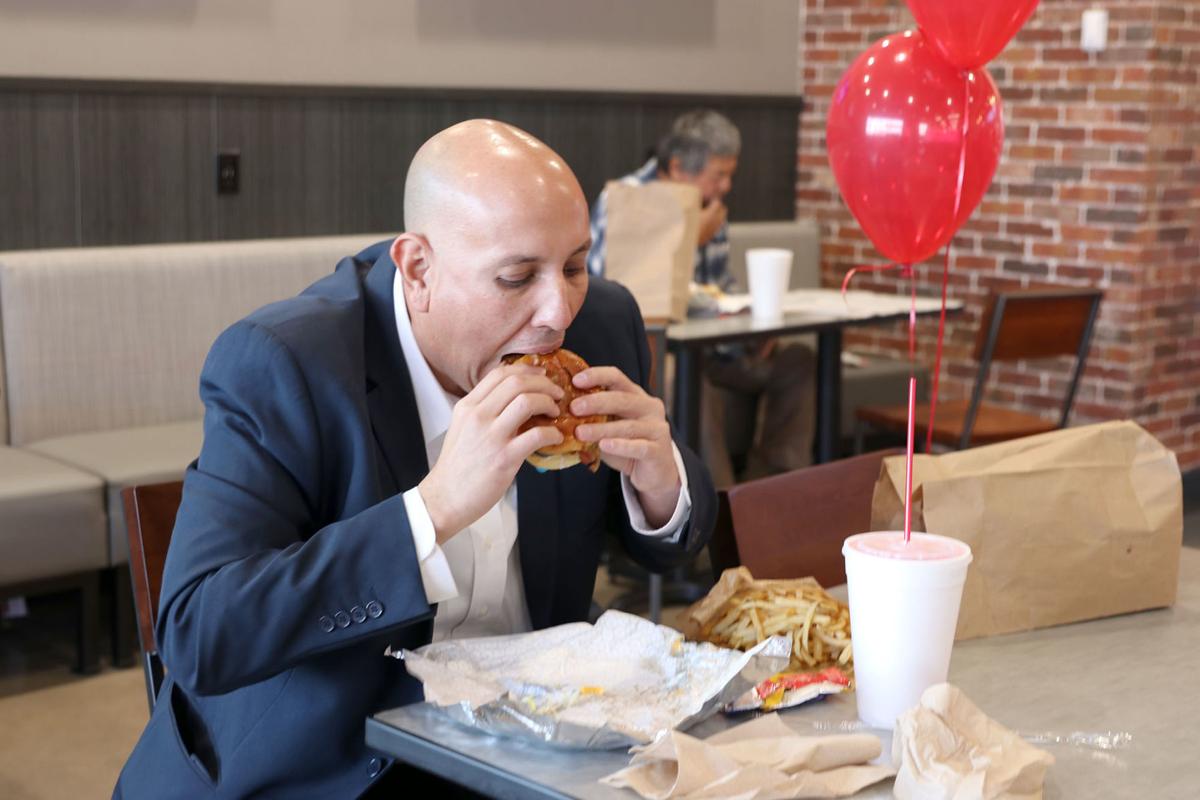 Eloy Mayor Micah Powell takes a big bite of the Smoked Burger from Trucker Burger on Jan. 20 in Eloy. 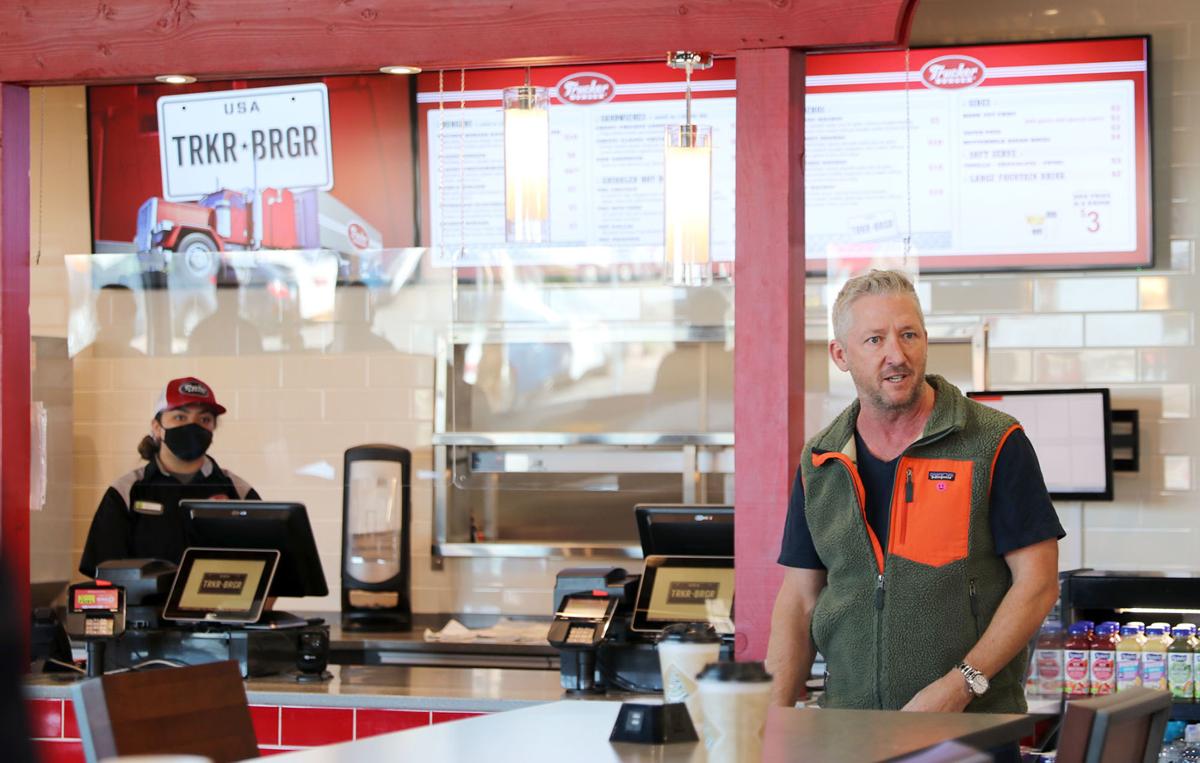 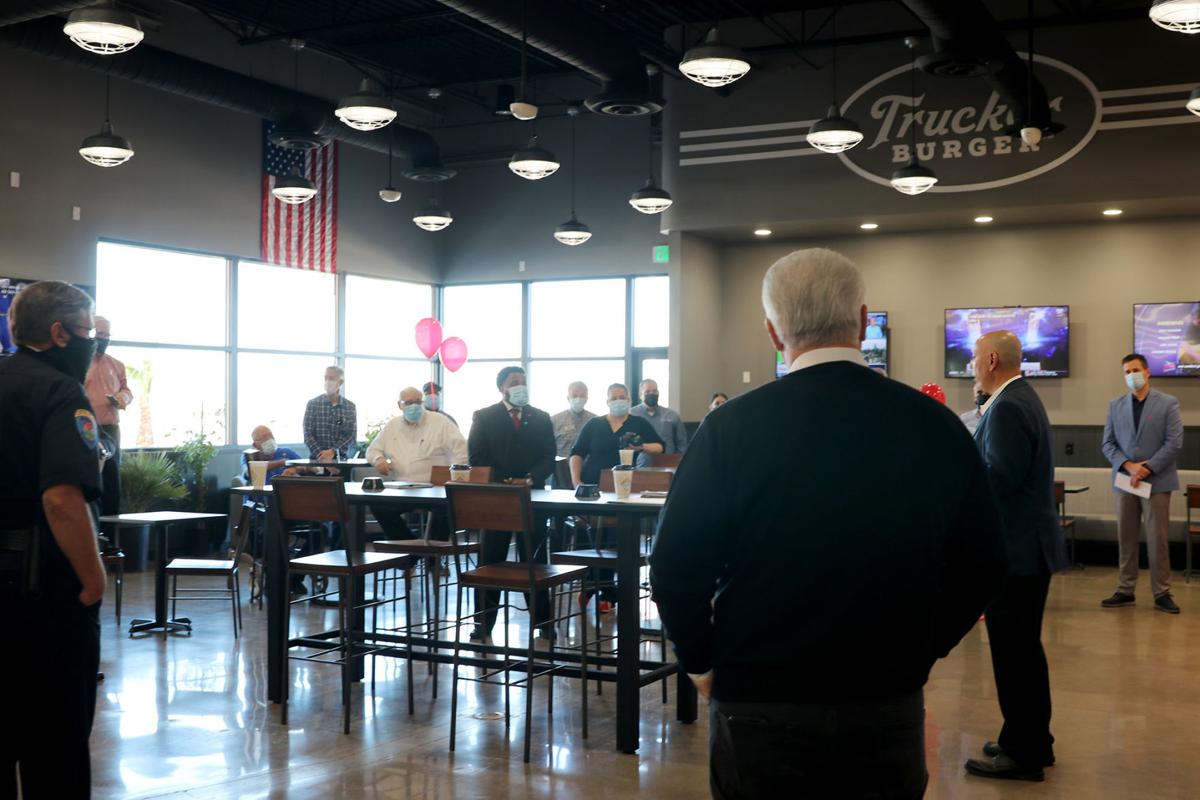 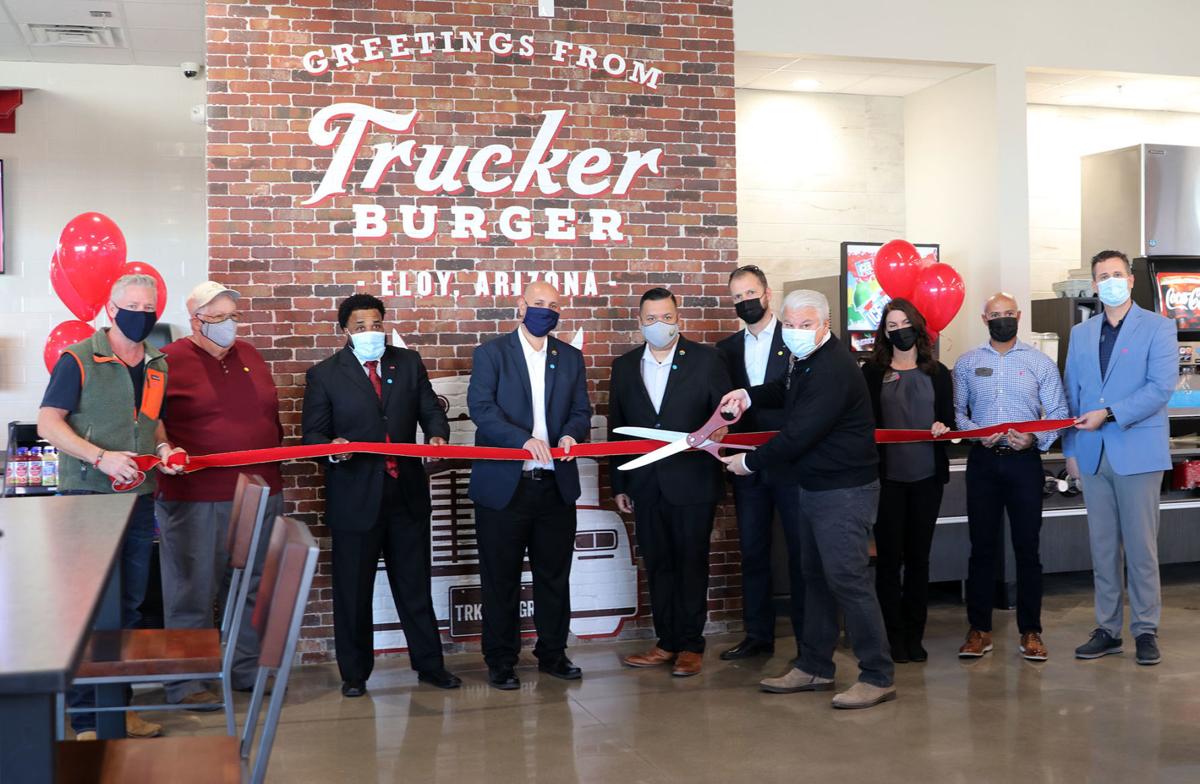 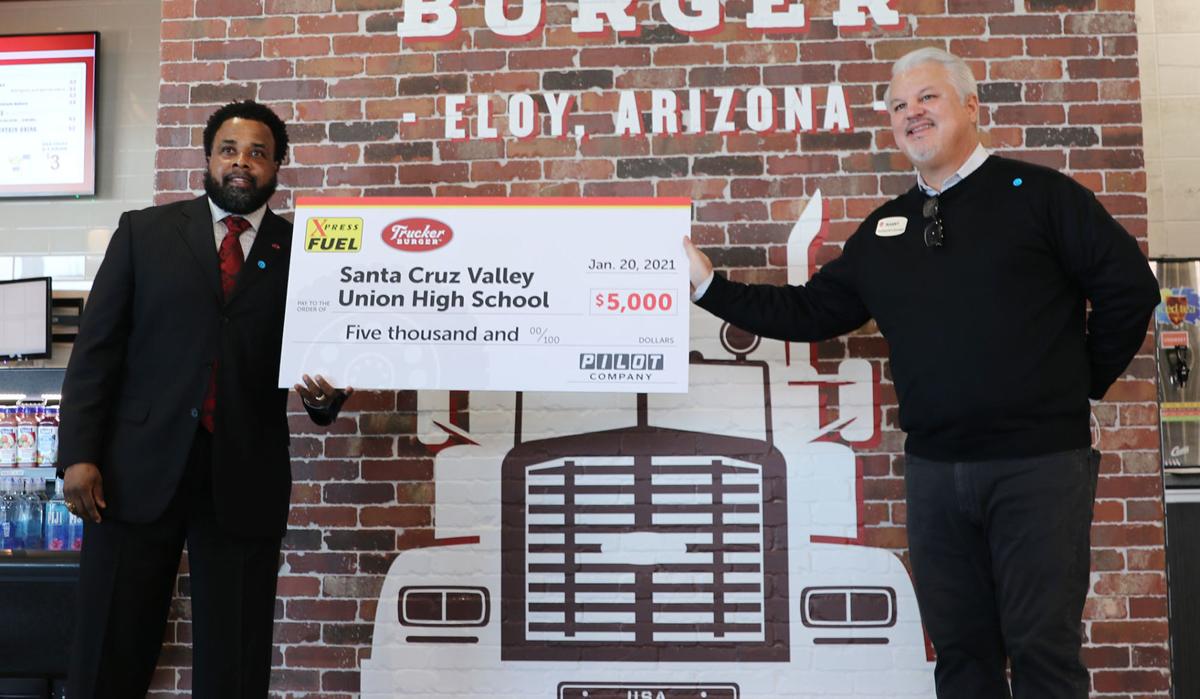 Eloy Mayor Micah Powell takes a big bite of the Smoked Burger from Trucker Burger on Jan. 20 in Eloy.

ELOY — Where can you find a gourmet burger at a truck stop? Only in Eloy, which is now home to the first ever Trucker Burger.

In a collaboration between celebrity chef and restaurant owner Tim Love and the One9Fuel Network, Trucker Burger offers a gourmet menu of diner classics.

“We’re trying to design a place for Eloy to come hang out,” Love said. “Not (quickly) go through, and really have a sense of community. We’re going to try to continue to improve the space. I want to improve the lighting and have tables put outside and hang out outside. It’s beautiful here most of the time.”

The restaurant is located inside the newly built Xpress Fuel truck stop at Toltec and Houser roads and was inspired by those who are constantly driving through America.

Trucker Burger provides a vintage dine-in atmosphere for those on the go, bringing new food concepts to the interstate by focusing on the flavors and specialty ingredients that represent the region.

“It’s always a pleasure for me to teach and coach,” Love said. “Grilling a burger is not hard to do, but grilling a great burger is and so I was teaching them when and why. Why are we flipping the burger now, not because it’s cooked all the way through on one side but what happens to meat, what does it look like. When you give them the why, they’re like, ‘Oh, man this is cool.’ A lot of people, especially in fast-food restaurants, teach how to do it, I like to teach why we do it.”

The restaurant features six televisions along the wall, as Love is hoping to create a place where people can come out to watch a game and grab something to eat.

Love is the chef and owner of Love Management Inc., which includes many eateries throughout Texas such as the Woodshed Smokehouse, Love Shack and the White Elephant Saloon.

Love has appeared on countless national television shows such as “Good Morning America” and “Iron Chef America” on the Food Network.

Some unique menu items include the Diablo Burger, which is a beef patty, poblano chile peppers, queso and caramelized onions on a flour tortilla. Brisket Nachos and The Phoenix hot dog, which is very similar to a Sonoran dog, as it is wrapped in bacon.

“We’re really excited that we chose Eloy to be our first Trucker Burger,” Pilot Company Senior Director of Food and Beverage Jamie King said. “We’re really fortunate for the last several years to work with Tim Love, we’ve worked on several projects and this is a combination of a lot of efforts.”

All of the Trucker Burger food is made from scratch and uses fresh ingredients, which is unusual for a fast-food place.

“You don’t find that at a truck stop or even in Eloy or Casa Grande,” City Councilman Dan Snyder said. “There’s a lot of health-conscious people.”

Mayor Micah Powell and Vice Mayor Andrew Rodriguez chowed down on a burger following the ribbon cutting ceremony on Wednesday morning and were blown away by how delicious the food was.

“This is good stuff,” Powell said. “This is good quality food; this is something that you would see anywhere but here. For the Pilot people to bring in the Trucker Burger, the first one in the whole nation, and test it out with us, that speaks volumes and I really hope the city and the residents get behind this and support this.”

Rodriguez also emphasized the fact that it’s all fresh and everything is done on site. While Powell commented about the difference the brioche bun makes, Rodriguez was hooked on the savory Applewood smoked bacon.

“It’s something different from all the restaurants that we have in town,” Rodriguez said. “I don’t want to say this but it’s higher quality than the other restaurants we have in town, no disrespect but this a little bit better. They say their onion rings are the ones to go to. They have other options they have chicken and fish.”

Trucker Burger is located on Toltec Road right off of Interstate 10.