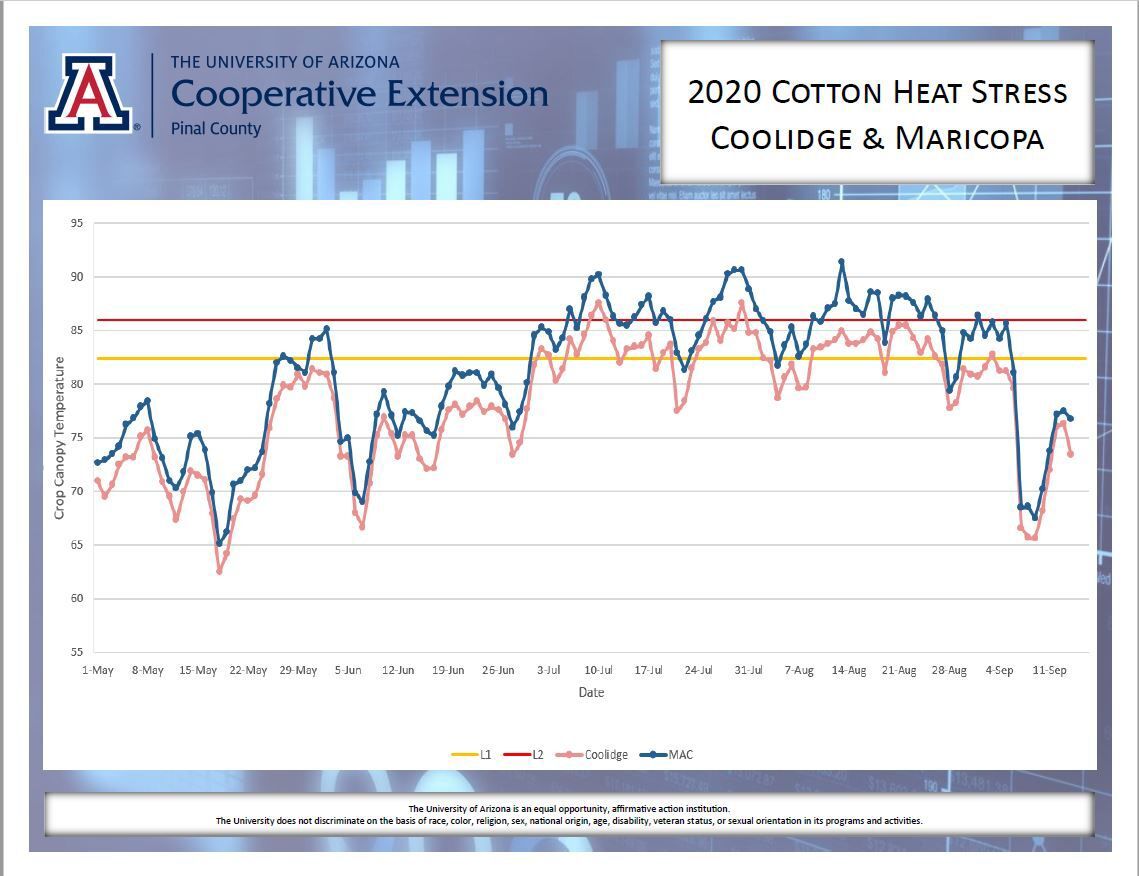 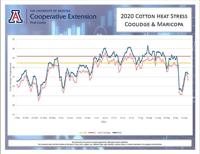 This graph shows heat stress levels with data collected from University of Arizona weather stations in Maricopa (blue) and Coolidge (pink). The straight lines indicate Level 1 (yellow) and Level 2 (red) heat stress and the variable lines show when each station reached those levels. 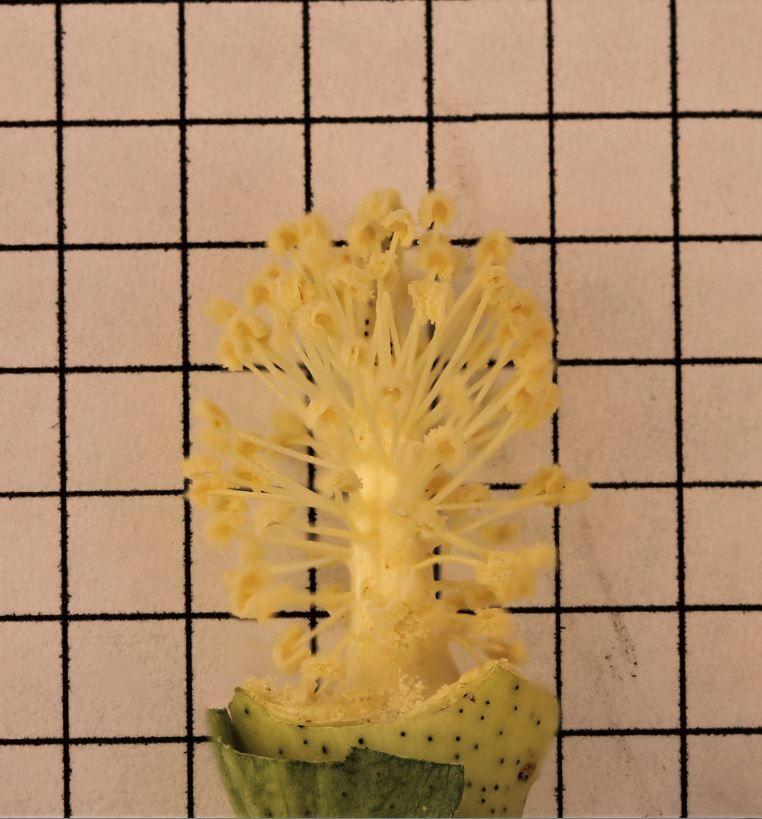 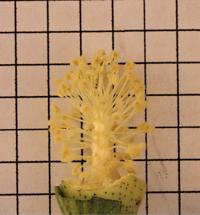 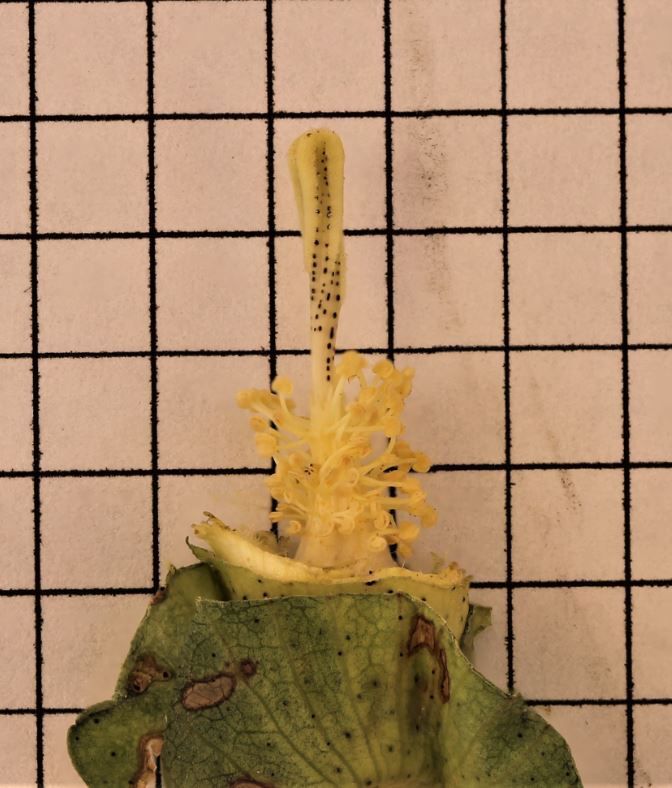 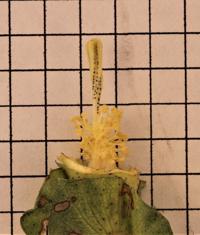 This graph shows heat stress levels with data collected from University of Arizona weather stations in Maricopa (blue) and Coolidge (pink). The straight lines indicate Level 1 (yellow) and Level 2 (red) heat stress and the variable lines show when each station reached those levels.

CASA GRANDE — A summer of prolonged record heat could have been disastrous to cotton. But thanks to low humidity in another mild monsoon season, the crop is looking pretty good.

“We had a lot of heat this summer … but the cotton crop wasn’t necessarily negatively impacted all that much,” Blase Evancho, assistant in extension for field crops in Pinal County, told PinalCentral.

This summer outdid itself for a spot in the record books, with at least 50 days reaching 110 degrees or more.

“I’ve been out here for 40 years — we’ve always lived in Casa Grande — and I don’t remember summer ever being this hot,” Ollerton said. He said the cotton crop is in trouble when nighttime temperatures stay too hot, above 85 degrees.

“When the flower opens up in the morning, and the pollen is exposed, the heat will sterilize that pollen. You’ll get an under-developed boll,” Ollerton said.

Periods above Level 2 lead to increased three-to-five-day-old boll shed. But this year, heat stress didn’t occur until later in the season after much of the area’s crops had already passed full bloom, reducing the incidence of boll shed, Evancho said. Coolidge saw very few days of Level 2 heat stress and little to no boll shed in the field.

Heat stress is more than just temperature, it’s also calculated with vapor pressure and humidity. Danger comes from high humidity overnight combined with high heat. If there’s overnight cloud cover to retain heat, it can cause Level 2 stress. No matter the daytime temperature, “nighttime is really when the crop can become impacted,” Evancho said. Fortunately, humidity wasn’t a big issue this summer.

“During our traditional monsoon season starting around the Fourth of July, we usually get a storm, and that usually coincides with some heat stress on our crop. This year we had no humidity over that holiday and it really didn’t start picking up until mid to late July,” Evancho said. The result is what looks to be a good cotton crop.

“I think our yield numbers are going to be really good this year. The heat stress was late so most of our crop already had its flowering completed. The bottom and middle of the crop, I think, is really going to yield well. There was the potential for some boll shed later in the season from heat stress, but I don’t think it’s going to do too much to impact our yield. And then we’re going to finish up really strong with warm dry temperatures as you’re seeing now,” Evancho said.

For a closer look at the heat stress local crops endured this summer, search online for AZMET to visit the University of Arizona’s Arizona Meteorological Network. Click on “Crop Reports” in the upper-right corner. On the next page, click on “Cotton,” and on the next page click on “Heat Stress Reports.”

Ollerton said it’s still a little warmer for this time of the year than he’d like it to be, “but you know what? I’ll take it, it’s helping us.”