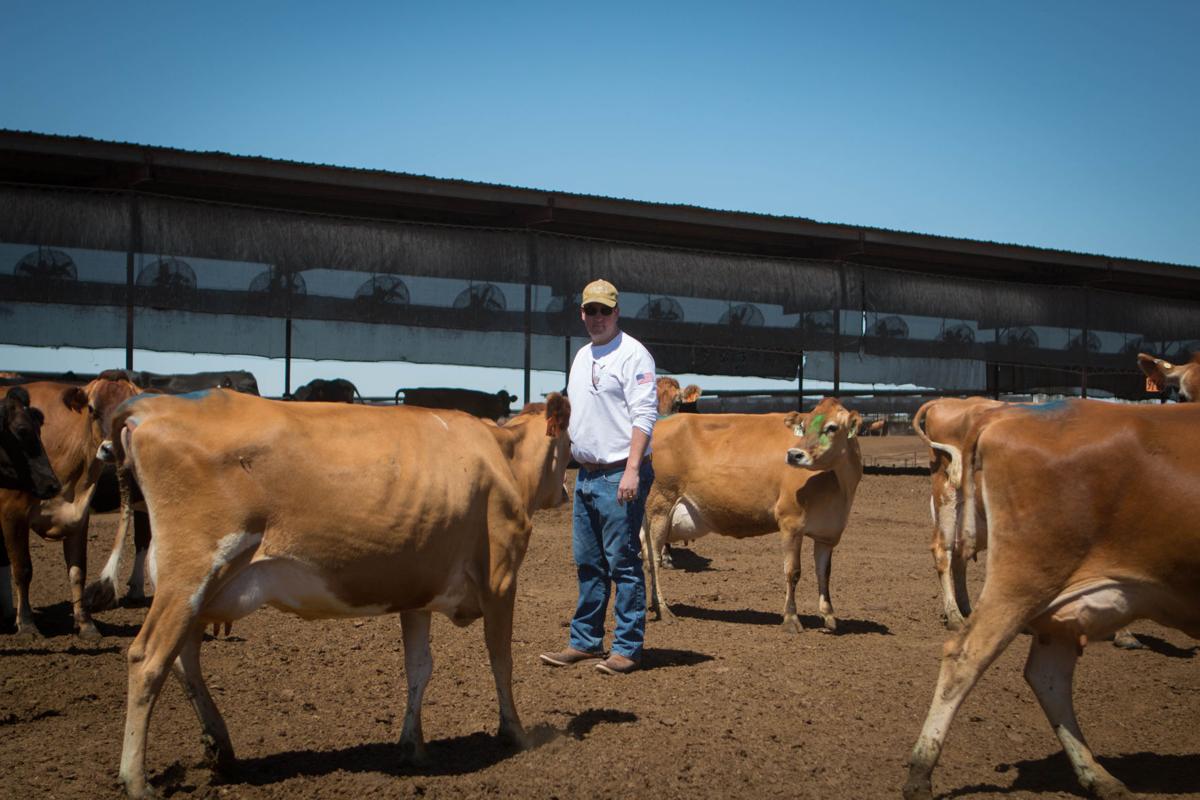 At top, trucks bring in 150 to 200 truckloads of local milk from farms to Boyle Dairy for testing. At top second, Santos Sanchez Reoz works equipment at Boyle Dairy. At top third, the United Dairymen of Arizona co-op produces a variety of products for consumers. Above, dairyman Jim Boyle said the industry has not been profitable since 2014. 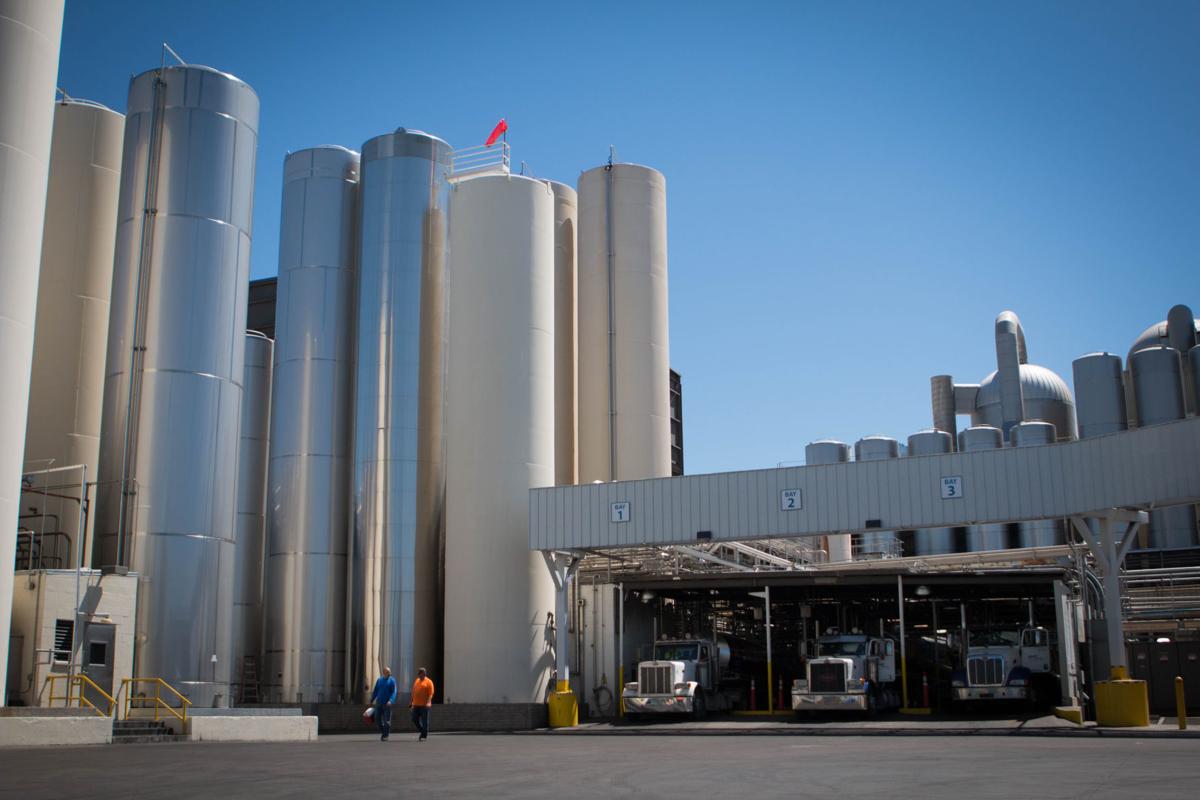 Every day trucks bring in 150-200 truckloads of local milk from the farms to be tested. After, it is manufactured into butter, cheese or powdered product. (Photo by Delia Johnson/Cronkite News) 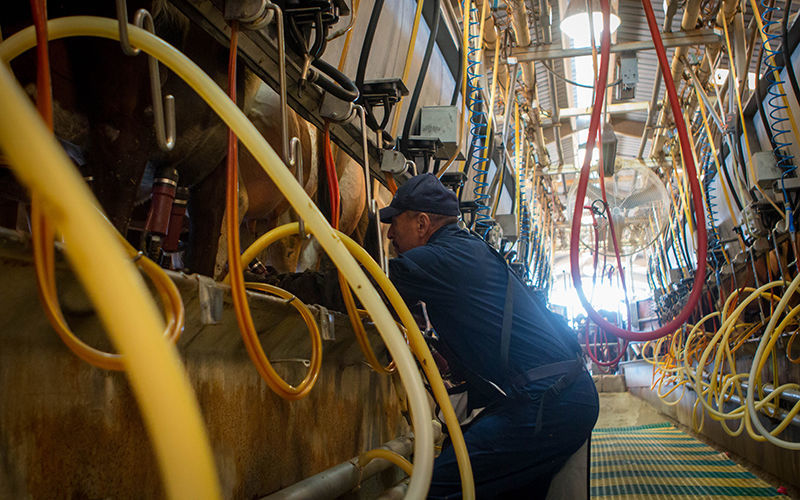 The Boyle Dairy is home to mostly Jersey cows, which produce about eight gallons of milk a day. While smaller than classic Holstein cows, Jersey cows produce milk that is higher in fat and protein. (Photo by Delia Johnson/Cronkite News) (Pictured is Santos Sanchez Reoz) 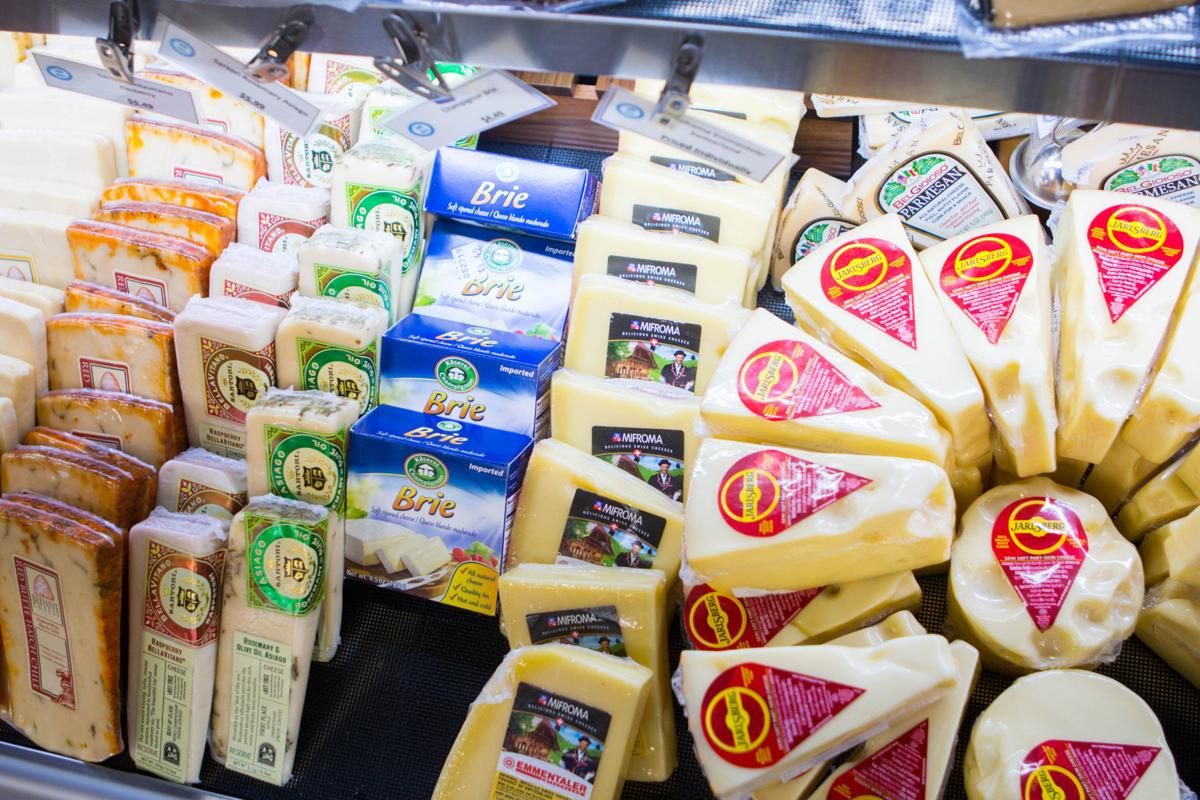 The UDA processing plant also includes a small store for consumers to buy the product. They produce a variety of dairy products such as milk, cheeses and protein powders. (Photo by Delia Johnson/Cronkite News) 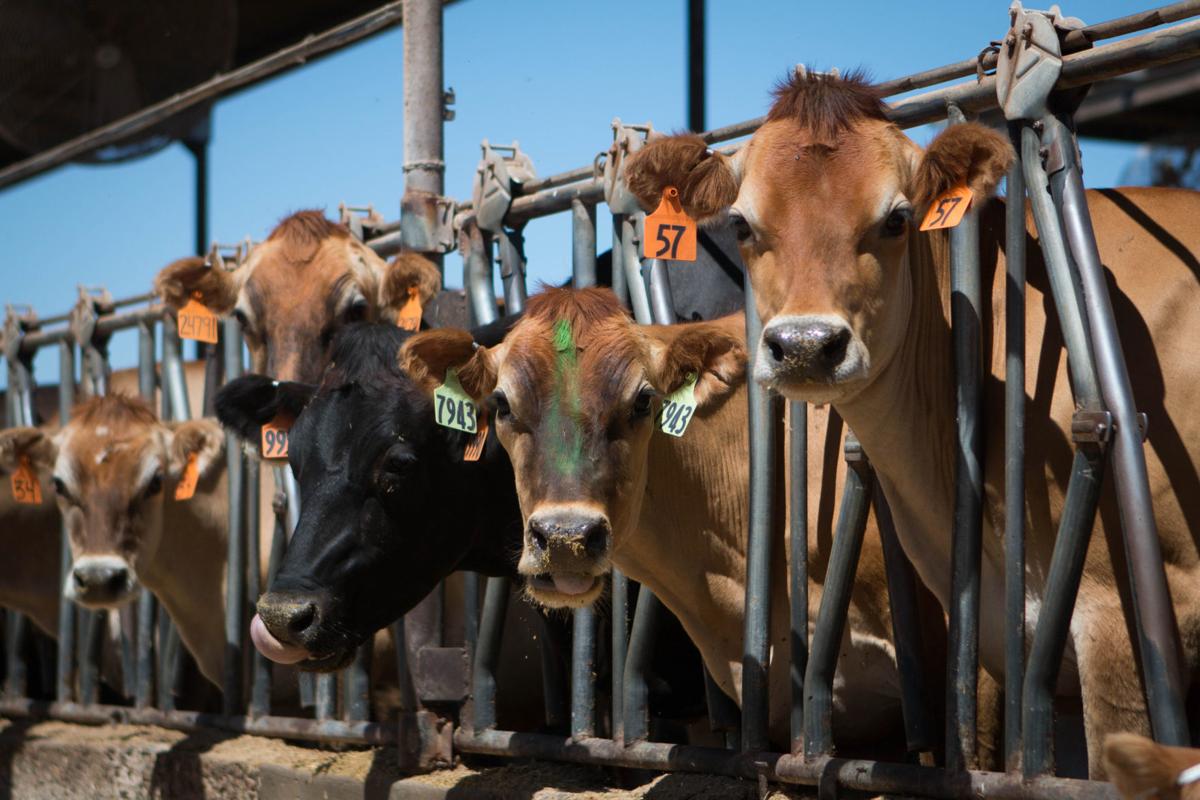 These cows at the family-owned Boyle Dairy in Mesa are among about 1,400 on 120 acres. The Boyle Dairy is one of about 80 dairy farms in Arizona, a low number compared to other states. 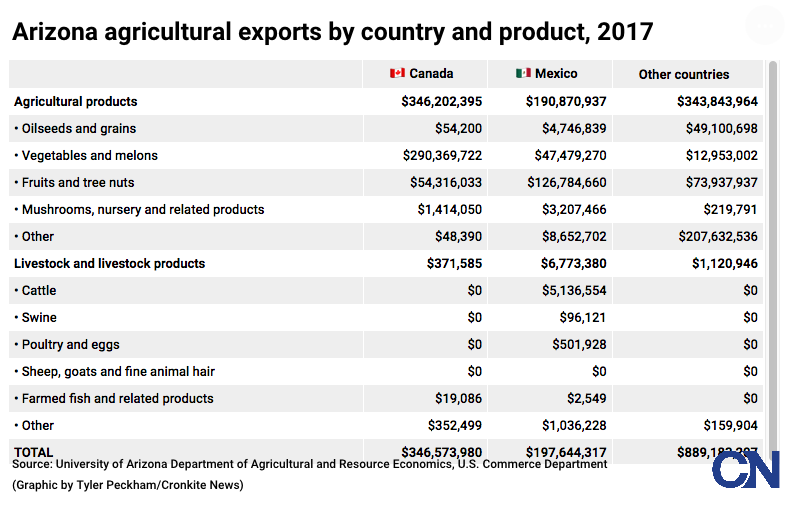 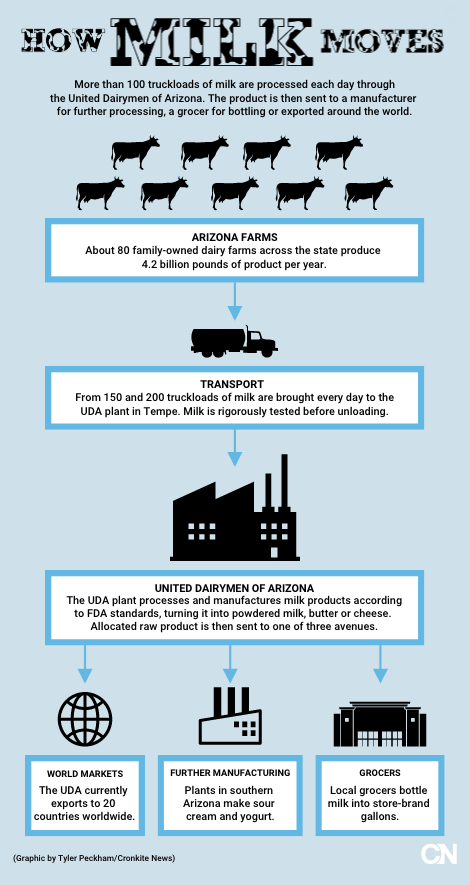 At top, trucks bring in 150 to 200 truckloads of local milk from farms to Boyle Dairy for testing. At top second, Santos Sanchez Reoz works equipment at Boyle Dairy. At top third, the United Dairymen of Arizona co-op produces a variety of products for consumers. Above, dairyman Jim Boyle said the industry has not been profitable since 2014.

The Boyle Dairy is home to mostly Jersey cows, which produce about eight gallons of milk a day. While smaller than classic Holstein cows, Jersey cows produce milk that is higher in fat and protein. (Photo by Delia Johnson/Cronkite News) (Pictured is Santos Sanchez Reoz)

MESA — Dairy farmers in Arizona are dealing with challenges brought by tariffs and competition from alternative-milk products, such as almond and soy milk, as well as persistent drought across the Southwest. But they’re forming new partnerships and adjusting their agricultural practices to stay competitive in the rapidly evolving world market.

One such farmer is Jim Boyle Jr., 44, whose family has been dairy farming in Arizona for five generations. Boyle’s father bought a large farm near Mesa in the 1970s. Boyle has since expanded operations to Casa Grande.

Since Boyle’s father started the Mesa farm, the family has partnered with the United Dairymen of Arizona, a co-op that processes, manufactures and markets Arizona dairy products in and outside the United States. Roxy Helman, communications manager for the UDA, said the system “helps the farmers focus on making the best product possible, while we do the work for sale.”

Every day, the UDA plant in Tempe receives fluid milk from 74 family farms across Arizona, amounting to about 150 to 200 truckloads of milk, each holding 6,000 gallons of milk and stamped with the words “Undeniably Dairy.” Before the milk is offloaded, it’s tested to make sure it meets federal standards for temperature and the presence of antibiotics, among other things.

The milk then travels through the plant to become butter, cheese or powdered milk. Some fluid milk is sold to local grocers for gallon bottling or sent to other dairy processing plants, where it becomes yogurt or sour cream.

With so much milk coming in, the UDA has enough to export to 20 countries. According to Boyle, the importing countries “tend to be protein-short countries,” including Algeria, Indonesia and Saudi Arabia. American dairy products, he said, “are seen as a great source of protein.”

What’s sold overseas is mostly powdered milk, which is popular in Asia and North Africa. Because of its longer shelf life, Boyle said, it can travel long distances while retaining essential vitamins and nutrients.

The Tempe plant also makes butter and cheese, but these travel shorter distances and are sold mostly to Mexico, Arizona’s largest international trade partner. Canada is third, after China, according to Gov. Doug Ducey’s office.

Data collected by the University of Arizona shows that 61 percent of Arizona’s agricultural products in 2016 were purchased by Mexico and Canada, the United States’ partners in NAFTA and its proposed replacement, the U.S.-Canada-Mexico Agreement, which awaits congressional approval. About 30 percent of the dairy that leaves Arizona goes to Mexico.

“We have a plentiful supply,” said Paul Brierley, executive director of the University of Arizona Yuma Center of Excellence for Desert Agriculture. “Why not share it with the world?”

The world’s dairy industry is mostly concentrated in three areas: Europe and New Zealand, which have been producing dairy products for centuries, and the United States, which is relatively new to the business of selling around the world.

“The U.S. really didn’t get into this game until about 12 years ago, so we are behind.” Boyle said. “A lot of countries, and companies in countries, kind of doubted our commitment to it; we in Arizona have treated it very seriously.”

The competition ratcheted up after President Donald Trump enacted export tariffs on steel and aluminum in March 2018 and, in return, Mexico started taxing American cheese, greatly affecting Arizona farmers. New Zealand has taken advantage of this conflict, creating a trade agreement with Mexico that has resulted in increasing sales and threatens to shut the U.S. out of the Mexican market.

“You give up that market share, and then it’s really hard to get it back,” Boyle said.

“Tariffs disrupt the market,” he said. “Other countries retaliate, which makes our products more expensive, and then we aren’t competitive anymore.”

To counter Arizona’s reduced share of the Mexican market, the UDA looked for an alternative inside the United States. Three years ago, it began negotiations with Fairlife, a producer of ultra-filtered milk, which has less natural sugar and lactose and more protein. The company has a single plant in Illinois, but on April 9, it broke ground on a plant in Goodyear, set to open in 2020. Fairlife milk sells for a premium at grocery stores. In partnering with Fairlife, UDA dairymen will be given top dollar to produce milk that meets the company’s higher standards of animal care and product quality.

“It is essential that the new facility be built in an area where dairy farms are willing and able to follow Fairlife’s responsible animal care and sustainable farming practices while producing the highest quality milk,” Tim Doelman, Fairlife’s chief operating officer, said in a statement. “Not only are there amazing dairy farmers in and around Goodyear, its location enables competitive domestic and international production.”

The weather in Arizona is especially good for dairy production, allowing farmers to get more milk out of their cows and have more breeding opportunities than in colder states. Arizona dairymen also can produce feed year-round.

“The environment here creates an incredibly long growing season, so the main crops that are grown here are suited well for dairy farms — alfalfa, corn for silage,” Boyle said.

The industry, however, is beginning to feel the effects of the drought that has persisted for two decades.

“We pay a lot of attention to the drought,” Boyle said. “Our main farm is in Pinal County, which is on the lowest tier of water usage, so we watch it very carefully.”

Irrigation districts have had to cut back on water deliveries to help maintain the level of Lake Mead, which supplies at least 40 percent of Arizona’s water.

As a result, Boyle said, “I’m not going to be able to farm all of my acres. There’s about 100 acres that are going to need to be left fallow this year, which is going to drive the price of feed up because there will be less forages grown in Arizona this year.”

Area farmers and farmer organizations contacted by Cronkite News all said the drought has reduced the product available for export this year. Eric Wilkey, president of Arizona Grain, said, “we all have to use water to produce crops. Exporting water is part of exporting crops.”

Despite the challenges, Helman, of the UDA, said farmers in the co-op produced 4.2 billion pounds of milk and derivatives last year and expects to produce a similar amount in 2019. UDA farmers produce 80 percent of the milk produced in the state.

Boyle said, “we have multigenerational families that are a part of the co-op and we’ve all invested a lot of money into it. That plant is owned by us, the individual dairymen. When the UDA does well, all the profits come back to the dairymen. If it doesn’t do well, we have to take money out of our pocket and put it into the plant.”