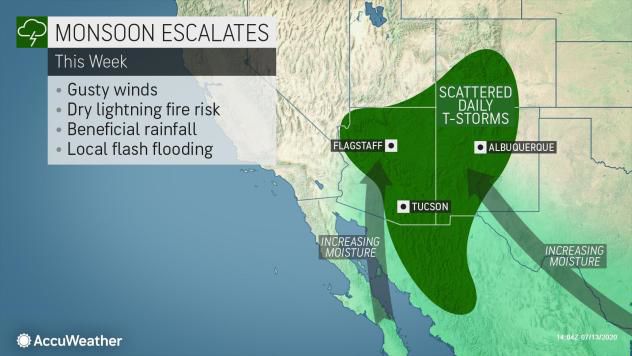 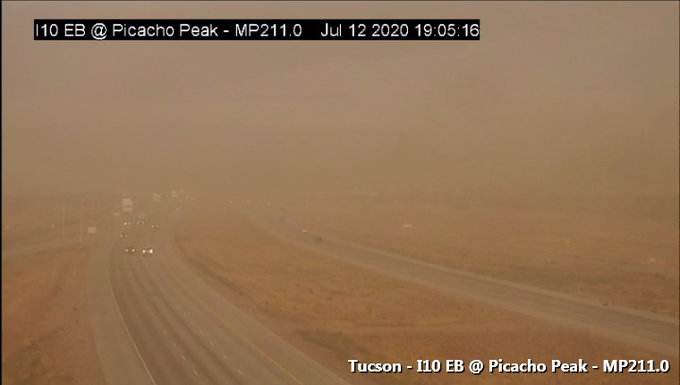 Winds with speeds over 60 mph brought dust storms to Pinal County on Sunday, lowering visibility on Interstate 10 between Eloy and Picacho Peak State Park. No serious accidents were reported.

TUCSON — An uptick in monsoon thunderstorms will help to gradually cut back on an extreme heat wave gripping Arizona and portions of the southwestern United States.

However, the storms may also pose new risks to the region.

Even though this year’s monsoon is likely to be near to slightly below average in terms of rainfall, an increase in thunderstorm activity that began over the weekend will continue this week over Arizona.

The North American monsoon is an annual plume of moisture that originates from Mexico, the Gulf of Mexico and/or the tropical Pacific Ocean and spreads over the Southwest during the summer months.

A large area of high pressure at the surface all the way up in the atmosphere to where jets cruise helps to pump this moisture northward. Once this moisture becomes trapped beneath the high, it can be recycled on a daily basis even when there is no distinct flow of moisture coming up from the south.

The moisture will become noticeable by way of higher humidity levels, especially when compared to the remainder of the year, which is known for low humidity. Some of the storms could bring torrential rainfall over a small area and other storms could bring little or no rain, but lightning strikes and gusty winds.

During the storms with lightning and/or gusty winds, wildfires can get started and quickly spread over the dry brush and forested areas.

“The North American monsoon makes up nearly 50% of the water for many parts of the interior Southwest,” said Paul Pastelok, an AccuWeather expert long-range meteorologist.

With a worsening drought going into the middle of July, much of the region is awaiting needed rainfall from the monsoon.

Rainfall related to the monsoon can end the threat of wildfires but can also lead to dangerous flash floods and mudslides.

“Looking at Tucson, Arizona, generally during the monsoon period between July and mid-September, rainfall averages between 5 and 6 inches,” Pastelok said. “But, some years have been very dry with only 1.5 inches, while other years, rainfall has been over a foot.”

“We are leaning toward a near- to slightly-below-average monsoon season for rainfall this year,” said Pastelok, who leads AccuWeather’s long-range forecasting team.

“This means that lightning strikes from mainly dry thunderstorms can lead to more fires during the second half of July and through much of August, and that the wildfire season and drought conditions can linger,” he explained.

The overall position of the high pressure area will help to determine the extent of the monsoon. When the high is parked over the Southwest, no new moisture can be tapped. But, when the high shifts eastward at times, it could allow more moisture to be drawn up from the tropics.

“Since the big high pressure area will meander eastward toward the Plains and Mississippi Valley at times this summer, such as during the middle and latter part of this week, it will allow some moisture to spill up from the south,” Pastelok said.

If it were not for the occasional eastward migrations or extensions of the big high pressure area, rainfall might be well below average for the Southwest this summer.

“The eastward shift of the high can make some thunderstorms occur in Nevada and Southern California for a time at the end of July and early August,” Pastelok said.

People visiting the Southwest and partaking in camping or hiking expeditions are urged to be aware of changing weather conditions and not only at their location but also miles away.

A thunderstorm in the distance could be producing torrential rainfall that causes water to flow rapidly through normally dry canyons and stream beds known as arroyos. Flash floods of this nature have taken many lives of unsuspecting motorists, campers and hikers over the years.

A dry stream bed or canyon can transition from completely dry to major flood in a matter of seconds.

And it’s not only flooding that’s a concern with the storms. It is not uncommon for gusty winds to occur on the periphery or onset of a monsoon thunderstorm. The winds can kick up enormous clouds of dust, known as haboobs, that can bring the visibility to near zero in a matter of seconds. It is important to recognize the approach of these storms when on the highway. Once the landscape has been thoroughly moistened by rainfall, the risk of haboobs diminishes substantially. Usually the risk of haboobs is greatest at the onset of the monsoon.

It is also not uncommon for temperatures to surge ahead of the ramp up of the North American monsoon, just as that which occurs in India and other parts of Asia every year from the Southwest monsoon.

Temperatures surged over the southwestern U.S. from late last week to this past weekend, but they are in the process of throttling back this week as the high pressure area shifts eastward and cloud cover increases.