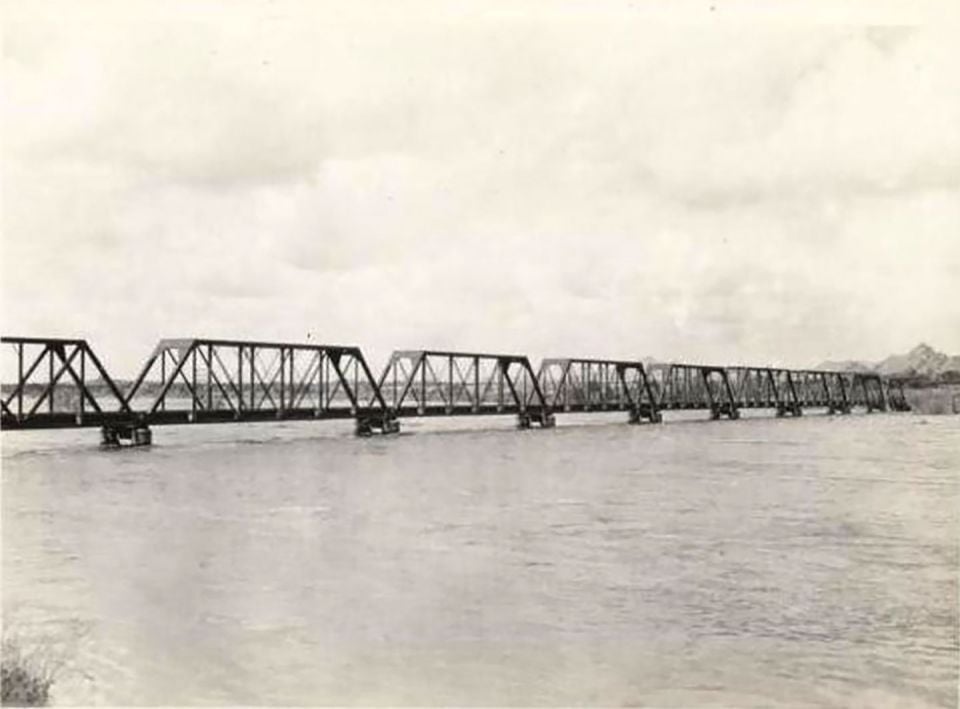 The Union Pacific Salt River Bridge in Tempe as completed in 1912. 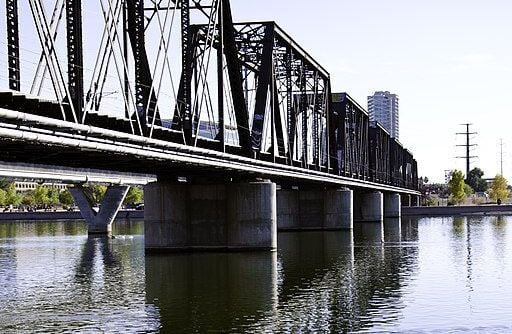 Each truss structure rests on concrete piers at each end. Photo courtesy of David Pinter / CC by https://creativecommons.org/licenses/by/3.0

TEMPE -- The Union Pacific Salt River Bridge, a technological marvel at the time it was built in 1912, has survived more than a century of floods and weather events on the Salt River, in an area now known as Tempe Town Lake. That record ended with a train derailment and fire on Wednesday, July 29.

There were 95 cars on the train — three were derailed and landed in the empty park below the bridge. Two of the derailed cars contained cyclohexane, with one leaking into the dry ground — not into the lake. The third downed car contained a rubber material.

Three previous railway truss bridges on the site, built between 1887 and 1912, were each washed away by floods.

The Arizona Eastern Railroad, part of the Southern Pacific Railroad, built the steel structure known as a truss bridge, with nine, Pratt-style spans stretching 1,291 feet from bank to bank in 1912. It provided a long-term solution to the destructive floods that impeded railway progress in the early part of the 20th century.

In the wake of the derailment, expert faculty members from ASU’s School of Sustainable Engineering and the Built Environment in the Ira A. Fulton Schools of Engineering provide insights on the history, structure and future of the Union Pacific Salt River Bridge. They are Samuel Ariaratnam, professor; Anthony Lamanna, associate professor; Barzin Mobasher, professor; Narayanan Neithalath, professor; Ram Pendyala, school director, professor; and Subramaniam Rajan, professor.

Question: What is a truss bridge?

Barzin Mobasher: A truss bridge consists of multiple, interconnecting triangular structures fabricated with straight pieces of metal or timber which cannot be distorted by stress. The Salt River Bridge is a Pratt-style truss and is comprised of nine metal spans which rest on concrete piers.

Each span, or segment of the bridge, consists of two trusses – right and left. Each truss has a horizontal top chord, which absorbs the compression force, and a bottom chord, which carries the bending forces as a train passes through. The two trusses are connected at the top by diagonal, X-shaped members, called braces, which serve to hold each other in place.

Tension force can straighten the structure, while compression force can cause the structure to sway and buckle – with tension failure most likely where two elements are connected. Vertical and diagonal components between the chords add strength and help carry the weight of a moving train to the piers so that the tension connections do not fracture and the compression components don’t buckle under the load.

Q: Since the bridge is owned by the railroad, is it exempt from local and national structural inspections?

Samuel Ariaratnam: Railroads are regulated by the federal government because they engage in interstate transportation. The Federal Railroad Administration (FRA) is part of the Department of Transportation, and has established federal safety requirements for railroad bridges. FRA requires private railroad owners to implement bridge management programs that include annual inspections of bridges and to know the safe load capacity of their bridges. These are enforced through 49 C.F.R. Part 213 “Track Safety Standards” and 49 C.F.R. Part 237 “Bridge Safety Standards” and provide Congress mandated regulations. Design and ratings of railroad bridges can be found in the American Railway Engineering and Maintenance-of-Way Association (AREMA) “Manual for Railway Engineering.”

Q: It has been reported that the railroad inspected the bridge in early July, shortly after a June 26 fire-derailment event. What are the reporting regulations for these inspections?

Anthony Lamanna: Railroad bridges are inspected regularly. When a bridge rating starts to go down, indicating deterioration of the bridge, the inspection periods get shorter. In addition to repairs, other remedies may be taken, such as a slow order to restrict the train speed over the bridge.

It’s important to remind people that the outward appearance of a bridge doesn’t necessarily reflect its structural soundness. For example, the Burro Creek Canyon Bridge in Western Arizona is built of corten weathering steel and is designed to rust. The rust formed by this special steel creates a tight coating that protects the underlying steel. So while it looks rusted, it is structurally sound. 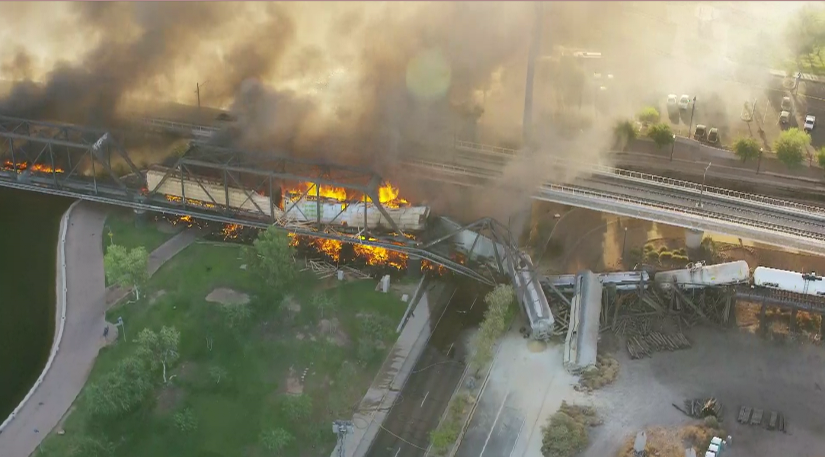 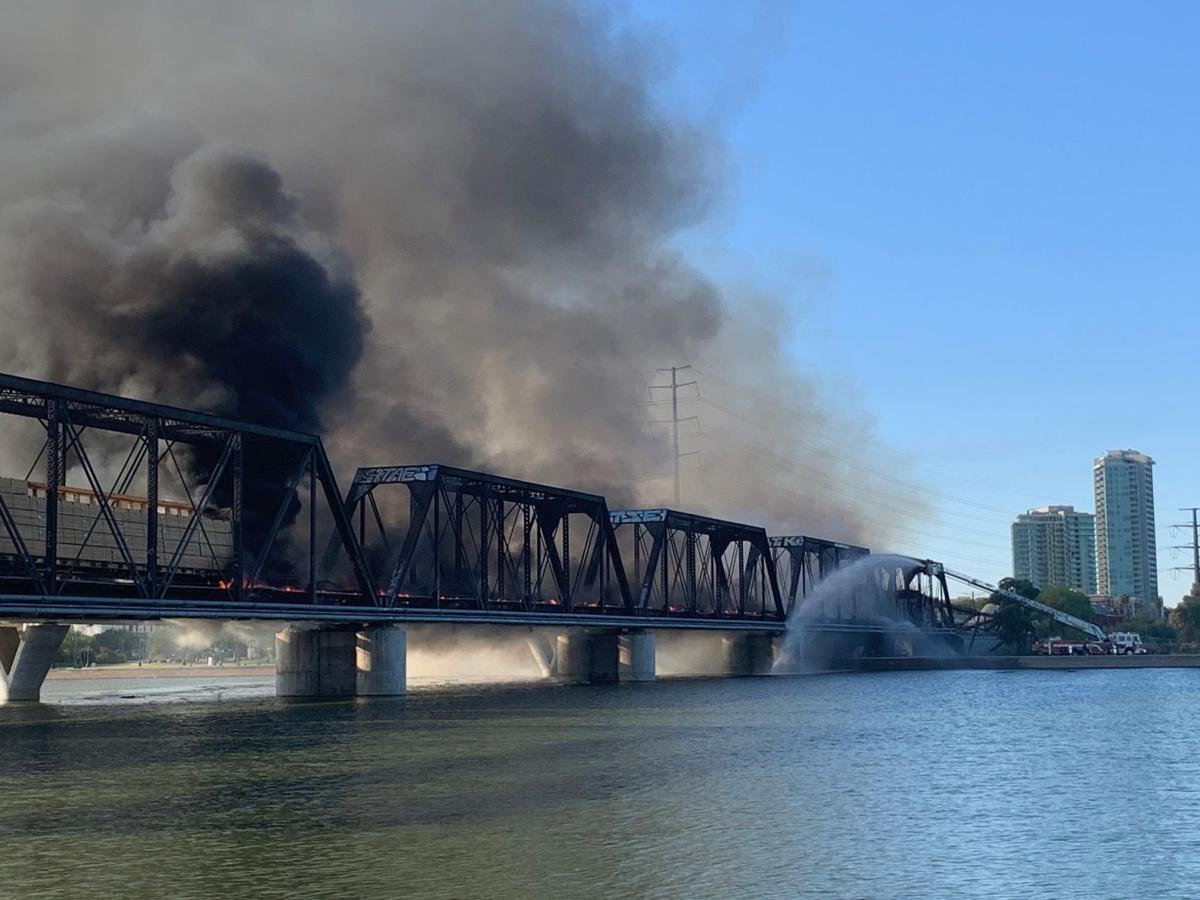 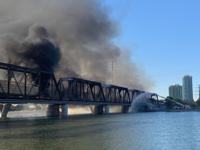 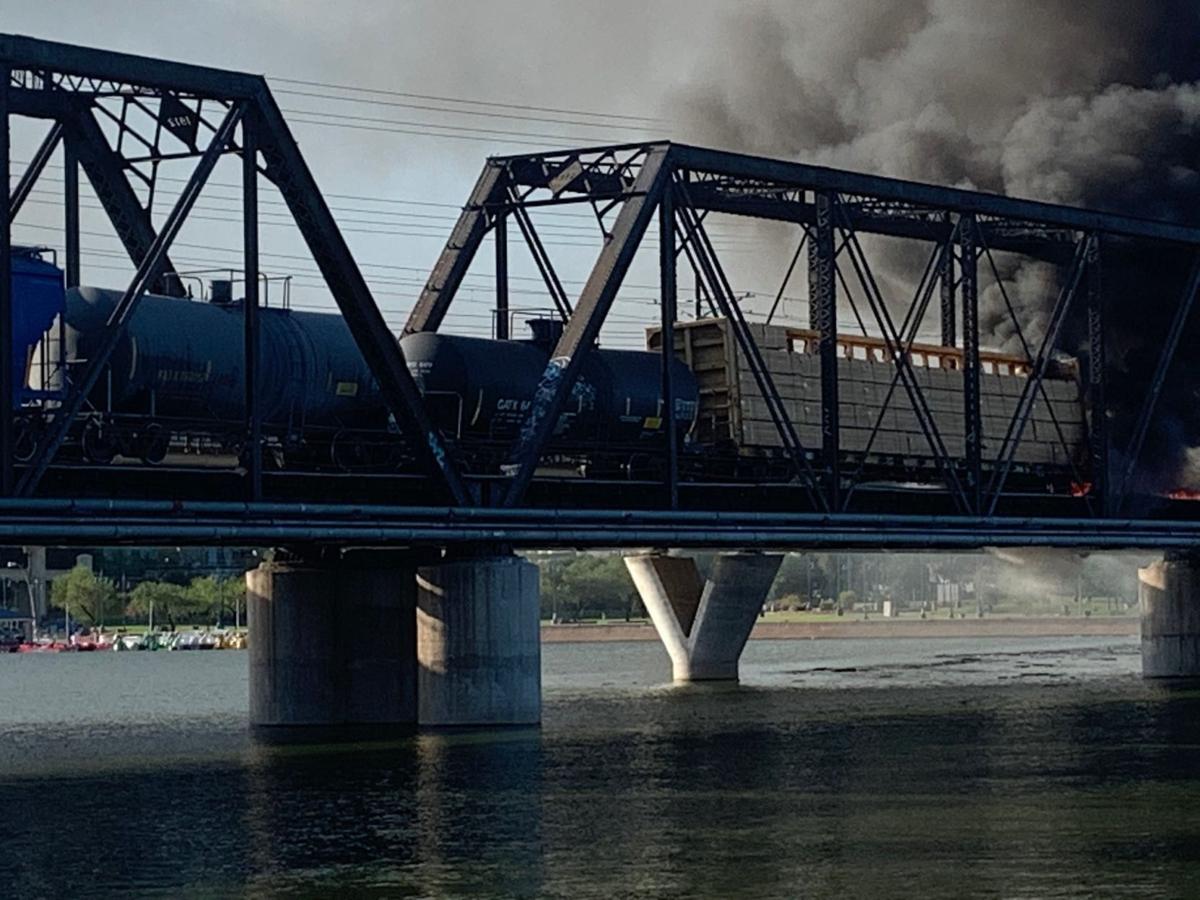 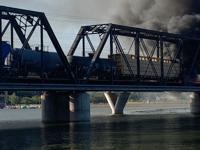 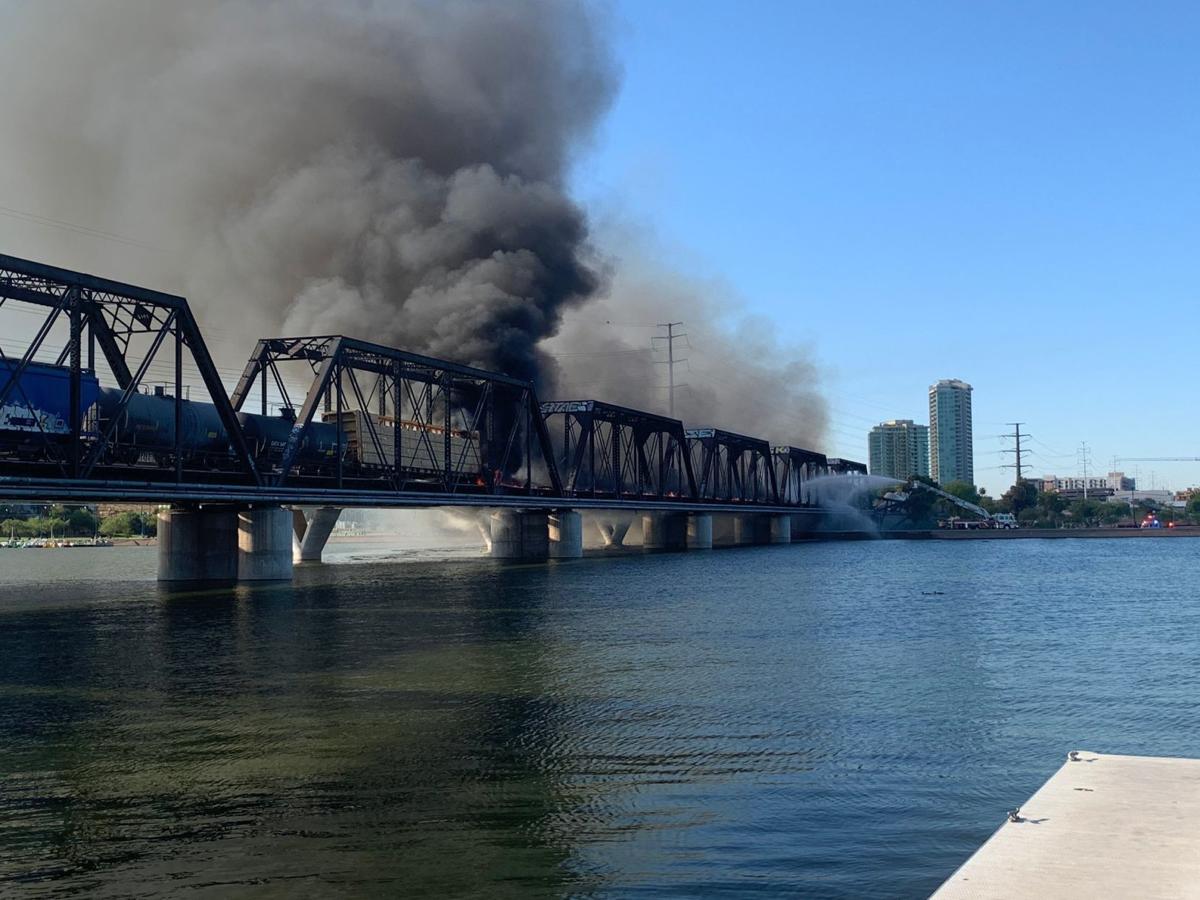 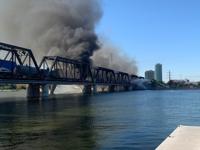 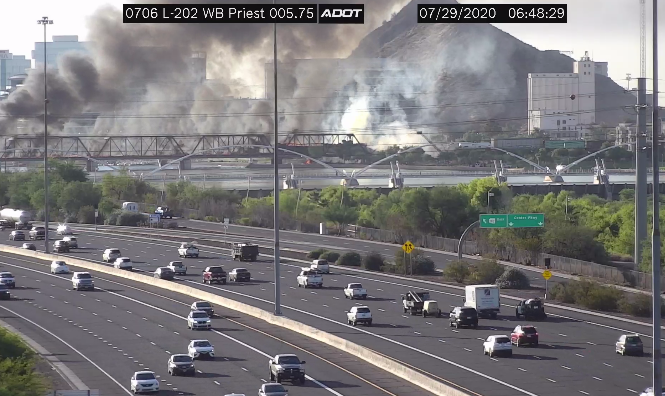 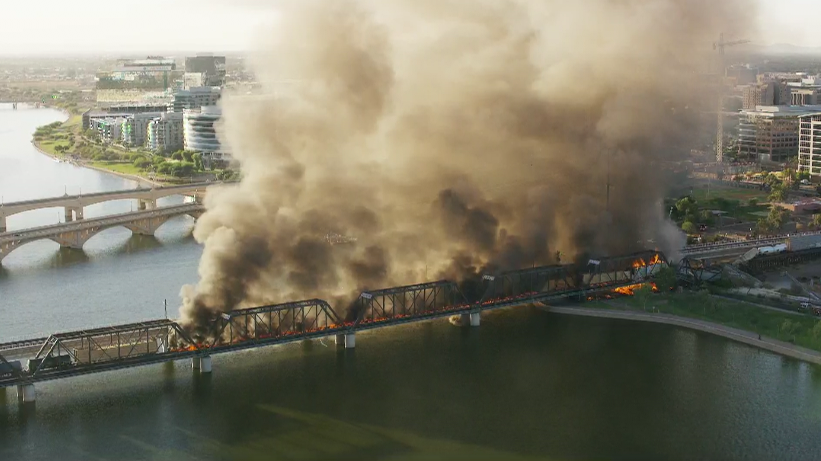 Q: What are the potential causes of the bridge collapse?

Mobasher: Because the bridge is 108 years old, potential causes include degradation overload vibration, failure of a single connection, gusset plate failure, cracking in a tension member and lack of redundancy in the structural design.

While this is not yet clear, the train’s derailment could result in an impact event.

It also is not yet clear if any structural health monitoring tools, including fatigue crack monitoring, were done to assess the existing condition — especially after the June 26 fire/derailment. While it is stated that there was an inspection done earlier, impact would take out essential structural components leading to buckling and failure.

Q: What types of long-term structural damage can be expected after this type of fire and derailment on a 1912 truss bridge? Because of its age, is it worth trying to repair the existing bridge, even temporarily, while a new bridge is constructed?

Narayanan Neithalath: The fire will reduce the structural strength of steel starting at around 600 degrees F; so the initial damage could be exacerbated by the fire. Deformation and buckling happens before complete failure. This of course, could have depended on the initial bridge condition also — it was inspected as recently as July 9 — so we don’t know the actual cause. It looks like the initial damage was impact-related, and it is not materials-related, such as fatigue, even though the impact of long-term vibrations on the structural integrity of the bridge cannot be discounted.

The train derailment, the cause of which still needs to be determined, likely led to the partial bridge collapse, and the fire that resulted could cause further damage to the bridge. The lumber cars burned for a significant length of time, and more than half the truss bridge was subjected to significant fire.

It is likely that a significant portion of the bridge would need rebuilding, along with detailed assessments and strengthening of the concrete support structures on the south side where the fire burned.

Subramaniam Rajan: Steel is a very durable structural material and has been the material of choice for railroad bridges built before 1970s.

This is the section that is completely damaged and where the rail cars have fallen from the bridge. I suspect that the derailment of the rail cars in this section triggered the collapse and subsequent fire of the rail cars in both sections of the bridge. Older bridge designs, while meeting the design code, do not have enough redundancy in the design. A recent example of progressive collapse of steel bridges is the collapse that occurred at I-35 W in Minneapolis that, in retrospect, did not have enough redundancy in the design.

There are hundreds of steel bridges in the United States which have a very good history of being durable and long-lasting if they have been properly maintained.

Mobasher: A timeline history will tell us what the exact sequence of events was. One would need about 30 to 60 minutes of fire for the steel to lose stiffness — the point at which spans which were easily carrying the traffic load, will buckle. At 500 degrees C (930 F) , steel is unable to carry its own weight and both strength and stiffness drop by 50%.

That loss of stiffness makes buckling of many elements practically imminent. It is important to note that when the full weight of a train rail car is on a single truss, the failure of a one component can result in the structural failure.

From an environmental point of view, wood fire, like the burning lumber cars in the recent derailment, is less damaging than hazardous chemicals. However, the duration of the wood fire burn in this incident ensures that high enough temperatures were reached.

Q: What does fire do to steel structures?

Neithalath: Steel in structures such as bridges undergoes significant property deterioration under fire, even though the temperature of lumber burning cannot melt the steel. If temperatures greater than 300 degrees C are imposed for even a shorter time duration, there could be loss of structural strength and stiffness, and increase in deformability of the material. However, the type of steel used in this bridge (since it was constructed a century ago, and rebuilt multiple times) is important in determining the extent of damage. The exposure to fire would cause warping and twisting of members in the bridge, which will interfere with structural stability. Fire also changes the microstructure of steel, depending on the composition of steel.

Mobasher: Much like the World Trade Center, the extended period of fire results in the reduction of stiffness and strength of steel. The fire of the construction grade wood on a rail car takes an extended amount of time, so components can fail sequentially.

Q: Did all of trusses fail at the same time, or there could have been a sequential time lapse failure?

Mobasher: Both could be possible given the nature of fire and the railcars.

Q: Could the fire have started after the impact?

Mobasher: The momentum of a moving train is sufficiently high to cause significant damage. Which came first is not known now. The origin of the fire needs to be determined as well.

Q: Are there specific, new types of bridges that would likely be used over Tempe Town Lake?

Lamanna: If the bridge has to be replaced, it’s likely they can reuse the piers. This means they might be able to use more modern technologies to speed up the construction of a new bridge. For example, they could use precast concrete girders that are made off-site, trucked in, and lifted into place.

Neithalath: Modern high speed rail systems use concrete box girder or arch bridges, steel arch bridges or steel-concrete composite bridges. These novel structural systems could also be used, though not as simple as steel truss bridges in analysis and design. Considering the increased loadings that these bridges are subjected to, as compared to what these were designed for, newer and more efficient bridge types could be considered.

Q: From a transportation perspective, how much impact will the loss of this bridge have on railway cargo commerce? Are there other routes that can be adapted until it is rebuilt/replaced?

Ram Pendyala: A bridge is always a major lifeline in a transportation network. When it gets severed, it can lead to significant disruptions in the movement of freight. So, the impact of the loss of this bridge could be quite significant, especially if trains have to be rerouted substantially. Even if there are other routes that can be adapted until the bridge is rebuilt, it is likely that rerouting trains will add considerable cost and travel time, as well logistical challenges.

If there is plenty of spare capacity on other routes, then the disruption may be less severe; but if spare capacity is limited, movement of freight could be quite significantly disrupted — leading to an adverse impact on commerce. In the midst of a pandemic that has already disrupted supply chains considerably, the loss of this bridge is likely to compound the problem.

Lamanna: Since the incident, trains are already using an alternative route; this route will have increased train traffic and vehicle delays at crossings.

Remember, trains were here first. The tracks don’t cross roads, the roads cross the tracks, which have the right-of-way. In Arizona, trains can legally block a crossing for up to 15 minutes at a time (Ariz. Rev. Stat. §40-852), which is typically longer than we see under normal conditions.

Terry Grant is Media Relations Officer, Media Relations and Strategic Communications at Arizona State University. She can be reached at 480-727-4058 or Theresa.Grant@asu.edu

TEMPE -- A freight train crossing a bridge in Tempe derailed Wednesday, setting the bridge a…