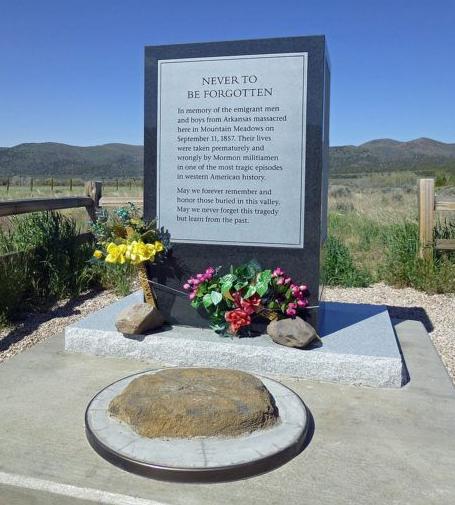 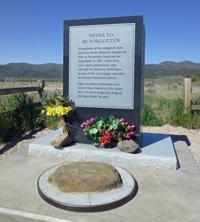 The Men and Boys Memorial marks the spot where migrants were massacred by Mormon militiamen in Utah during the Mountain Meadows Massacre in 1857. (Photo by: Wikimedia Commons) 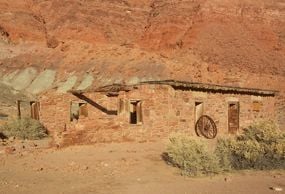 Below, a brick building is all that remains of Lee’s Ferry, a service that brought settlers over the Colorado River in the Grand Canyon. 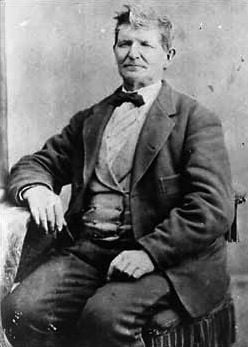 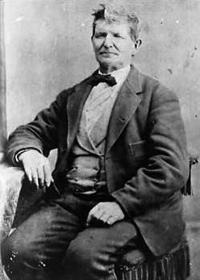 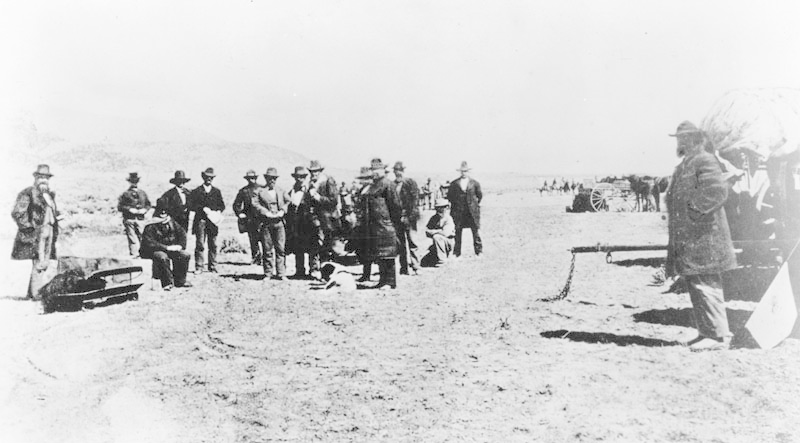 Above, John D. Lee is seated next to the coffin just prior to his execution. Below, a brick building is all that remains of Lee’s Ferry, a service that brought settlers over the Colorado River in the Grand Canyon.

PHOENIX — The Senate Government Committee voted 6-1 Wednesday in favor of establishing a memorial on the Arizona Governmental Mall for a man who helped plan and carry out the mass murder of more than 120 people.

According to the Church of Jesus Christ of Latter-day Saints, John D. Lee was an LDS major in the militia of Iron County, Utah, when he led the attack on a caravan of settlers from Arkansas that was traveling through Utah to reach California.

On Sept. 7, 1857, Lee, and 50-some fellow Mormon militiamen and a contingent of Paiute Native Americans attacked the wagon train of the Baker-Fancher Party at a place called Mountain Meadows.

Over the course of four days, Lee and his men laid siege to the circled wagons and the families within. After a fake truce that lowered the guard of the settlers, the attackers killed all the men, women and children above the age of 7, leaving their bodies out to be eaten by wild animals, according to information from the National Parks Service.

Years later, Lee fled to Arizona where he built a ferry service at a crossing point in the Grand Canyon, subsequently known as Lee’s Ferry, according to NPS. He lived there with his two wives and children until 1877, when he was tried, convicted and executed by a firing squad for his role in the Mountain Meadows Massacre. He was the only person to be punished for the attack.

Rep. Brenda Barton, R-Payson, introduced HB 2509 to build a monument to Lee at the Capitol, with the bell from the Lee’s Ferry church tower installed somewhere on the mall.

“I’m a direct descendant of Lee, good, bad or indifferent,” Barton said. “It is important to me and my family and many other descendants.”

Barton’s bill apparently won’t cost the state of Arizona a dime, as the bell is donated and the design, construction and installation of the proposed monument done by a non-profit organization. Fred DuVal, who lost the governor’s race against Doug Ducey in 2014, is the owner of the bell in question. DuVal claims he will deed the bell over to the state when the monument goes up.

“The bell does not have much of a value; the value is in the history,” DuVal said.

What part of Lee’s history is valuable to the state of Arizona is uncertain. While the crossing is named for him, Lee did not discover the location and wasn’t the first to ford the river at that point. After he was executed, one of his wives ran the ferry for two years before the LDS Church purchased the operation and sent a different family to run it.

“What we are passing doesn’t do enough to cover the entire history of it,” Sen. Juan Mendez, D-Tempe, said.

Mendez was the sole vote against the bill, citing the legacy of oppression that settlers inflicted on Native Americans as they took land that they believed was unoccupied.

If this bill is signed into law, the proposal will be submitted to the Arizona Department of Administration, which determines a suitable location for the memorial.

The ADOA recommendations would then go to the Legislative Governmental Mall Commission for final design approval. Monuments must be finished and dedicated within two years of the legislation passing.

The Governmental Mall already has a bell, featured prominently in front of the Capitol building. Arizona’s Liberty Bell is one of 53 replicas of the bell that rang out the nation’s independence in 1776.

The bell was installed in 1950 as part of a savings bond drive across the nation, and was restored 10 years ago.

It is one of 34 monuments already in place in and around the Capitol.

Barton’s bill would bump that up to 35.

Erik Kolsrud is the Don Bolles Fellow covering the Legislature for Arizona Sonora News, a service provided by the School of Journalism at the University of Arizona. Reach him at ekolsrud@email.arizona.edu.

CASA GRANDE — It’s said to be the last known lynching in Arizona.

SAN TAN VALLEY -- In 1918, a company of Texas Rangers descended on the remote border village of Porvenir and executed 15 innocent and unarmed …