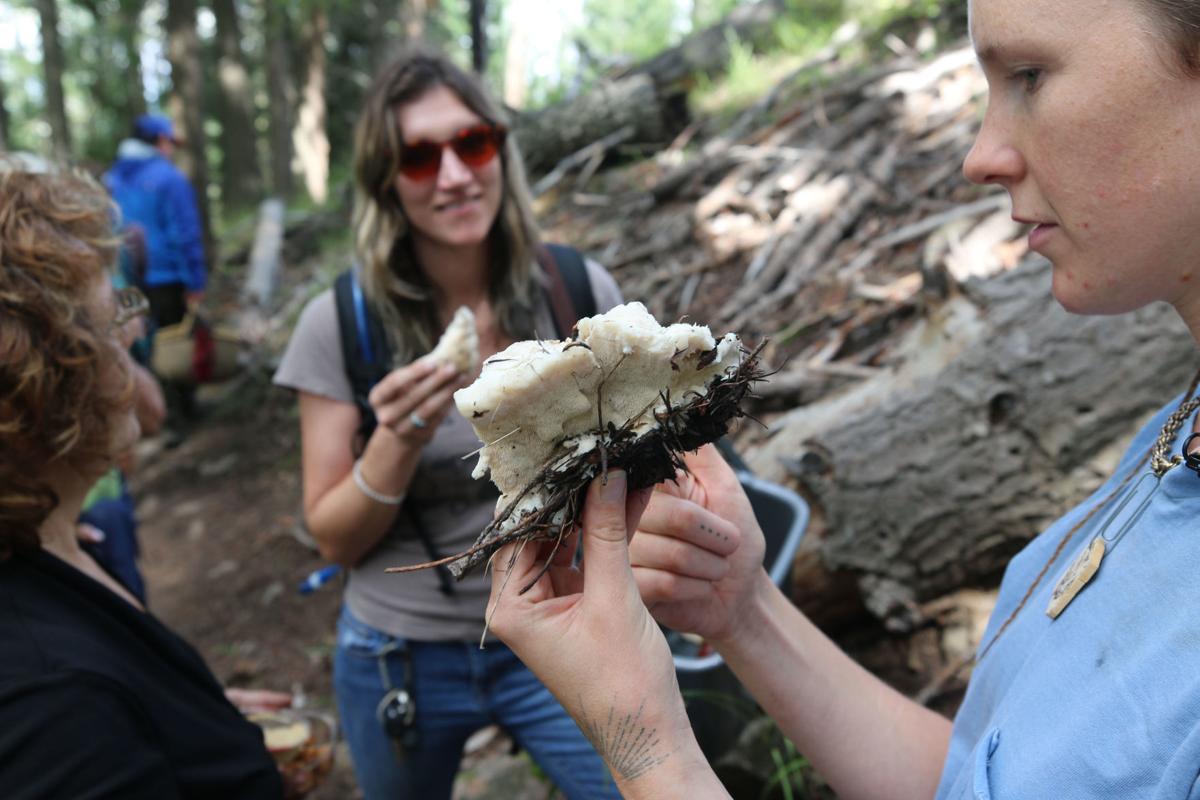 Members of the Arizona Mushroom Society inspect a piece of an enormous mushroom. Mushrooms serve as food for many different animals and insects. (Photo by Dylan Simard/Cronkite News) 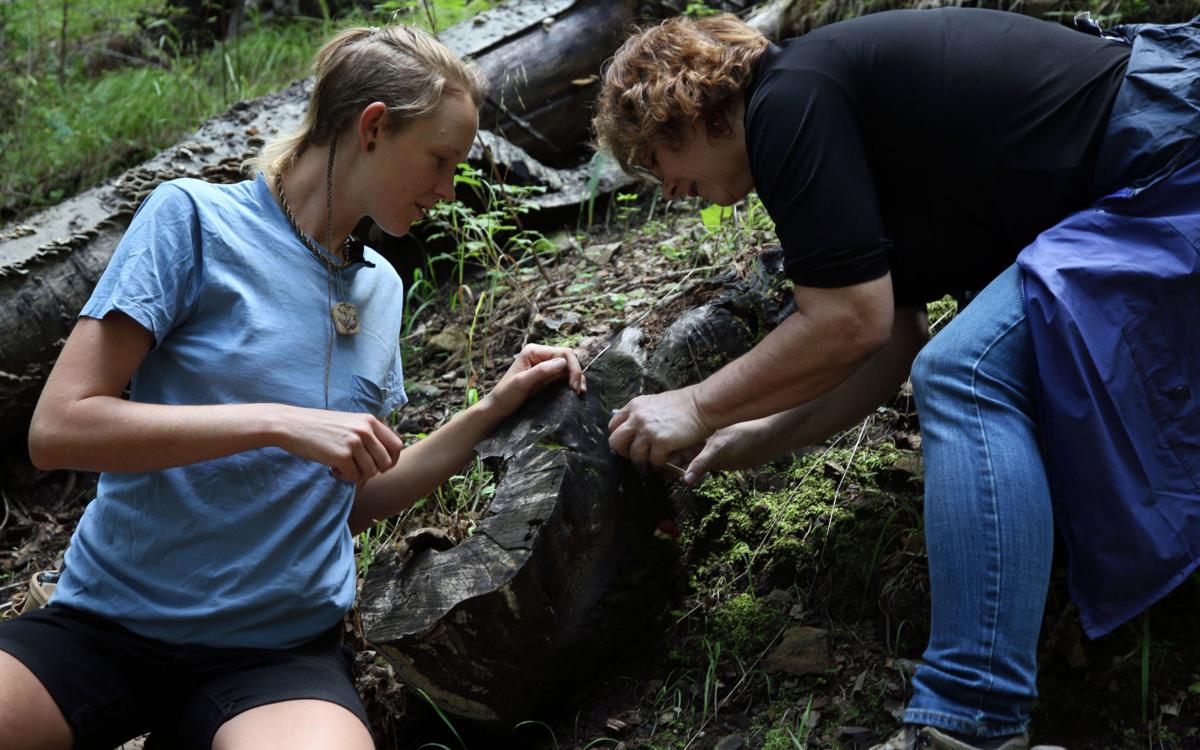 Elizabeth Bilodeau and Ray Younghans find treasure growing in the remains of a tree. To harvest these mushrooms, they slice them off at the base with knives, and then place them in wicker baskets. (Photo by Dylan Simard/Cronkite News) 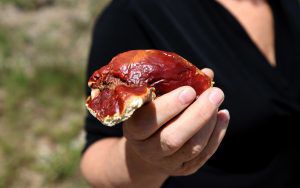 This mushroom, known as chicken of the woods, grows to be enormous, and can be edible if properly prepared. (Photo by Dylan Simard/Cronkite News) 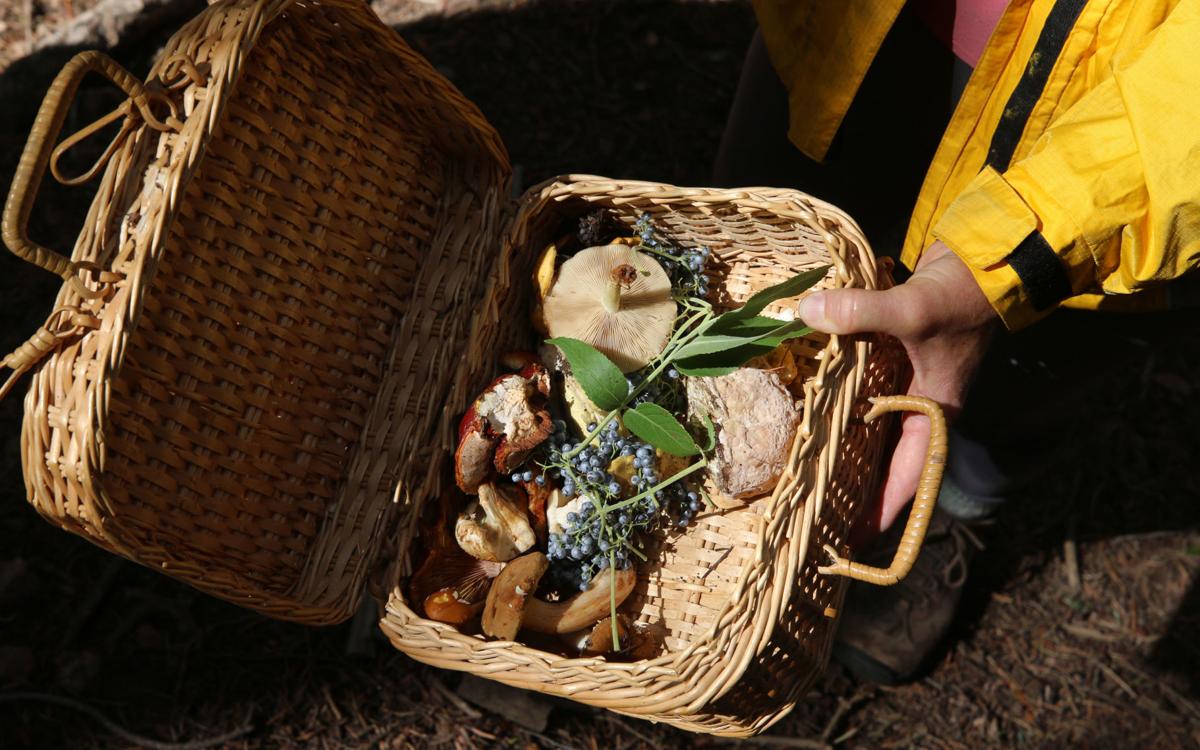 A forager displays their haul, which reveals the diversity of mountain mushrooms. According to the Arizona Mushroom Society, this season was particularly sparse for mushrooms because of the lack of rain. (Photo by Dylan Simard/Cronkite News)

Members of the Arizona Mushroom Society inspect a piece of an enormous mushroom. Mushrooms serve as food for many different animals and insects. (Photo by Dylan Simard/Cronkite News)

A forager displays their haul, which reveals the diversity of mountain mushrooms. According to the Arizona Mushroom Society, this season was particularly sparse for mushrooms because of the lack of rain. (Photo by Dylan Simard/Cronkite News)

TUCSON – The forests of the sky islands above Tucson teem with life. Towering trees scrape low clouds; moss and lichen cling to seemingly every surface. Bracing winds are the white noise of the mountain, pierced only by the cheery conversation of hikers on a quest for hidden bounty: mushrooms.

Tiny, fragile buds, spires and caps protrude from the soil as they recycle nutrients and the carbon common to all living things. They’re essential to the health of the forest – they also can be tasty, if you know which ones to pick.

The hikers are with the Arizona Mushroom Society, which studies and collects Trichaptum abietinum, pholiota and other mushrooms that grow thousands of feet above sea level.

Trekking on Mount Lemmon, society members fan out in the forest, scanning high and low for mushrooms. They come prepared, with serrated knives and porous wicker baskets that hold their harvest and allow spores to spread in the process.

But after this year’s unusually dry monsoon, mushrooms in the lush mountain forests of southern Arizona are sparser than usual. Mushrooms are tied to the rains – a popular field guide to mushroom spotting is titled “All That the Rain Promises and More” – so less rain means fewer mushrooms.

“We need the mushrooms just like the bees need the flowers,” said Fabian Monje, a foray leader for the society, which organizes events and serves as a rallying organization for amateur mycologists across the state.

Mushrooms aren’t threatened by the limited rain, but for mushroom lovers who collect and hunt for these fungi, it can make for a dull season, the American Mushroom Society says.

“Mushrooms come and go with the season and how much rain we get,” Monje said. “We had a great winter, we could have had a very productive summer if (the rain) had continued but, you know, you can’t have both times.”

The dearth of mushrooms isn’t statewide. For instance, summer was good for mycologists in the White Mountains in eastern Arizona, but up north near Flagstaff, hardly any mushrooms were harvested. On Mount Lemmon, foragers haven’t found an abundance of mushrooms, but they’re still satisfied with the crop.

For society members, the fungi represent more than just tiny monuments to the cycle of life. Many of them are rare delicacies – a far cry from the mushrooms you put on your pizza. For example, the plate-size “chicken of the woods” (Laetiporus sulphureus) is nutritious and thought to hold a myriad of pharmacological benefits.

For people accustomed to enjoying these delicacies, dry summers can be quite disheartening.

“As we have learned, the mushrooms will do what they want to do when they want to do it,” said Elizabeth Bilodeau, fundraising coordinator for the Arizona Mushroom Society and frequent participant in foraging events. “So we are just hoping that our season still is not over yet, but it’s going to start getting cold and when the temperature starts to drop the mushrooms … hide.”

In the meantime, the few mushrooms that emerged this season will slowly begin to disappear in the coming months. And for those still willing to make the trip to the high wooded hills around Arizona in the coming weeks, treasures yet linger.