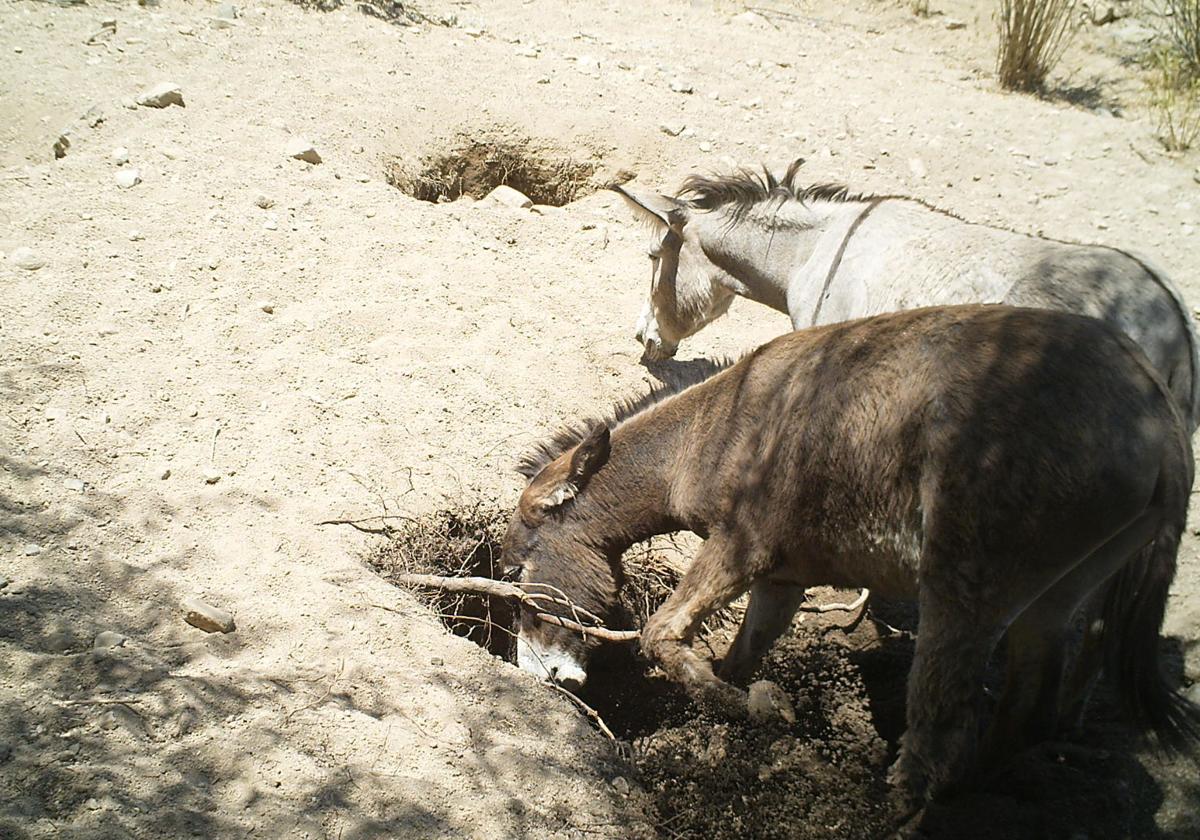 Feral equines like donkeys and burros sniff out water and dig wells that are used by other wildlife. 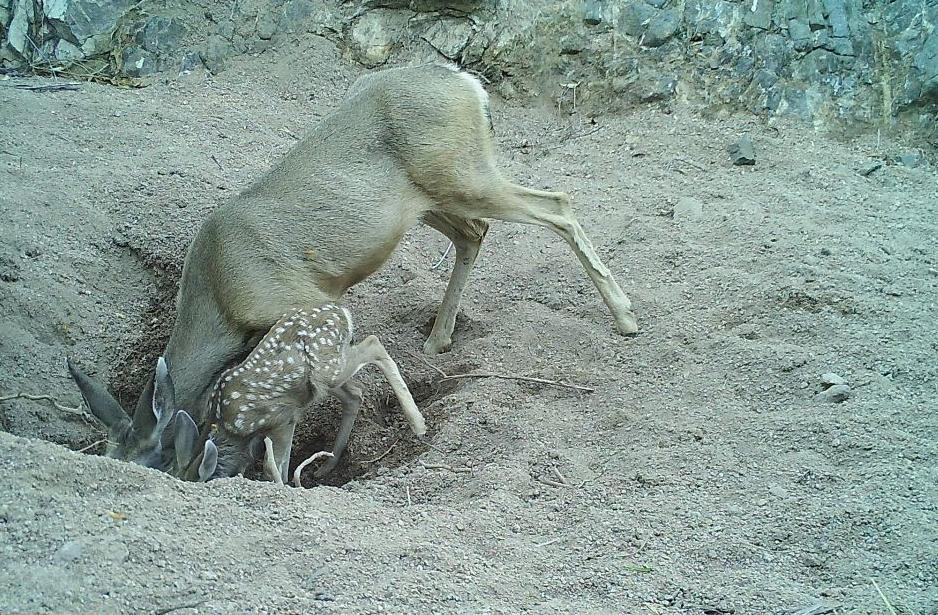 A doe and a fawn drinking from an equine week, as seen by a remote camera.

Now, an Arizona State University doctoral candidate has discovered that horses, donkeys and other equine species, which are seen as "invasive," actually help shape desert ecosystems, fulfilling the same function long-extinct species once did.

Erick Lundgren, a doctoral candidate in the School of Life Sciences, led the study. He was working in areas with wild burros. Colleagues considered them invasive species.

"I was fascinated by them because these landscapes that I was working in used to have equids not that long ago," Lundgren said. "Ten-, twelve-thousand years ago, most north American ecosystems had horse-like animals until humans arrived and we see the loss of many big animals from the world's ecosystems. And then when I saw them digging wells, it fascinated me because I had years ago read about elephants doing this in Africa and how sometimes during the dry season, the only water available is in these wells that elephants dig."

Feral equines can dig holes up to 6 feet deep. They are very specific about the exact location they dig in. They may locate water by smell, or they may dig in spots that have worked out in the past for them.

The wells not only benefit them, but other species and the environment. Camera traps caught 59 species at equine wells in the Sonoran and Mojave deserts, including bobcats, coyote, deer and javelina.

"This behavior of ecosystem engineering is in this case provided by species that have been introduced, but that are morphologically and taxonomically very similar to species that were once present," Lundgren said.

“Horses were part of north American landscapes since the Pliocene, so millions of years of equids," he said. "They evolved here. All the species you think of here in North America evolved in the context of these big animals, things like horses and mammoths and camels. The world that we look at today is very quiet compared to what it was. And in some ways, our reaction to things like wild horses and donkeys is really a reaction to a change to actually how things used to be. We see the disturbance and the trampling and the poop, and we think, 'This doesn't belong. This isn't the quiet nature I grew up with, or that I think belongs here.' But actually that's really just a geologic blink where that wasn't around.”

A bobcat sneaks up to take a drink from a well dug by desert equines. Photo courtesy Erick Lundgren

As summer sets in and intermittent streams dry up, equine wells can be the only source of water for long distances, for both plants and animals. They serve as nurseries for Fremont cottonwood seedlings and other young plants.

Conventional wisdom holds that introduced (usually called “invasive”) species are harmful to native environments. The study suggests that the opposite may be true.

“The reintroduction of megafauna may, in certain cases, replace lost ecological functions in a community,” the authors wrote. “Feral equids can increase water availability in drylands, with associated effects on a variety of species and ecosystem processes. We suggest that well-digging by feral equids may replace a function lost with the extinctions of large vertebrates across the world’s drylands.”

“One of the larger cultural contexts of this is that this behavior is quite common," Lundgren said. "I've received hate mail from ecologists about this paper who mentioned, 'Of course they dig wells to water, but they're horrible invasive species.' So what I find particularly interesting is that this has never been studied. It has never been described in the literature. That's because these organisms have been studied from a single kind of myopic paradigm of invasion biology, as opposed to being studied as wildlife. Which is not to say that we're claiming these animals are saviors. We're just studying them as wildlife. And when you do that, you find a whole new perspective on modern ecosystems and prehistoric ones too.”

The work was led by Lundgren. The research was completed as part of his master’s degree work while he was at ASU. Julie Stromberg, Jianguo Wu, and Karla Moeller are the other authors from ASU.

The paper was recently published in the journal Science.

Top photo: Wild burros use their hooves to dig wells to water sources in a desert ecosystem. While considered an "invasive" species, they perform a function that benefits the ecosystem. Courtesy Erick Lundgren