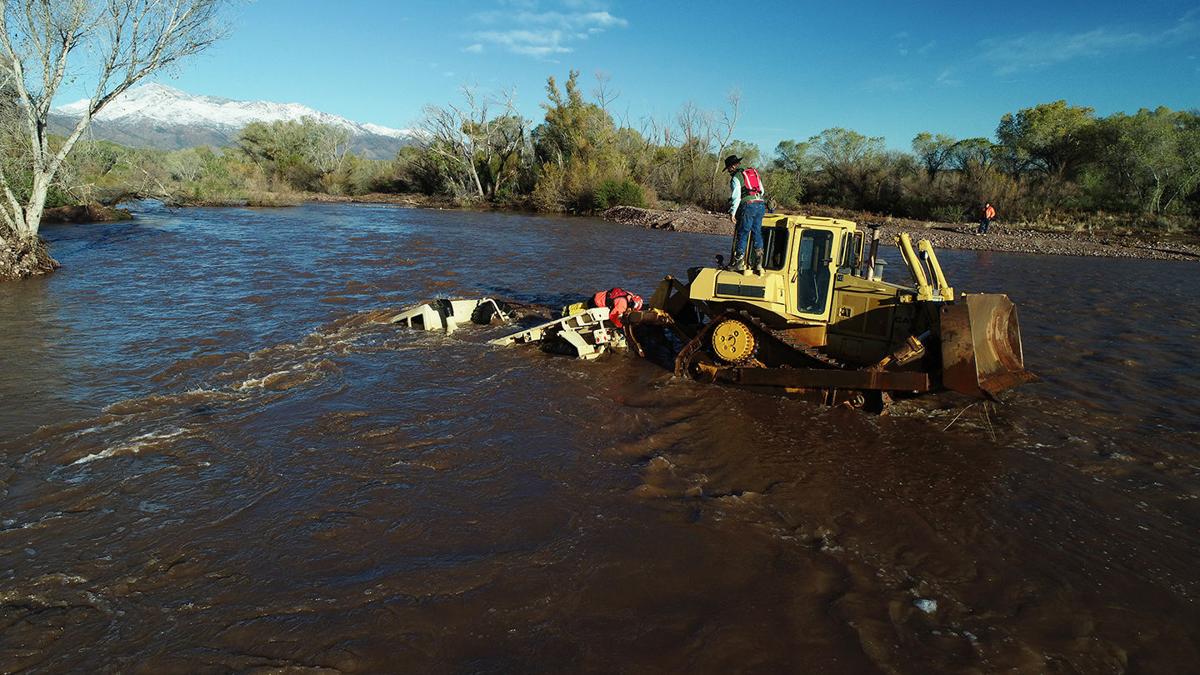 A county bulldozer was used to pull the Rawlings’ military-style vehicle out of Tonto Creek on Nov. 30 near Payson. 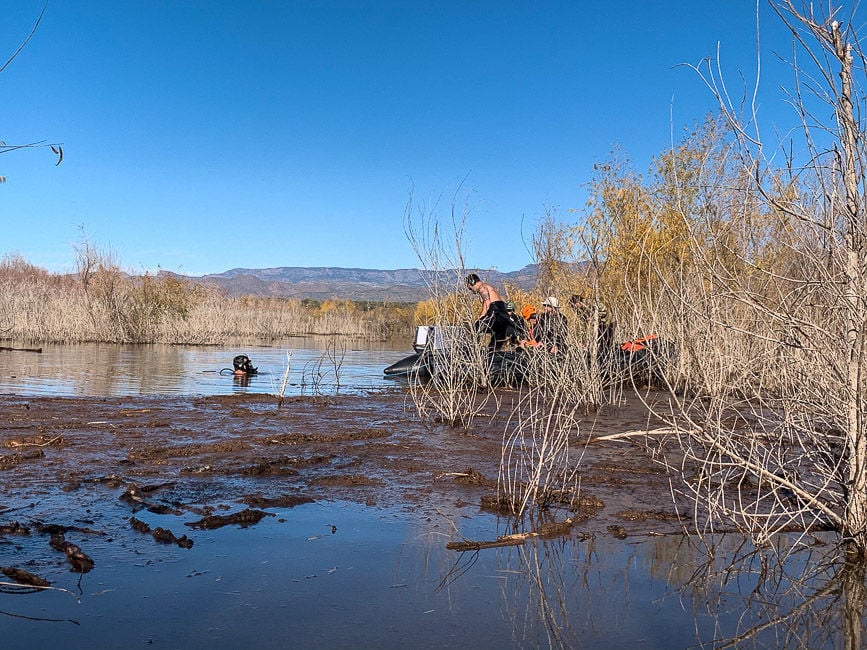 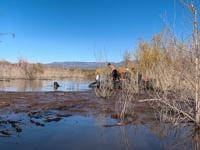 Search and rescue crews look for Willa Rawlings in Tonto Creek. Willa was among three children who drowned in late November after the vehicle they were in got stuck in the creek and flooded with water. 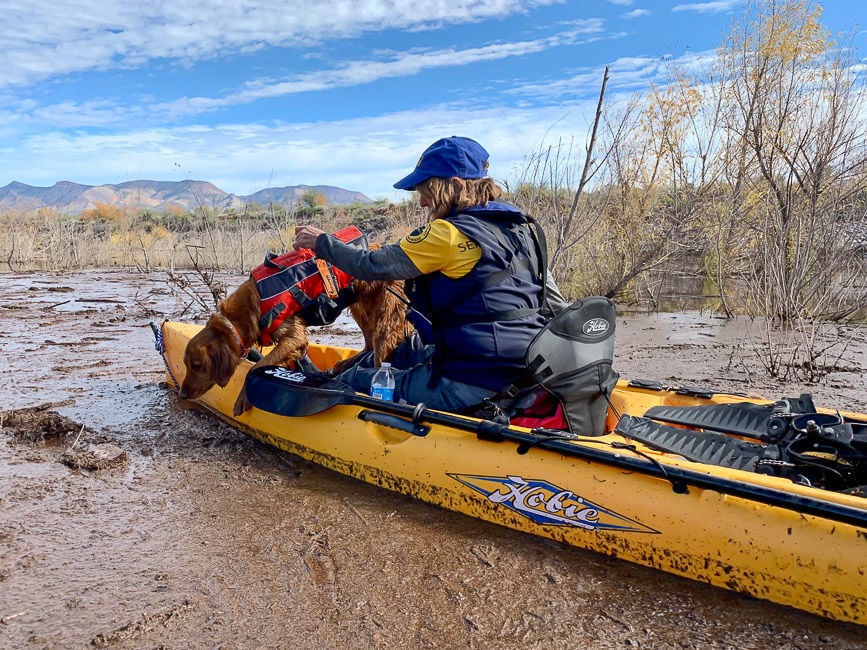 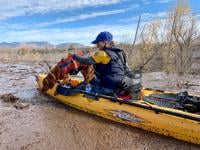 Between Nov. 30 and Dec. 13, eight counties provided personnel to help look for the body of Willa Rawlings, who was swept downstream.

A county bulldozer was used to pull the Rawlings’ military-style vehicle out of Tonto Creek on Nov. 30 near Payson.

Search and rescue crews look for Willa Rawlings in Tonto Creek. Willa was among three children who drowned in late November after the vehicle they were in got stuck in the creek and flooded with water.

Between Nov. 30 and Dec. 13, eight counties provided personnel to help look for the body of Willa Rawlings, who was swept downstream.

PAYSON — Daniel Rawlings stopped at the Bar X crossing of Tonto Creek and studied the rush of water. Seven children sat in the cab of his family’s large, flatbed truck, excited by the storm and the chance to play with their cousins during a visit with grandparents and uncles.

Did it look worse than the crossings he’d driven through twice already — both times at the upstream crossing his family usually used?

For the third time that day, Daniel Rawlings crossed the creek.

But this time, the truck got stuck.

All seven passengers in the military-style truck were thrown into the river. Three children drowned.

Now, the Gila County Attorney’s Office has filed child abuse charges against Daniel and his wife, Lacey Rawlings, for taking their four children and three cousins into the flooded creek. Daniel also faces three counts of manslaughter. The court has already held three hearings, with two more slated for June 1 and 24.

The case turns on Daniel’s decision to risk the floodwaters at an unfamiliar crossing, driving around road closed signs. Was it a tragic mistake? A criminally reckless decision? Many residents believe the loss of three children has inflicted punishment enough on the family.

A jury will have to weigh each of those questions.

The sequence of events has only now come to light with the release of the Gila County Sheriff’s Office investigative report, including interviews with some members of the family. The Roundup got the 40-page report through records requests, including accounts from detectives, deputies, searchers and fire personnel.

According to their reports, county road crew workers had placed road closed signs on both sides of the creek at the Punkin Center, Bar X and A Cross crossings.

The creek had risen after a three-day storm in the higher elevations sent water down the normally quiet creek. The 70-mile-long creek drains a 420-square-mile watershed, so the flows measured in Tonto Basin reflect rain and snowmelt from distant mountain slopes. The creek can flood even when there’s very little rain falling on Tonto Basin.

Daniel and Lacey were visiting his parents, William “Bill” and Trudy Rawlings, on the east side of Tonto Creek for the Thanksgiving holiday. They arrived on Nov. 27 with their motor home, which Daniel drove, and their other vehicle, which Lacey drove. Lacey told investigators when they initially crossed the creek to stay with relatives on the east side, no barricades were up. The creek was running, but not high, she said.

Jay and his three daughters arrived at his parents’ home the morning of Nov. 29.

Lacey said members of the family had taken Bill’s Unimog-style vehicle across the creek several times at Punkin Center with no issues. She said they referred to the military-style vehicle as “Joe” and the children called it “GI Joe.”

Bill later told Detective Thoreina Hensley that the children were bored that day because there was nothing to do. He said they wanted to go for a ride.

A witness later contacted GCSO Deputy Don Engler and said they had a video of the vehicle crossing at the store crossing some 40 minutes prior to the truck getting stuck in the creek. In the video, the driver opens their door to look at the water height.

The Rawlings reportedly went to the dollar store and a local market.

They got back in the truck and crossed back successfully at Punkin Center.

After crossing back to the east side, Lacey said the children wanted to cross again, saying “Dad, please, let’s go one more time. It was fun.”

They were nearly back to Bill’s home when Daniel decided this time to go to the Bar X crossing.

And that is “where the mistake was made,” Bill told Hensley.

“Bill said he has driven that truck across the creek many times, but not across the Bar X crossing,” Hensley wrote.

Lacey said Daniel got partway across the Bar X crossing when he decided the water was too high.

“She said when Daniel put it in reverse ... the truck did nothing,” Hensley wrote. “She said he tried going forward and nothing happened.”

Witnesses reported seeing Daniel “rock” the truck back and forth, trying to get it out.

Unable to free the vehicle and, “with water rising and coming up into the floorboards, Daniel requested Lacey put the children out the passenger side window and on top of the vehicle roof,” wrote Detective Karen Baltz.

Lacey told Daniel she had no time to move the children to the roof. So she rolled down her window.

“Once passenger window was opened, water flooded in, washing everyone out of cab of the truck, leading to all nine persons being washed downstream,” Baltz wrote.

Lacey said she saw her children spread out through the creek. She tried to reach them, but after a rock hit her, “it went black.”

“She said the water and current was so strong,” Hensley wrote. “Lacey said she finally got enough strength and pulled herself up onto some trees.”

Daniel called her on her Apple Watch, asking which children she had with her. When she said she had no one, “he cried uncontrollably.”

The scene was chaotic.

Even witnesses looking down on the scene from a distance had trouble understanding what they were seeing.

One woman camped nearby was taking a picture of a rainbow arching over the creek in the Bar X area. She looked downstream and saw a girl standing about waist deep in the water. Further downstream she saw a man pulling another child onto an island. She also saw a “small, light brown head and shoulder bobbing downstream.”

She didn’t realize a whole family had been swept downstream and were now struggling for their lives.

She had apparently seen Daniel climb up onto a small island in the midst of the current, ultimately helping bring four children safely onto the island.

Frantic and trapped, he called his wife — only to learn the rest of the children were somewhere downstream.

He then reportedly called his father Bill and said the truck had sunk at A Cross crossing and children were missing.

Jay, Bill and Trudy rushed to A Cross. But after they arrived, Daniel called again to say they’d actually been swept downstream at the Bar X crossing.

At the Bar X crossing, Jay spotted Daniel on an island. Jay ran along the shoreline until he found Lacey on another pile of debris and helped her back to shore.

Then they continued to search the shoreline for three missing children.

Rescuers began arriving, only to find the floodwaters too swift and high to enter the creek.

Firefighter Joe Lynch and Fire Chief Steve Holt with Tonto Basin Fire were among the first on scene. Lynch said they found the truck submerged, with only a bit of the cab and rear end still visible.

Firefighters and deputies searching for survivors spotted Daniel and four children on a small island downstream.

Lynch and Holt said they walked along the shoreline looking for the three missing children.

Holt said the deep, muddy rush of water made the crossing “impossible,” which left the rescue crews stuck on the west side until helicopters could arrive.

A Maricopa County Sheriff’s Office helicopter arrived and airlifted Daniel and four of the children from the island to the east side.

Austin, Jay’s daughter, was still missing along with Willa and Colby, the children of Daniel and Lacey.

As night fell, authorities suspended the search around 11 p.m.

The next day, on Nov. 30, searchers found the bodies of Colby and Austin, both 5, south of A Cross Road.

The body of Willa, 6, was found on Dec. 13 in the Orange Peel area south of a beaver dam.

As news of the tragedy quickly spread nationally, the Show Low community rallied behind the Rawlings family. In the White Mountains, residents hung “Rawlings strong” banners and hung ribbons in remembrance.

Daniel later attended a county meeting to thank the community for their support.

Two different bills to fund a bridge over Tonto Creek in Tonto Basin had their first hearings last week. Both passed, but not without caution lights thrown in their path.

GILA COUNTY — There is a snowy stillness that has turned to an overwhelming sadness in the White Mountains as the search for 6-year-old Willa Rawlings continues in Tonto Basin along the banks of Tonto Creek.

A conflict between the migratory bird season around Tonto Creek and plans to clear the site for the new Tonto Creek bridge are altering project plans.

A trial date has been set for a White Mountain couple who face charges after three children, including two of their own, drowned in Tonto Creek two years ago while out on a family outing.