Meth in its finished form. 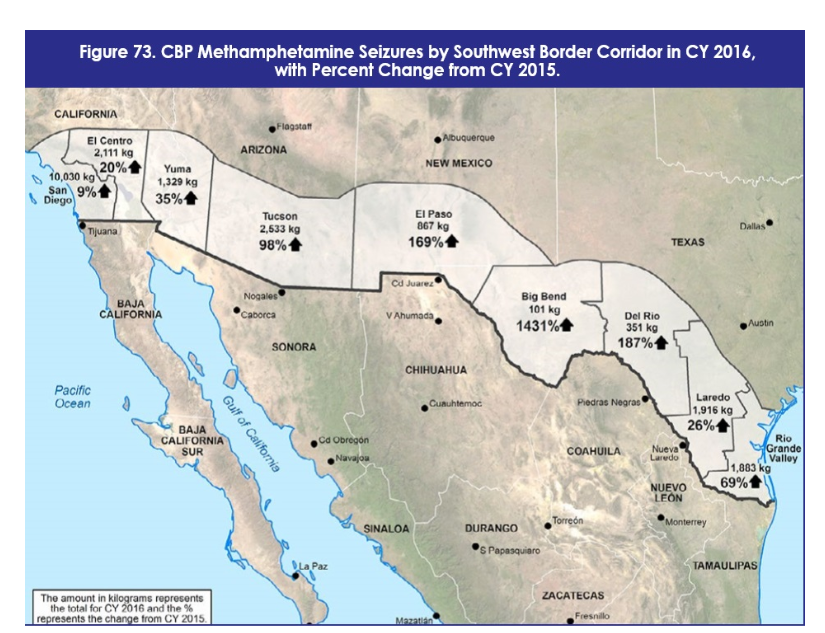 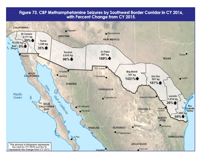 DEA records show an increase in meth seizures in the U.S. along the Southwestern border between 2015 and 2016.

TUCSON — Prescription opioids in Arizona accounted for 482 deaths in 2016, but the top threat to the state remains the presence of illegal meth.

The federal Drug Enforcement Administration in Phoenix identifies methamphetamines as the No. 1 drug threat in Arizona over opioids due to the increase in seizures seen by enforcement personnel in the state, said Erica Curry, a DEA spokeswoman.

While about 431 million opioids were prescribed in 2016, “enough for every man, woman and child in the state to have a two-and-a-half-week supply” according to Arizona Governor Doug Ducey, an influx of methamphetamine near the border has risen nearly 100 percent.

The DEA’s 2017 National Drug Threat Assessment stated that Arizona’s proximity to the border is a primary concern for the prevalence of methamphetamines.

The entire Southwestern Border — extending from California to Texas — has seen an increase in methamphetamine seizures since 2015.

The Arizona Department of Health Services, which published the reasons for emergency visits in Arizona, said 14,607 visits were related to amphetamines and psychostimulant-related emergencies — an increase of 2,515 visits since 2014. Opiate-related visits totaled 12,983 in 2015 — an increase of 563.

Ducey has directed $10 million toward more opioid treatment programs for Arizonans and created an Opioid Epidemic Act to prevent abuse of opioids.

Javier Herrera, planning chief at the Pima County Health Department and former coordinator with the Meth Free Alliance, said opioids are just one side of the substance abuse problem and methamphetamines should not be forgotten.

“Our areas of major focus need to be resourced adequately: opioids and methamphetamines,” Herrera said. “Those are the two areas that have the highest rates of overdose according to our medical examiner’s data.”

In Arizona’s two largest counties, Maricopa and Pima, the number of meth-related overdoses continues to rise.

The Pima County Medical Examiner’s annual report recorded methamphetamines as the primary illicit drug being used by citizens in 2016.

Pima County, with 1.1 million residents, is the second largest county in Arizona. In 2016, a total of 263 deaths were attributed to drug overdoses.

Opioids contributed to 175 of the county’s overdose deaths, 67 percent of the total. Methamphetamine deaths in the county increased since 2014, from 59 to 79 deaths in 2016.

Chief Medical Examiner Gregory Hess said methamphetamines have trended upward in the county for the past two years.

Opioids are the leading cause for overdose deaths, but the lasting effects of meth have led to more crimes and the number of prisoners in jail, he said.

The Arizona Department of Corrections said 4,829 prisoners were incarcerated for trafficking or possession of methamphetamines, accounting for 51.5 percent of drug-related offenses, in their 2016 Drug Sentencing in Arizona report.

Maricopa County, with the largest population of Arizonans at 4.2 million, has seen an increase in both methamphetamine and opiate-related emergency room visits, according to the Arizona Department of Health Services 2016 report.

Since 2013, meth continues to be the common illicit drug involved in treatment episodes in Maricopa County, department of health’s drug trend report said.

Clint Hickman, a Republican member of the Maricopa County Board of Supervisors, was one of the few appointed members with the Arizona Meth Project in the mid-2000s, designed to eliminate misconceptions about the drug.

He applauded Gov. Ducey’s efforts to battle opioids but also said it’s important to remember other prevalent drugs such as meth and heroin.

Herrera, who has helped combat the use of meth in Tucson, believes there shouldn’t be a stigma that substance abusers can’t be treated.

“I’ve worked with many individuals that were in recovery and their stories tells quite the opposite, Herrera said. “Recovery is possible. You just need to give them the necessary resources, give them the opportunity, give them the time they need to recover and recovery can happen.

Shaq Davis is a reporter for Arizona Sonora News, a service from the School of Journalism with the University of Arizona. Contact him at smd3@email.arizona.edu.

2 in Maricopa arrested for transporting meth with intent to sell

Couple sentenced for transporting drugs with their children to CG

Suspect in Pinal chase throws meth out window before arrest

Women arrested for trying to smuggle $450K in drugs at border