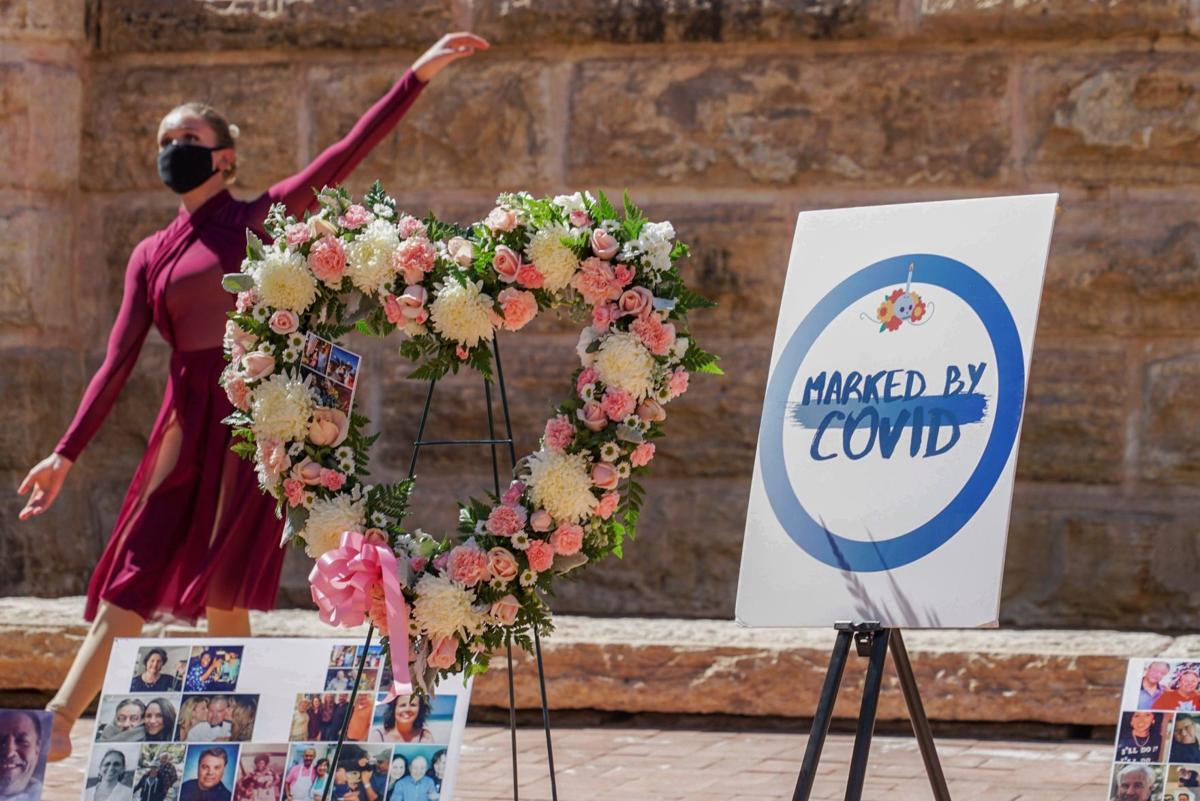 Marked by COVID, in partnership with the Floral Heart Project, host a floral artwork installation and digital display Monday at the Arizona Heritage Center. (Photo by Sierra Bardfeld/Cronkite News) 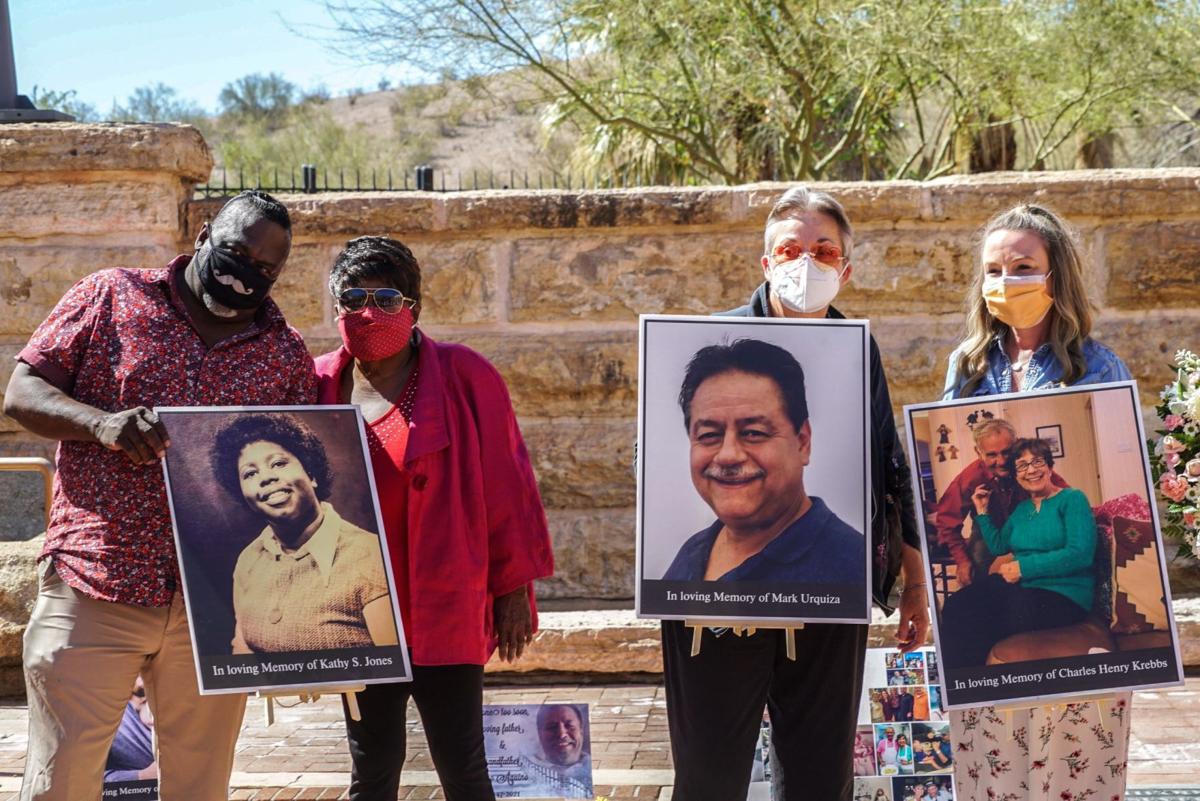 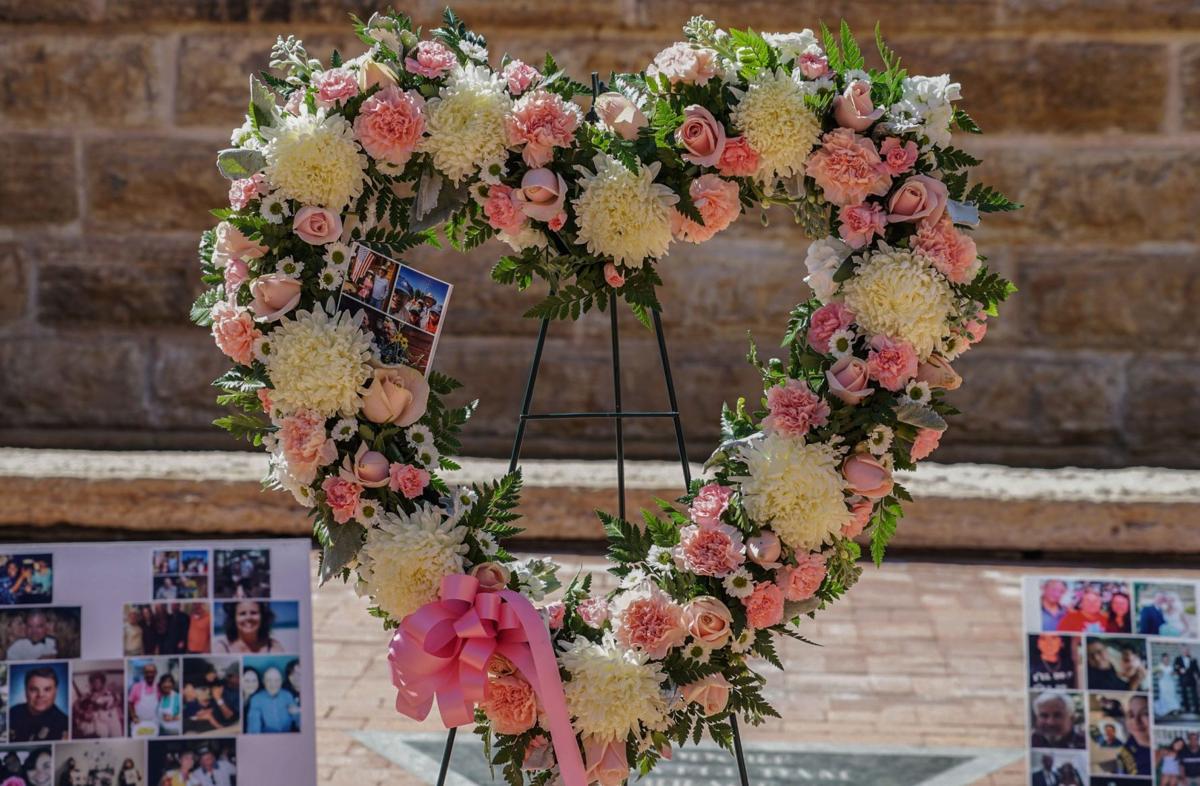 Pictures of some of the 16,000 Arizonans who have died of COVID-19 are displayed in the courtyard of the Arizona Heritage Center in Tempe. (Photo by Sierra Bardfeld/Cronkite News)

Marked by COVID, in partnership with the Floral Heart Project, host a floral artwork installation and digital display Monday at the Arizona Heritage Center. (Photo by Sierra Bardfeld/Cronkite News)

Pictures of some of the 16,000 Arizonans who have died of COVID-19 are displayed in the courtyard of the Arizona Heritage Center in Tempe. (Photo by Sierra Bardfeld/Cronkite News)

TEMPE – More than 16,000 Arizonans have died from COVID-19 over the past year, and many survivors haven’t had the chance to properly grieve their loved ones.

As of Tuesday, 776 have died from the virus in Pinal County.

On Monday, two organizations – Marked by COVID and the Floral Heart Project – came together to help Arizonans remember and pay their respects at a public memorial at the Arizona Heritage Center in Papago Park.

The Arizona nonprofit Marked by COVID partnered with New York artist Kristina Libby, 36, to commemorate those thousands of lost lives with a visual art display called Heart Bleed, which will continue at the center through Saturday.

Heart Bleed features a 10-minute video that shows one rose petal dropping for each person who has died from COVID-19 in the state. Every two seconds in the video represents one day since the pandemic started last March. As the number of petals increases, they begin to resemble blood, which symbolizes the catastrophic number of COVID-19 deaths in Arizona.

Libby also is the creator of the Floral Heart Project, which has expanded coast to coast since she started it last year.

Other pandemic memorials took place Monday across the country, including at the White House, where flags were at half staff and 500 candles were lit, according to the AP, President Joe Biden addressed the nation in mourning.

Kristin Urquiza, 39, and Phoenix, co-founded Marked by COVID after her 65-year-old father died alone in an ICU last summer. Her father, she said, trusted elected officials who assured Arizonans it was safe to reopen businesses last year.

“The governor, the president and others were saying it was safe to go out and we had nothing to worry about if you didn’t have a preexisting condition, and my father believed them, and as a result, it cost him his life,” said Urquiza, who in August denounced then-President Donald Trump at the Democratic National Convention and blamed him for her father’s death.

She launched Marked by COVID to fight misinformation “and to also hold our elected officials accountable more on the pandemic to make sure that we are saving lives as well as centering our ongoing and long-term response to the needs of the people who have been impacted.”

Urquiza and other Marked by COVID activists have been working with Rep. Greg Stanton, D-Phoenix, to push for legislation to make March 1 COVID Memorial Day. Staton introduced that legislation Monday in the U.S. House.

“This week, Americans mourned half a million lives lost to the coronavirus – half a million family members, friends, neighbors and coworkers – and their absence in our communities is difficult to comprehend,” Stanton said in a news release. “Commemorating this Memorial Day is an important marker for all those affected by this pandemic. Long after our nation moves beyond this most grim episode, we will need to collectively recognize all those we lost and the aftershocks of what we experienced.”

Libby began her Floral Heart Project last April in her kitchen. On Monday, more than 100 floral hearts were laid from Blue Hill, Maine, to Carlsbad, California, to commemorate the more than 513,000 Americans who have died of COVID-19.

Libby’s gesture to show compassion for those who have lost loved ones started with $500 worth of flowers from Trader Joe’s, she said.

“I began playing with the flowers in my kitchen and began making this really long floral heart garland,” she recalled. “I took it to a local park in Brooklyn and I had a hat, gloves and my mask on and I was so worried I was doing something illegal and I went and put this heart down. I took one little picture and I walked away. I turned around maybe about 50 feet away and then I saw this runner see it, turn all the way around, come back and stand at it and look at it.

Tara Krebbs, 41, of Glendale, started volunteering as an activist with Marked by COVID after her father died in August. She said she hopes March 1 will become a beautiful day in Arizona history.

“When we come together as a community and we work together we can do good things,” Krebbs said. “Even though we are still working through this pandemic, we can show people that we are here as a community, we grieve together and we recognize everyone that has been affected by it.”

The displays at the Arizona Heritage Center will allow for a socially-distanced, mask-enforced gathering for victims and survivors of the pandemic.

“Most of the time people would have the opportunity to make a really beautiful funeral, to have this really beautiful monument and experience their loss, and people didn’t get to have that,” Libby said. “So creating beautiful things in tribute to the people we have lost is important because everyone’s life was beautiful.”