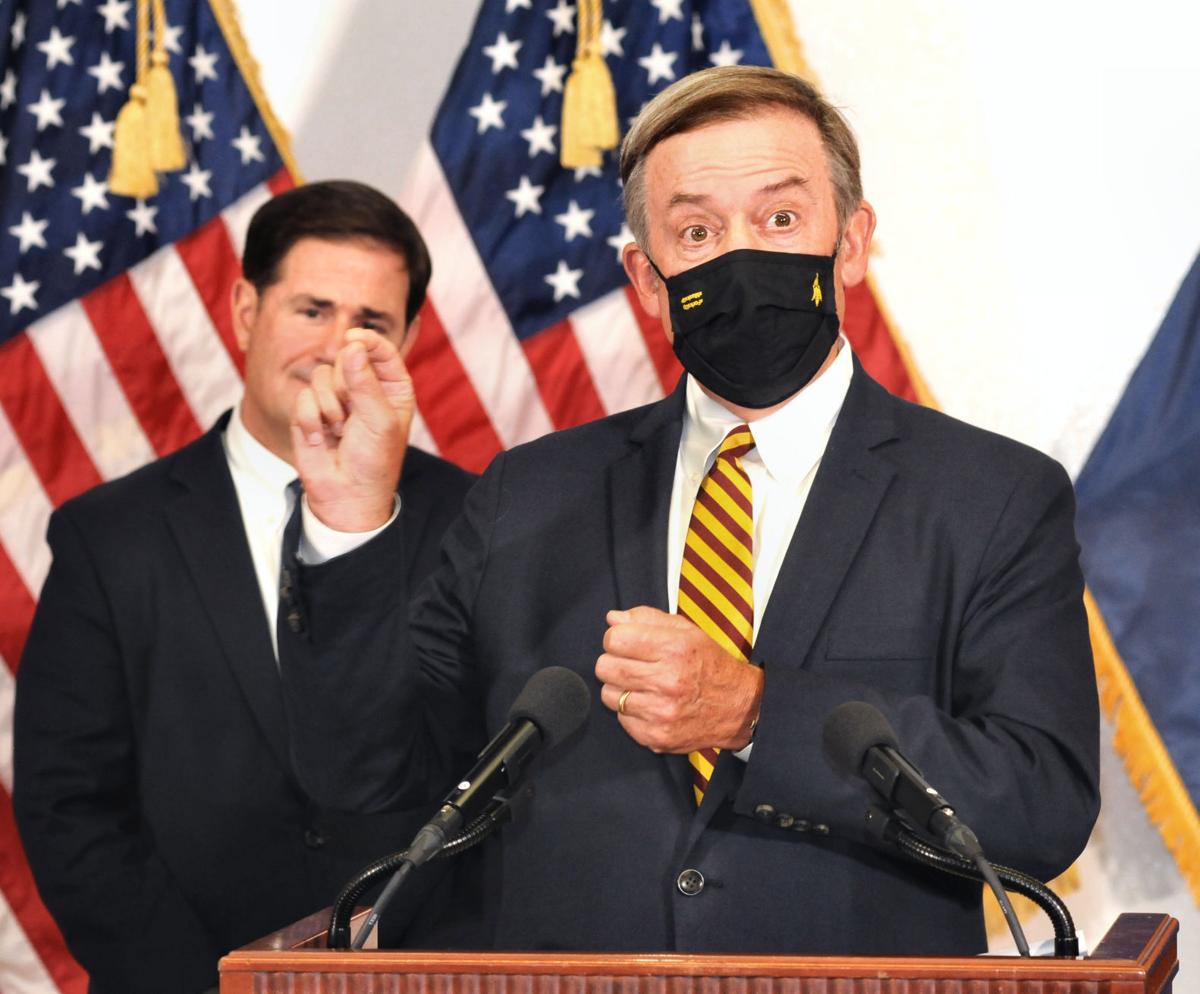 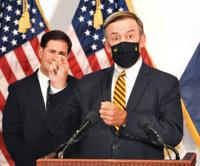 With Gov. Doug Ducey looking on, Arizona State University President Michael Crow talks about the development of a virtually instant test for COVID-19 Thursday during a press conference in Phoenix.

With Gov. Doug Ducey looking on, Arizona State University President Michael Crow talks about the development of a virtually instant test for COVID-19 Thursday during a press conference in Phoenix.

PHOENIX (AP) — Arizona will provide the state’s three public universities with $14 million in additional funding to boost their efforts to test, track and respond to the coronavirus, Gov. Doug Ducey announced Thursday.

The money will help the universities, which combined have more than 190,000 students, build on their current efforts to track and contain the virus, both on campus and across the state. The schools receiving the funding are Northern Arizona University in Flagstaff, Arizona State University in Tempe and the University of Arizona in Tucson.

The governor said $6 million of new cash will be used by ASU to develop a rapid new “point of need” test for the virus.

“With point of need testing Arizona’s first responders, health care workers, people in congregate care settings and others will be able to be tested and get their results not in days or hours but minutes,” Ducey said. “These investments are critical for helping our communities stay safe and healthy.”

ASU President Michael Crow said it would likely take six months to develop a prototype of the test. It would use a small handheld device equipped with microchips and chemistry sets to test saliva from potentially infected people.

“That then communicates with your cell phone, you get the green light, you go to school, you go to work, you go to the game,” Crow said.

Crow noted that although the test would go first to front-line workers, the virus is likely to be a staple for the foreseeable future, and the goal is to eventually make the rapid test universally available.

“This is a permanent introduction of a new virus to the human ecosystem and we’re going to be dealing with it for a long time,” he said.

The money will also help expand wastewater testing, which the University of Arizona used last month to identify a small outbreak in a dormitory and quickly test and isolate two infected students before the outbreak spread.

The new funding was announced as Arizona hospitals continue to get a break from the influx of coronavirus cases that nearly overwhelmed their ability to care for patients early in the summer, but new case counts are again edging up.