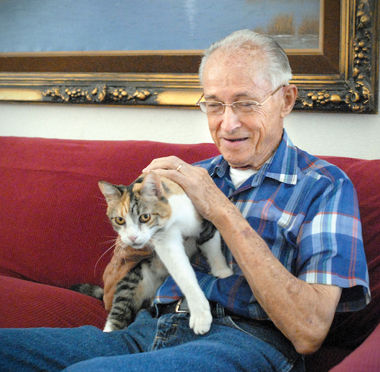 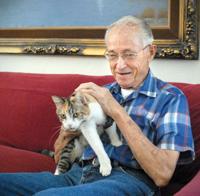 Pastor Jim Mumme plays with his cat, Rocket, at his home in Arizona City. 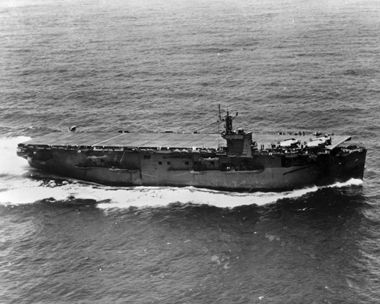 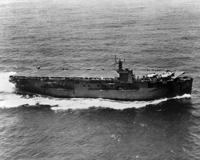 The USS Nassau flight deck is shown from a pilot’s view. The ship was only 496 feet long. 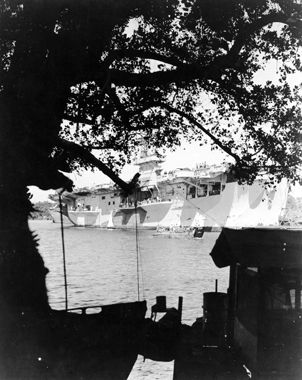 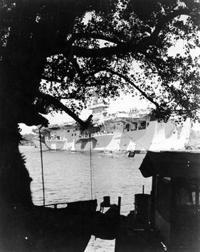 The USS Nassau is shown docked in Guam with the flight deck positioned on top of what had been a regular cargo ship.

Pastor Jim Mumme plays with his cat, Rocket, at his home in Arizona City.

The USS Nassau flight deck is shown from a pilot’s view. The ship was only 496 feet long.

The USS Nassau is shown docked in Guam with the flight deck positioned on top of what had been a regular cargo ship.

A man who served in World War II before founding 10 churches in four countries is being honored next week with a trip to Washington.

Pastor Jim Mumme and grandson Trevor Rhodes are part of a group of 26 World War II veterans and escorts who met early yesterday, May 26, at Phoenix’s Sky Harbor Airport, to have breakfast together and fly to Baltimore, courtesy of Honor Flight Arizona.

Today, the veterans will tour the U.S. Capitol Building, the World War II Memorial, the Vietnam, Lincoln and Korean memorials, the Iwo Jima Marine Memorial, Arlington National Cemetery, the Air Force Memorial and historic Fort Myer together. Tomorrow they will visit the Fort McHenry National Monument and Historic Shrine and return to the Baltimore Airport for the flight back to Phoenix.

“It’s about honoring these World War II veterans and making sure they are applauded and appreciated and thanked for what they did,” said Susan Howe, who founded Honor Flight Arizona in 2008.

Mumme, who turned 89 on May 17, said he was 18 in 1944, when he joined the U.S. Navy. After basic training in San Diego, he learned the International Morse Code and trained to operate and repair long-distance radio equipment at the U.S. Naval and Marine Corps Reserve Armory in Los Angeles.

He was assigned to the USS Nassau, a 496-foot-long cargo ship that had been converted into an escort aircraft carrier.

“Towards the end of the war, we almost ran out of aircraft carriers,” Mumme explained. Only three survived the war. “All the rest had been destroyed, sunk.”

The Todd Shipyard in Tacoma, Washington, added a flight deck to the Nassau to turn it into a small carrier.

“There were two elevators,” Mumme said, “one forward, one aft, to bring the planes up” from the lower decks to the flight deck. The planes had folding wings, so the Nassau could hold 80 planes between the landing and barge decks.

The escort aircraft carriers first were used to defend ships and convoys of ships from submarine attacks and floating mines, he said. Later they were involved in the invasion of the Japanese-held Pacific Islands, including the battle for the U.S.-owned Aleutian Islands and the Battle of the Philippine Seas, which eliminated most of Japan’s remaining aircraft carriers.

“Our ship was in several of those,” he said. “I was not on the ship at the time.”

By the time Mumme was on the Nassau, it was transporting injured sailors and equipment between Hawaii, Guam, Manus, Samar, Saipan and California, refueling other ships and helping in the battles for the Marianas, Iwo Jima and Okinawa.

Mumme said he was a radioman and one day took a message that said a large group of Japanese bombers were headed toward the Nassau, which was anchored at Tacloban City in the Leyte Gulf, Philippines.

Mumme ran to the captain’s quarters. “And I expected him to sound ‘General Quarters’ and we would all go to our battle stations, but he didn’t.”

Mumme went to his battle station, a 20 mm anti-aircraft gun, and waited for the order.

“And as I was standing there, all of a sudden I saw, belching from our ship’s smoke stacks, the densest, blackest smoke that was possible.

“In one minute’s time it was so dark over the ship that you couldn’t see across the flight deck.”

Twenty other ships were putting up smoke, too, and the Japanese planes flew back and forth for a while, then left.

Mumme said he was afraid the planes would drop their bombs on the city, but the smoke screen had been so large, it had covered Tacloban, too, saving thousands of lives.

After the war, Mumme returned home to Phoenix, where he and his fiance, Vida Robinson, received Christ as their savior and were called to be missionaries. They married, served together and raised their children in Bolivia, Mexico and Chad, while starting churches there and in Arizona. The last church they started was the Evangelical Methodist Church on Overfield Road in Arizona City. Vida died in December.