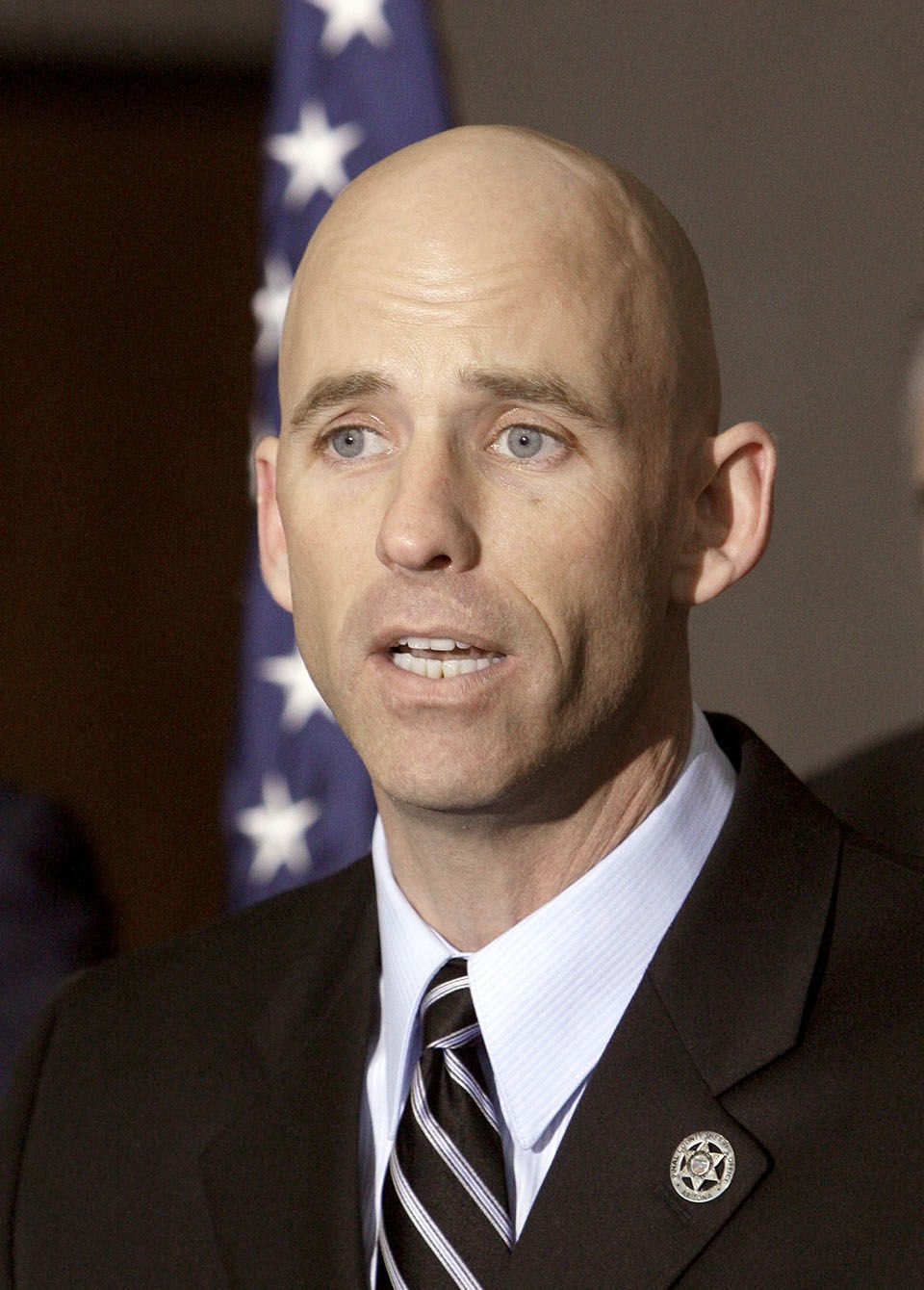 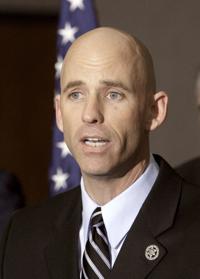 In this Jan. 13, 2010 file photo, Pinal County Sheriff Paul Babeu speaks during a news conference as he pledges his support for then-candidate for governor Republican Dean Martin, Wednesday, Jan. 13, 2010, in Phoenix. Babeu has been the sheriff for less than two years, but is already emerging as a leading border security proponent and a rising star in the Republican Party. (AP Photo/Ross D. Franklin, File) 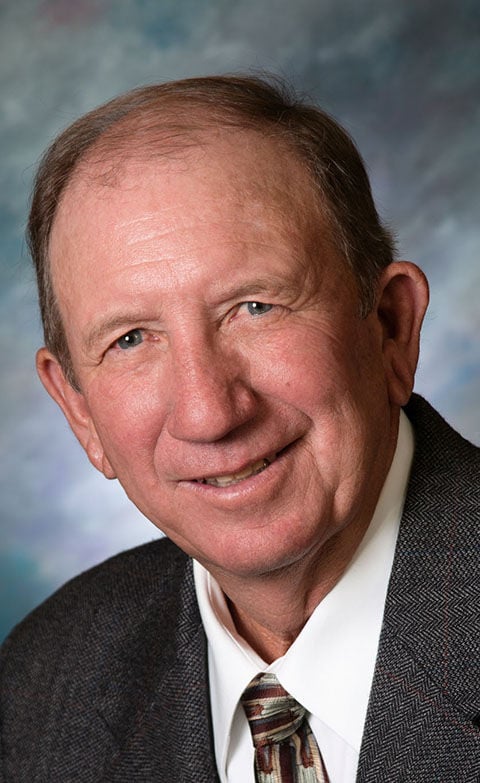 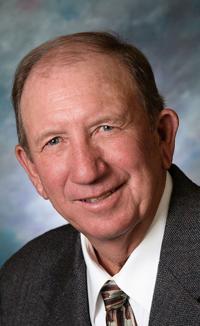 In this Jan. 13, 2010 file photo, Pinal County Sheriff Paul Babeu speaks during a news conference as he pledges his support for then-candidate for governor Republican Dean Martin, Wednesday, Jan. 13, 2010, in Phoenix. Babeu has been the sheriff for less than two years, but is already emerging as a leading border security proponent and a rising star in the Republican Party. (AP Photo/Ross D. Franklin, File)

FLORENCE — The Pinal County Sheriff’s Office has denied that it is the target of an FBI subpoena served last week, but the department has ties to the organization that is the subject of the federal investigation.

The Arizona Public Safety Foundation was first incorporated as the Pinal County Sheriff’s Office Justice Foundation in 2007 and later dubbed simply the Pinal County Justice Foundation before making its most recent transformation in 2010. The nonprofit organization was housed within PCSO for a time, and both past and present board members have been employed by the department, including current member and deputy Erik Larsen.

AZPSF was founded under former Pinal County Sheriff Chris Vasquez, who told the Maricopa Monitor last year it was created as a way to give local donors a tax ID number for write-off purposes. It was to remain separate from PCSO with its board of community members and zero oversight from Vasquez.

“There was not supposed to be any public money into that foundation, meaning tax dollars, grant money or RICO money,” he told the Monitor at the time. “It was created solely to receive donations from outside sources.”

Vasquez’s affiliation with the foundation ended after his 2008 re-election bid fell to current Sheriff Paul Babeu, and now, AZPSF deeply contrasts to Vasquez’s initial vision for the foundation.

Perhaps most significantly, his sentiment that it was not intended to receive RICO funds, or seized criminal money, is no more.

The foundation has received RICO checks in amounts both modest and significant. Earlier this year, it received $500 for what records detail as a “cops car show,” while 2014 saw more robust contributions with three checks cut for the San Tan Valley Family Advocacy Center totaling $427,027.

Hundreds of thousands of dollars have passed from RICO coffers to AZPSF for what has largely been characterized broadly as “community outreach” or “anti-drug/anti-gang” activity. Yet equally general descriptions of where that money goes makes it difficult to track how the funds are ultimately used.

The foundation uses the same 990 form as any other 501(c)(3). The difference here is the lack of specificity has caused concern among watchdogs, including the conservative Goldwater Institute and the American Civil Liberties Union.

As far as the ACLU is concerned, RICO funds and the procurement thereof have been at the root of abuse not just in Pinal County but across Arizona.

A lawsuit filed in July 2015, however, specifically focused on the county. In doing so, it questioned the extent of the relationship between AZPSF and PCSO, especially in relation to the sheriff himself.

“At a minimum, it seems that by funneling money to a private group which buys things for him and his department, Defendant (Sheriff Paul) Babeu is able to avoid procurement laws and other transparency regulations which usually apply to government purchasing,” according to the ACLU’s complaint.

The complaint goes on to say the foundation received roughly 86 percent of its funding through PCSO’s RICO fund in 2013, and another 13 percent came from other sources within the department. And much like its most recent filing, the 2013 990 shows a hefty sum of its expenditures going to “all other expenses” — $91,906 was spent that year on expenses that may have been perfectly legitimate but for their undefined nature.

The end result of this ambiguity has left plenty of room for questions, but from Babeu’s perspective, it’s all politics.

“Another day, another smear,” he said in a statement to the Dispatch.

“Clearly, there’s a political agenda afoot,” Babeu told KNST host Garret Lewis Thursday. “Sadly, in a political environment, all these attacks, all these questions come out before an election. You don’t have to be a cop to figure this out, what’s going on here.”

And that political scuffling has apparently extended to the federal authorities: Babeu went on to say the FBI has washed its hands of wrongdoing by Democratic presidential candidate Hillary Clinton but has pursued the RICO affair despite his transparency on the matter.

It’s unclear if he meant that information is available on PCSO’s website or his campaign’s, but neither features documentation of applications for RICO funds received, denied or approved. In fact, the Casa Grande Dispatch had to view such documents in person at the department’s headquarters in Florence; the Pinal County Attorney’s Office provided the documents on discs for a fee.

The only document freely available online pertaining to PCSO’s tracking of RICO disbursement is a downloadable table of organizations that have received funding since 2009, and when compared to records obtained by the Dispatch, even that list is incomplete.

RICO fund rules not meant to be broken

RICO funds are hardly a sparkling new point of contention in Pinal County.

One county official has certainly been around the block on the issue, drawing complaints of a political agenda as he often inspires discord with Babeu — a tense relationship that makes sense considering the former’s influence over the latter’s budget.

That man is Republican Pinal County Supervisor Steve Miller, and he also happens to have been a key source confirming the issuance of the FBI’s subpoena on AZPSF.

Miller saw the subpoena for himself as a copy made its way to the county, and it came as no great surprise.

He said RICO money has been awarded to AZPSF to be spent on things that may have been questioned if Babeu had tried to spend those monies directly out of the RICO fund.

He first offered this mild example: Money might be given to the foundation and used to buy tickets to a ball game that are then given to an officer’s family and friends.

That seemingly harmless example is hardly the extent of Miller’s suspicions and those of watchful eyes.

At the heart of the issue is the idea that RICO monies given to AZPSF have been used to fund Babeu’s campaign for Arizona’s 1st Congressional District seat. He won the Republican nomination in the August primary and will face former state Sen. Tom O’Halleran on the Democratic side of the ticket in November.

Miller has noted evidence of what he considers roundabout campaign spending through the foundation. For example, AZPSF created public safety announcements that were played at movie theaters featuring Babeu and Pinal County Attorney Lando Voyles. They would not have been allowed to create those ads using county money because they appear to be campaign tools, Miller said, so RICO money was funneled through the foundation to fund them instead.

“For lack of a better word, it was a laundering scheme,” he said, “so that they could spend money on things that may have not been permissible directly through the rules. But because they gave it to this foundation — a nonprofit supposedly doing good for public safety — they circumvented around (the rules).”

Miller admits some of his examples may be nit-picky, but the rules governing the use of seized criminal funds were not meant to be broken.

RICO funds typically refer to money obtained through anti-drug or anti-gang, collectively called anti-racketeering, efforts as well as civil forfeiture. Put simply, they are intended to be applied to further anti-racketeering activities, such as substance abuse education programs or training for law enforcement.

Their use should clearly reflect that intention, but the language of the law is so — as one expert has called it — “loosey goosey” that documentation of their final purpose is as broad as AZPSF’s expenses.

The rules apply not only to the foundation but also to any organization receiving RICO funding — or so they should, according to Miller, even when wholesome youth groups are involved.

“Because I questioned it, I’m the bad guy,” he said of Babeu’s accusations of politics at play. “I’m supposed to play nice?

“Yes, I am critical of the operation, and that has made me public enemy number one. … Now, I can’t be trusted.”