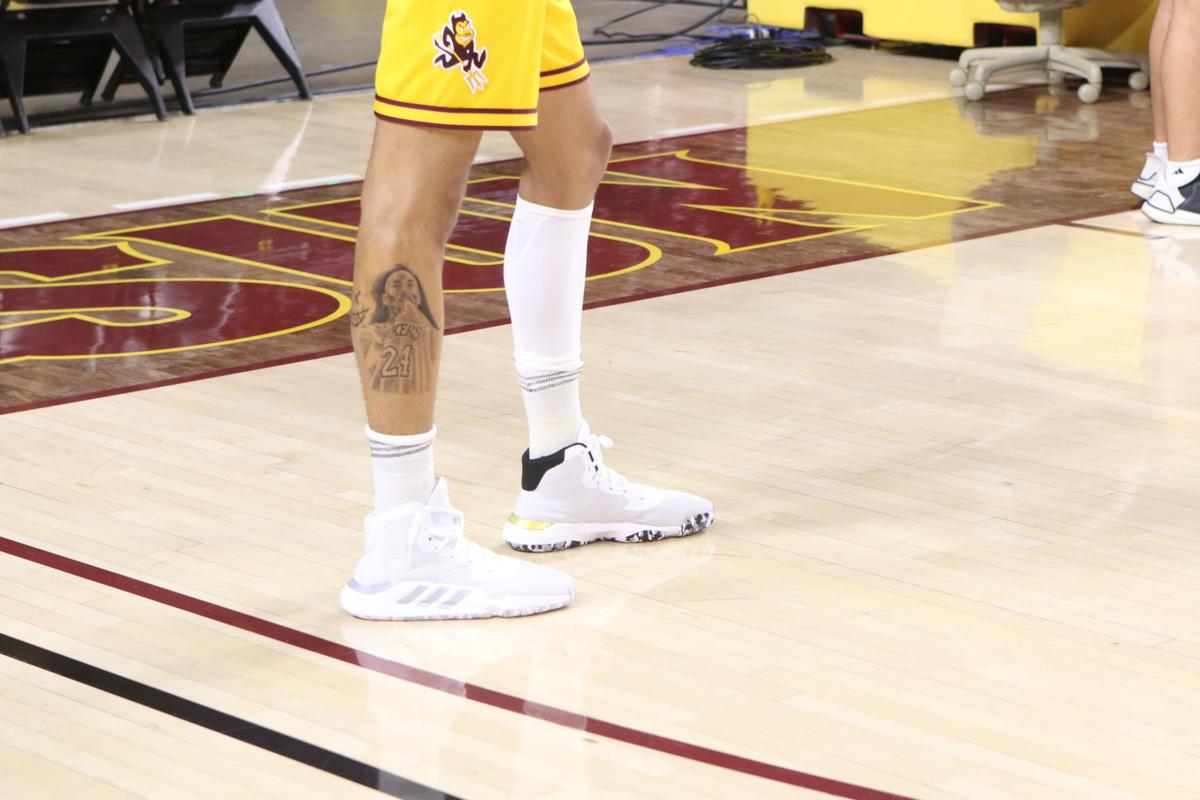 Arizona State freshman Jalen Graham got a tattoo of Kobe Bryant after learning about the NBA standout’s death in a helicopter crash in January. (Photo by Edith Noriega/Cronkite News)

Arizona State freshman Jalen Graham got a tattoo of Kobe Bryant after learning about the NBA standout’s death in a helicopter crash in January. (Photo by Edith Noriega/Cronkite News)

TEMPE – Arizona State freshman Jalen Graham wears a piece of his heart on his Sun Devils jersey. The 6-foot-9, 205-pound forward has donned Kobe Bryant’s No. 24 since he was at Mountain Pointe High School in Phoenix and continues to wear the number of his favorite player while at ASU.

But as Graham stood with his back against the wall answering questions from reporters, another tribute to Bryant was in view.

“I had to,” Graham said of getting the tattoo right after learning of Bryant’s death from a helicopter crash that also took the lives of Bryant’s 13-year-old daughter Gianna and seven others on Jan. 26 in California.

“There’s a guy that tattoo’s Melo (Romello White), and you already know Melo is tatted up,” Graham said, laughing. “I went to his tattoo artist and he hooked me up.”

The Phoenix native said Bryant was a big inspiration to him growing up and he remembers watching with his family as Bryant hit his 2009 buzzer-beating 3-point bank shot over Dwyane Wade of the Heat.

“I always watched his (Bryant) game and I always loved him,” Graham said.

Despite wanting to go to college in California, Graham said he chose to stay close to home because of his twin sister, Jenah, who he describes as the yin to his yang.

“I decided to stay here, and I love every moment of it,” Graham said.

The freshman has since made the transition from high school to college look easy.

In ASU’s 81-71 season-opening loss to Colorado in Shanghai, China, Graham got the start over White, who was suspended for violating team rules, and recorded a team-high five blocked shots.

“He’s got great upside,” ASU coach Bobby Hurley said. “You’re not sure how physically he’s going to be able to handle himself first versus older, more physical guys. But he’s been up for the challenge, and he’s had some really good moments in the preseason that would indicate that he would be ready going against Romello (White) and Zo (Verger Jr.).”

He started again in a 90-49 win over Central Connecticut State at Desert Financial Center and finished with 10 points, three assists and three steals.

The biggest surprise for him so far? “Just how physical it is,” Graham said.

“Just watching the game (and Washington’s) Isaiah Stewart, a freshman 250 (pounds),” Graham said. “I was just … wow! The guards are way better. When I used to be in high school, I could block pretty much every shot. But they know how to finish now. It’s a little difficult now.”

Still, his 21 shot blocks rank only behind White’s 27 for ASU this season.

In Graham’s last three game appearances he has focused on perimeter defense and lateral movement rather than scoring.

While Graham still has a lot to prove on a veteran squad, encouragement from Hurley to play with freedom and confidence is easing the way.

And his body-art game is hard to beat, even by the veterans. Graham is basking in his new additions – a tattoo dedicated to his aunt who passed away, a wolf to represent his Oregon roots and his new Kobe-dedicated image.

“I’m done after that,” Graham said, laughing again. “My mom is getting mad.”