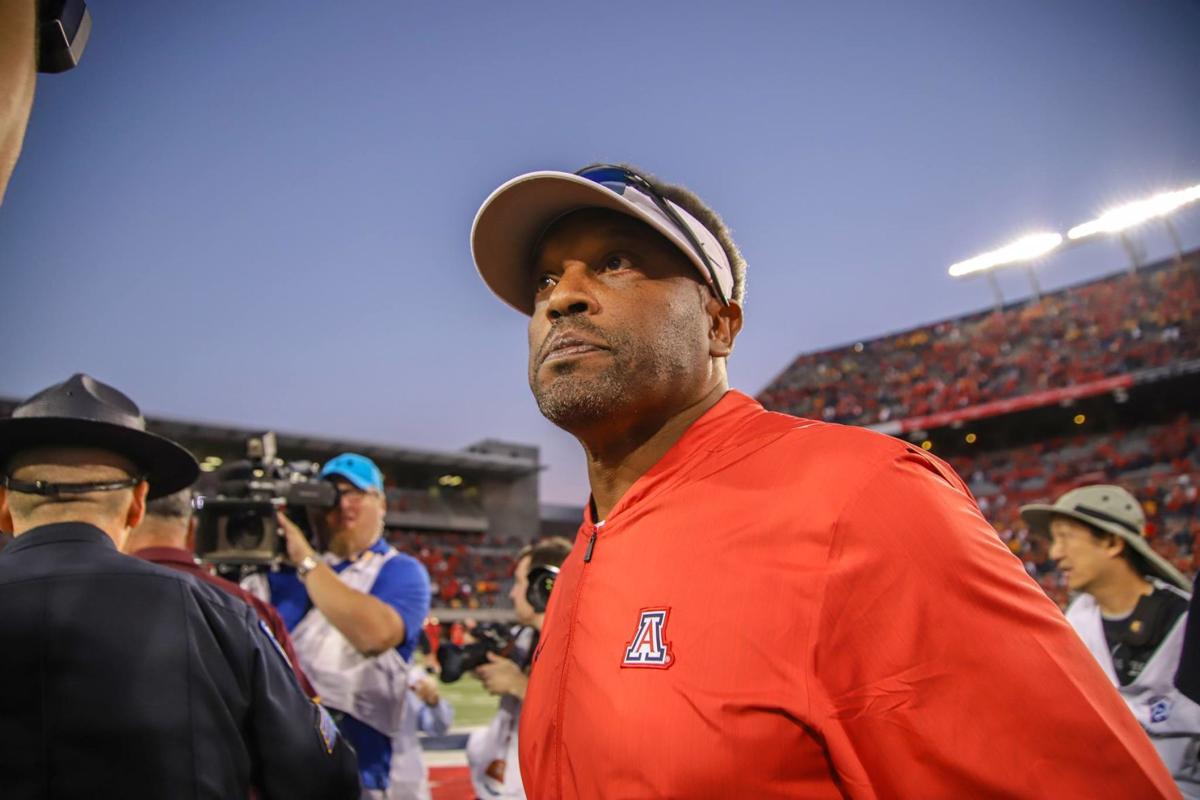 Arizona coach Kevin Sumlin felt inspired to issue a statement about the protests around the country and racism this nation has experienced. 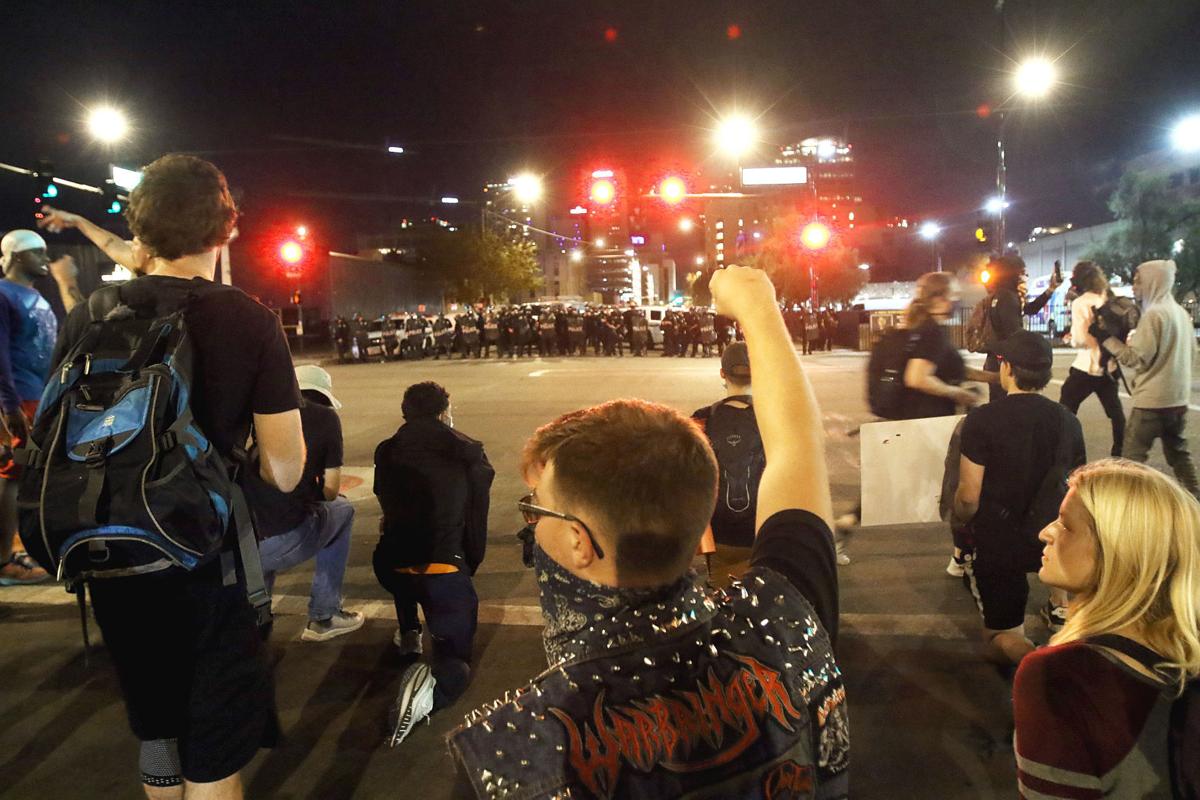 Protesters take a knee in front of Phoenix police officers in riot gear at the corner of Adams Street and Seventh Avenue near the Phoenix Police Deparment headquarters on Saturday in Phoenix.

Arizona coach Kevin Sumlin felt inspired to issue a statement about the protests around the country and racism this nation has experienced.

Protesters take a knee in front of Phoenix police officers in riot gear at the corner of Adams Street and Seventh Avenue near the Phoenix Police Deparment headquarters on Saturday in Phoenix.

PHOENIX — Unrest over George Floyd’s death continues to spread, prompting reaction from many, including those in the sports world. In Arizona, the only state in the country with African-American coaches overseeing an NBA team and two Power Five football teams, coaches at all levels are feeling a responsibility to speak up in a sports world that often shies away from throwing social or political issues into the mix.

“I think people have to realize that this isn’t new,” said Tony Darden, an assistant basketball coach at Mesa High School and then former head coach at Desert Vista. “I feel like I’m at a stage in my life now where I have more of a voice than I ever have, so it’s important for me to speak out. If people see me speaking out, then they’ll have the courage to do it as well.”

Darden’s comments came on the heels of Suns coach Monty Williams and Arizona football coach Kevin Sumlin issuing statements about the protests around the country following Floyd’s death in Minneapolis after a confrontation with police.

Mesa Skyline High School coach George Hawthorne, a former sheriff with Maricopa County, believes that the discussion of perceived police brutality against African-Americans is something that’s relevant across generations.

His experience in law enforcement has raised the curiosity of his players. He was a sheriff for 25 years and a captain for 15. They have often asked him his perspective of being an African-American and a former police officer.

“The kids have a curiosity about police work. They know my background,” he said. “They often ask my opinion on things that come up in society, and I’m sure when we get back together, their curiosity will again take hold.”

Hawthorne emphasized the importance of students of all races to join in on the conversation.

“It’s not just black students. This dialogue needs to occur with every student because we need empathy from other populations in order for this problem to end,” Hawthorne said.

Sumlin, who was born during what he described as “the heart” of the civil rights movement in 1964, had received calls from many of his players who were seeking answers for an issue that he said is much bigger than one man or death.

“When I look at my football team, a true melting pot of diversity, I am buoyed by their thoughtfulness, their desire to do better and their willingness to demand change. Perhaps this generation will be the ones to fundamentally ensure social justice in America,” Sumlin wrote in a message he put out on social media.

The Suns’ Williams wrote in a letter to the public that “ I’m angry. I’m afraid. And I’m in pain.”

Race and sports have long intersected.

In 2014, Donald Sterling was banned from the NBA for life and was forced to sell the Los Angeles Clippers after a leaked recording of him on a racist tirade toward African-Americans enraged the basketball world.

Later that year, LeBron James and many other NBA players wore shirts displaying the quote “I can’t breathe,” the words of Eric Garner, who suffocated and died after a New York police officer put him in a chokehold.

In 2016, San Francisco 49ers quarterback Colin Kaepernick decided to take a knee during the national anthem to protest police brutality against African-Americans. Kaepernick’s protest was highly polarizing – many supported him while others accused him of disrespecting the military and the American flag. Upon conclusion of the 2016 season, Kaepernick became a free agent and has not been signed.

And in 2020, Floyd uttered the same words as Garner while a police officer knelt on his neck for six minutes, and would share the same fate.

Kaimarr Price, coach of the Mountain Pointe High School men’s basketball team, said that every African-American he knows has at least one anecdote of discrimination.

“It’s heartbreaking. You live in a world where I and every black adult has a story of facing police discrimination and any sort of racial discrimination,” he said. “I’m about to have a daughter at the end of the year, and I have some nephews, and they will all have a story (eventually).”

Price disagrees with the notion that those involved in sports, at any level, should stick to sports and avoid talking about social justice and politics.

“For the most part, I believe we’re human beings before we’re whatever profession we have. (Stick to sports) comes from a place of assuming we’re not educated on the topic,” Price said. “You wouldn’t tell a doctor not to speak on this topic. Anybody with any sort of a platform should be speaking up right now.”

Price doesn’t shy away from having tough conversations with players.

“I am 30 years old, so I’m close enough in age to the kids I coach, we have a lot of common ground we can relate on …” Price said. “I’ve had a couple players reach out during this time, both white and black. It’s good to listen to them and hear their thoughts.”

Darden believes that using his voice is important for being a coach and being a leader to his players.

“We all want to be strong for the kids that we coach, and so just to have these conversations, it’s just so enlightening and eye opening …” Darden said. “The coach’s responsibility is one of the main factors when it comes to these kids. At the end of the day, the athletes look up to the coach for playing time, for guidance on the court, and that should be the same for these (social) issues.”

The goal for all those coaches is the same: to teach their athletes to excel not just in sport but in life. And to have empathy.

“Seek to be a more understanding person, not just in terms of race relations but just in general,” Price said. “We can all stand to listen to one another more.”

CG residents gather again to demonstrate for peace and justice

CASA GRANDE — For three consecutive nights, Casa Grande residents have gathered near City Hall with signs of peace and unity, calling for an e…