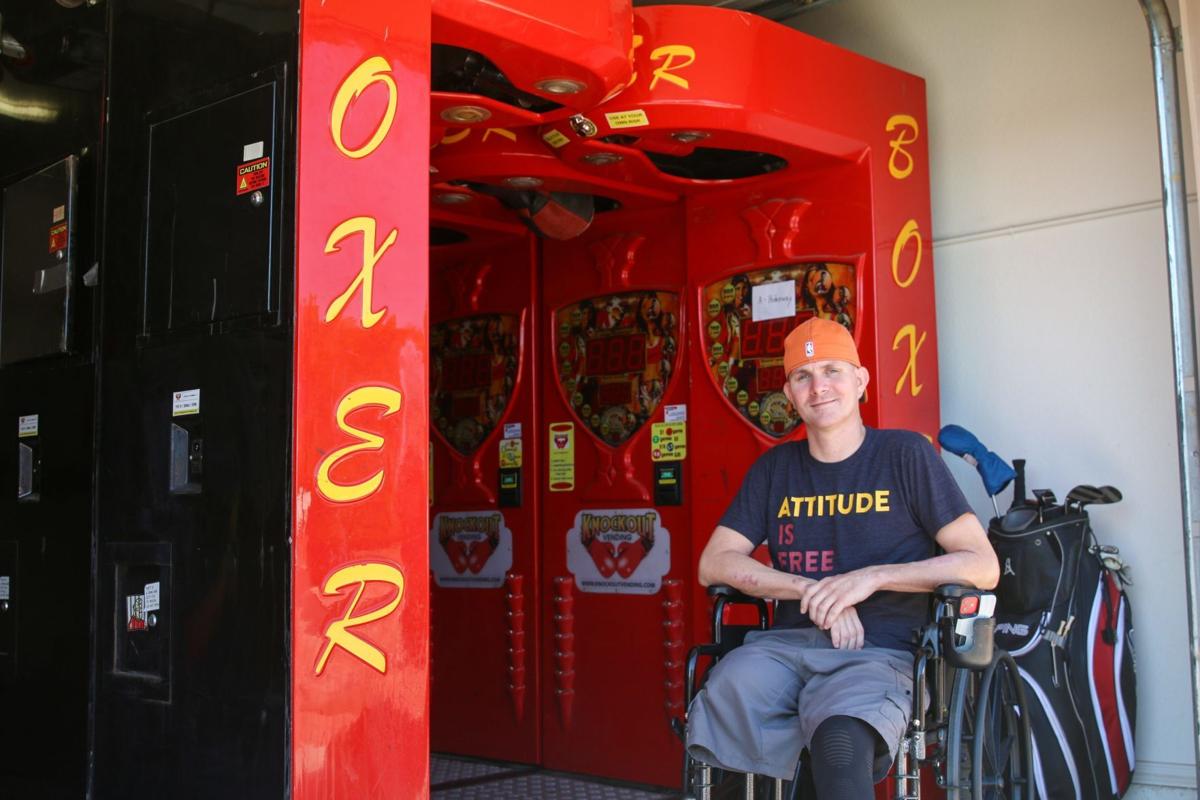 After a serious motorcycle crash that cost him his leg, David Boothe has found comfort in watching the Suns’ long postseason run. 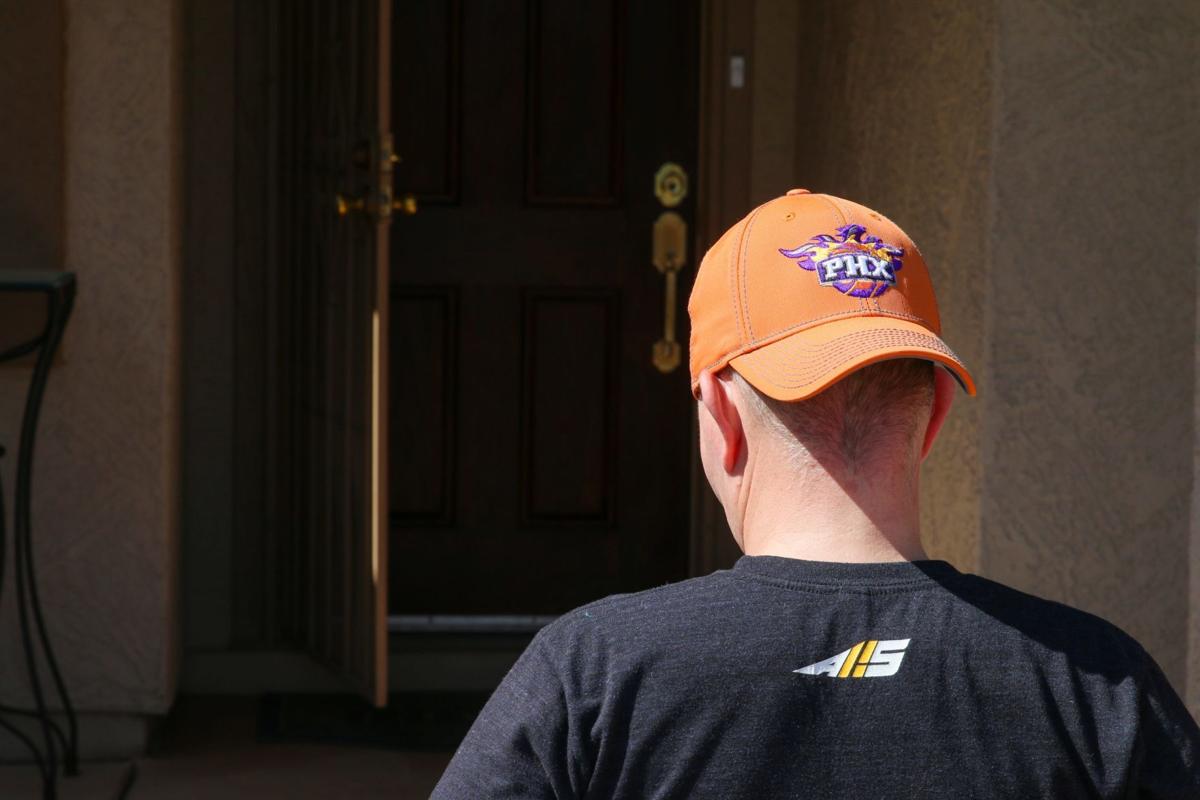 David Boothe and Suns coach Monty Williams have the same mantra: “Everything you want is on the other side of hard.”

After a serious motorcycle crash that cost him his leg, David Boothe has found comfort in watching the Suns’ long postseason run.

David Boothe and Suns coach Monty Williams have the same mantra: “Everything you want is on the other side of hard.”

PHOENIX – When Deandre Ayton slammed down his now legendary “Valley-oop” in Game 2 of the Western Conference Finals, the dunk instantly became one of the most electrifying moments of the Phoenix Suns’ playoff run this season. For one fan, it holds an even greater meaning.

“Since April 15, I’ve had an hour of no pain and half of that time is because of Deandre Ayton,” David Boothe said.

No one knows the healing power of sports better than Boothe, who has found comfort in recent months watching the Suns, who face the Milwaukee Bucks in Game 6 of the NBA Finals tonight.{span id=”more-130636”}{/span}

On April 15, Boothe was hit by a semi truck while riding his motorcycle on U.S. 60, just outside Wickenburg.

“I knew I was dead,” Boothe said. “I just shouted out real quick, ‘Lord, I’m coming home. Forgive me.’ I felt a sense of peace and acceptance.”

The next thing Boothe remembers is looking at the sky in shock as passersby tried to help him. He recalls an off-duty cop redirecting traffic, a nurse examining him and a fellow Christian praying over him. The driver fled the scene.

Boothe was transported by helicopter to Dignity Health St. Joseph’s Hospital in downtown Phoenix for treatment. There he met Dr. Jacob Duncan, an orthopedic trauma surgeon. The two became close over the next few months as Duncan worked to repair three breaks on Boothe’s right leg, one in his thigh and two in his shin.

From the moment the two met in the emergency room, Duncan knew Boothe was special.

“On the most difficult day of his life, he thanked me,” Duncan said. “It’s just not something that I commonly see.”

In the following weeks, Duncan and his team took Boothe to surgery every other day to treat his wounds and try to save his leg. Eventually, it became clear the leg was too damaged to have any, “meaningful function,” so Boothe, his family and Duncan decided an amputation was the best course of action.

Although Duncan credited his patient with an incredibly positive attitude, Boothe described the five weeks between the crash and his amputation as extremely difficult.

Boothe said one thing that helped push him through the pain is the Suns’ playoff run, and he called in to Suns broadcaster Jon Bloom’s postgame radio show after Ayton’s winning dunk. He shared on the air that a Monty Williams’ mantra – “everything you want is on the other side of hard” – had become his mantra, too.

Williams reminded the team of that mantra after their crushing Game 4 loss to the Milwaukee Bucks that evened the Finals series.

Boothe reminds himself of the mantra when he’s struggling with pain.

“I know it’s basketball but (Williams) said it’s not just basketball, it’s life,” Boothe said. “And I’m in that hard section of life. Everything I want is just on the other side.”

This isn’t the first time the Suns helped Boothe stay positive through a hard section of life.

Boothe owns Boothe Vending, which rents and maintains amusement machines in bars, so his business was shut down at the beginning of the COVID-19 pandemic.

When the Suns went on their 8-0 run in the 2020 NBA bubble, it helped Boothe remember there’s light at the end of the tunnel. Boothe has been a Suns fan his whole life.

“It seemed like each time I was really going through something, the Suns were there,” Boothe said.

To Boothe, the team this season represents leading with love. He recently watched “Hidden Figures” at a movie night hosted by Christ’s Church of the Valley. Afterward, they discussed “passing the chalk,” a metaphor the movie uses to show that good leaders know when to empower others.

Boothe said Chris Paul is the perfect example of passing the chalk. He is currently seventh on the all-time playoff assists leaderboard with 1,068 after moving into the top 10 during Game 2 of the NBA Finals. And he is a leader who isn’t intimidated by sharing the spotlight with young talents like Ayton or Devin Booker.

Boothe hopes people watching the games like him will learn from Williams’ and Paul’s example. He believes that if even one more person embraces the mentality that there’s something better on the other side of hard, this Suns season will mean something outside the realm of sports. He said his Christianity helped him understand that making a positive impact on one person is as valuable as making a positive impact on many.

Boothe noticed how much more close-knit the city of Phoenix felt both during the bubble and during this playoffs run. Bloom emphasized the importance of sports for a community during Boothe’s call.

“Even if you don’t know the fans that are sitting next to you in the arena, when the ball goes up and you guys are all cheering for the same team, it just brings you together in a way that not many things in this world do,” Bloom said. “David, with his story, I think shined the light on that.”

Along with the feeling of community brought by the Suns’ playoff run, solidarity in prayer has helped Boothe get through the bad times. He has received messages from every continent wishing him well and praying for him, he said.

In his personal prayers, he asks for guidance moving forward. Though there are times when he’s asked God to take away some of his pain, for the most part, he’s prayed that his journey can show others that even a catastrophic event doesn’t mean they won’t have more good in their lives.

“Pain is an important part of life,” Boothe said. “But I believe I’ll be better a year from now than I was a year before.”

One of the ways Boothe thinks his life will permanently change for the better is in his relationship with his parents. He’s always had a good relationship with them, but, in the time since the crash, they’ve become closer.

His parents were in Ireland with their daughter and three grandchildren at the time of his accident. They came back to Arizona as fast as they could. It took them nine days.

When Daryl and Linda Boothe finally made it to St. Joseph’s, they heard David’s voice before they saw him. The couple wept because, despite David’s injuries, bandages, and the exoskeleton on his right leg, their son was there, and he was alive.

He was more than alive. He was filled with the same spirit and attitude he’s had his entire life. David maintaining a positive outlook throughout this difficult journey wasn’t a surprise, Daryl said, but it still makes him proud.

“He has shown a lot of grit and faith and a lot of grace working with people who are trying to be of help to him,” Daryl said. “I’ve just noticed that in his character, and it’s something that I, as his father, appreciate.”

Another unsurprising aspect of David’s recovery is how the Suns have helped him through it.

Each Suns game is a family event. The Boothes order pizza, invite a few friends and spend the next few hours yelling at the TV. To Daryl, the anticipation for each Suns game, and the thrilling moments during them, have been the bright spots in this experience. If the Suns win the championship, count on a raucous celebration in the Boothe household.

Despite the team dropping three games in a row, the Boothes are holding steady. David keeps a positive outlook however the game is going.

One of David’s goals is to reach upwards of 90% of his previous abilities once he’s fitted with his prosthesis. Damon Wheeler, president of Wheeler Medical, the company making David’s prosthesis, doesn’t think David will have trouble reaching his goal.

“He will thrive because of who he is as a person,” Wheeler said. “We can easily adapt the right prosthetic and make sure he has the best technology, and the right fit and all of that, but you can put that on a person and if they don’t have the right spirit and the right mindset to take life and to excel it won’t do them any good.”

Boothe said seeing Paralympic athletes succeed helped him realize he might be able to do more with a prosthesis than with his damaged leg. Wheeler Medical is fitting him with a prosthesis that will have a microprocessor in the knee to help mimic David’s gait from before the amputation.

Until she left for Ireland in early July, Linda was at every appointment. David wants one of his first achievements to be taking a few steps to greet her when she returns in mid-August.

“His enthusiasm for recovery is pretty contagious and quite impressive,” Wheeler said. “It’s a blessing for us to be able to work with people who are such good, just positive people.”

“This is what I would consider to be a transformational experience in my practice where I’ve been exposed to David and his support system and his positivity and it ultimately weighs on what I do for a living,” Duncan said.

Though the two have had hard moments, with Duncan having to deliver bad news to David several times, both men describe their relationship as fulfilling. Duncan became an orthopedic trauma surgeon because he wanted to help people who didn’t choose their circumstances to thrive.

Working with Boothe has reaffirmed that his work has the power to do just that.

Aside from the mental and communal power that sports have to heal, Duncan said sports could literally help Boothe recover.

“I’m so glad to hear … that the Suns games and the local success right now is motivating him even further,” Duncan said, “because there’s so much to these injuries that’s not just physical, but also psychological, and any degree of support and excitement and hope is going to ultimately end up being positive.”

One factor that helps Boothe stay inspired is Williams’ story. The coach’s wife, Ingrid, was killed in a car crash five years ago and he called her death the darkest part of his life. Boothe believes if he sat down with Williams, the two would agree that the hard parts don’t define someone’s life.

For Boothe, instead of pain defining this part of his life, the Suns’ playoffs run will.

“I’m always going to have these two events linked in my mind: when I lost my leg and what happened and the Suns’ unbelievable run in the finals,” Boothe said. “Such a sense of relief that there are going to be good memories associated with this time period.”

David said the hardest thing he’s ever done is not jump for joy when Ayton caught the in-bounds pass from Jae Crowder. He hopes the Suns will give him another reason to resist jumping for joy by winning the NBA Finals.