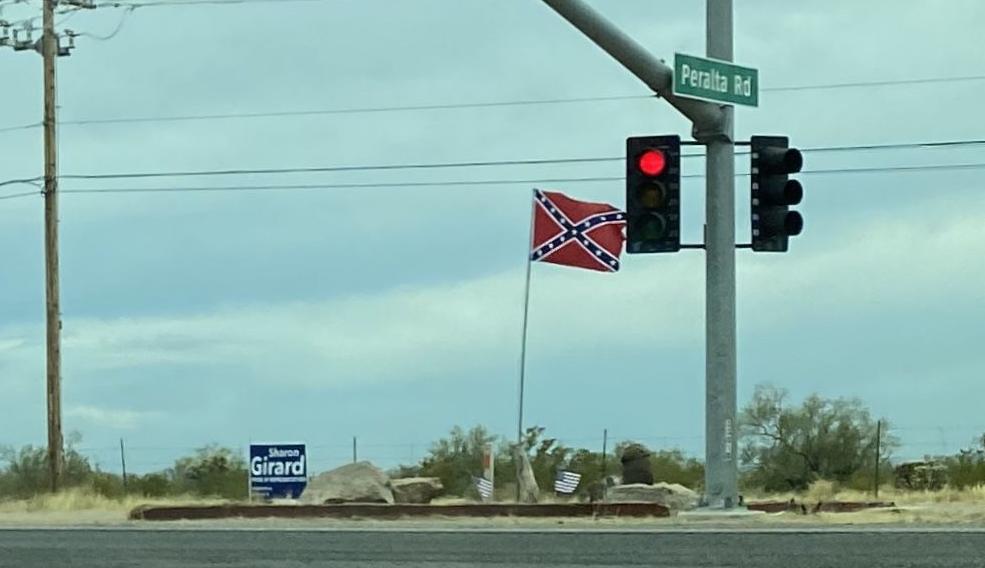 The Confederate flag appears at Peralta Trail and U.S. 60 on July 23. It was later removed. 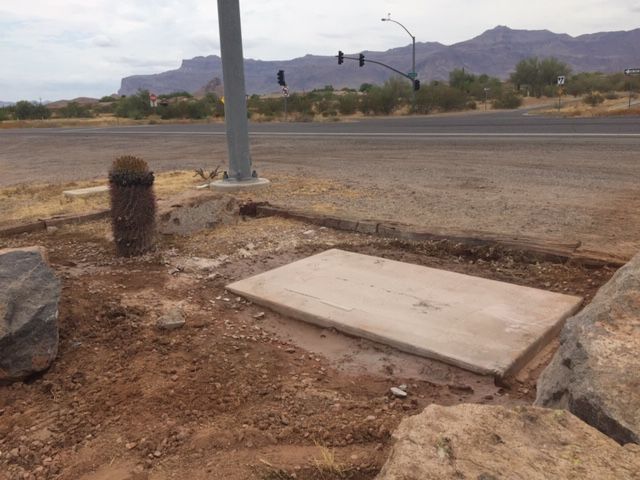 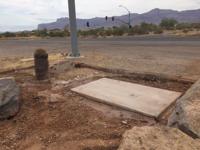 A marker proclaiming “the Jefferson Davis Highway” on U.S. 60 in Gold Canyon was removed July 23 after almost 60 years in place.

The Confederate flag appears at Peralta Trail and U.S. 60 on July 23. It was later removed.

A marker proclaiming “the Jefferson Davis Highway” on U.S. 60 in Gold Canyon was removed July 23 after almost 60 years in place.

GOLD CANY0N — A Confederate monument along U.S. 60 was removed Thursday — but someone, somewhere, apparently misses it.

Not long after the monument to “the Jefferson Davis Highway” was removed at the intersection of U.S. Highway 60 and Peralta Trail, a large Confederate flag was flying at the spot. Even with the monument gone, “the ideology behind these symbols … lives on,” David Coward of Gold Canyon commented by email to PinalCentral.

He said the flag apparently flew for at least a few hours before it was noticed and taken down. Coward was an organizer of an event last month denouncing the highway marker as a symbol of racism. Jefferson Davis was president of the Confederate States of America.

Gov. Doug Ducey announced Wednesday that The United Daughters of the Confederacy had offered to take back the highway marker and another Confederate memorial across from the state Capitol.

Coward said this was welcome news. “I hope (the memorials) can be placed in a setting where context is given to why and how they came to be installed in the first place.”

Roberto Reveles of Gold Canyon called the removal of the Davis highway marker “a very satisfying decision.” He said he applied in 2017 to the State Board of Geographic and Historic Names to remove the marker and name that section of U.S. 60 in honor of Gov. Rose Mofford.

The board eventually approved his request early last year, but the Davis marker remained. Its removal was not considered to be within the board’s jurisdiction, Reveles commented by email.

The marker is believed to have been placed in 1943 near the Arizona-New Mexico border on the highway currently known as U.S. 70. It was moved around 1961 to the current site of Gold Canyon, Coward said.

Reveles said it was “an undocumented transfer facilitated by Arizona’s Department of Transportation” and “a cloudy transaction that itself would be an interesting topic for exploration by an inquisitive reporter.”

Reveles said within a couple of hours of the monument being removed Thursday, a large Confederate flag was flying over the empty concrete slab.

“Again, I returned to the site and was comforted to note that the metal pole on which the Confederate flag had been raised was lying on the ground and no flag was around. Hopefully this closes the chapter on the unwanted Confederate flag in our public space.”

In an email to neighbors, resident Betty Kay said the empty monument site will continue to be a gathering place to decry “racism, police brutality, income disparity and a myriad of other issues that confront our nation and our democracy at this time. Please come join Peralta Trails residents next Wednesday at 8 a.m. at the former monument site.”

Kay said demonstrations would continue on the last Wednesday of every month until the November election.

“We will wave signs urging people to vote, wear masks and support racial justice,” she said.

PHOENIX (AP) — Two Confederate monuments on Arizona state property, including one at the Cap…

Ducey: Confederate monuments in Pinal and at Capitol to go

PHOENIX — New pressure is building on Gov. Doug Ducey to reverse his defense of having monum…

PHOENIX — Gov. Doug Ducey’s assertions that he has no role in deciding the future of four Co…