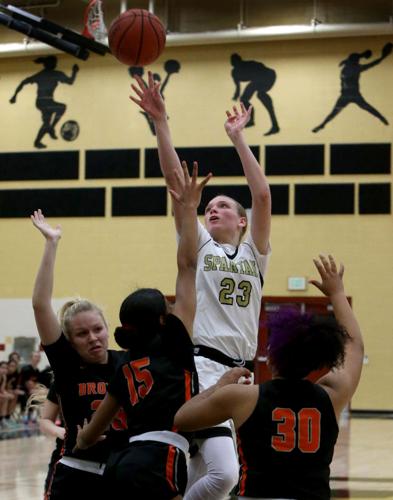 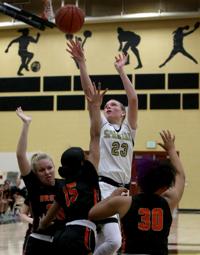 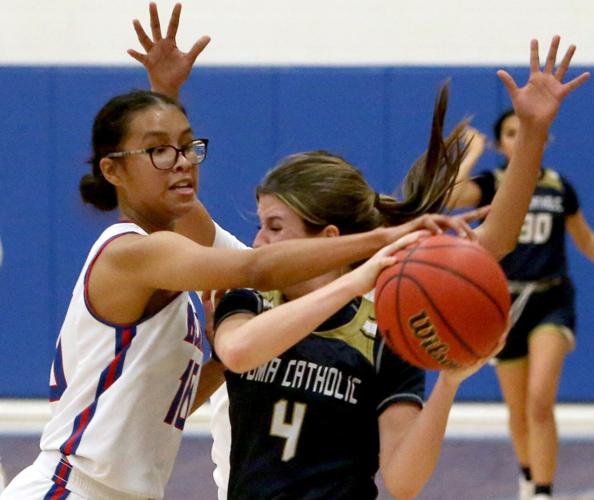 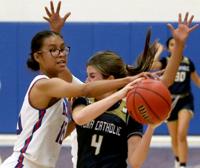 Coolidge’s Brooklyn Pablo gets her hand on a ball held by Yuma Catholic’s Reese Sellers on Tuesday, Feb. 15, 2022 during the first round of the 3A Conference playoffs. 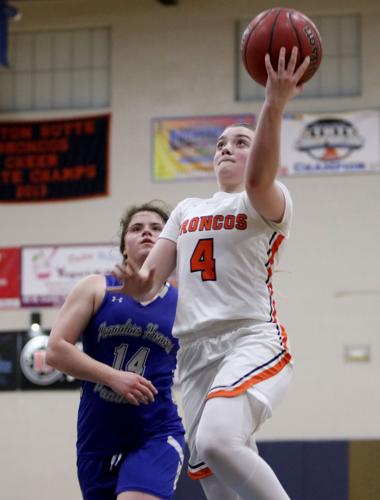 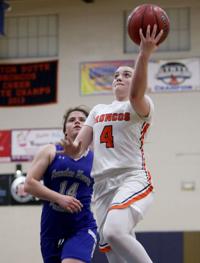 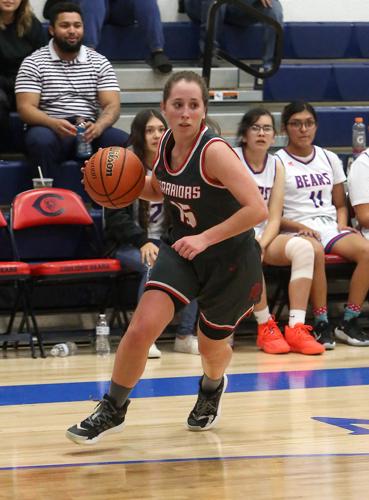 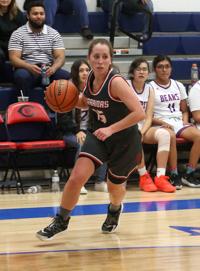 ALA-Ironwood's Loanee Billion against Coolidge on Monday, Jan. 31, 2022 at Coolidge. 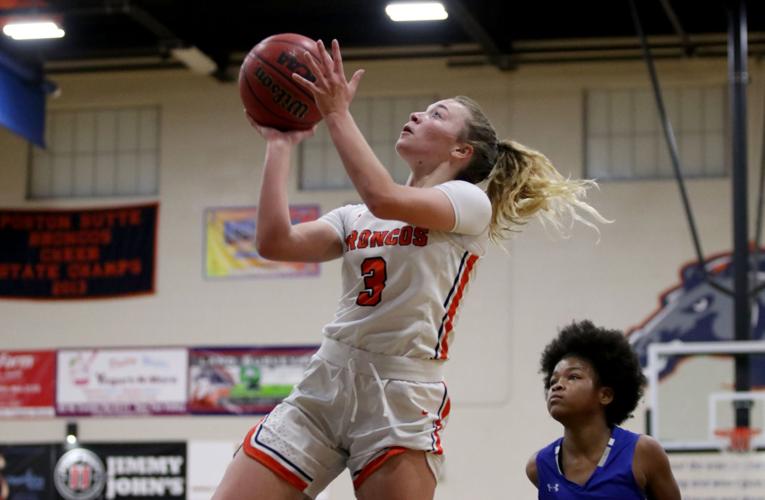 Coolidge’s Brooklyn Pablo gets her hand on a ball held by Yuma Catholic’s Reese Sellers on Tuesday, Feb. 15, 2022 during the first round of the 3A Conference playoffs.

ALA-Ironwood's Loanee Billion against Coolidge on Monday, Jan. 31, 2022 at Coolidge.

CASA GRANDE — While some new faces made a splash in the Pinal County girls basketball scene this year, it is two well established seniors who had a tremendous impact on on their individual programs that take the top honors in this year’s all-county team.

Scott, the 4A Black Canyon Region Player of the Year, finished in among the top 10 players in the whole state in three categories: points per game (20.9), free throws (65% shooting) and blocks per game (4). She also came in 14th in rebounds per game with 12.2.

To go along with her 1,312 career points scored, Scott finished with 653 rebounds and 238 blocks. Fans will have the opportunity to follow her college career as she recently signed with Central Arizona College.

Scott played a pivotal role for Vista Grande throughout her career and the same can be said about the runner-up for Player of the Year in Brooklyn Pablo.

Pablo was also named Region Player of the Year, but for the 3A South Central region.

She averaged 17.9 points per game this year and rounded out the top 25 list in scoring in the state. She was also ranked 12th in three point shooting with 62%.

Billon took the Warriors by storm this year as a transfer from France and was named the Offensive Player of the Year in the 3A South Central region.

The sophomore averaged an eye-opening 24.5 points per game. She also averaged 6.3 rebounds and 4.9 steals a game.

In her lone season for the Warriors she racked up 343 points and shot 61% from the free throw line. Listed at 5-foot-5, she gabbed 88 total rebounds and 68 steals.

Like Billion, Swanson is also a transfer, but she arrived at Poston Butte from Show Low.

The Broncos had their best season in program history as they won their first playoff game. Swanson was named the Offensive Player of the Year in the 4A Black Canyon region as she averaged 9.6 points, 3.4 rebounds and 3.5 steals a game.

Her teammate, Bachman, was the Defensive Player of the Year in the Black Canyon region.

Bachman led the way for the Broncos offensively with 13.7 points per game. While Poston Butte had a lot of depth this year, the junior managed to lead the way with 114 steals and also finished in the top three in rebounds.

Shedd was Vista Grande’s back-up weapon to Scott as she was second in nearly every category. The senior scored 12.9 points per game, 7.8 rebounds and 1.9 assists.

Over the past two years, Badger really found her footing with the Broncos. In her final season she led the team in rebounding with 5.3 per game and assists (2.7).

Helaina Bachman was a force inside the paint as she trailed Badger in rebounds with 114. The junior posted 186 total points and 67 steals.

White was the second leading scorer for the Bears with 9.8 points per game and tied with Pablo for the lead in rebounds per game but led the way in totals with 189.

For the Coyotes, Byaus was the focal point of their offense as she led the way in scoring, rebounding, steals and blocks. The senior capped of her career at Combs with 846 points, 859 rebounds, 202 steals and 170 blocks.

See below the complete all-county team, including honorable mention selections.

Maria Vasquez is the Sports Editor for PinalCentral. She can be reached at mvasquez@pinalcentral.com.