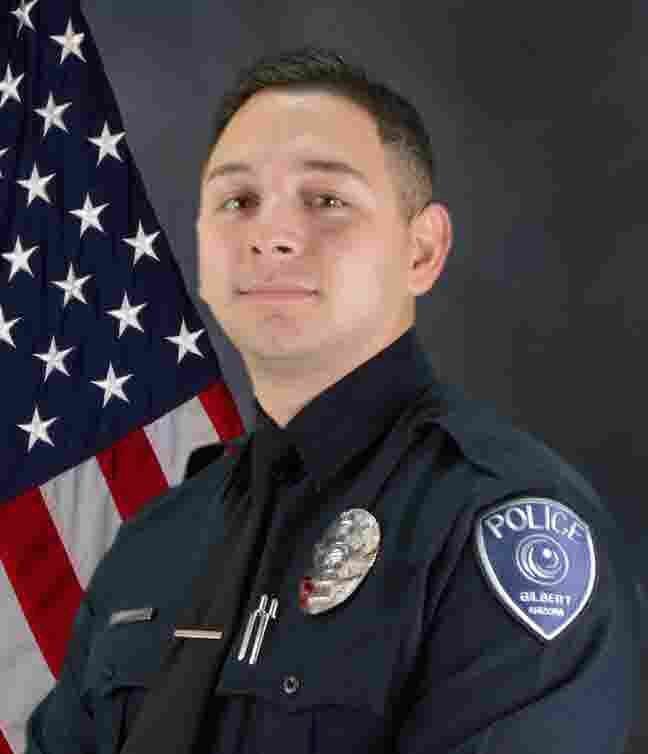 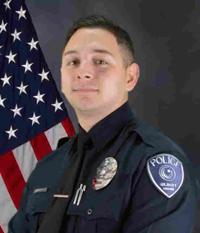 GILBERT — A suspect in a stolen car struck and killed one police officer and critically injured another during a wild chase that involved multiple law enforcement agencies in Pinal and Maricopa counties, authorities said Friday.

“Chris was struck and killed by a violent felon in a stolen vehicle following a multi-agency shooting and pursuit,” Chandler Police Chief Sean Duggan said Friday.

Farrar had served on the force for 18 years and was currently part of the K-9 unit. His numerous commendations over the years included the Medal of Honor in 2004, the Community Service Award in 2009 and four Lifesaving Awards, Chandler police said.

Aranda, who has been with his department since July 2018, remained in critical but stable condition Friday and has shown signs of improvement, Gilbert police said in a statement.

The suspect stole a vehicle and tried to drive away from a Ford dealership as four state troopers and three Pinal County Sheriff's Office deputies fired at him, Gilbert police said.

The suspect, whose identity was not released, was taken into custody and transported to a hospital with injuries that are not considered life-threatening, Gilbert police said.

Details on his injuries weren't released. Chandler police described him as a “violent felon” but didn't provide any additional details.

Along with the two officers struck by the vehicle driven by the fleeing suspect, a dealership janitor was struck and left with minor injuries and three troopers also had minor injuries, Gilbert police said. It wasn't clear how the troopers were injured.

Gilbert police and Pinal Sheriff Mark Lamb said the pursuit began about 10 p.m. Thursday when a sheriff's deputy tried to pull over a speeding vehicle on State Route 87 north of Eloy and then reported he had been shot at.

The pursuit went into Chandler in metro Phoenix, where the suspect got onto a freeway before driving into the municipal airport and crashing through a gate, causing the airport to shut down temporarily, Gilbert police said.

The suspect then got back on the freeway and drove the wrong way, going into Gilbert, where he crashed the vehicle near the Val Vista Boulevard ramp and then ran into the SanTan Motorplex, police said.

The suspect then stole a vehicle from the Ford dealership there, striking the officers and employee as the suspect tried to drive away shortly before midnight, Gilbert police said.

The Chandler Officer, Gilbert Officer, three DPS Troopers and the dealership employee were all injured and transported to the hospital. Farrar later died as a result of his injuries. The Gilbert Police Officer suffered a severe head injury and is currently in critical condition. The three DPS Troopers received non-life-threatening injuries, and the dealership employee received minor injuries, according to PCSO.

Gilbert police said they were still actively processing the crime scene Friday afternoon and had no additional information to release.

The slain officer had touched many lives during his 18 years on the force, Duggan said.

“I just ask that you keep Chris's family in your thoughts and prayers, and take a moment and be mindful of the brave men and women who are out there daily helping keep our communities safe,” the chief said.

“Officer Farrar was a hero through and through, and his commitment to protecting Arizonans was unwavering. My sincerest condolences go to Officer Farrar’s loved ones, the Chandler Police Department, and the entire law enforcement community during this difficult time,” Ducey said in a statement.

The Gilbert Police Leadership Association announced it has created a GoFundMe account in Officer Aranda’s name.

Numerous Pinal I-10 pursuits in March

Funeral on Saturday for Chandler policeman who died on duty

CHANDLER (AP) — A funeral service is scheduled Saturday for a Chandler police officer who was fatally struck by a suspect in a stolen car last week.